People On The Pitch #2, Wales vs Scotland, European Championships Qualifier, 22/10/1966

Today we go back to a simpler time in football, a time filled with gentleman and happy children and when pitch invasions had more of an innocent, joyous vibe to them before becoming sinister in the 1970’s. One of the most famous early pitch invasions from this time was of course at the World Cup ’66 final between England and West Germany, when Kenneth Wolstenholme uttered the very same name of this feature.

But here we focus on a game from a few months later between the top two nations of the island of Great Britain (and indeed the United Kingdom), Wales and Scotland. The game in Cardiff was both a Euro ’68 qualifier and a British Home Championship ’66/’67 game, as in a move that would definitely not happen today UEFA had ingeniously decided to combine this and the following ’67/’68 edition as the UK teams Euro qualifying group. As an interesting side note, because of this you can see some of the same games listed differently depending on which competition you’re looking it, as Northern Ireland was called as such in UEFA competitions but still referred to as “Ireland” sometimes in a UK context.

But enough of that nonsense, on to the big match you say. As it was the first fixture in the group anticipation was high and from the very first shot we can see some materials being thrown towards the Ninian Park pitch:

The earlier referenced Wolstenholme is again on commentary and mentions early that the two teams are wearing black armbands to commemorate the Aberfan disaster, which had only happened the day before a half an hour away. There were 144 deaths in the hellish catastrophe… 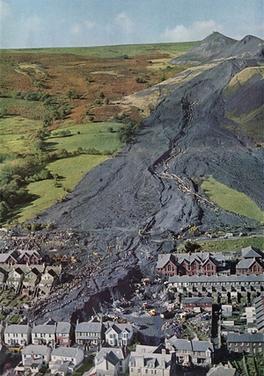 …and it is an incident well worth a look in to for those fascinated by the dark edge of the poorly regulated 20th century world, of which football was a part. If such a disaster happened today the game would nearly definitely have been called off and Wolstenholme comments on how the crowd isn’t as high as it might have been as “alot of people in Wales have no heart for football today.” As this is said and a minutes silence is about to take place, a car casually drives down the sideline as if it’s the most natural thing in the world:

Finally on to the game itself and at certain points we can see that plenty more paper-like material has been thrown from the crowd, creating a nice messy look: Some of the easily removable, larger bits are just left there, perhaps considered a natural extra obstacle to challenge the players rather than something that shouldn’t be there, as we’d see with pyro in later decades: It was a chilly, wet day and smartly some fans would refrain from throwing their newspapers on to the pitch and instead use them as a sort of make shift hat. Fashionable? No. Practical? I mean I can’t imagine news paper keeping you warm and dry but it was all they had back then: And then on 76 minutes, yes, he’s scored, a goal for Wales. Instantly a string of youths begin pouring out of the crowd in raptures, mining disasters now the last thing on their minds:

This triggers a spontaneous encroachment from all sides of the ground as Wolstenholme exclaims “I’ve never seen such an invasion!”, displaying the innocence of the time:

He soon begins to worry that “if the Welsh fans soon don’t get off the park they might well see the game abandoned.” Eventually the pitch is cleared and the game goes on with the Welsh in good spirits. But that is not all, as in the 86th minute the Scots scramble in a goal to equalise and not to be outdone, a pitch invasion follows from the visiting supporters. From the below gif we can see that it is not just youths as an older, balder gentleman can be seen cumbersomely making his way out of the enclosure and over to congratulate the players. Who knows how much whiskey had been consumed that day to propel this excursion of ecstasy:

This invasion isn’t as big as that of the hosts of course but some energetic supporters even make it past the half way line: The game ends 1-1 and we have the third and final pitch invasion of the day. As we leave the scene, Wolstenholme describes how “hundreds stream on to the pitch…impossible for the players to shake hands with each other, they just got to run for safety”.