***For a fine Belfast battle covered in our previous edition of People on the Pitch, click here.*** It was to be beautifully dull and dreary 1978 day in Lancashire for the Division Two derby between Blackpool and Blackburn Rovers, also known as the derby of two teams who have “black” in their name where neither wear black. The ‘burn’ part of Blackburn means stream and the ‘pool’ part of Blackpool means pool, so both names are descriptive of dark water features. The rain and mud for the match would therefore be appropriate, along with the sparsely covered, windswept terraces which stood as an appropriately unglamorous poster child for everything that was glorious about old school football.

The two towns are separated by Preston in the middle (along with some classically named English places such as Ashton-On-Ribble) and Preston North End are in fact Blackpool’s main local enemies. This rivalry apparently started in the quaint 1950’s with quaint arguments over whether Stanley Matthews was better than Tom Finney, but had sinisterly evolved by May ’78 (a sinister time) to the stabbing and death of a Preston fan during clashes between supporters of the two clubs at a Vibrators gig (a popular musical variety troop of the day).

The rivalry with Blackburn progressed similarly. In the simpler days of quaintness, the crowds at football matches looked very different to what you would soon come to expect of the terraces. This is evident by a 1960 crowd shot of Blackpool’s Bloomfield Road at a game against Blackburn where we see a selection of respectable gentleman, and even ladies, standing happily and politely: But “the quaint” was already dead when the two sides met at the same venue eight years later. It is well known that the 1966 World Cup final, when some people were on the pitch, single handedly robbed the innocence from English supporter culture and unleashed a sort of demon that would writhe uncontrollably for the next few decades, and while most people associate hooliganism with the 70’s and 80’s, there were already many in the late 60s who were going to games not for the football. This was certainly the case for the Blackburn supporter(s) who threw ammonia at the Blackpool Spion Kop during an October 1968 game sending several people to hospital. Further incidents occurred after the match outside the ground and the events of the day were deemed “alarming and frightening developments” in football hooliganism.

The demographic of football supporters at games changed drastically over the coming years as the presence of disaffected youth at games grew and the stern, calming older crowd phased themselves out as society evolved. It soon became commonplace for large mobs to rove through the open terraces and increasingly onto the pitch in search of adventure, mischief, trying to get games called off when their side was losing, and fighting each other. But like at the World Cup ’66 final, and the Wales-Scotland game the same year that we covered in People On The Pitch #2, some pitch invasions were just spontaneous expressions of pure joy. While our featured match contains just that rather than poisonous terrorist attacks, it also does a good job of highlighting the normality of supporter disobedience at the time.

On commentary it is noted there are 12,500 in attendance on this wet afternoon:

The first shot we get from the game shows the aforementioned Spion Kop end of Bloomfield Road. The home Blackpool supporters are on the left; visiting Blackburn supporters on the right. Although you wouldn’t know it from the footage, a roof covered a large part of the terrace further back up which may explain the open spaces at the front of the Blackpool section on this rainy day. Presumably the ammonia incident from ten years earlier hadn’t been forgotten, but enough that the two sets of fans don’t seem particularly interested in each other (although we’re sure there was plenty of unreported activity beyond our limited footage): 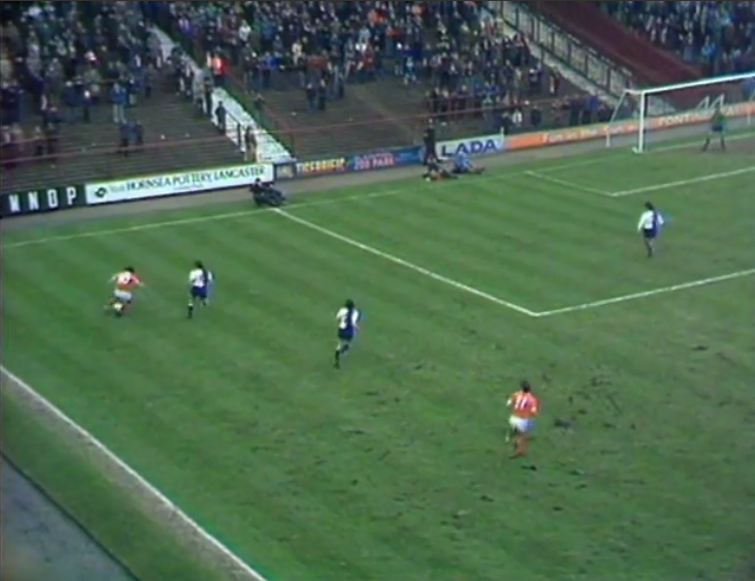 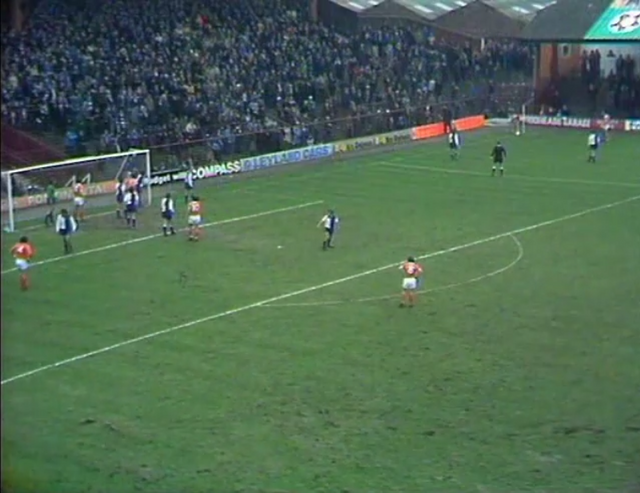 Here some young away fans watch from the corner of their section: 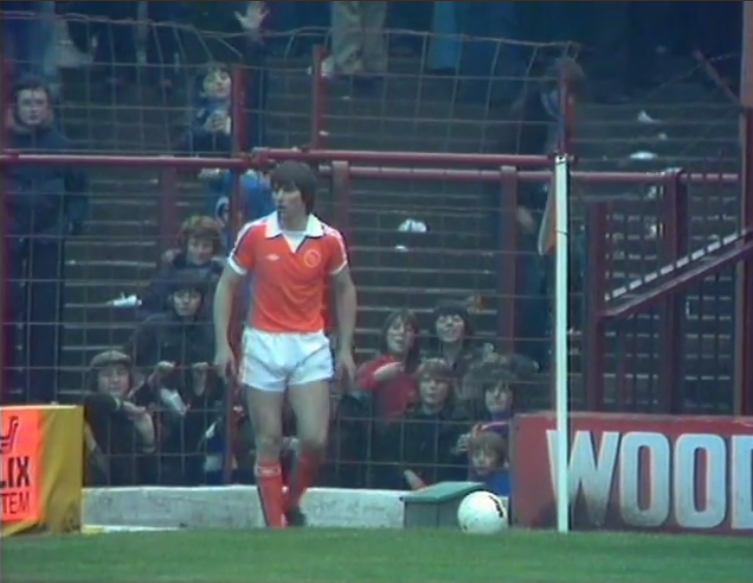 The first of many goals for the day, Blackpool score early on (a fine goal but since this website isn’t about the actual football, we refuse to comment on that). But the main thing here to observe is the activity in the Blackburn section, as we see a mini surge:

After more Blackpool goals, we get nice looks at the elated abandon of some young terrace goers in the background as the players celebrate:

There are also some interesting things to note around the side of the pitch. By the corner of the ground in the Kop end there is an alphabet: A magnificent photo of Blackpool playing on front of a packed Kop in the 60’s shows that the alphabet corner in existence then, and probably for many years before that. Thanks to reader Nicholas Young, among a couple of others, for supplying this perfectly logical reason for the letters:

I think the letters in front of the Kop are for giving out half-time scores. The back of that match program would give that days fixtures a corresponding letter. Then at half time man in white coats would come out and put the scores next to each letter. They used to do the same thing at Everton. In the days when all the games kicked of at 3pm on a Saturday and PAs didn’t work very well.

In the other corner of the same end we get something even better in the form of a series of luminous orange posters, advertising something called Klix System. This seems like a very modern name for a 1978 company, suggesting some sort of time travel back and forth between then and 2001. A copper dutifully stands guard: A Google search reveals that Klix remains in existence today as a successful vending machine company, who in fact still use the same font style for their logo as in 1978. Eccentric billionaire Mr Klix himself probably still laughs to himself reminiscing about the old, amateur adverting posters, which just appear as a confusing orange blur when the camera pans across that section of the ground.

But enough about unfinished alphabets and enduring vending machine companies, you’re here for some people on the goddamn pitch. By half time, Blackpool were 3-0 up and the onslaught would continued as they shot into the Bloomfield Road South Stand in the second half. Unlike the Kop, the South Stand did not feature a containment fence at this time: 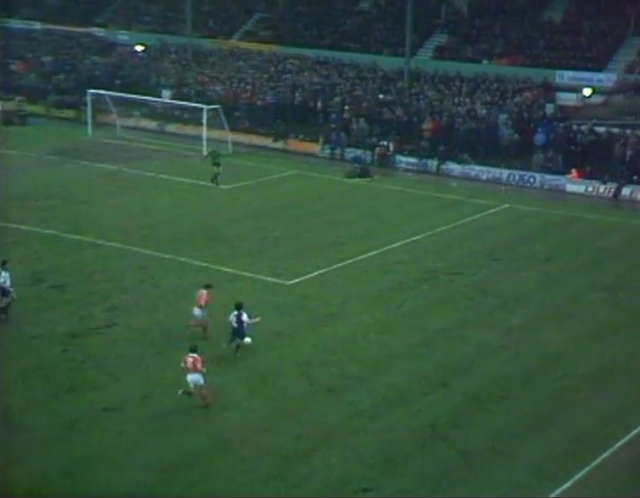 The rain level also increased, as shown by the desertion of the front of the Kop:

As striker Bob Hatton scores his and his side’s fourth, and victory is all but assured, some eager young supporters take advantage of the fencelessness of the South Stand. We only get a brief, split second of this in the footage (as if a split-second could be anything but brief, unless you’re on acid), but we get definite person-to-grass contact:

You’d probably feel robbed if this was all there was here, but of course there’s more. Hatton scores what he and the crowd think is his fifth, but, after the celebrations die down, it’s ruled out for handball during the buildup:

Blackburn pull one back to make it 4-1 and offer some glimmer of hope to their traveling support. This triggers some heroic scenes on the terrace including a one young man in a beige trench coat who immediately turns and sprints back up towards his colleagues:

But soon afterwards Blackpool were on the offensive again and score number five to put the game beyond doubt. This time the South Stand supporters are poised to stream on en masse, or should we say POOL on (as in Blackpool), as soon as the goal goes in and do so with striking ease: 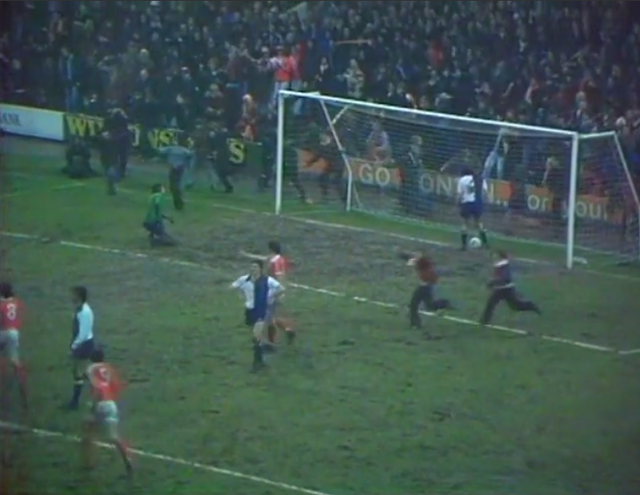 We’re not going to say that this was in the days before kids had video games and smart phones and such, because that’s obvious. But in a time before easy entertainment and general coddlement, moments like this perhaps meant something different. Just look at that joy from the lad on the left, bless (plus he’s got a nice coat on which to be fair probably also brought joy): Blackburn would pull another one back through a late penalty before the game finished 5-2 to the hosts. “Revenge for ammonia!” some may or may not have shouted, even though they had already played each other ten times since then. With countless episodes like the above at many games, ranging from innocent to devilish in spirit, it is no wonder that soon containment fences would be implemented fully in most grounds in the Football League. But not everywhere, as we shall see in a future installment.

The main thing we took away from this game is how good it would have felt for both players and supporters to get home and into a hot bath or shower. The thought reoccurred several times in fact. This would have been waiting for the players of course as soon as they entered the dressing room. But then, imagining yourself a supporter, we realised with horror that this was in the days before people had power showers, or even smart phones to ring someone at home to turn on your water heating.