Last time out we continued our streak of different manufacturers (Erima, Puma, Reebok, Adidas, Umbro, Admiral, Le Coq Sportif) with this sleek and stylish French number. Now, sticking with long sleeves, for the first time we have a repeat maker as like in Retro Shirt Reviews #4 we once again look at an Adidas creation, but this time with the trefoil very much visible to the naked eye (and ingest your magic mushrooms now in preparation for a great International Selection at the end). 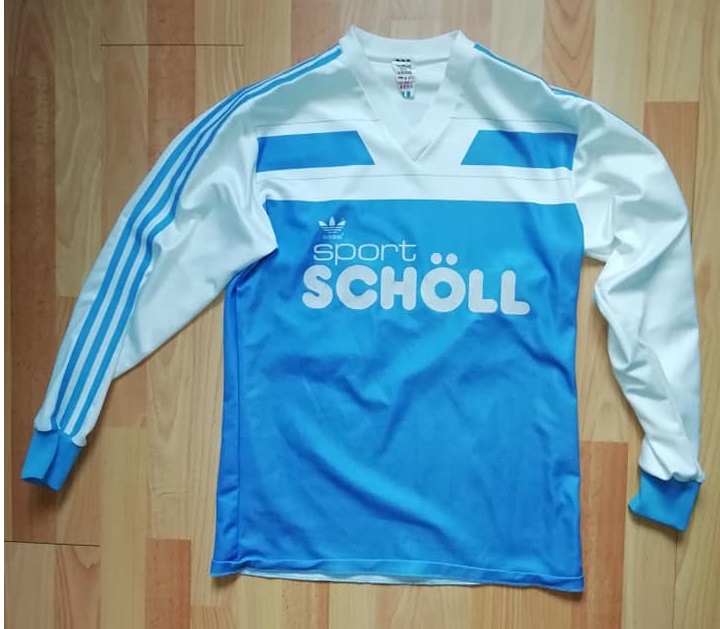 Here we have another masterpiece of the early to mid 80s: a sky blue torso that nearly becomes blue-lilac in person, with two corresponding panels above which are sandwiched between dual horizontal pinstripes, accompanied by a v-neck wrap-over collar, blue cuffs, and of course, sleeve stripes. 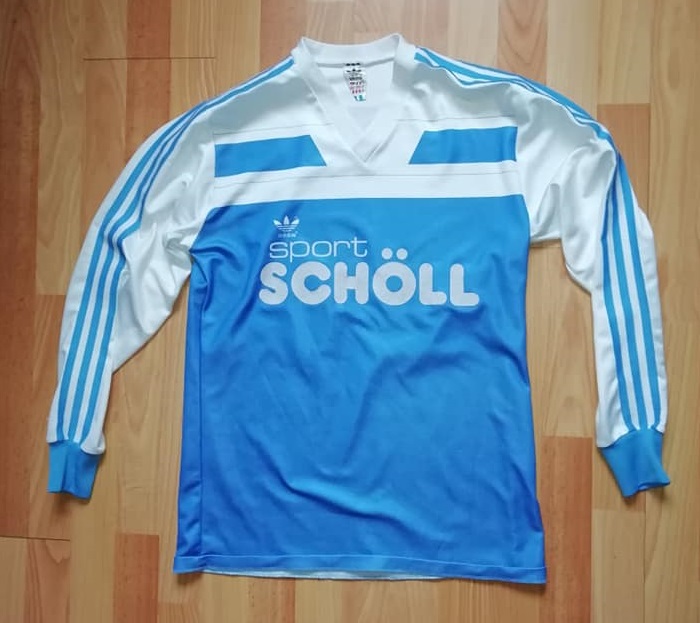 The felt-pressed sponsor, Sport Schöll, translates to “Sport Celandine” in German, a celandine being type of a plant. However we are guessing in cases like this it’s used as another word for school, rather than the usual “schule”.

The chest area is the highlight though, reminiscent of the horizontal motifs used by the likes of Schalke in 1983 and Nantes in 1984, but more minimal than both. This sectioning means that the trefoil is slightly lower than you’d expect on an Adidas shirt: 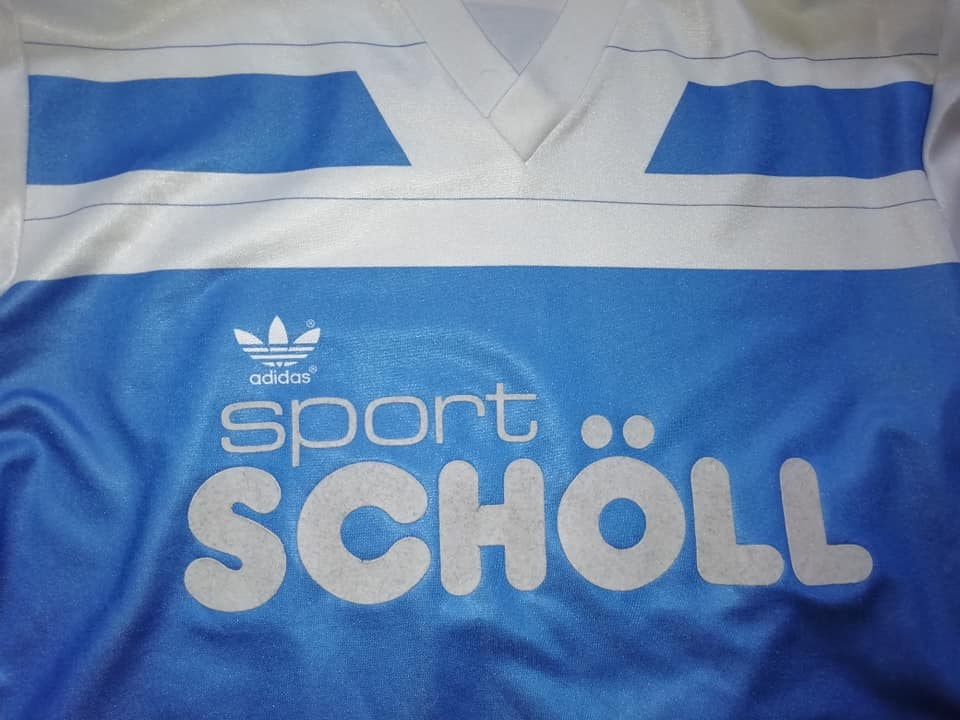 Giving a clue to the era of the jersey, the trefoil itself is the version with two “slits” going through the line in the middle, which for a period since around 1978 had sliced through the whole logo (on football gear at least). By 1985 Adidas were again starting to use the version with no slits, with most new shirts going forward from 1986 being “slitless”, so it seems our shirt can be from no later than 1986. 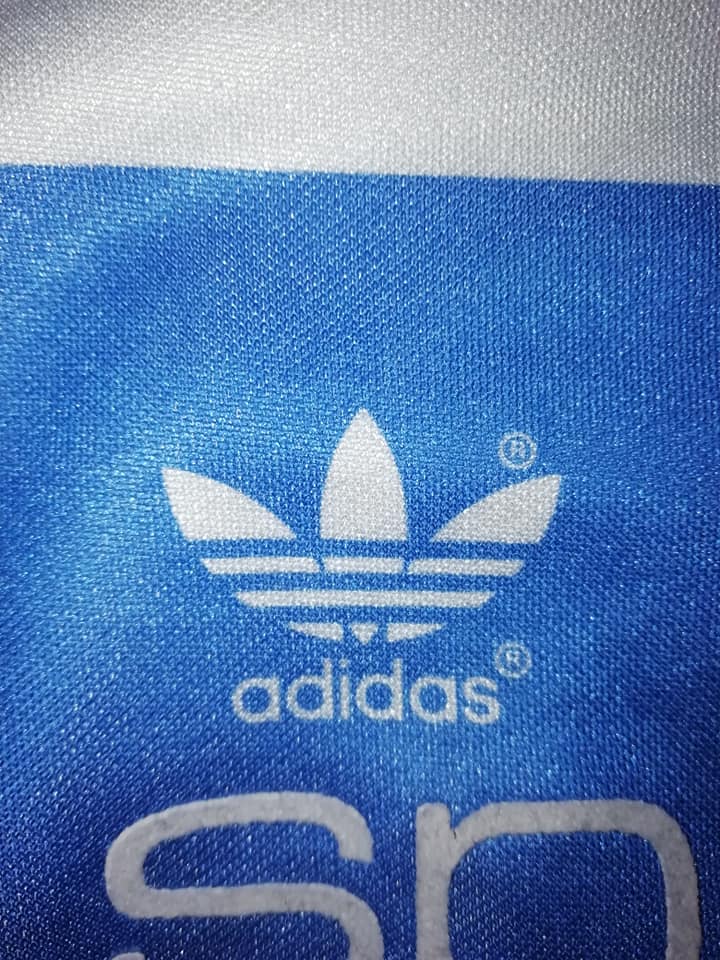 Another highlight are the excellent cuffs, not to mention that long-sleeves are always great. The stripes, as with all German made Adidas shirts of this time (as opposed to the French made Adidas Ventex which were differently manufactured), the three blue stripes and two white stripes are combined on their own, long solid pieces of materiel stitched over the rest of the jersey: 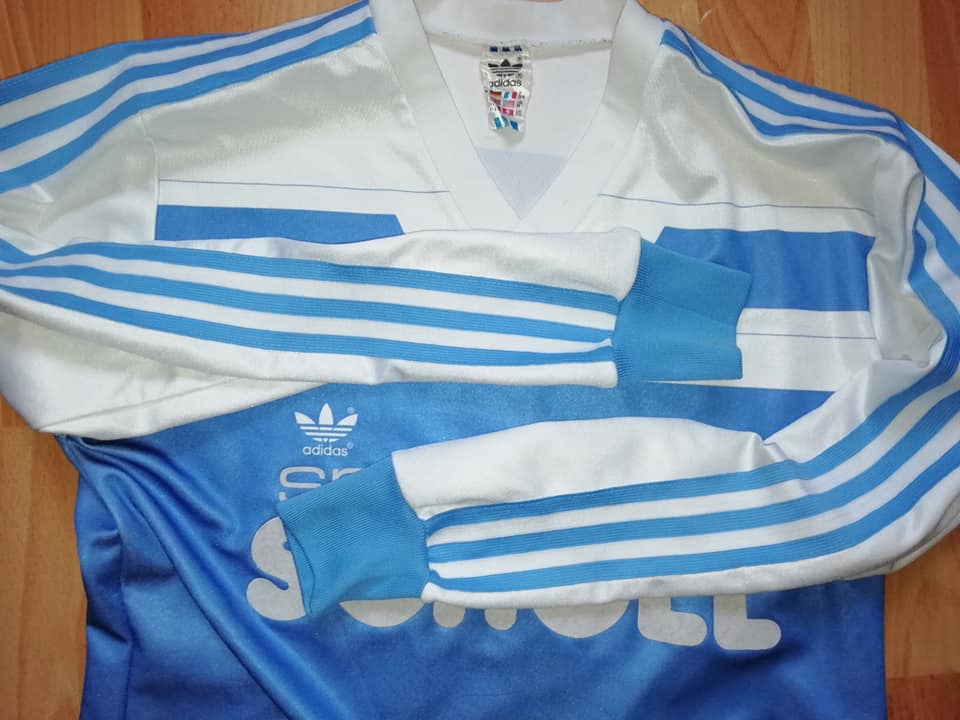 Unlike our Adidas shirt seen in RSR#4, the label shows that by this stage “Erima” had been removed, who were taken over by Adidas in the 70s and used as a branch to produce many Adidas kits. “Made in West Germany” does appear on the underside though, while the trefoil is in tact here unlike the version on the shirt: 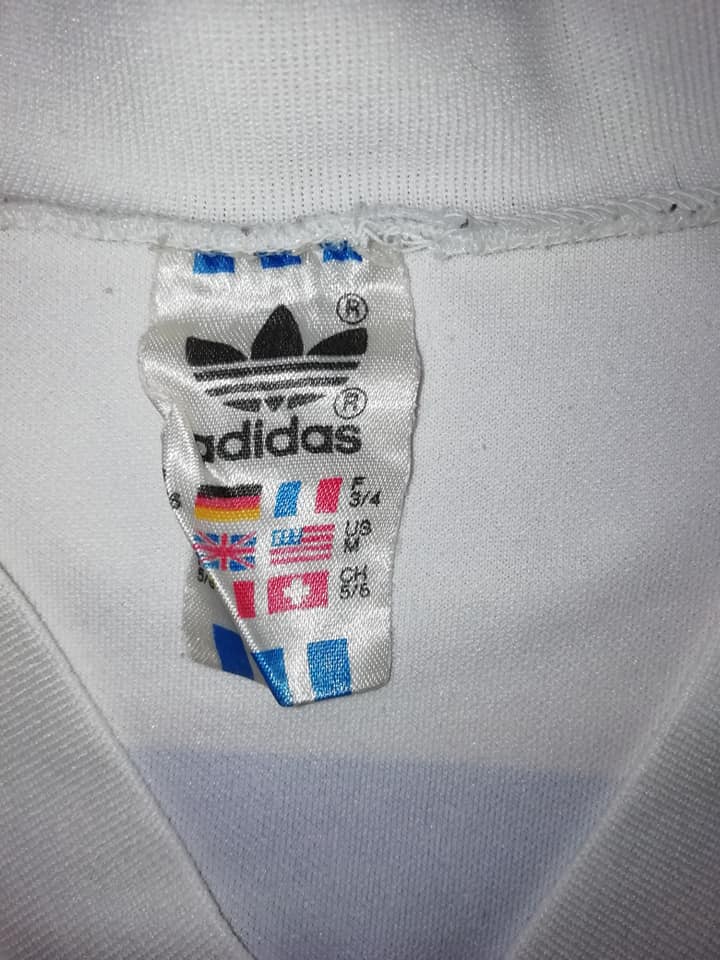 Lastly, as always, we look at the back, and the reason we know what team we are dealing with is revealed. The main body of blue is higher to make room for the word “Tischler” – German for “carpenter”. As we have seen before, it is a German tradition for team names to appear on the back of shirts and the name of course suggest an amatur company/union team, another common trait of the country. Below it is a beautiful box effect number 4: 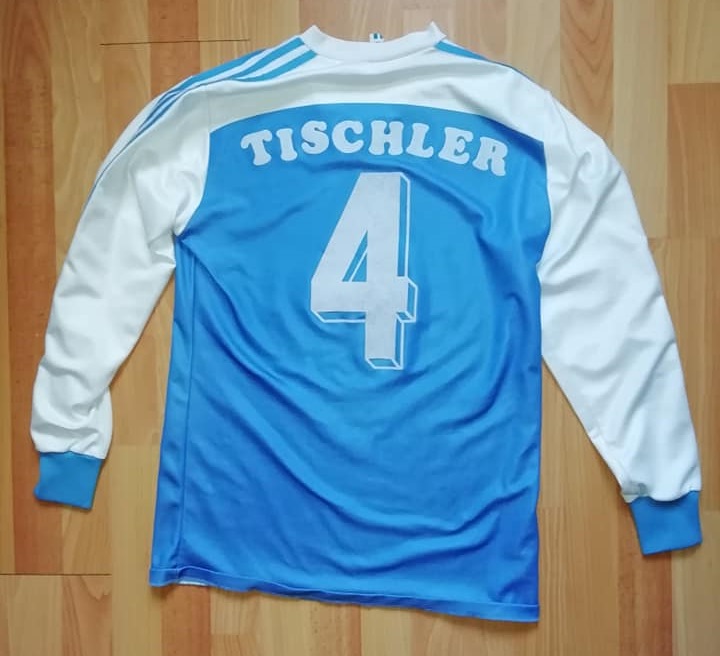 So concludes our review, a very solid template that we can’t seem to find evidence of being worn by anyone else. If you have examples, please get in touch by the usual channels.

Edit: We have since discovered at least one other team who wore the shirt – Luxembourg in 1986 as worn in their Euro 88 qualifying campaign, including when going 0-1 up in Lansdowne Road away to Ireland in September 1987 before ultimately losing 2-1.