Previously in Retro Shirt Reviews we released the originally Shelbourne-fanzine-exclusive RSR#7, taking a special look at that club’s less-documented kit past, but our last true instalment was RSR#9 with this mid-late 80s long-sleeve Adidas beaut. If you enjoyed that then you are in for a treat, as we now return with more historic wonders of the football kit-related variety. 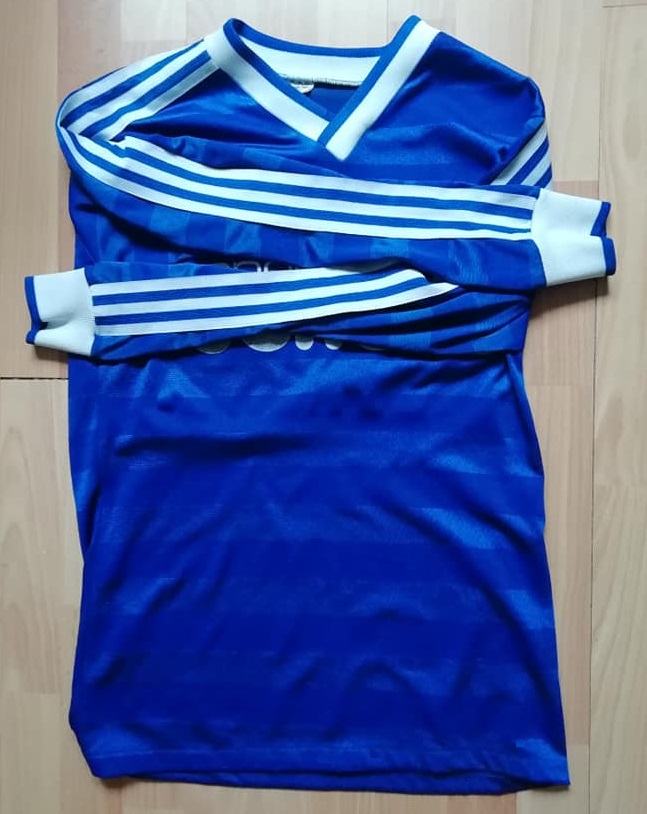 If the details listed above look familiar then you are correct, as this is another shirt from the same team that appeared in RSR#9. As is German tradition, the name of the club appears on the back above the number (sometimes seen below) to let us know that this another ‘Tischler’ jersey, which translates to carpenter or joiner. This is not even the first workers/union side of the sort that we have featured following the late-70s Adidas-Erima shirt (sadly sans the trefoil) from RSR#4, the large, amazing woodpecker-logo of which suggests a similar trade.

Unfolding the beautiful, long, three-striped sleeves, we can reveal that this is of course the Adidas “Aberdeen” template (which we all now know the name of, and some other classics, thanks to @TrueColoursKits), with it’s trademark horizontal shadow-stripes and matching collar’n’cuffs, popularly used at the time of it’s release: 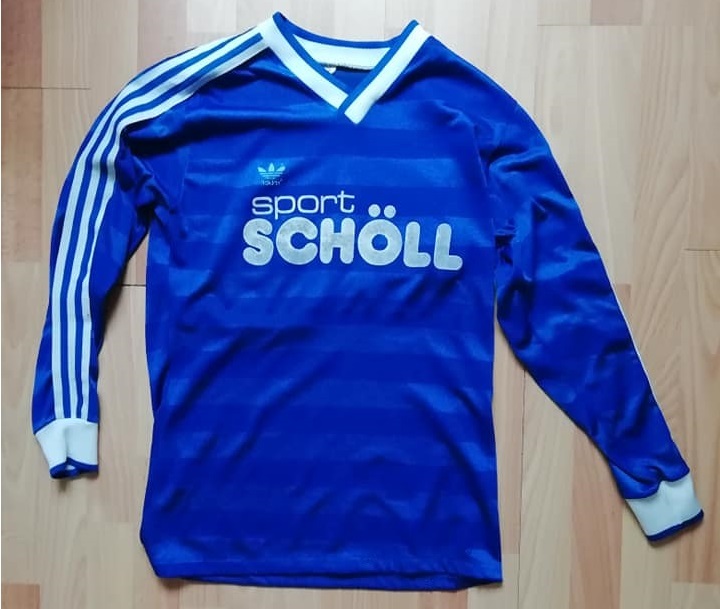 This means that we have gone back in time (as is our want) by having already highlighted Tischler’s next jersey after this in RSR#9, as the design was first seen (at least widely) employed by West Germany and Romania at Euro 84 (discussed in Football Special Report #7). Many club sides around the world and other internationals took on the simple but pleasing look over the next two years, in many different colourways, but the most obvious comparison to our version comes from Schalke 04’s 85/86 kit, that used an identical shirt apart from the sponsor.

As with it’s successor, the sponsor here is Sport Schöll, which we at first erroneously assumed meant Sports School (that would be “Sportschule“). But seemingly, Schöll is simply a family name and Sport Schöll appears to be a sports shop. The close-up also gives us a good look at that oh-so-nice shadow-striping: 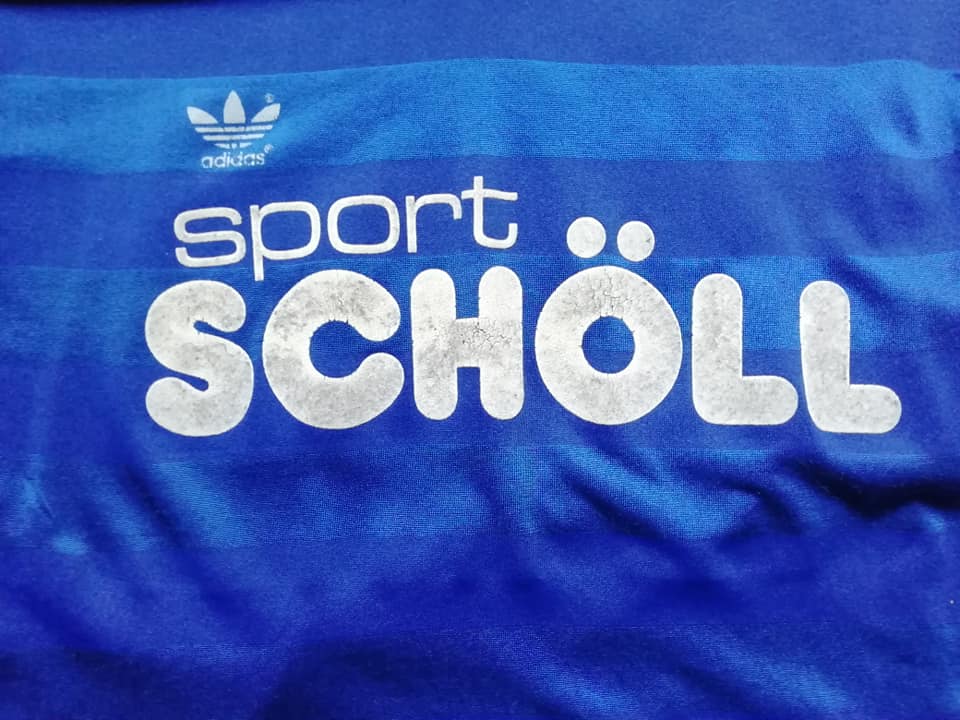 Zooming in even closer to the brand logo, we can see that unlike the later shirt, where they were sublimated, the ‘adidas’ and trefoil are printed on and beginning to fade. This was also of an era where the logo-to-wordmark ratio wasn’t what it would become, as the letters are slightly smaller than what you might expect, with the extra “slits” on the trefoil also indicating the early-mid 80s production: 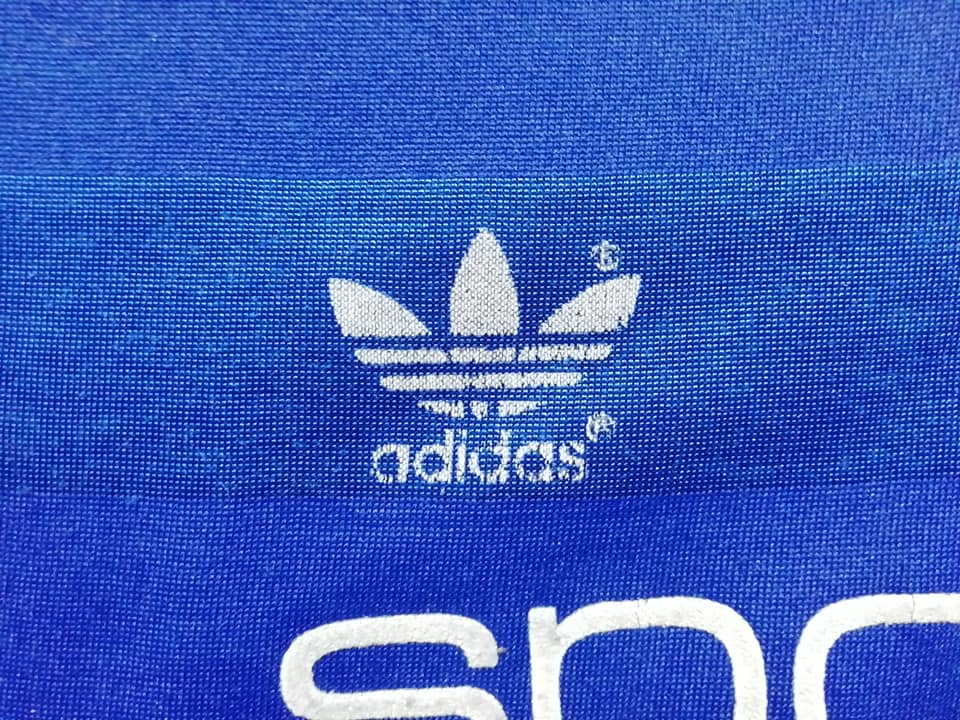 The other stand-out feature of this jersey, apart from the shadow-stripes, is the marvellous v-neck collar and matching cuffs, for which we are grateful to possess a long-sleeved version. As well as the iconic cross-over on the v-neck, the additional blue trim perfectly frames this sublime garment and makes the whole thing pop: 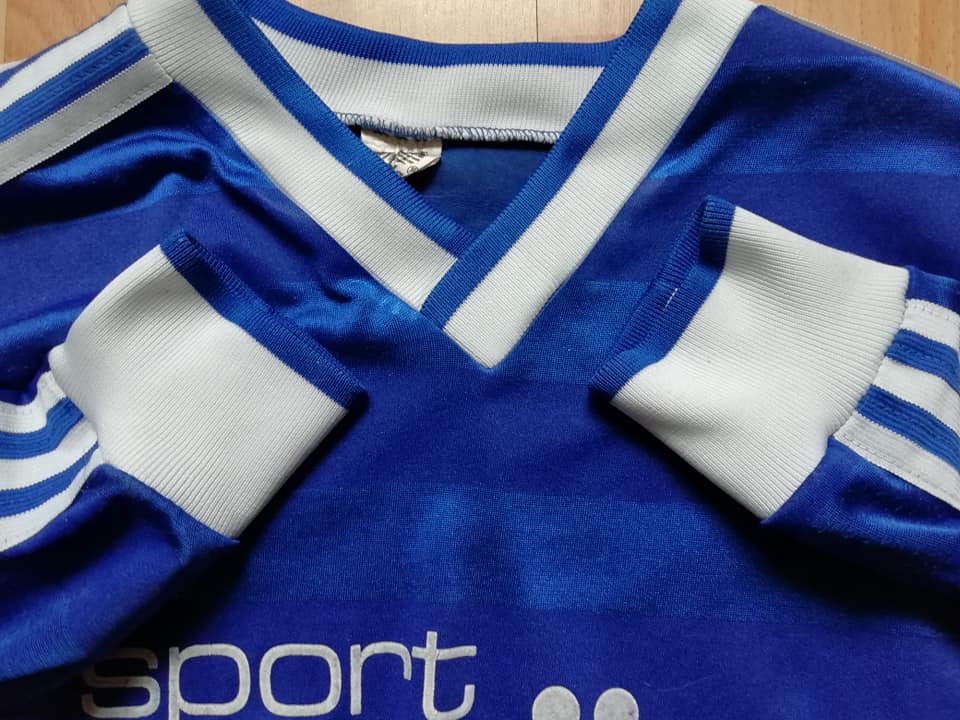 We have already mentioned the sleeve-stripes, but it is always worth re-iterating how great they look when given more length, for which we thank the elements of winter. The label, at which we also sometimes look at, is too creased to properly display, but it is the exact same as that which appeared on the other Tischler model.

Lastly, as usual, we turn over to the back. The same font for the name and the classy “box”-style number that would be seen on the 1986 shirt are already here, with the latter unfortunately not in the best condition. Still, this jersey is clearly a priceless artefact: 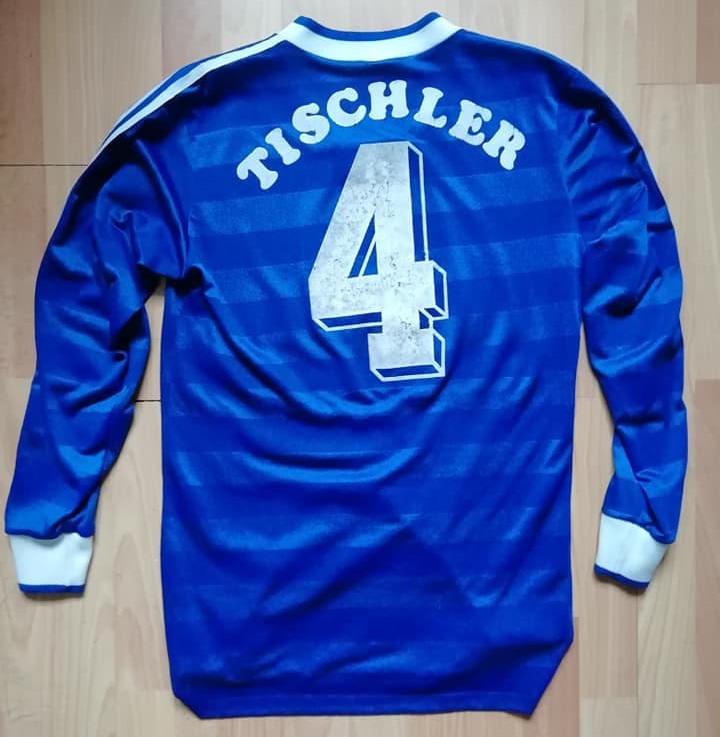