Last time out in People On The Pitch, we checked out a mass-confrontation at Coventry’s Highfield Road as Nottingham Forrest won the 1978 English league title. Previously we have gone back as far as 1966 in this series, with a Wales vs Scotland Euro 68 qualifier, but now we go back further still to the 1950s and a spicy “friendly” game in Belfast that was meant to be a World Cup qualifier. 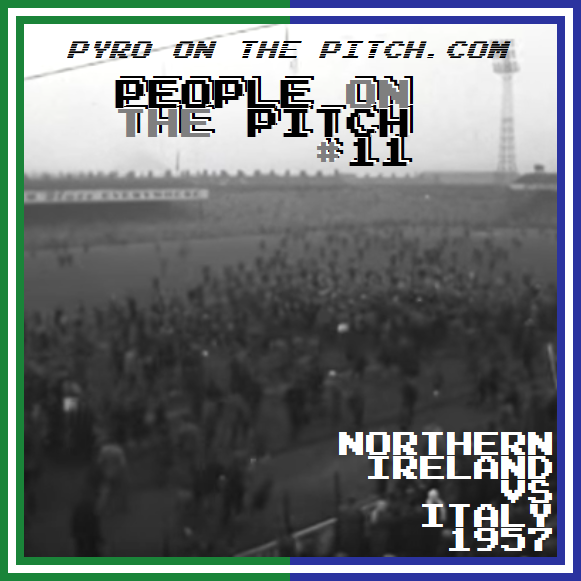 Following the lead of the first three football associations in the world – England (1863), Scotland (1873) and Wales (1876) – the Irish Football Association was founded in 1880 while the whole of the island of Ireland was still under British rule. In 1921, the Irish War of Independence, and resulting peace treaty, divided the country, with the majority of territory breaking away from the United Kingdom as the so-called Irish Free State in 1922, leaving the remaining north-eastern six counties to become Northern Ireland.

Following the split, the Football Association of Ireland (originally Football Association of the Irish Free State) was created to represent the new “Free Irish”, but both the Dublin-based FAI and Belfast-based IFA claimed to represent the entire island. In football terms there was no Northern Ireland, as the IFA Ireland team of 1880 continued as normal selecting players from both sides of the border, as did the Irish Free State from 1936. Both also wore green with shamrock crests, but at IFA games the English national anthem of God Save The King was played, while at FAI games an anthem glorifying the fight against the same king was proudly sang.

In 1937, the Irish Free State name was dropped in a new constitution, legally creating “Ireland”. Hence, there now was officially two Ireland teams, although one was a member of FIFA (FAI) and the other (IFA) on boycott, along with the rest of the UK nations following political disagreements. In 1946, however, the IFA and the rest did rejoin FIFA, meaning that the “two Irelands” would be present in the upcoming 1950 World Cup qualifiers for the first time, with several players amazingly turning out for both in the campaign.

The undeniably farcical situation forced FIFA to step in to make a clear distinction between the teams. In 1949, this was helped as the Irish had adopted another constitution in which the country was formally declared a republic (a move which alarmed British unionists who saw it as a potential threat to the existence of Northern Ireland), and while not the official name, the term “Republic of Ireland” was made legally acceptable as a national title.

The timing was perfect, as FIFA declared that the FAI’s team be known as the Republic of Ireland, and the IFA’s as Northern Ireland, and that both would stick to selecting players from within their borders (which would remain until 1994 when the Good Friday Agreement made it possible for players born in Northern Ireland to represent the Republic). The North also adopted the IFA’s Celtic cross as their badge; a somewhat ironic choice considering many of their supporters’ hatred for the Celtic culture and language of the “non-British” Irish.

One notable exception to the name was within the British Home Championship, where the IFA were still known as Ireland until 1971. During this time, when the 1953/54 and 66/67-67/68 editions doubled as World Cup and Euro qualifiers respectively (as 1949/50 had been for World Cup 50), the odd situation arose where “Ireland” would be playing in the British tournament and Northern Ireland in FIFA/UEFA competition, within the same match.

After having failed to qualify for 1950 and 54, Northern Ireland would participate in a non-British World Cup qualifying group for the first time in the next campaign. Placed in a tough Group 8 along with Italy and Portugal, each team were to play each other twice throughout 1957 with two points awarded for a win, and a spot at Sweden 1958 for whoever topped the group.

Involved in the first three games, the North started with the two tough away ties first; an encouraging draw was secured in Lisbon against Portugal in January, before a 1-0 defeat to Italy in Rome in April. On May 1st, a brilliant 3-0 home win over Portugal put Northern Ireland right back in contention, before the Portuguese’ own 3-0 victory over Italy later in the month really blew things wide open. The last games were scheduled for December, with the Italians set to visit Belfast on the 4th before finally hosting Portugal on the 22nd.

With Northern Ireland ready for their biggest international to date, an unexpected crisis struck the day before the game when Hungarian referee Istvan Zsolt was stranded in London due to dense fog. An English ref closer at hand was put on stand-by, but it was decided to wait and see if Zsolt, who was also manager of the Budapest Opera House, could make it the next day.

Meanwhile, the swarthy Italian team – who had already landed successfully – surveyed the sights, sounds and flavours of Belfast:

(The newsreel from which this is from, incidentally, opened with the caption “Irlanda vs Italia”, displaying that the “Northern” distinction was yet to be fully observed inside or outside of football)

But the aforementioned London fog didn’t give up, and it soon became too late for the back-up official to travel either. The IFA offered the Italians a local referee, which was understandably refused (presumably calling upon an FAI ref was out of the question). With the count-down to kick-off approaching, and with thousands of fans haven taken valuable half-days from shipyard work, it was decided that the match must go ahead, but as a friendly rather than a World Cup qualifier.

A huge crowd of over 50,000, who have only been informed of the match classification downgrade upon their arrival, pack into Windsor Park. With their half-days now “wasted” on a meaningless match, many disgruntled worker-supporters loudly voice their disapproval, although others are clearly happy to make the most of the day:

From a narrow gap between the terraces, the teams emerge. Despite the black and white footage, at least we can see that Northern Ireland’s green shirt is quite a dark shade, while Italy’s blue crew-neck is suitably stylish (click here for our Politics On The Pitch post explaining why these two and other nations wear colours not seen on their flags): 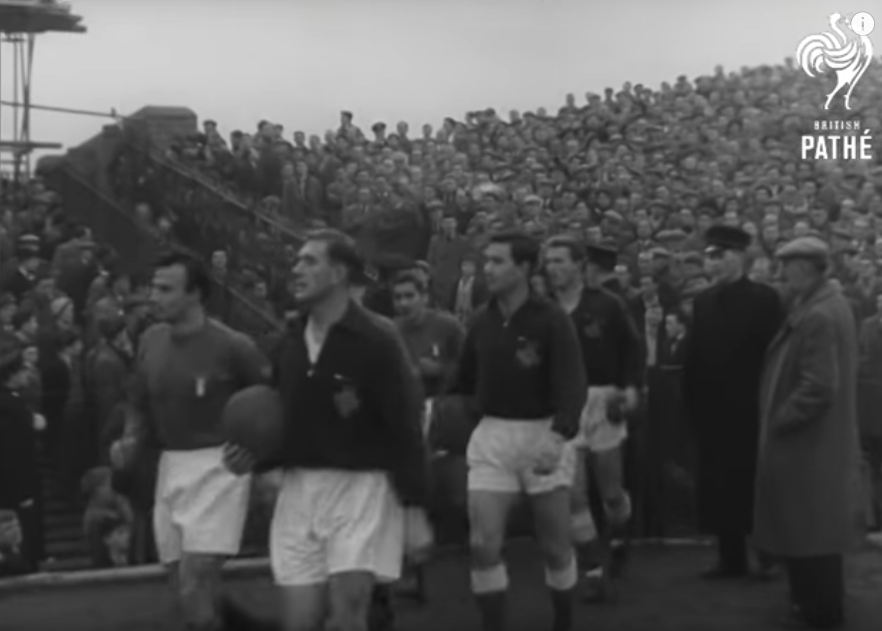 The booing and jeering from the crowd ceases for the national anthem, but resumes and drowns out the Italian anthem, much to the shock and horror of the away team:

A section of home supporters take their aggression to the camera also, with some choice gestures on show:

The captains and referee offer each a token sign of peace through handshakes…: 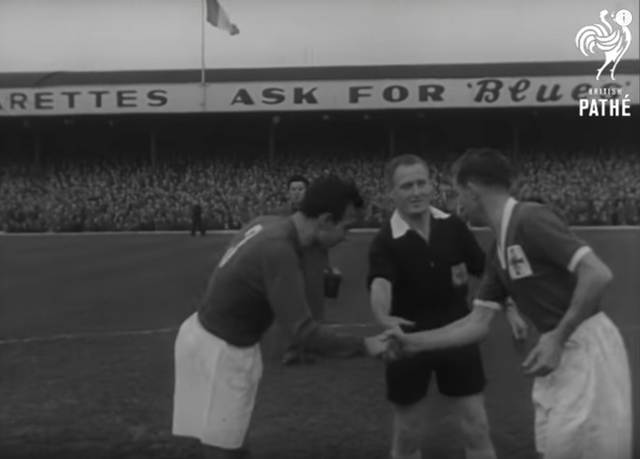 …but the negative vibes coming from the pissed-off fans has entered a feedback loop with the pissed-off visiting players, who’s memories of gentile strolls around the capital have now been erased by the perceived booing of their national anthem

Despite the meaningless of the game, the new found aggressive tension manifests in Giuseppe Chiappella punching Danny Blanchflower in the face off the ball, among other incidents, before brave Italian ‘keeper Ottavio Bugatti casually bares several knees to the head:

Of course this type of action is not too unusual for the time, but rarely ultimately due to a referee being stranded elsewhere. Speaking of archaic aspects, here we see the problem with certain types of goal-frames as the ball gets stuck on the roof of the net:

Going back to the disgruntled fans, the same group are still busy abusing the cameraman, but this time with less smiles, as if they are really serious now. One of the ringleaders has switched from the cut-throat sign seen earlier to an upward thrusting motion with fingers held together, which must be popular at this time:

A great camera shot from beside one of the goals displays the density of spectators crammed into the other sides of the famous, old ground:

Some have avoided the claustrophobic enclosures entirely by taking to the safety of the roofs, with classic ads for cigarettes beneath them: 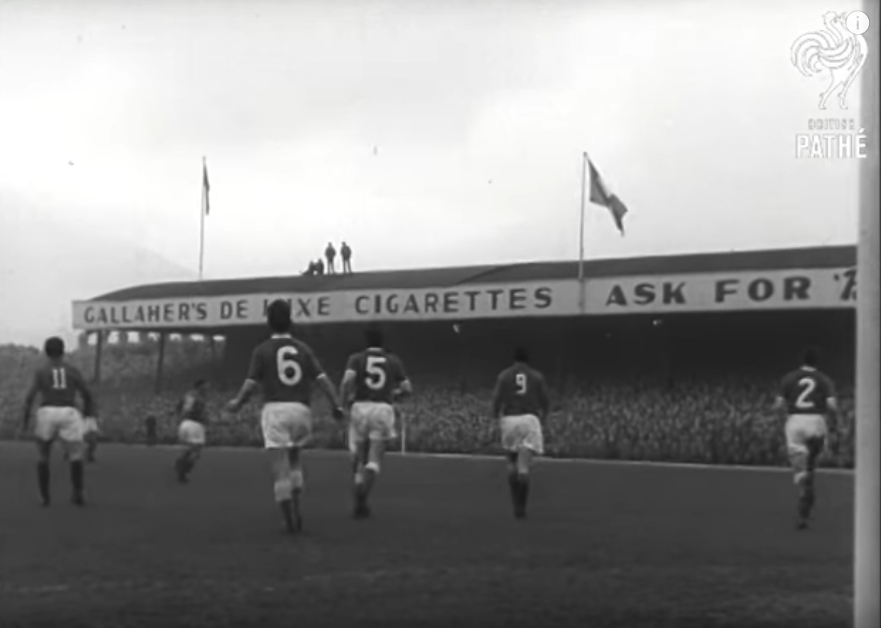 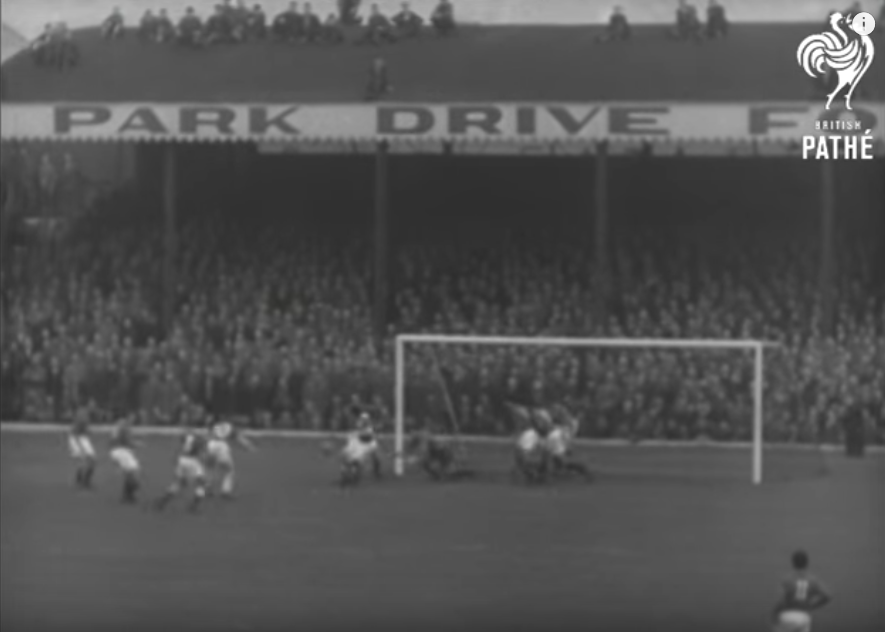 In the second half, poor Bugatti is subject to more ill-treatment as he is pushed to the ground for no apparent reason (while people casually walk across the roof), much to the appreciation of the crowd:

The disgruntled fans, meanwhile, have, if anything, become ever more disgruntled and are still furiously gesturing:

Throughout all this, several goals have been scored. On the hour mark, the fantastically named Wilbur Cush scores his second to make it 2-2, as the crowd gyrate with pleasure:

A while later, Bugatti is brutally hacked down once again as he collects the ball. The linesman in the background clearly sees no issue with the “challenge”:

This time the Italians have had enough, and a melee breaks out:

Shockingly, it is a player in blue who is dismissed by the referee

The fans are now even more riled up, and as the final whistle is blown many spill on the pitch, despite the efforts of a few policemen. Some go to congratulate their heroes for holding their pride in the match, while others have more sinister ambitions:

Before long, vast swathes of supporters are on the grass and the atmosphere is dangerous. Despite the violence of the game, some Northern Irish players begin to fear for their Italian counterparts safety, conscious of the terrifying and telling fact that a Belfast Celtic player was dragged into the terraces and suffered a broken leg at the hands of Linfield fans in the same ground ten years before: 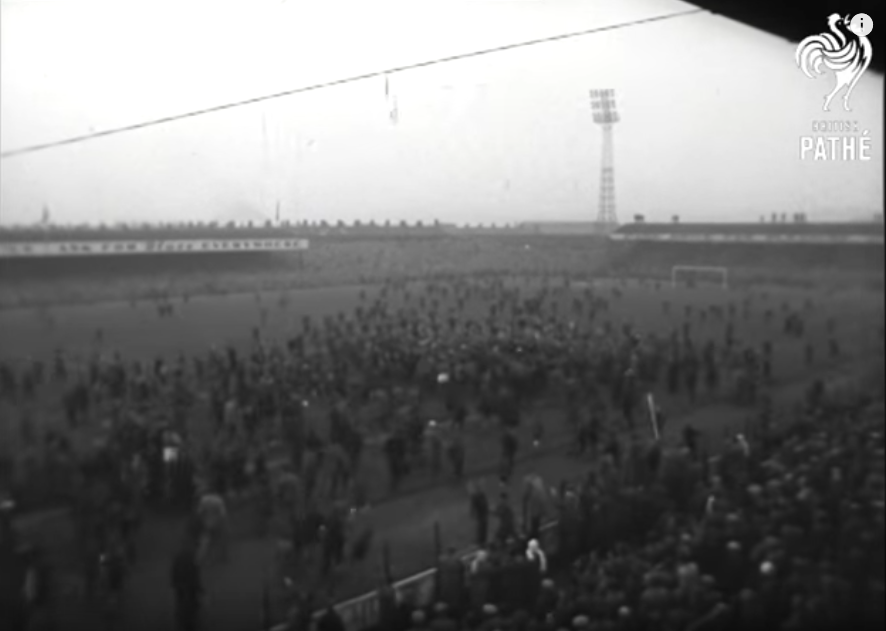 With at least one being carried, the Italian players were quickly ushered off the pitch and down the tunnel, away from the baying mob: 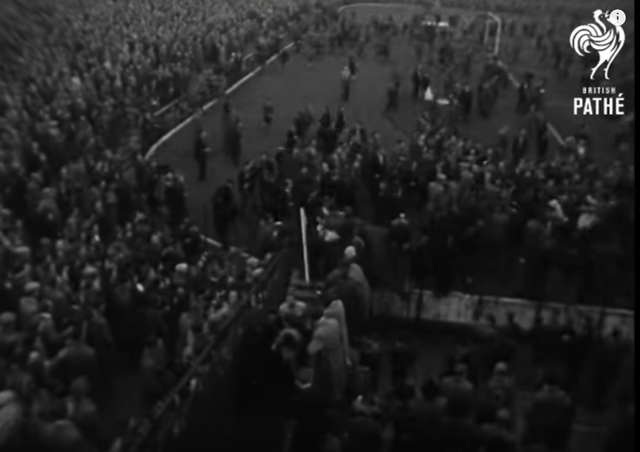 Some of the more bloodthirsty fans attempt to storm the dressing rooms too, but the Italians have made it to safety. Now to do the whole thing again for the rearranged fixture.

The game was quickly dubbed the “Battle of Belfast” by the media. Despite their escape, the Italian team received backlash upon arrival in their homefront as they were booed getting off the plane; the 2-2 draw would have meant elimination if the game had been competitive. 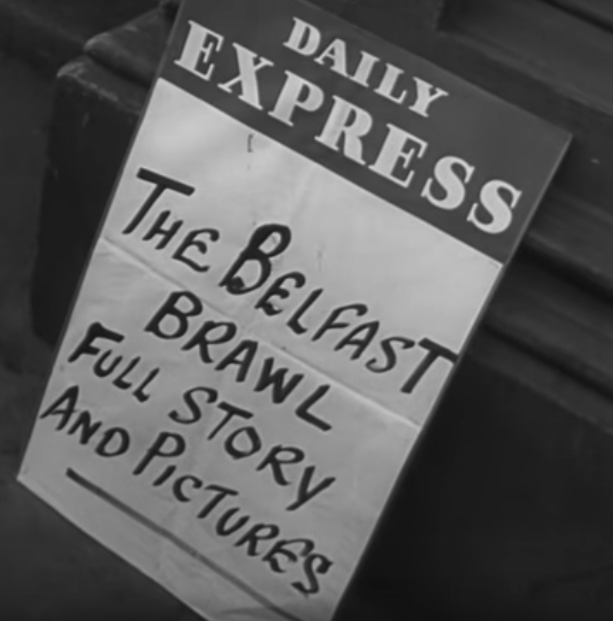 On January 15th, 1958, the game was replayed in Windsor Park, with the esteemed Mr Zsolt finally officiating. Wearing a fresh new kit and crest, Northern Ireland arrived on the pitch with British Pathé again informing us that this was “Ireland” playing, rather than a small portion of the island ruled-over from afar. This “Irish” side were in luck, as a 2-1 win meant that they would make it to their first World Cup that summer. The Italians may have wanted to stay in Belfast this time, rather than again face the ire of their countrymen upon returning from the match, as they missed out on their only finals until 2018. 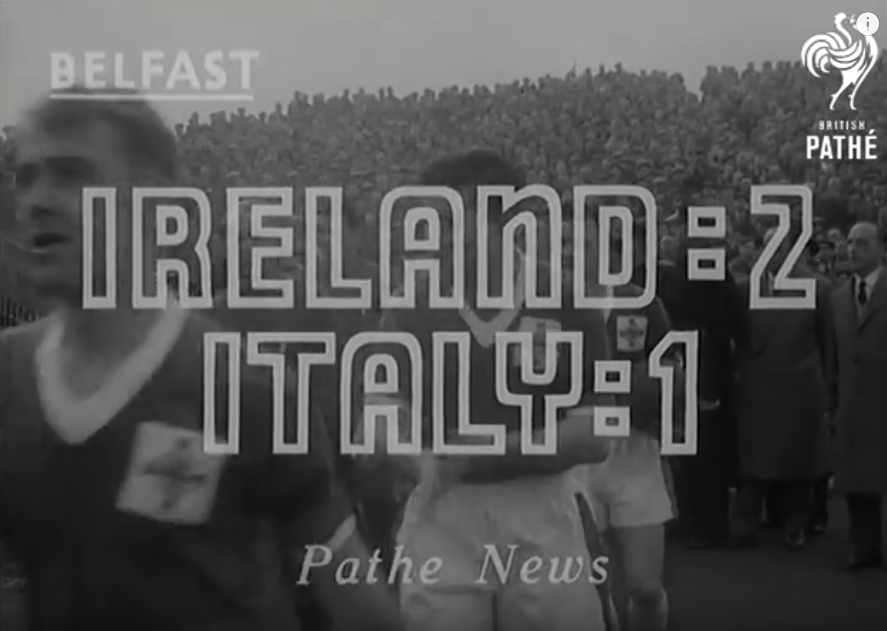