Last time in APMFVGFH we looked at the odd but lovable Libero Grande, which started life as an arcade game in 1997 before going to PlayStation. For this edition we rewind the clock back seven years further, when another unique and colourful football title was hitting Japanese arcades.

**Credit to the original YouTube uploaders playing the game: CheesestringXX and syndromtr** 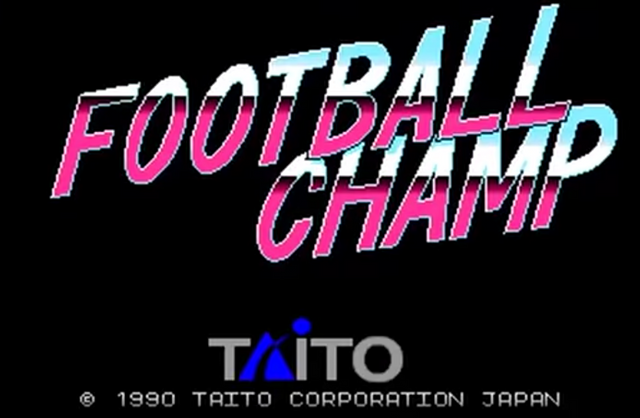 As you can see, the game for this installment is Taito‘s Football Champ, which debuted in arcades in 1990 before a version was adapted for Super Nintendo and Amiga. To give the image above it’s full presentation:

This intro graphic is followed by a nice team-select screen with the Maracana Stadium in the background. There are eight countries to choose from, after which one of four star players must be picked for your team:

Of course all these players have brilliant and hilarious faces, which smile when selected: 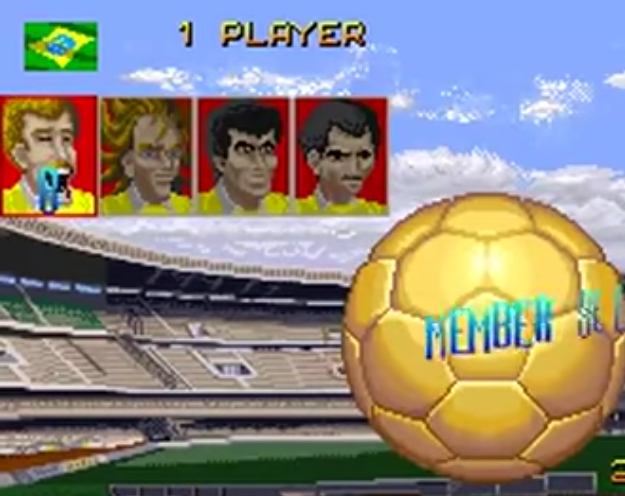 Heading to the gorgeously vivid match itself, the faces get even better when we see the commentators who are shown before kick-off (here between Brazil and France, we’re not even going to get into the wrong kit colours this time) and during crucial moments. One, who’s presumably meant to be Brazilian, looks like some sort of mutant-alien dressed as a human, and the other is vaguely, familiarly French: 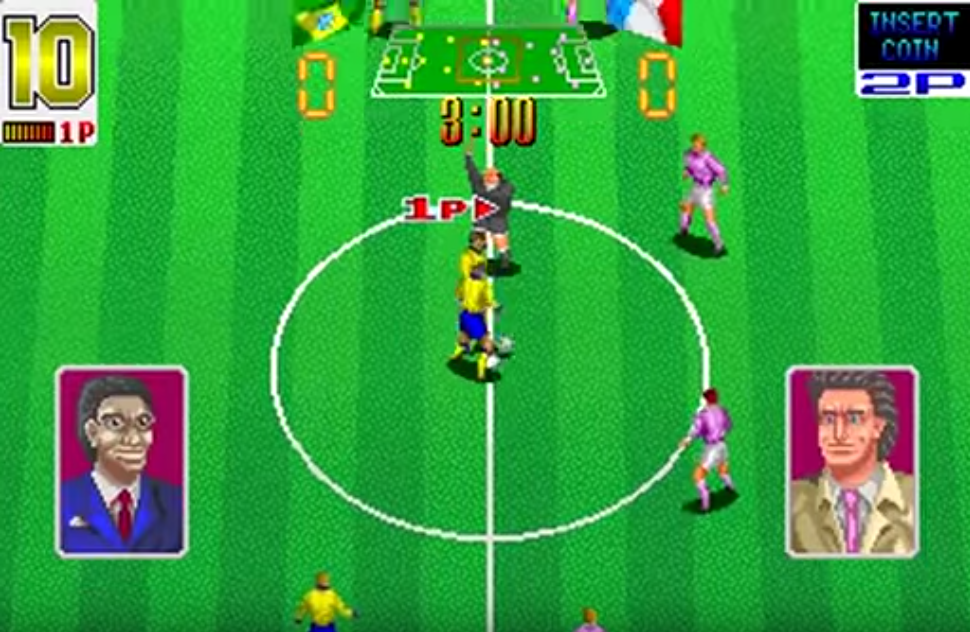 Some other nice details in a classic Japanese animation sort of way include the balding, rotund referee; a goalkeeper with excellent posture and a tiny waist; and photojournalists sitting next to the goal: 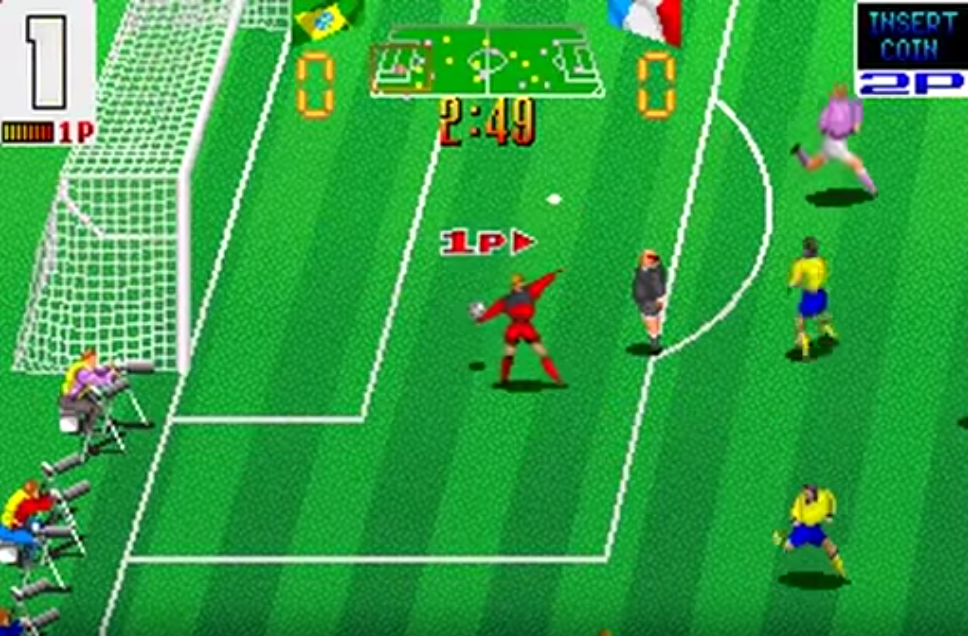 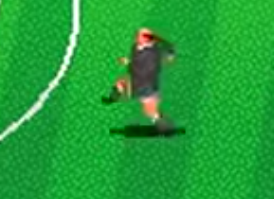 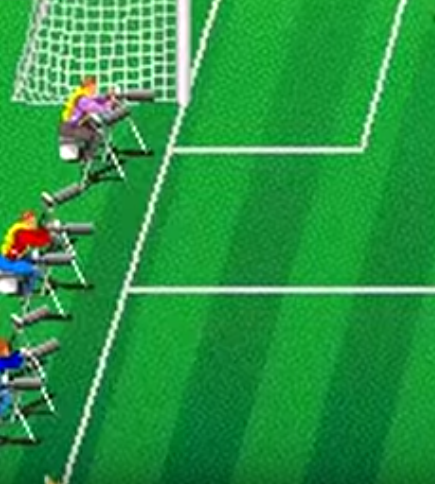 Checking out the photographers on the other side of the goal, it becomes clear that the pitch is surrounded by a running track and sponsors for hip, fake brands like “River” and “Logic”: 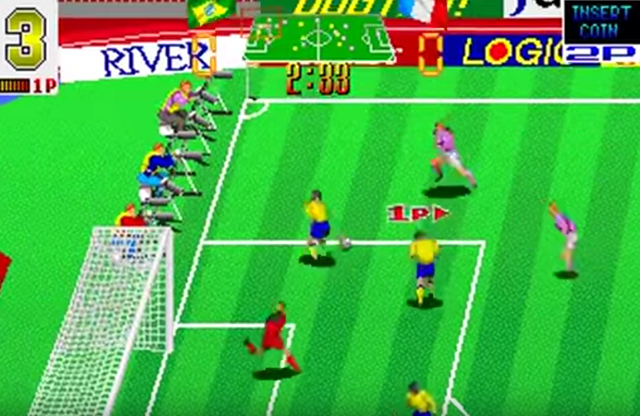 More on the hoardings and that area of the ground in general later. Another famous aspect of Football Champ is violence, with foul-moves very much fitting for the arcade such as this beautifully graceful flying knee: 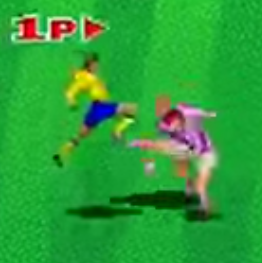 When a foul is committed the ref will issue yellow card, with a red coming after the third foul (by any player). That is, brilliantly, unless the ref hasn’t seen the incident (when he is off screen). In the case below where a nasty punch is delivered, he happens to be very much present (luckily, the victim channels Shawn Michaels in his quick recovery):

A while later, a penalty has been given for another punch (which to be honest looked outside the box to us). France attempt an unorthodox pass-penalty, but, to the commentator’s utter dismay, are then instantly granted another spot-kick with a red card for Brazil:

The player then proceeds to make an insanely long run back to his own half to leave the pitch, even though it is soon revealed that the tunnel is closer to where he has just been:

Having sprinted past own manager and team mates (who evidentially don’t have a bench and must stand all match on the track), it can clearly be seen that an exit could have easily been achieved far closer to where he was dismissed. The manager’s double face-palm may well be for his player’s idiocy, as much as being a man down: 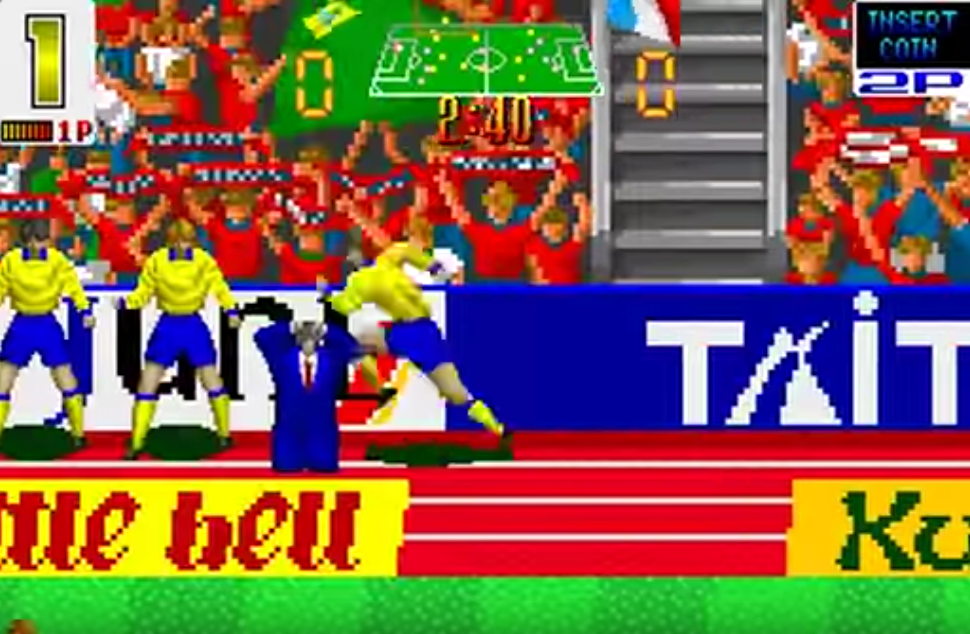 The run is not totally in vein, however, as it does give us the perfect opportunity to piece together a look at more advertisements, as well as fans. Alongside the game developer Taito are fictional powerhouses Marutake and Zatthäus (Maradona and Matthäus?), while the supporters in the stands behind are adorned with scarfs and banners, and the manager of the other team can also be seen:

Back to the second penalty, and while this time a shot is attempted, the huge goalmouth proves not to be an advantage:

Moving to a different aspect of the game, and to the opposite end of the field now, another of Football Champ’s signature features is the Super Shot, or “Super Shoot”: 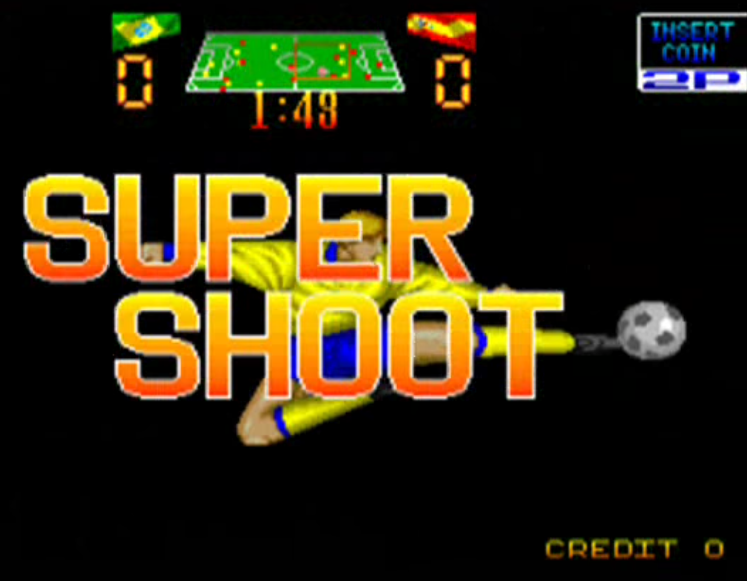 Similar to the kinds of shots we saw in Nintendo World Cup (which is also quite violent funnily enough, and also from 1990), this can be used by your star player at specific points in the match like when you’re drawing or losing, or when there’s 30 seconds left on the clock. Accompanied by an acrobatic graphic, the shot amazingly sends the ball straight through the net to destroy the advertisement behind:

Pausing before the moment of impact allows us to make out the unfortunate board properly: 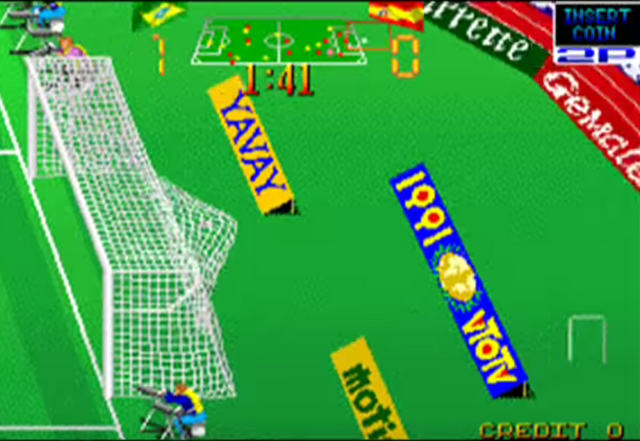 The goal produces a fantastic celebration from the scorer, who makes good use of the running track and skips for joy, this time to his tiny-headed manager’s satisfaction: 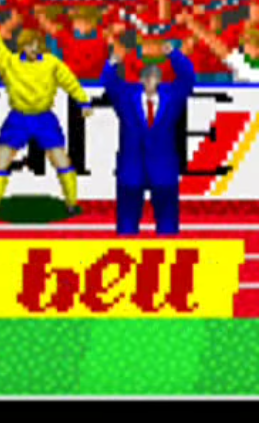 While the goal is scored we also get a nice look at the “curva”, with supporters holding scarfs and flags: 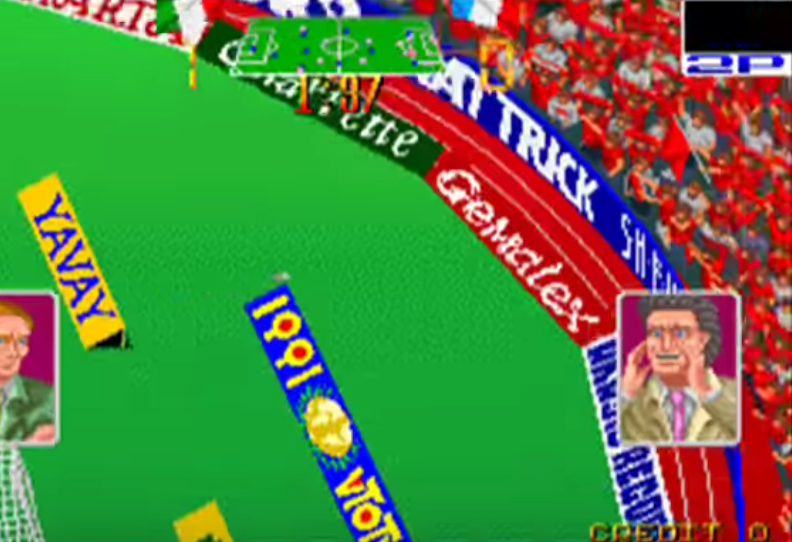 An even better Super Shot is to come, as this time the goalkeeper himself is taken through the net and bounces distressingly hard against hoardings, as a new Spanish commentator laments the situation:

One more variation must be highlighted, featuring an incredibly flawless, multiple back-flip buildup from the German player, while his monocled commentator sneers:

Finally for now in this great, crazy, anime-tinged game (which is only really missing random pitch invasions like in European Championship 1992) is the ability to strike the referee himself:

What a sucker-punch, and the fact that he somehow simultaneously manages to win the ball makes it doubly impressive in terms of the sheer feat. Breaking it down to frames really shows the brutality of the clattering:

It’s ok though, he’s alright if a little dazed: 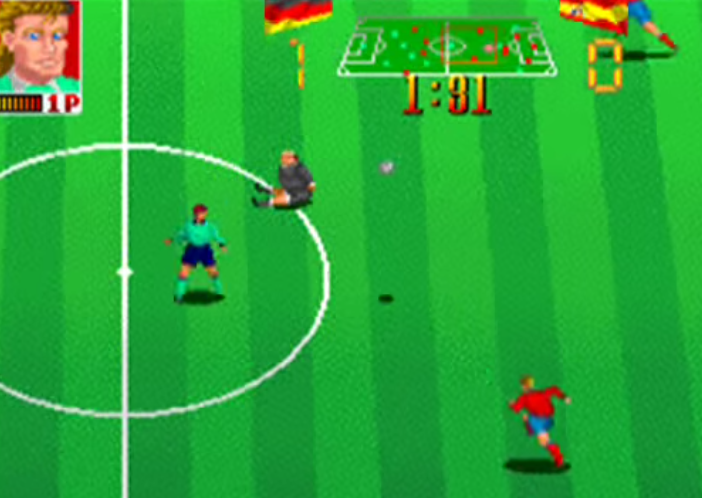