It feels like an age since our last online Football Special Report (with a Shelbourne Fanzine exclusive installment since then), when we examined Euro 84 game by game. As long term readers might remember from our look at the German east vs west post-reunification clash between Stahl Brandenburg and Bayer 05 Uerdingen, we also love a good “game descending into farce” with several red cards along the way and luckily the UEFA Super Cup of 1983 delivered on both fronts.

Credit to the YouTube uploaders who make these posts possible. 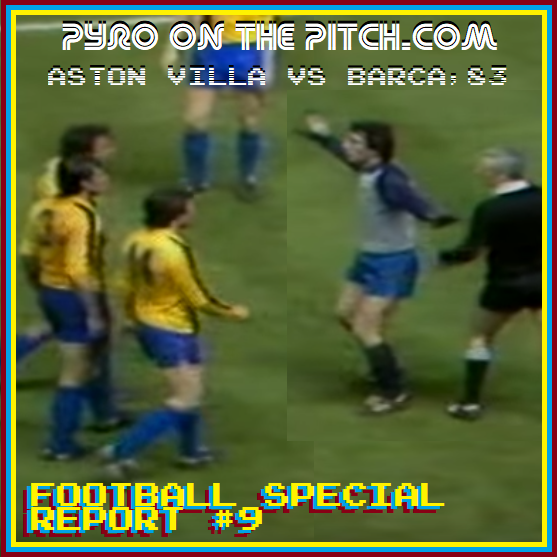 Since we have already looked at Aston Villa’s European Cup semi final of 1982 away to Anderlecht (People On The Pitch #1), that seems like a good place to start.

Amid crowd trouble and police intervention on the unsegregated terrace behind the goal, and indeed a supporter on the pitch, the 0-0 score at full time meant that Villa’s 1-0 win from the home leg was enough to take them through to the final for the first time. While it would be Villa’s debut at this stage in the competition, it was an unprecedented six in a row for English finalists (winning all of them), beating Spain’s five through Real Madrid in the 50s and early 60s.

The domination on the pitch was mirrored by the domination off – and sometimes on again – by the English clubs’ hooligans, who’s example was now being followed by many of their continental counterparts after meetings throughout the years in UEFA’s three tournaments. Or four if you count the UEFA Super Cup. The 1982 final between Villa and Bayern Munich in De Kuip, Rotterdam, seemed perfectly primed for trouble, with the Dutch lowlands a suitable battle-field for the invading English and German drunken armies.

Of course arrests in the city before the game were inevitable, and the stadium had already been the scene of Feyenoord, the police and Tottenham’s infamous clash in the stands at the 1974 UEFA Cup final (and again the following year). But, with the two main sets of supporters kept far apart in either end and prevented by De Kuip’s imposing “railings” from any serious encroachment attempt, no major trouble broke out during the final.

Aston Villa completed the English “six in a row” (made 7 out of 8 a couple of years later), reaching the pinnacle of the club’s history with a 1-0 win over Bayern thanks to a 67th minute goal by Peter Withe. Elsewhere in Europe, IFK Göteborg of Sweden hit their own personal high by winning the UEFA Cup, defeating Hamburg over two legs in the final (a feat repeated in 1987 by beating Dundee United).

At the time of writing, this would have meant Villa and Göteborg – as the two continental cup winners – facing each other at the start of the following season in the “Super Cup”. But modern fans may forget that this was not always the case, as at one stage the long, lost Cup Winners’ Cup was considered equal to, or more important, than the UEFA Cup. After all, entrants to the Cup Winners’ Cup had – obviously – won something to get there, while the UEFA Cup sides had “merely” finished respectably the league without any silverware to show for it.

Therefore, Villa’s future opponents had been decided back on May 12th in the Camp Nou when Barcelona defeated Belgium’s Standard Liege 2-1 in the CWC final, powered by the Danish striker Allan Simonsen.

More differences to the modern version of the Super Cup – which was originally introduced following the 1972/73 season – included the fact it too was a two-legged home and away affair, rather than held in a neutral venue (until 1998 when Monaco’s Stade Louis II began 15 years of hosting a one-off game instead).  Another was that the matches were played in January of the following year, meaning that the culmination of the season that had started back with the preliminary round of the Cup Winners’ Cup on August 19th, 1981, didn’t arrive until early 1983.

So the 1982 Super Cup was actually taking place in 83 (it would turn out to be the last year of this practice as the next edition was scheduled for November and December, resulting in two Super Cup finals in the same calendar year). At the first leg on Wednesday, January 19th, in the New Camp – on front of only 40,000 compared to the 100,000 in attendance for the Cup Winners’ Cup final – Spanish international Marcos Alonso gave the Catalans a 1-0 lead to take to England for the conclusion a week later.

Aston Villa vs Barcelona, Villa Park, Birmingham, 26/01/1983: As with the first match in the tie, Villa Park is by no means full for the second leg, although the 31,000+ is still a respectable number for a Wednesday night: 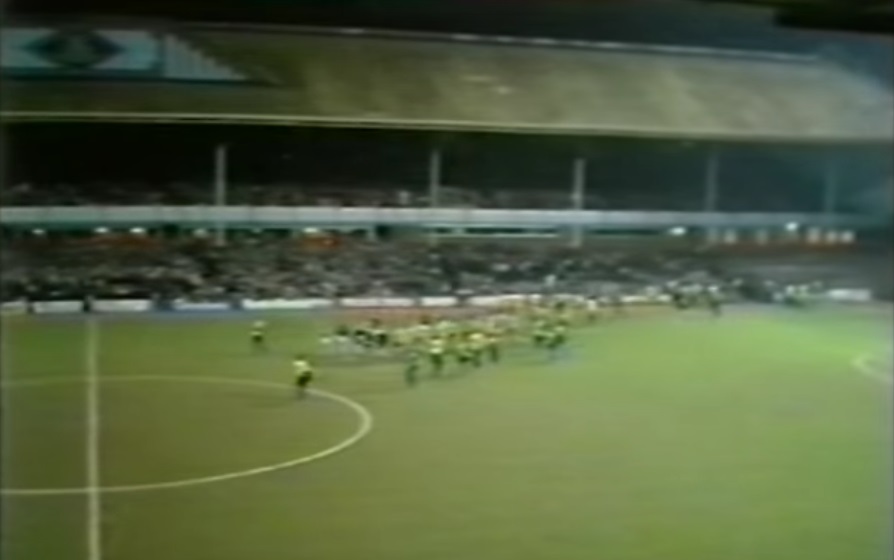 As you all should know from our What Football Is Supposed To Look Like galleries, we love classic graphics and we get some good ones here, including substitutes: 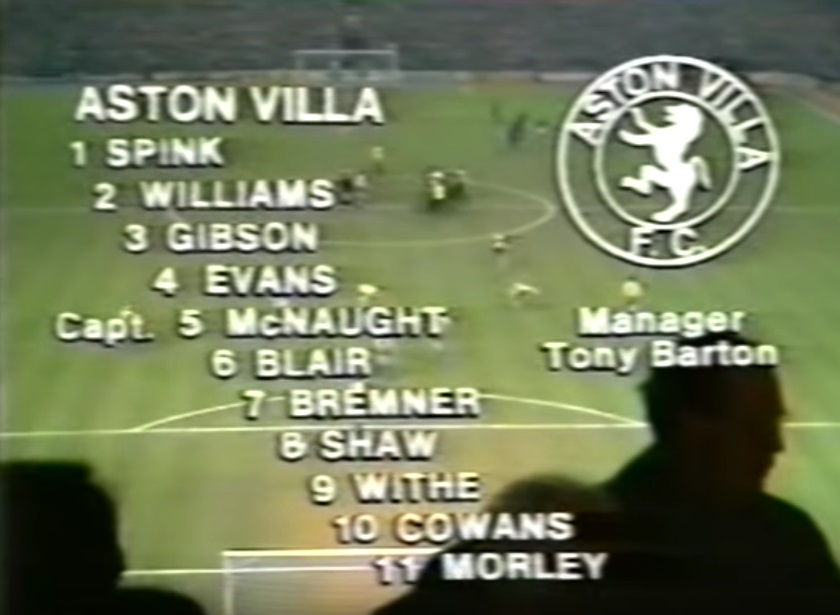 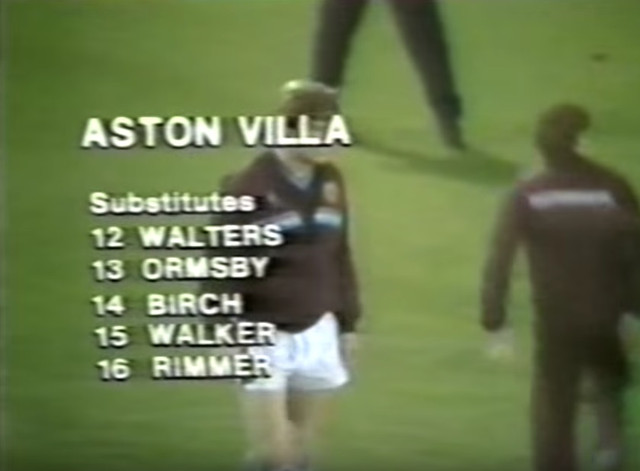 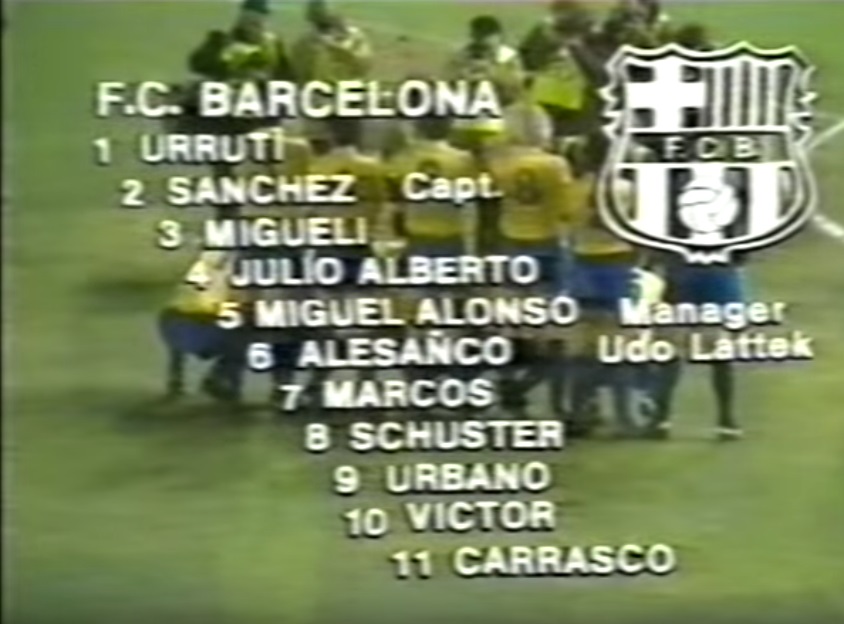 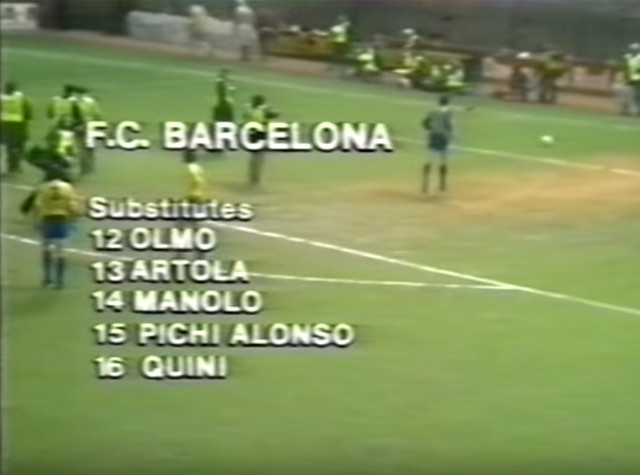 As glimpsed above, the away side are wearing one of their all-time great attires, featuring a red/blue vertical strip over the glorious yellow background: 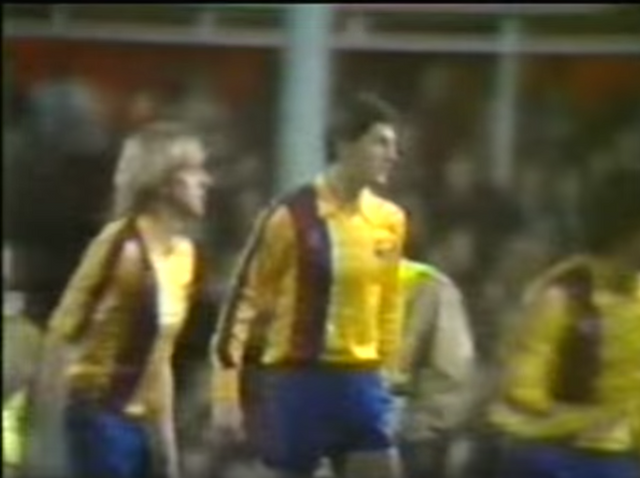 The home club’s Le Coq Sportif kit is not too shabby either (with matching dual sweatbands as standard): 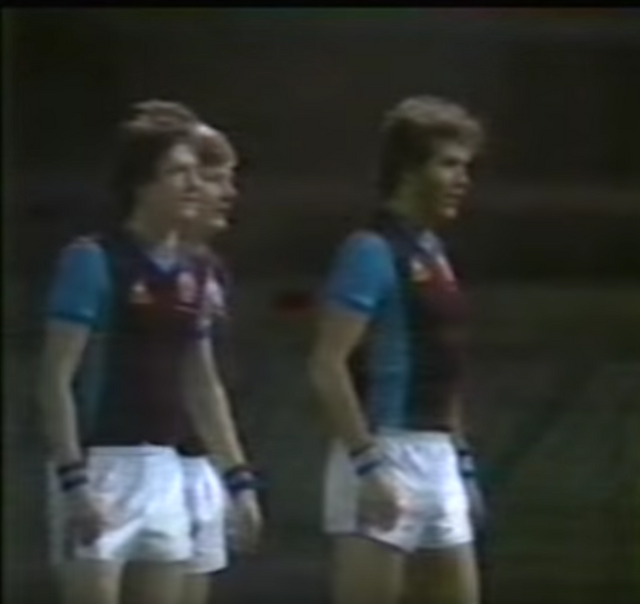 Early on we can see that several sections of terrace behind the goal are completely closed-off, accounting for some of the “missing” support: 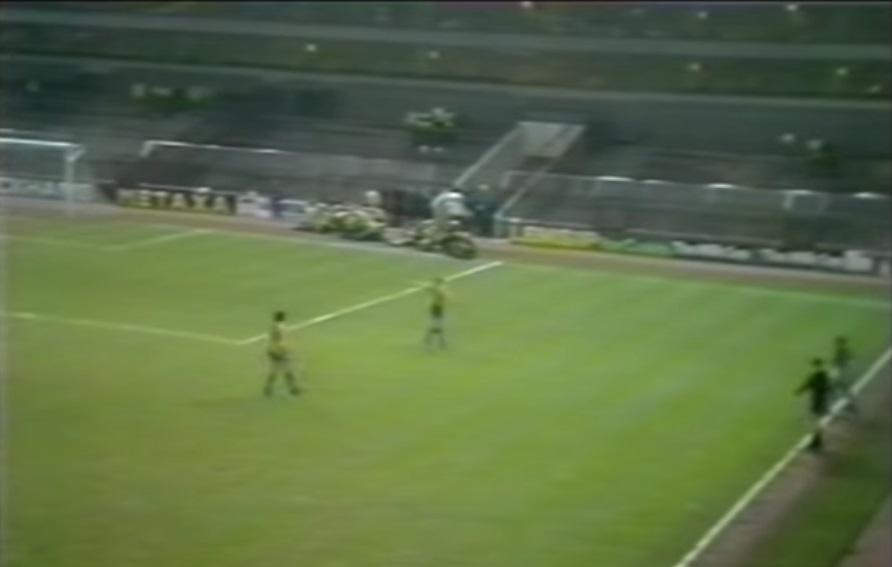 Along with some empty seats on the far side of the pitch near the corner: 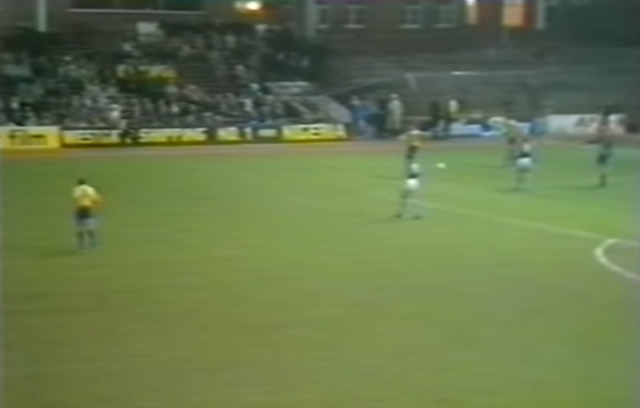 At the other, huge “Holt End”, it is a different story in the enclosures: 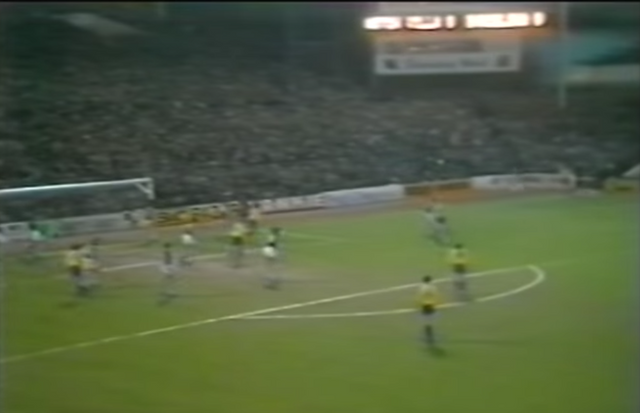 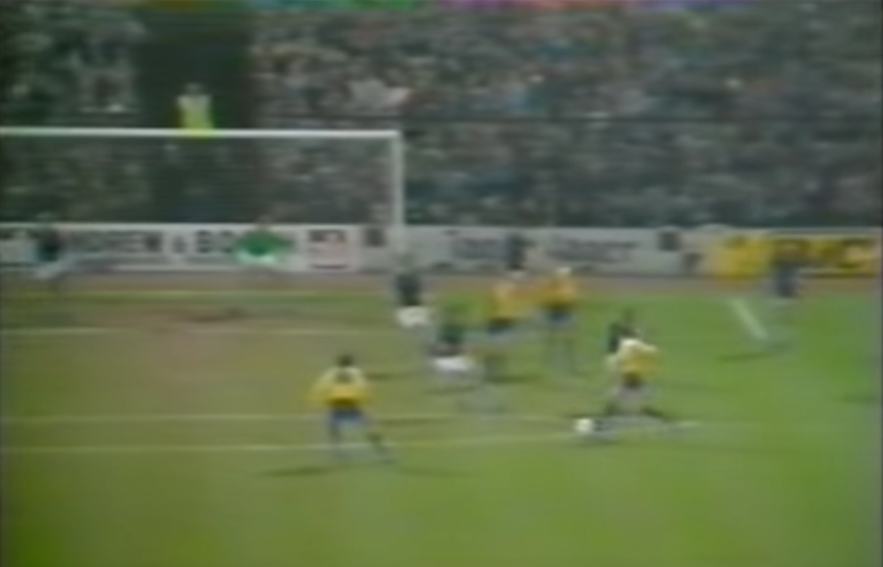 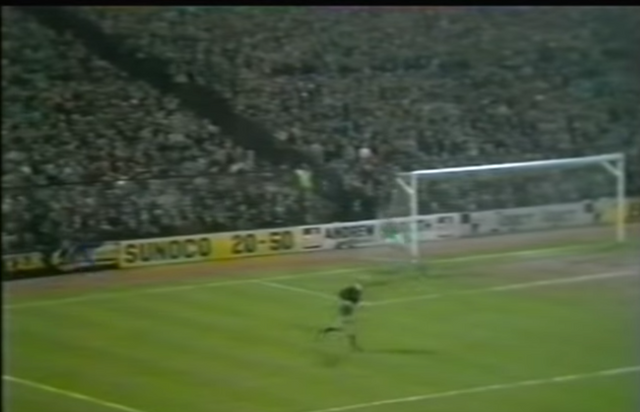 The Villa Park pitch is also looking in quite commendable condition (compare to a UEFA Cup game against Dynamo Kiev the year before): 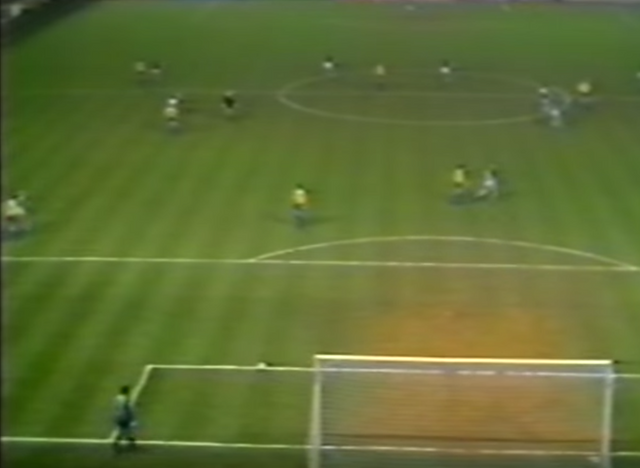 The handsomely dressed – but, as it turns out, dastardly – Barca team quickly put themselves on the home crowd’s bad side, with this later report from one fan in attendance explaining why (according to a YouTube comment):

The most obscene team performance I have ever been present at in football. Barcelona that night were disgusting. Cynical and clinical fouls, atrocious behaviour shoving the referee and the like. Punches thrown, kicks and appalling tackles.

More on that later. But the real action – the “descending into farce” part – begins in the second half, starting with one of the more bizarre offences you’ll see on a football pitch.

As a Villa player launches the ball forward, defender Julio Alberto suddenly plucks the it out of the air with his hands in an almost instinctual manner. As the referee blows the whistle and the crowd loose their sh*t, some of Alberto’s teammates have the gall to protest his yellow card:

The move did no favours for the English perception of swarthy, spineless, cheating foreigners. Soon, stupidity is added to this list, or simply a wish to get sent off, as it is realised that Alberto is already on a yellow card (as many other Barca players by this stage):

The red card is presented much to the delight of the home fans and the disappointment of Julio Alberto, who had only joined Barcelona after they had won the Cup Winners’ Cup so he probably shouldn’t have been allowed there anyway:

Villa, of course, are more than happy to return in kind the actions of the “dirty foreigners”, as demonstrated by this punch that receives a yellow:

Before another tasty tackle from the away side:

The behaviour on the pitch has tens of thousands in the stands seething, yet Barca are still leading in the tie. In the 80th minute, however, a set piece attempt from Villa goes awry…:

…which inadvertently leads to the chance for Gary Shaw to make it 1-0 on the night and 1-1 on aggregate. The Holt End explodes:

The game goes to extra-time and on 100 minutes a Villa player is pushed down from behind in the box. Penalty: 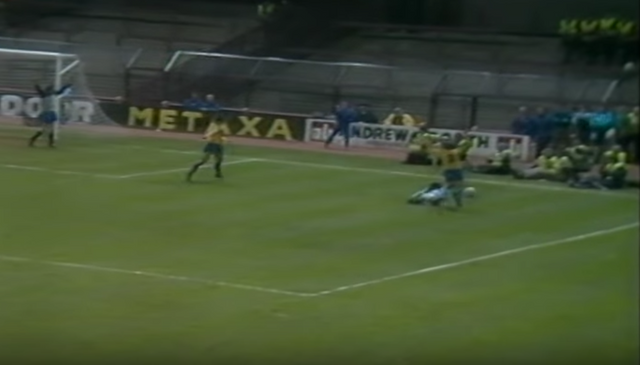 Many of the players in yellow immediate rush to the referee – Alexis Ponnet of Belgium – to enthusiastically dispute the call:

But the clearly gallant and chivalrous goalkeeper Javier Urruticoechea – commonly known as Urruti – steps in to aggressively shield Ponnet from his teammates (literally hopping at them at one stage), much to the ref’s annoyance:

After order is restored, it initially seems that Urruti’s charity has resulted good karma as he saves Gordon Cowans’ penalty, but the future Bari player slots it in on the rebound. As Cowans lashes the ball into the net one more time in celebration, the ‘keeper suddenly scythes down the goalscorer – surely just an accidental slip:

The Aston Villa players don’t think so and advance. The brave Urruti rushes out to meet them, fists raised:

With a cheeky grin, Villa’s number 3 Colin Gibson – who is clearly reveling in all this fun – engages in a little shadow boxing of his own:

We also see that the Barcelona goalkeeper shirt is Adidas-made, rather than the Meyba jerseys of the outfielders: 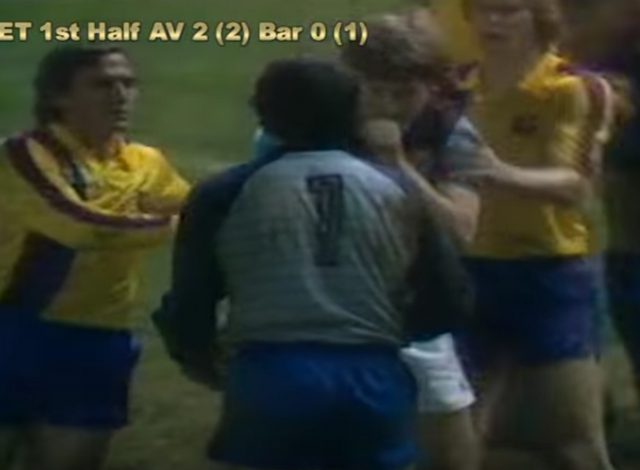 Eventually everyone backs off: 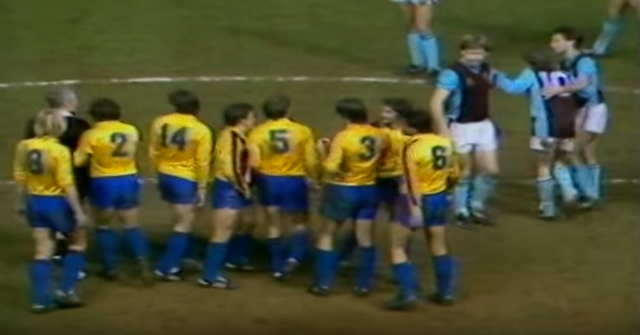 Amazingly, only four minutes later a ball is swung into the box by the home side and met with a brilliant header from Scotsman Ken McNaught. Urruti’s palm is not enough to keep it out:

Now the score is 3-0 to Villa on the night, 3-1 overall. Barcelona’s chances of a comeback are diminished further before the ball is even kicked again, as, on the linesman’s advice, Ponnet jogs over to the hero from the 1st leg Marcos Alonso and presents him with a red card for an off the ball incident:

Barca captain Tente Sánchez passionately pleads with the ref that Alonoso himself had been the victim of an elbow. In the background, one of their comrades holds a sort of hanky to his nose as a clotting agent after an earlier incident, with blood already smeered across the front of his jersey:

After all this, there is still time for more. In the second half of extra time, Allan Evans – another Scot – lazily lunges at poor old Tente, who feigns retaliation before quickly turning his attention to the Belgian referee instead:

As the ref deliberates, we can see number 3, Migueli, is still playing on holding his bloody nose:

And his mess of a bloody shirt on the right: 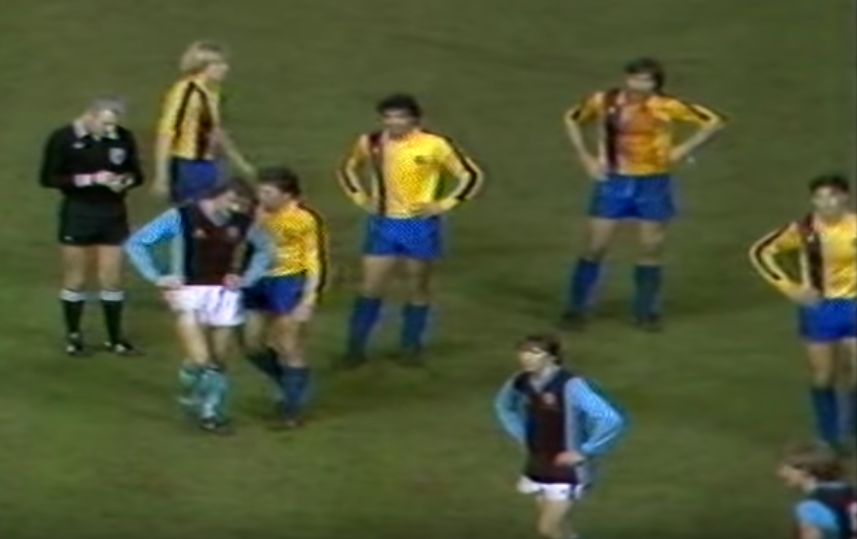 It turns out to be Evans’ second yellow card offence and he too is off, much to his shock and dismay: 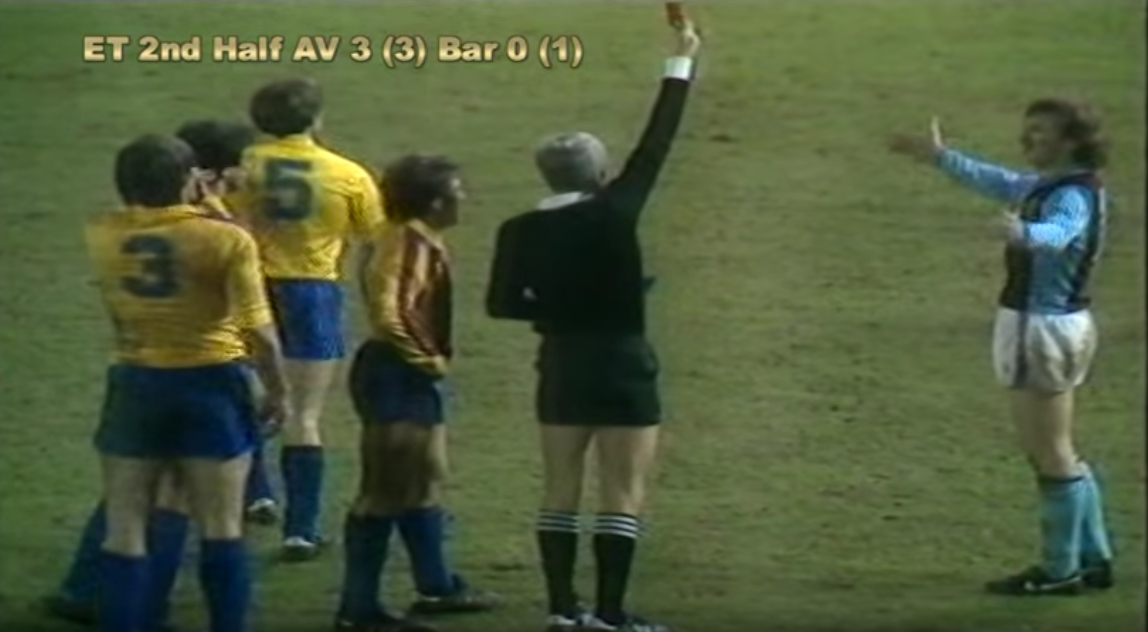 Finally, after quite an exhausting, violent and entertaining evening, the tie finished 3-1 to Aston Villa. It would turn out to be a fitting end to this golden-era, and their last piece of European silverware until an Intertoto Cup win in 2001. But that is a story for another day. 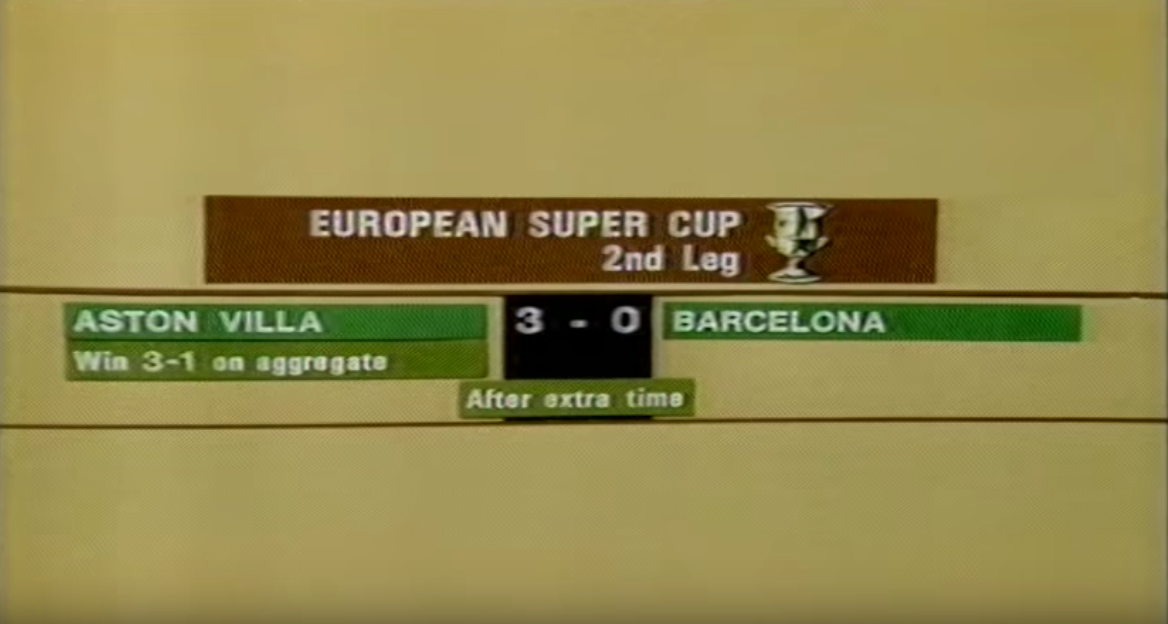 Rest in peace Javier “Urruti” Urruticoechea, who died in a road accident in 2001. Forever in the POTP Hall of Heroes.