Having earlier gone on a run in Retro Shirt Reviews of featuring a different kit manufacturer in each episode, #9 and #10 then looked at a consecutive pair of long-sleeved Adidas beauties. You’ll be happy, probably, to hear that the vintage Adidas theme continues now with even more Dassler dynamite in the pipeline, including a return of long sleeves. 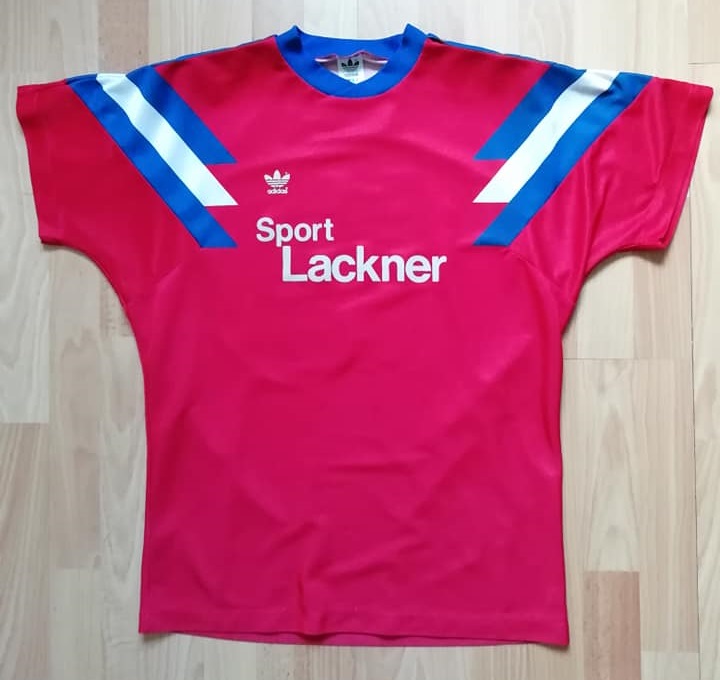 In one of our favoured colourways of red, white and blue (nothing to do with the American flag, which you could have guessed after our spelling of “favoured”), this shirt also uses one of our favourite templates of all time. The classic Adidas sleeve stripes that first appeared in the early 70s had finally been modified by 1989 when this design was launched, with the lovely red and blue stripes here perfectly complimented by the blue and white flashes that interrupt them, while a great, blue wrap-over collar frames the whole ensemble from above: 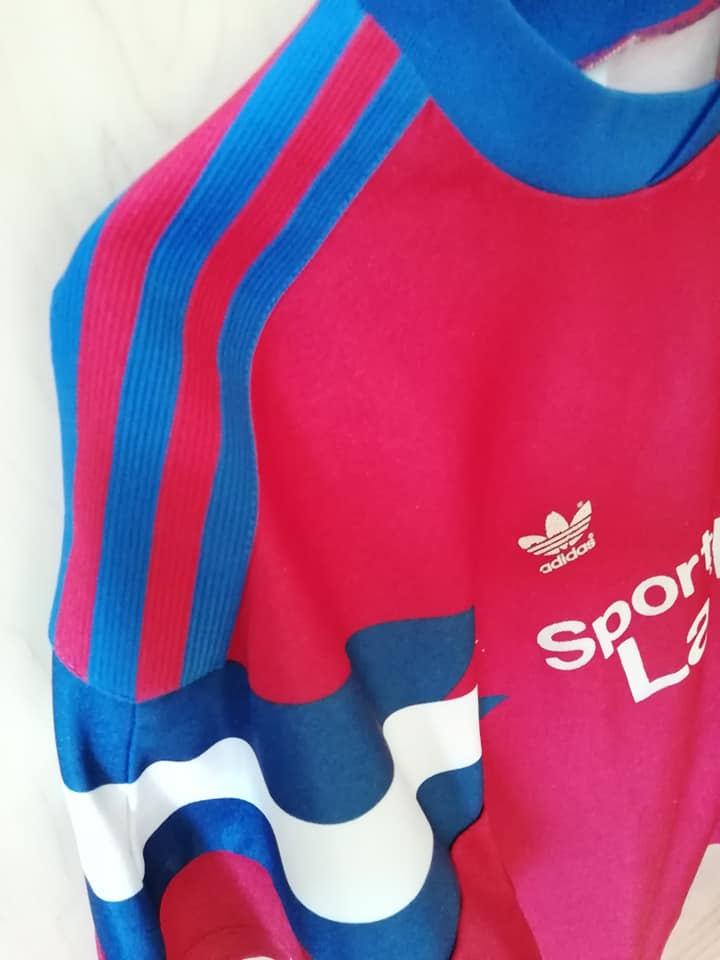 One of the most interesting facets of this template, catagorised by Adidas as “Anderlecht” (thanks to John Devlin of True Colours Kits for this info), is that it was basically a proto-version of the Adidas Equipment style of the early 90s – which would evolve the concept into thicker, separate shoulder flashes and removed the stripes – with even a looser cut on our jersey in comparison to tighter tops of the earlier 80s. Arguably this had already begun the year before with the launch of West Germany’s most iconic shirt of all time, 88-91, as here is essentially the same idea but with the middle sections cut out: 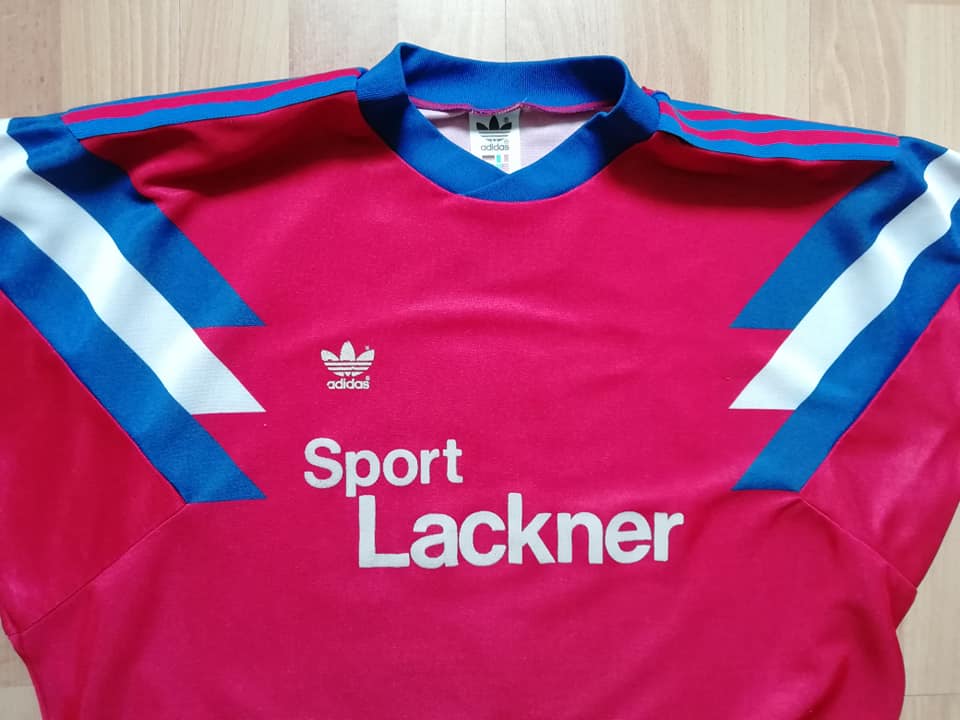 Unlike on the previous couple of shirts in this series from earlier in the decade, the trefoil is back to it’s full self this time, with two unsliced horizontal lines in the middle. The sponsor, Sport Lackner, is a sports shop that still exists in the small town of Rotthalmünster, Bavaria, in southeast Germany – only 7.56km from the border with Austria: 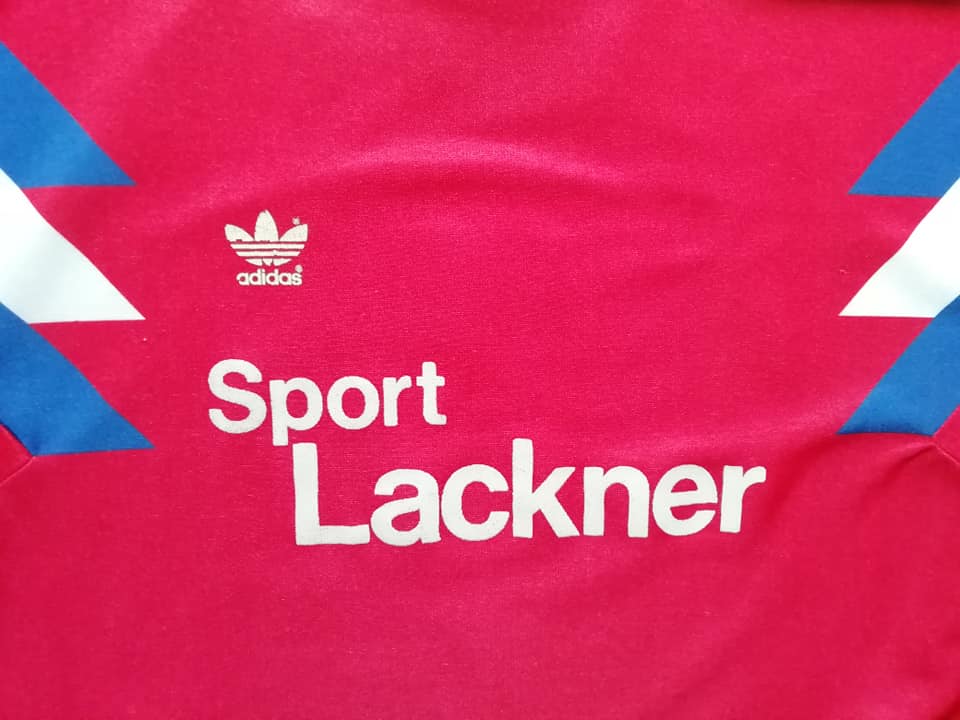 Which brings us on to perhaps the most important part to some people, and that is the team itself. For most of Retro Shirt Reviews we have had little to no idea which obscure lower league, amateur and company teams wore our treasured jerseys years ago, but thanks to the German tradition of including the club name on the back we get confirmation that this TSV Rotthalmünster, along with a great diagonally pinstriped boxed number 13: 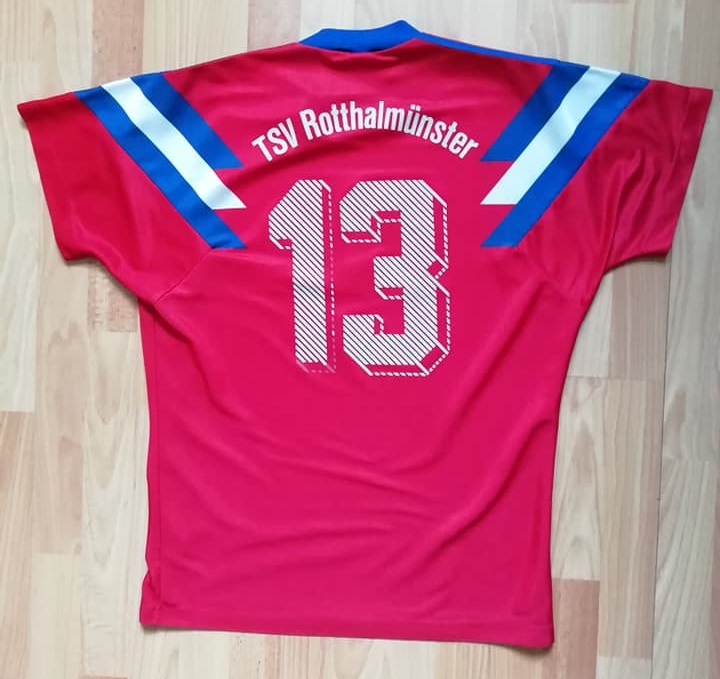 Like their sponsor from this time, it seems that TSV are still around if this website indeed represents the same entity. As for the template itself, Borussia Dortmund were perhaps the most famous of many club sides to utilise it in the 1989 DFB-Pokal (featuring alternate trefoil-wordmark positioning/ratio), before Colombia brought it to a wider audience at the 1990 World Cup with their similar red version as first choice over yellow.

Lastly, when a united Germany would finally move on from the “ribbon” shirt, their 1992 Adidas Equipment design (also used by Arsenal) maintained continuity from this look by removing the centre sections but, unlike the other Equipment templates, keeping the shoulder flashes together to update the template’s concept for the 90s. Of course that still wasn’t as nice as our rogue Rotthalmünster masterpiece.