We somehow skipped an installment of Supporter Snap Back in our latest rotation of posts here on PyroOnThePitch.com, but that rectifies now. Originally this category was intended as a place to post quick (as in “snap”) entries with pictures and gifs focusing on fans in a single match, but our tendency to ramble on about backgrounds and such has hampered that. However this shall also be amended going forward, starting now with a special double episode (how is that quick?) as we look at two matches between some big Portuguese rivals during the 1990/91 season. 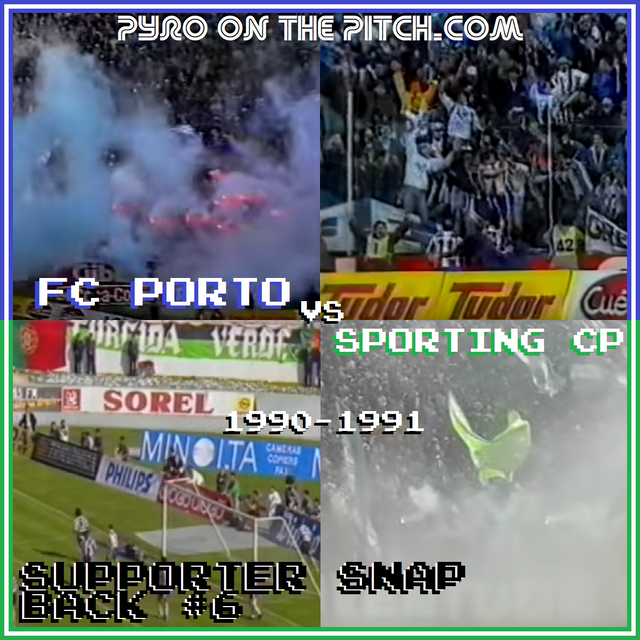 It’s a packed Estádio das Antas – officially “Estádio do Futebol Clube do Porto”, in use since 1952 (until 2004), but more commonly known after the Antas neighbourhood of Porto within which it stands – on a November Sunday for a meeting between two of Portugal’s big three: 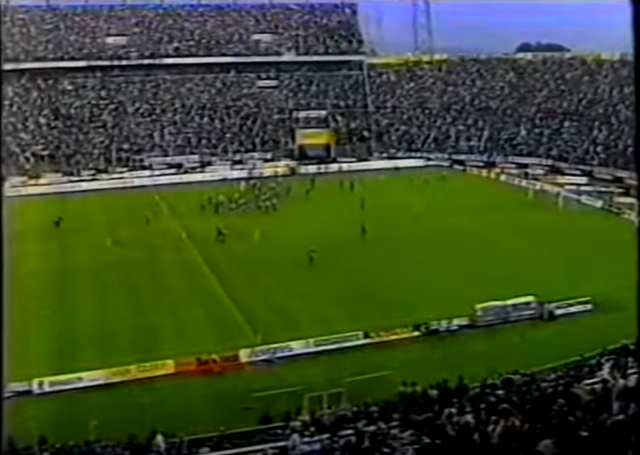 Sporting take to the muddy field first, with the goalkeeper clearly the only heathen among men in 1990:

Them come Porto, who dutifully and respectfully greet the packed terraces: Besides the large flags above, blue smoke and flares abound from Porto’s ultras, the Super Dragões and co.: 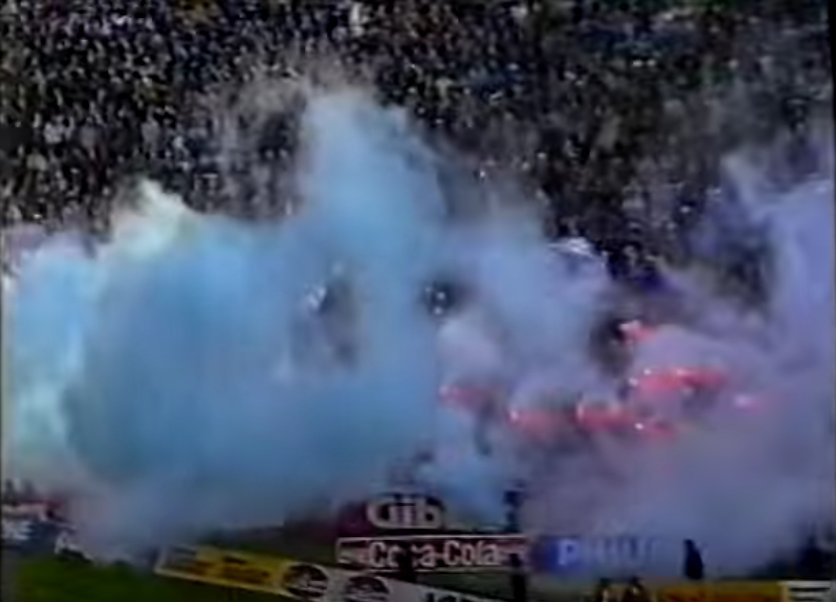 During the match the rain starts coming down, which means Porto’s opening goal in the first half is celebrated by many supporters under umbrellas: 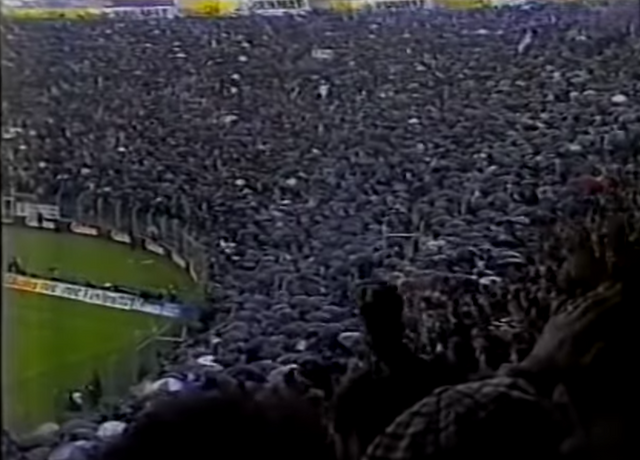 At the away end, the Sporting fans’ right wing tendencies are displayed with an open swastika on one banner with Celtic-crosses, along side the more common Union Jack to create a bemusing (to the unknowing) cross-section of cultural references: 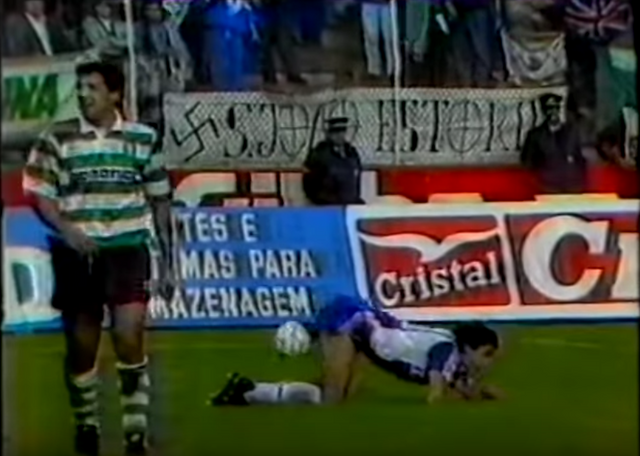 In the home section, the banners of  “Ultra Super Dragões” and other groups – “Vikings”, also displaying a Nordic rune symbol to indicate a right wing persuasion, and “Total Caos” – are in perfect position for the hard cam: 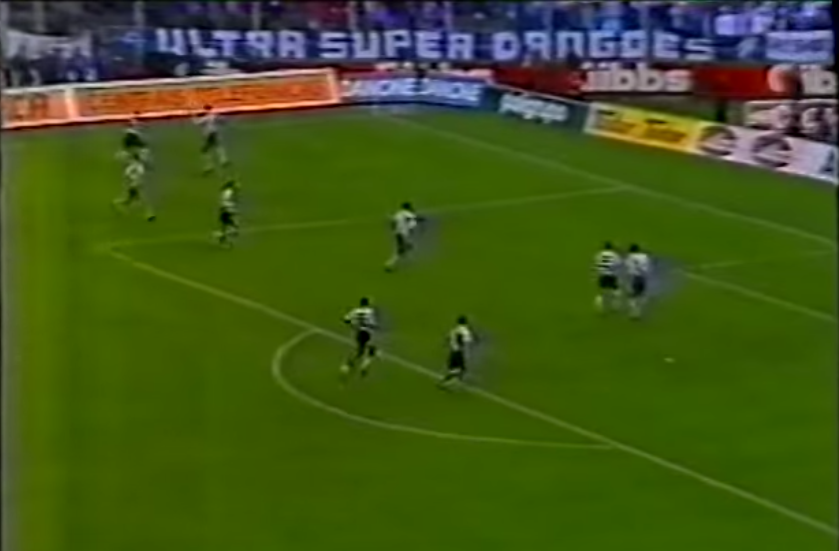 Upon closer inspection of the Dragões’ banner, the above referenced Celtic-cross is present too – another symbol of “old Europe”: Elsewhere among the Porto fans, one more far-right empire is represented in the form of Stars and Stripes: 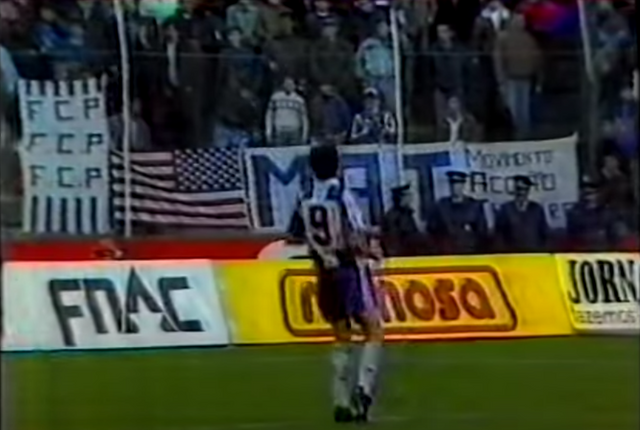 In the second half, with the banners waning due to the conditions, Porto score a second to trigger absolute pandemonium in the stands:

The players celebrate with the hardcore support: With time running out and victory all but assured, it’s party time for the blues:

The referee blows it up and that’s it, Porto 2-0 Sporting: Come the second last game of the season and the sides meet again, Sporting in third and Porto in second below Benifca, with a Porto championship still mathematically possible. This time, though, it’s Sporting’s Juventude Leonina (Young Lions), aka “Juve Leo Boys”, with the majority of smoke and flags: But the Porto hardcore have also come in numbers, with this close-up showing a Celtic-cross that also appeared on one version of SD scarf: As the away team come out, they are greeted with more pyro (note the massive can of Pepsi also), with a “Dragões Azuis” – Blue Dragons – banner visible: 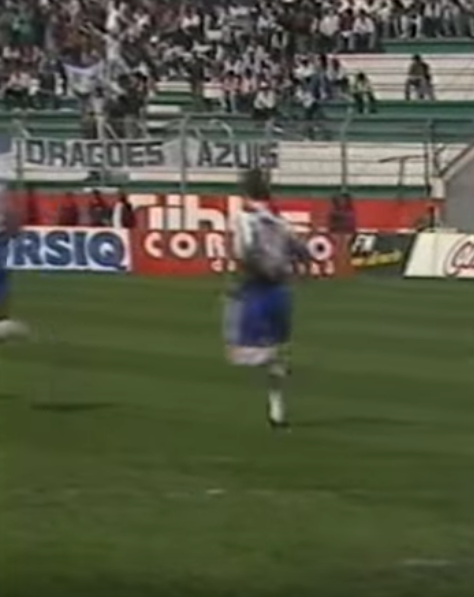 While in the home section, a mocking “Obrigado Bayern” message is displayed – “Thank You Bayern” in reference to Porto’s European Cup exit at the hands of Bayern Munich the month before: 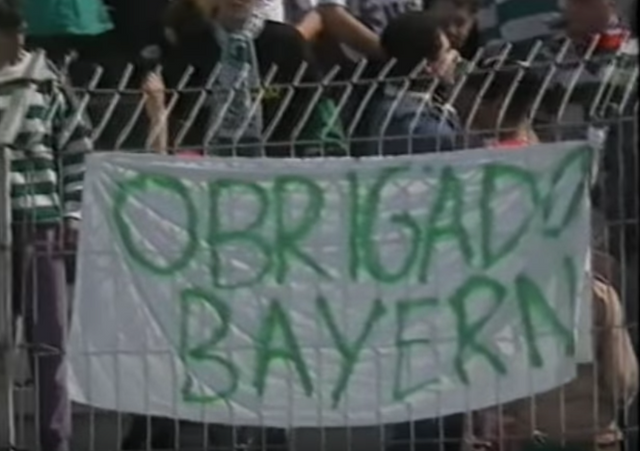 During the game, while one manager gesticulates, a portion of the Juve Boys grand banner can be seen in the background:

On the other side of the end, the banners of another Sporting group, Torcida Verde – Green Crowd: 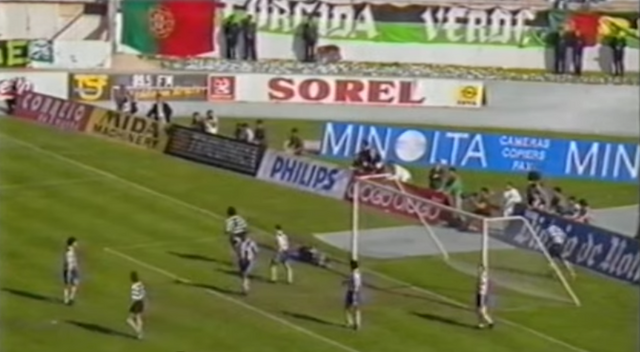 Beside a “Curva __” banner, the orange lettering of the second half making it very hard to make out (as seen here vs Inter in the UEFA Cup four days previous): 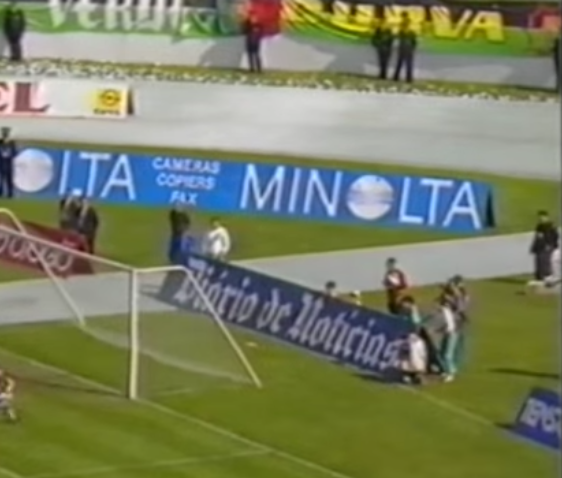 Continuing the far right theme of the fixture, some Sporting banners feature a Germanic iron cross, including a Tocida Verde “Força Sporting” flag: 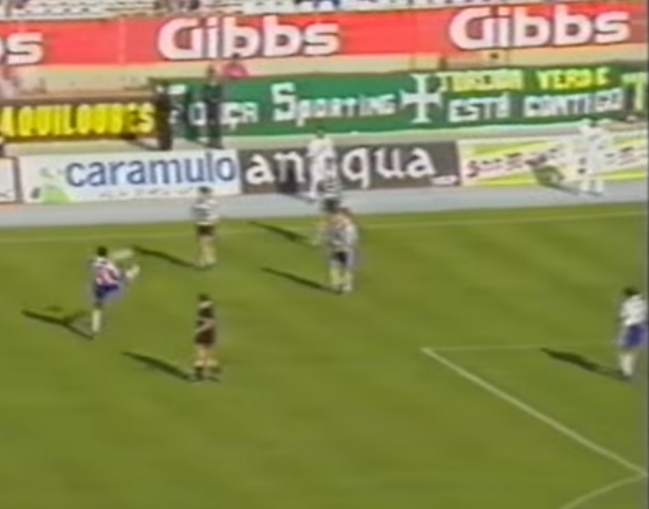 And one group, Onda Verde – Green Wave – located closer to the away section at the other end: 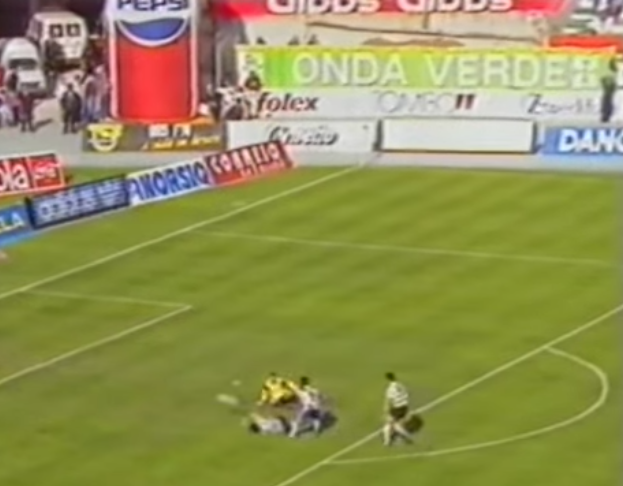 Once again Porto were 0-2 victors, putting them into a final-day title showdown with Benfica at home the following week. But Porto would suffer the same fate as Sporting by losing that game 0-2 to give Benfica the championship, while Sporting themselves finished third.