Thanks to a young POTP supporter named Niall for suggesting this episode to us via the Facebook page, please send us anything you think is interesting too and we may well do a post on it.

While we have come across pyro on pitches in the likes of Croatia, Netherlands, Italy and other places you might expect during this series, the Scottish Premier Division on a mid-December evening in 87 may be one of the more unlikely sources of an example in the “genre”. For all previous installments (apart from some currently down for maintenance), including the first ever post on this site back in 2017, click here. 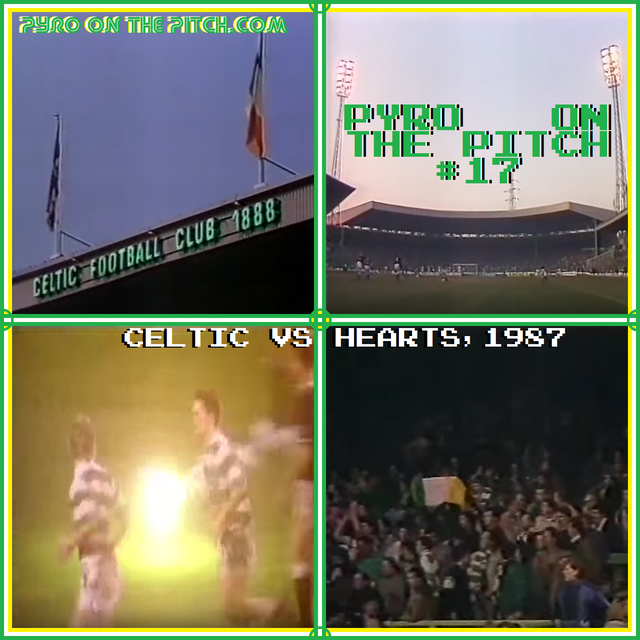 With clubs playing each other four times per season in the Scottish Premier Division until 2001 (when the league would start splitting for the last quarter, meaning half the clubs still have to play each other a fourth time), certain fixtures must have seemed fairly monotonous. For Glasgow’s Celtic and Edinburgh’s Hearts, games between the two became particularly common during during the period of 86/87 to 88/89 when they were also continually drawn against each other in the Scottish Cup, making it 15 matches in three seasons.

Being located on opposite sides of the country’s political-religious divide however, as well as each representing one of the two main cities, made any Celtic-Hearts still a juicier fixture than most this repetitive. During December 1987 there came a typically intense affair in Celtic Park, made more important due to the fact that by the following May Hearts would end up the home side’s closest contenders in the title race (although Celtic ultimately finished a comfortable 10 points ahead). 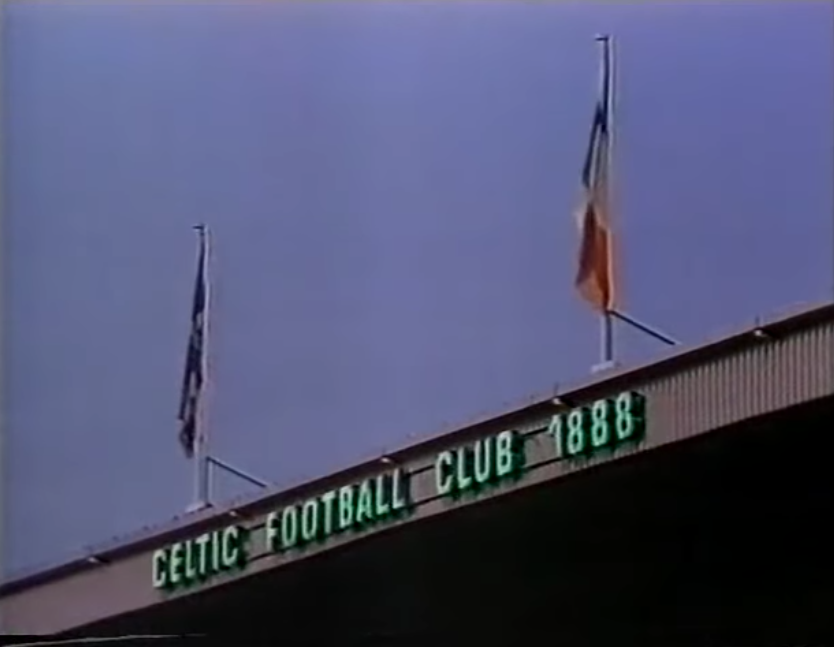 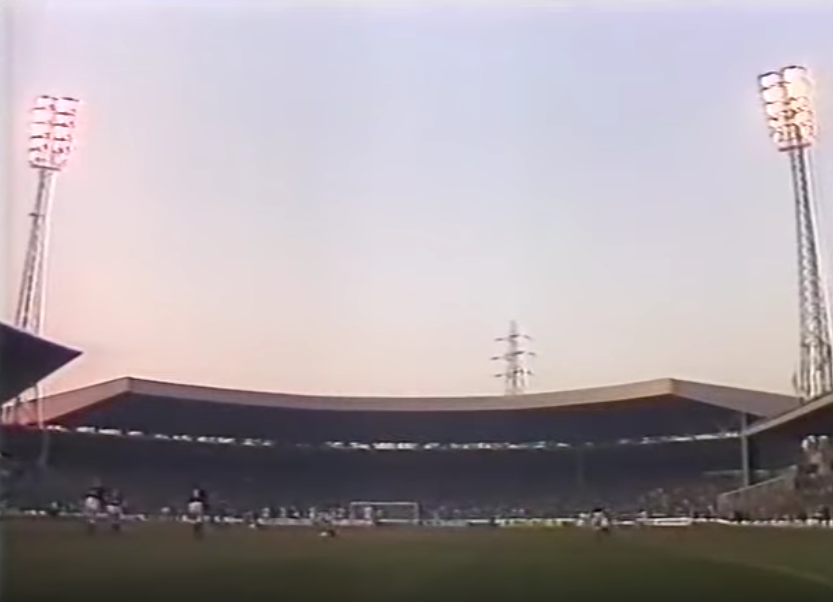 With the massive, cavernous Celtic Park nearly full on a calm winter’s Saturday evening, the player’s kick off. Parallel to them high in the main stand sits the slightly out of place press box, which appears as if it is floating in mid-air: 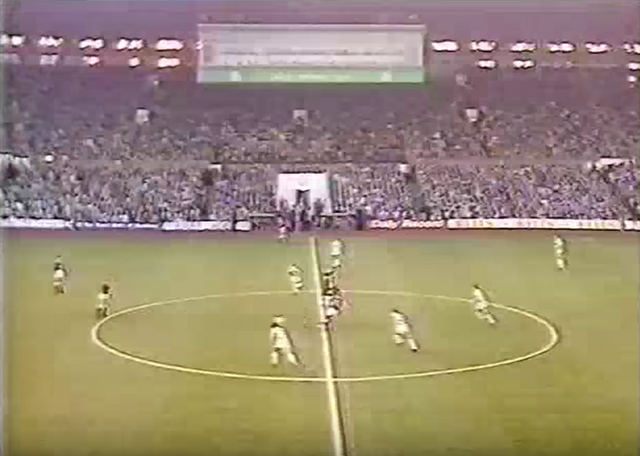 Opposite this is the huge North Terrace famously known as “the Jungle”, where most of the hardcore singing support cram in: 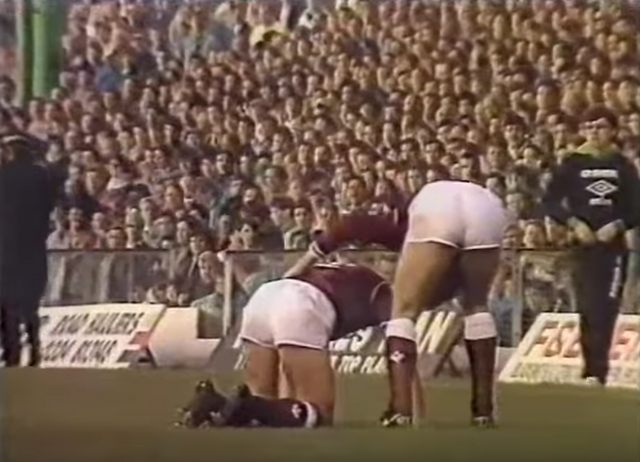 The also ginormous West Terrace known as the Celtic End, located behind the goal, had originally been the home of the main singing section but a gradual migration occurred in the early 80s. Still, it’s structure and mass is some sight, as well as still containing some rule-breaking fans: 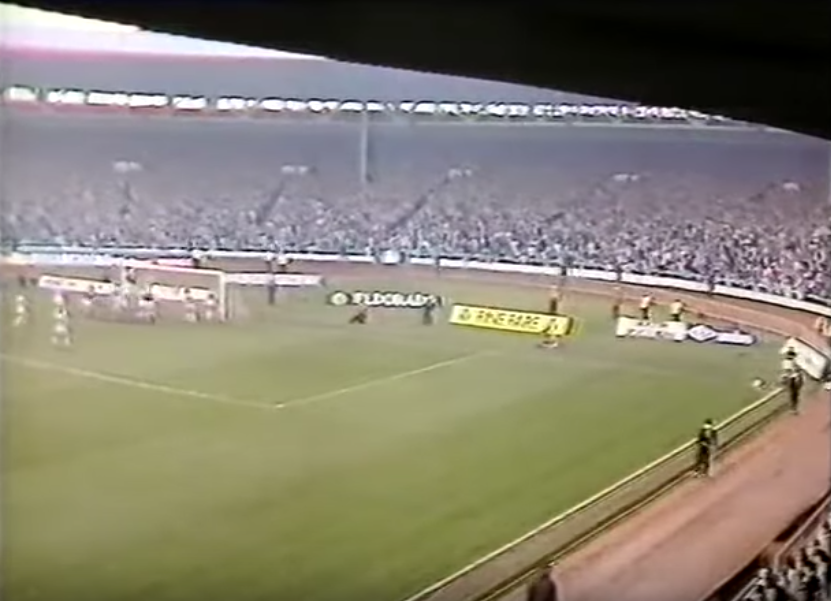 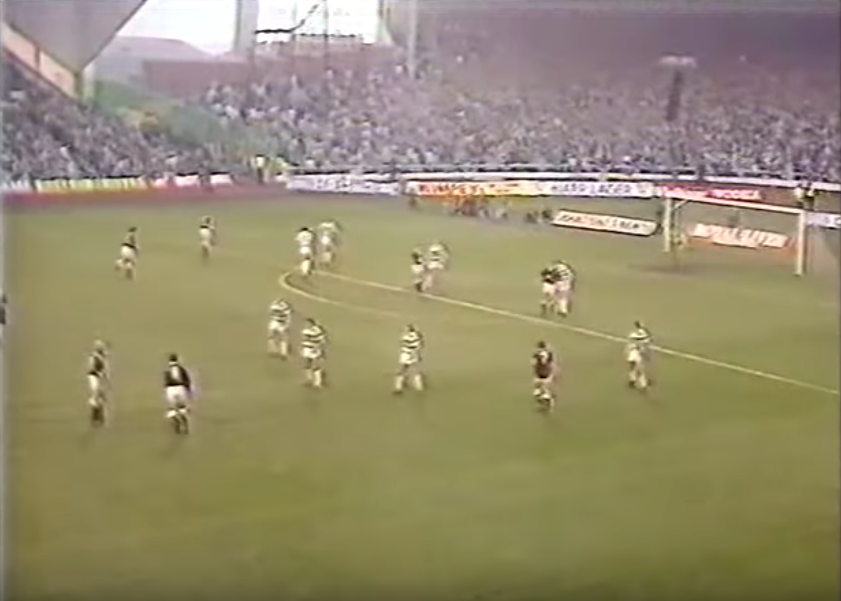 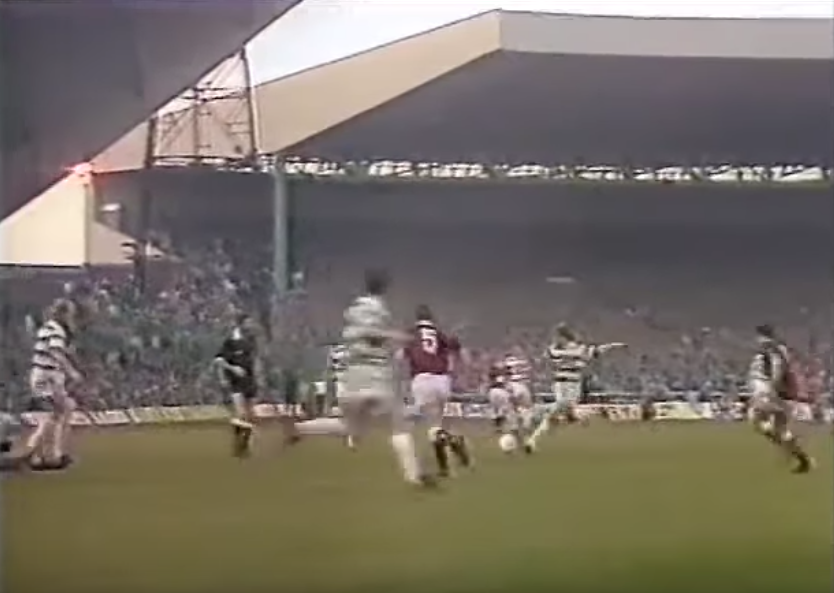 At the other end, known with affection as “the Rangers end”, are the Hearts fans, cordoned off from the Celtic supporters surrounding them by large, naked sections of terrace. These gaps account for the fact the the ground couldn’t be completely full, as was the case when Celtic’s Glasgow neighbours visited: 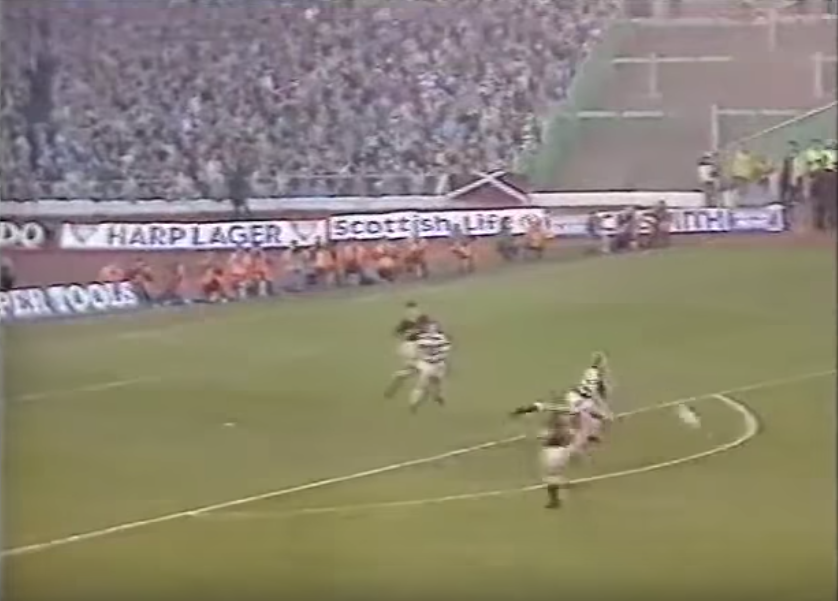 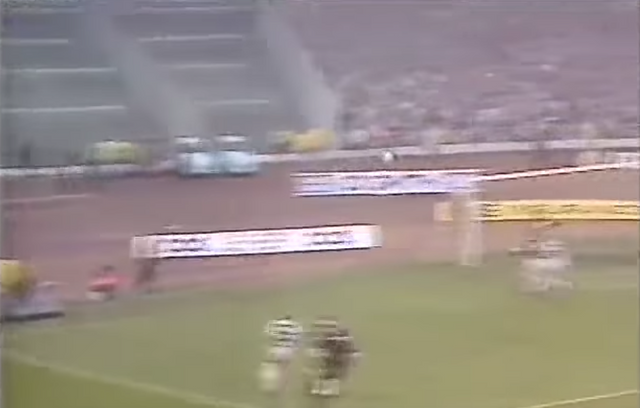 During the first half, said away enclosure erupts into rapture as Hearts go 0-1 up: 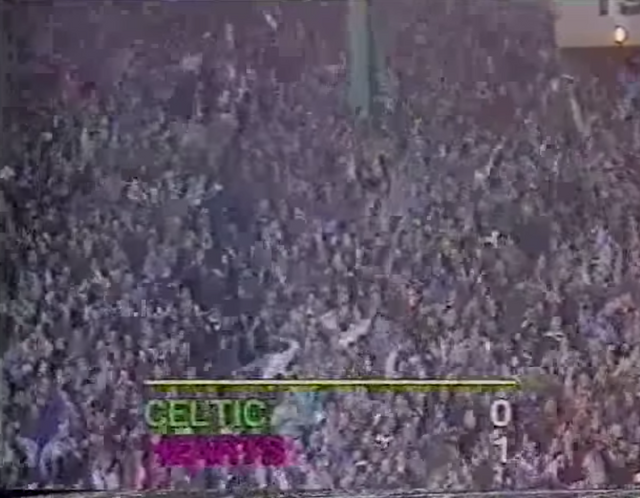 Which it remains going into half-time: 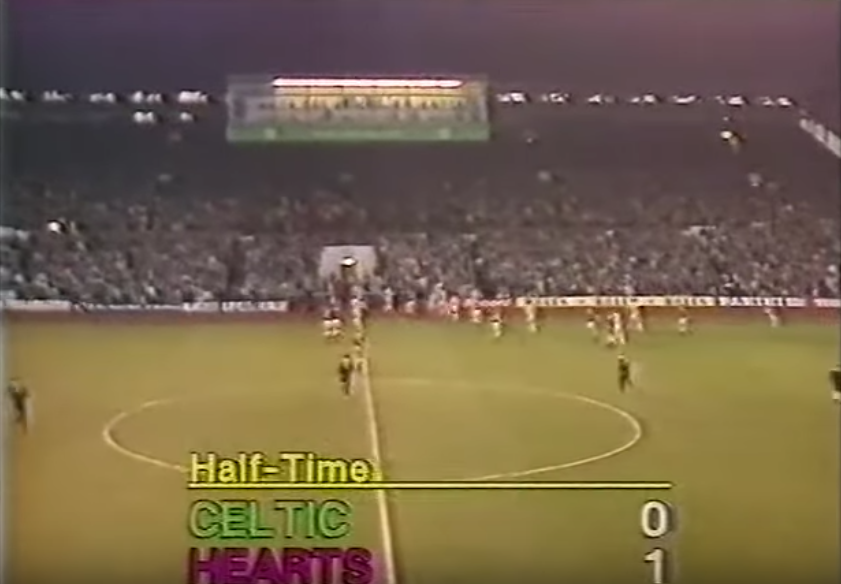 One collection of Hearts fans pass the interval through group dance:

And soon after the break the maroon half of Edinburgh are dancing once again as their side go 0-2 up: 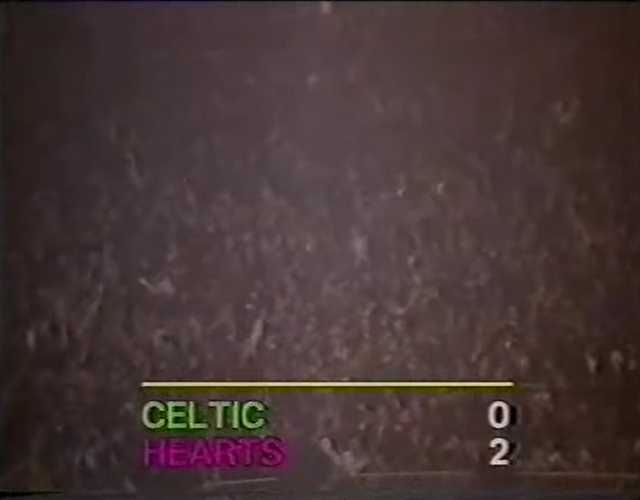 With darkness descending, a grim home defeat seems on the cards for the Celts, who had been league runners-up to Rangers the season before: 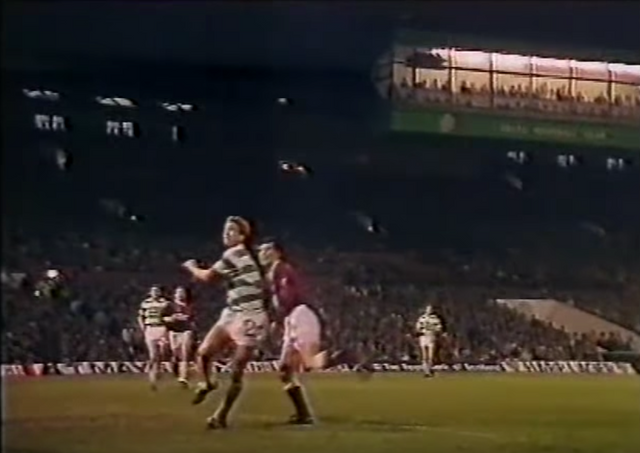 One bright spot, as always at this time, is the sublime yellow and green kit of goalkeeper Packie Bonner…: 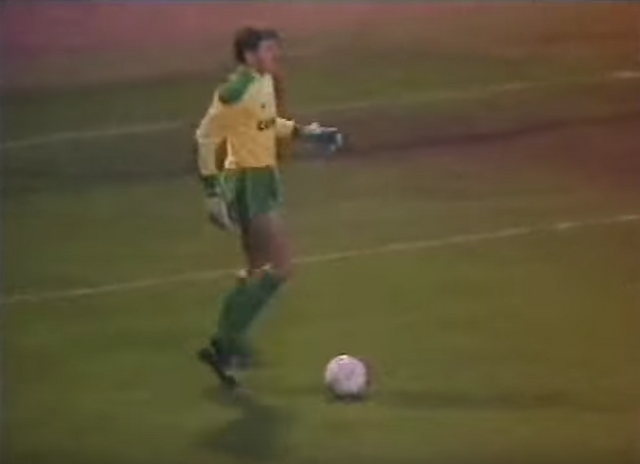 …the only player in the Celtic XI to wear a number on his back as normal, rather than the unique positioning front and rear of the shorts for outfielders so as not to break the sacred hoops (except during European games due to UEFA regulations): 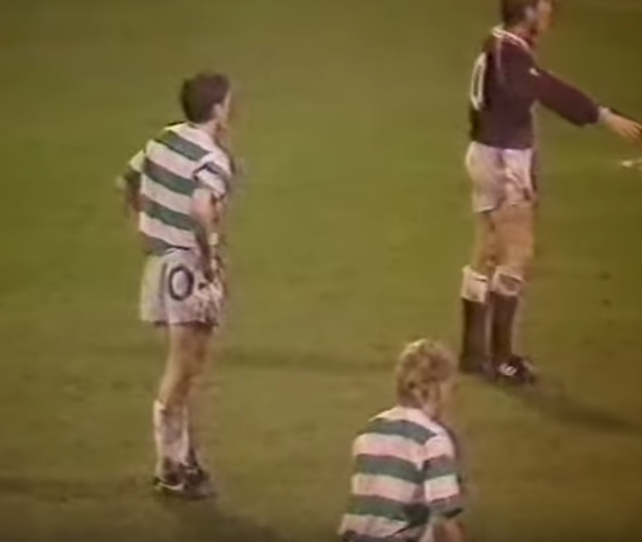 Soon there is a less expected but even brighter spark, first in the form a Celtic goal via a penalty to make it 1-2 with 8 minutes remaining. As goalscorer Andy Walker grabs the ball and runs back past the D of the box, suddenly a light coloured flare lands and bounces along beside him, miraculously missing a cluster of Hearts players:

The strength of the throw from the Celtic End, presumably celebratory in nature, is quite impressive. So intent on getting on with the game for his team, Walker the pro seems completely oblivious to the intense glare, which one might think would sneak into his periphery: 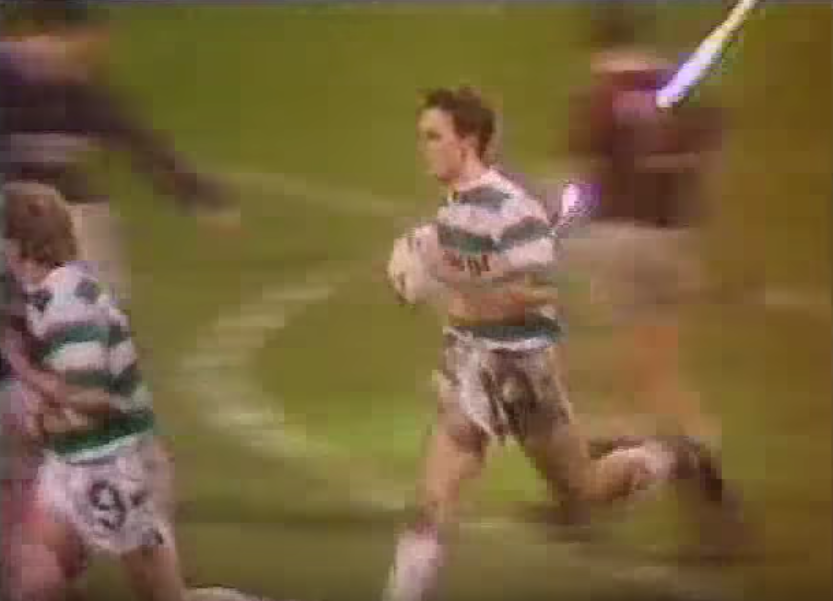 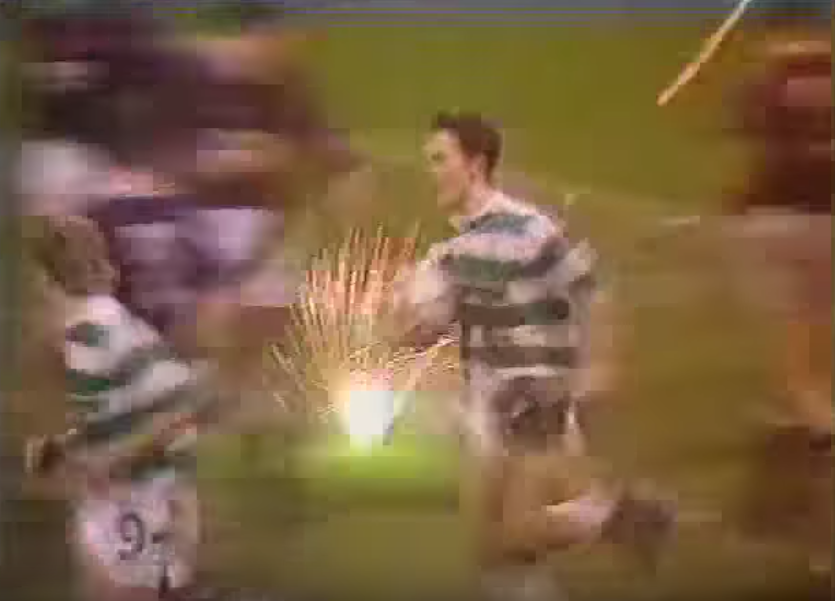 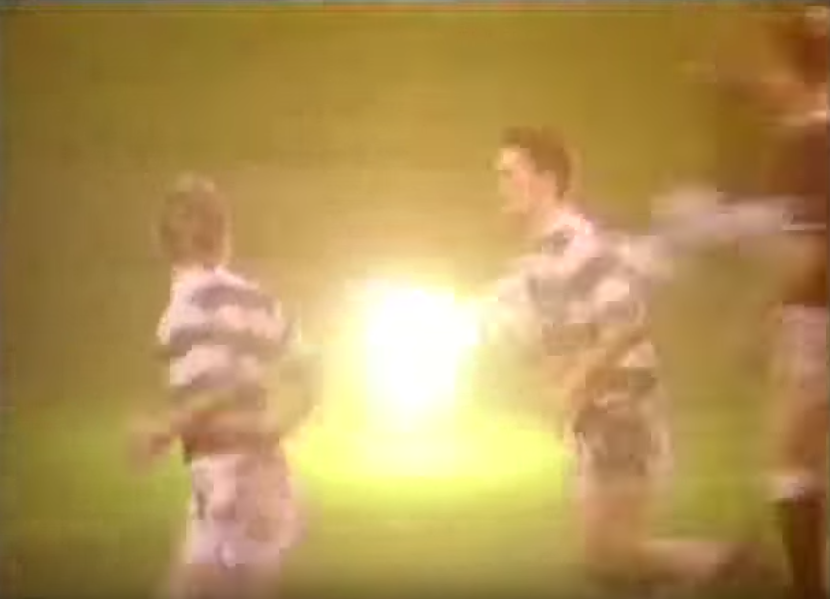 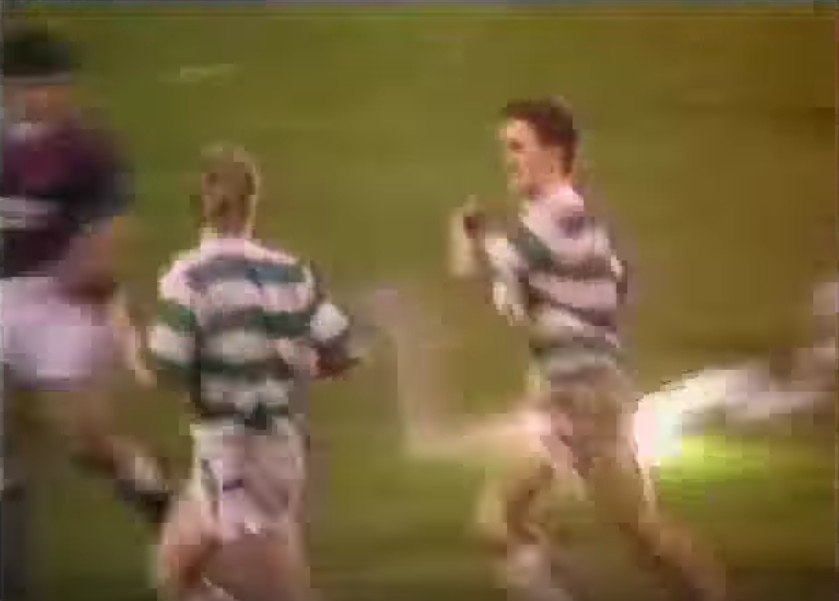 With just four minutes remaining – the Jungle now in hopeful full-voice – Paul McStay knocks one in to make it 2-2. It’s time for the home fans to really explode, although no pyro that we know of this time:

And that’s how it ended, with just a point a-piece, but a moral-boosting one for Celtic to help contribute to their eventual title canter. It would be a championship they would unknowingly need to enjoy, as the next 9 in a row were going to belong to Rangers. 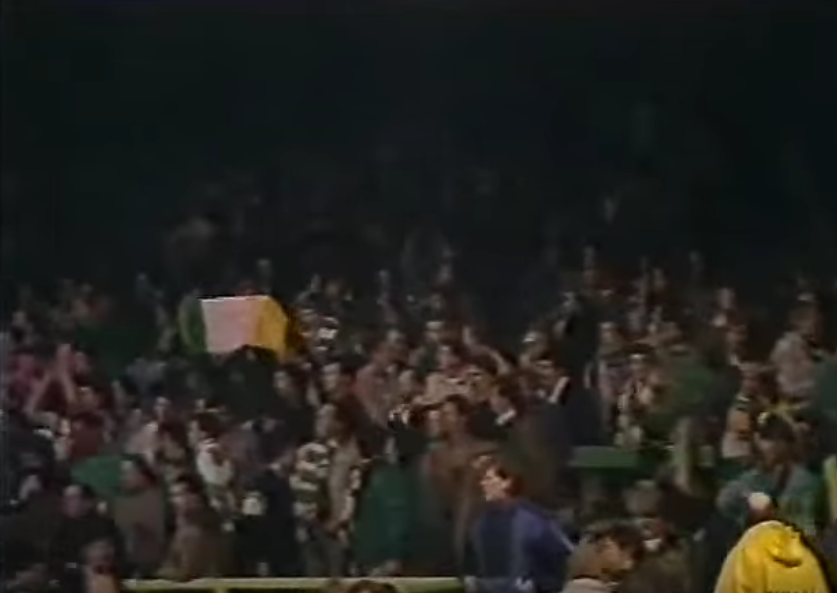