In the previous installment of People On The Pitch, we looked at an innocuous but telling pitch invasion involving a group of young Blackburn casuals casually walking around the pitch during an 1984 FA Cup match in Swindon. Instead of switching tack, we’re progressing on to the next round of that same season’s FA Cup and over to a slightly more serious affair in Birmingham. 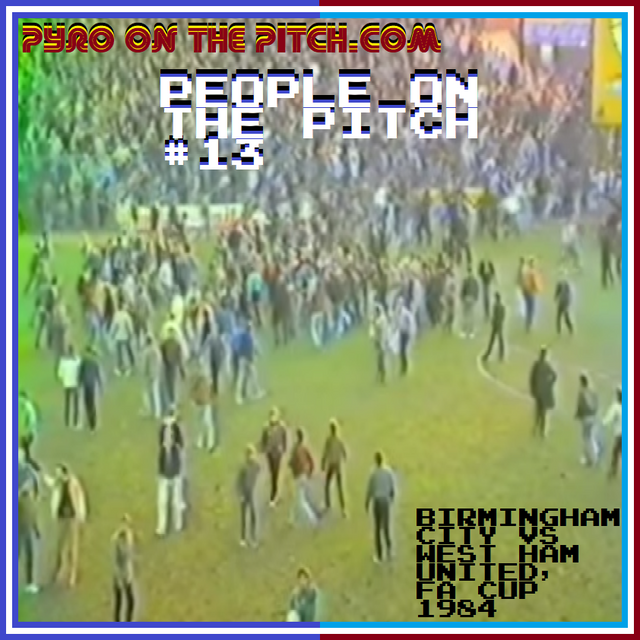 In 1980s England, the word “hooligan” and it’s derivatives struck fear into many a law-abiding citizen, never mind only those interested in the sport of football. The latter were more likely to have experienced the phenomenon first-hand, but, since the 1970s, violence, vandalism and trashing of property away from the stadium was also on the rise, bringing regular folk face to face with the issue.

Media stories and myths abounded about the scene – which had been developing it’s “dresser”/”casual” subculture since the end of the previous decade – and those involved took great glee at mainstream Britain’s dismay and outrage at their actions, and it’s fear at their general reputation. But to fans with a little more knowledge and experience, the names of certain firms in particular were more likely to strike up a faster heart-beat.

Among many’s list at this time were Birmingham City’s “Zulus”, originating in 1982, and West Ham United’s “Inter City Firm” – ICF, established in 1978. When the two clubs ended-up paired together for a big FA Cup fifth round tie – which meant more “local nutters” than usual bolstering the ranks of troublemakers – near “peak hooliganism” in 1984, logic suggested that the game would not go off peacefully. 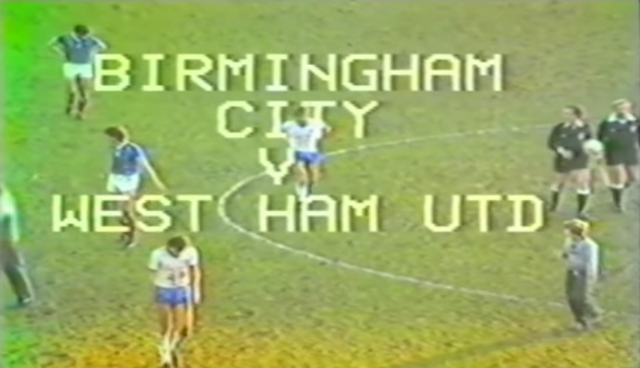 Birmingham and West Ham face off  on front of nearly 30,000 on a sunny FA Cup Saturday in St. Andrews, having eliminated Sunderland and Crystal Palace, respectively, in the previous round: 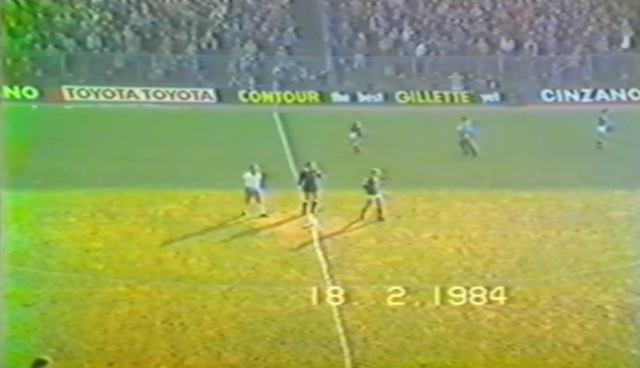 To the left are the away fans, filling up at least two sections: 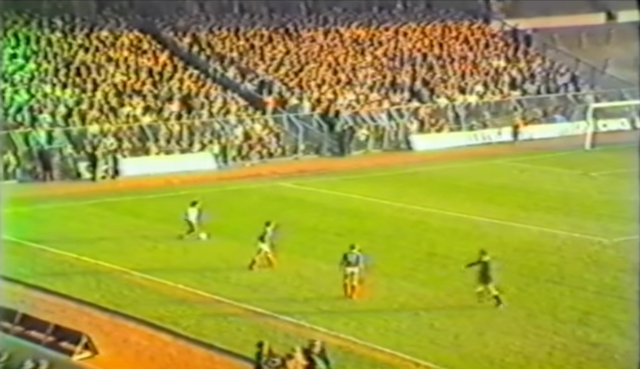 The West Ham fans are kept far away from the home support, divided by fences and a closed no-mans-land section in between: 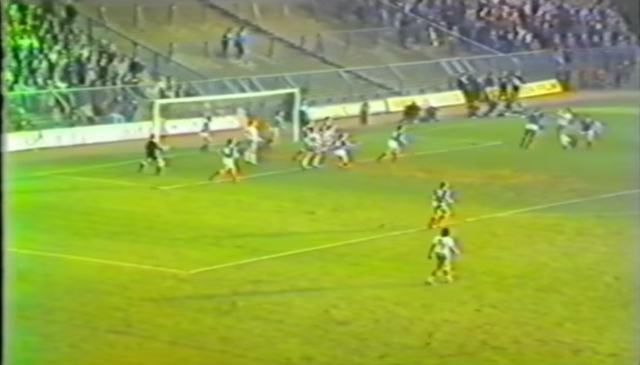 The anti-pitch invasion fencing continues along the side-terrace of the ground (see above) but then ends, leaving nothing to stop those in the seated (benching) sections behind the other goal: 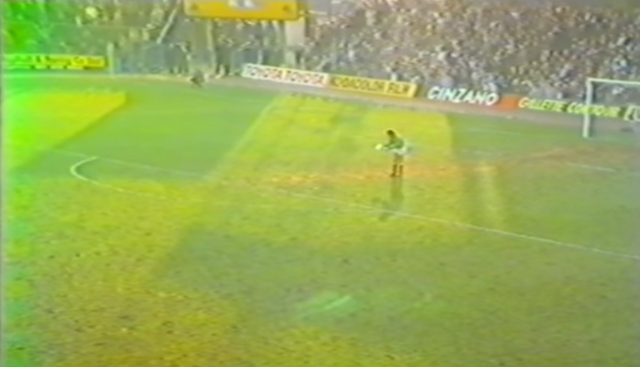 There is also no fence at the camera-side grandstand, on front of which some police are standing guard (as well as the end): 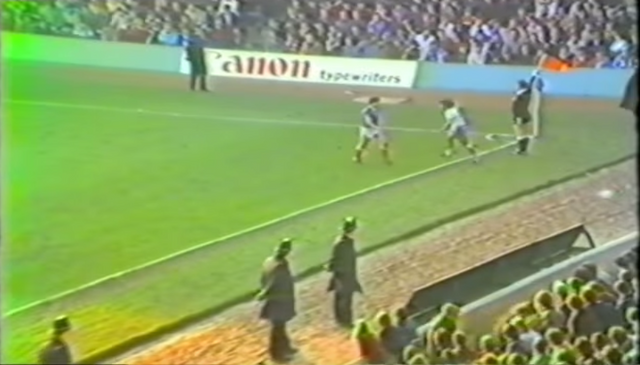 Fast-forwarding to second-half, Birmingham are 3-0 up and cruising towards an FA Cup quarter final place. As West Ham prepare a free-kick, some commotion can be seen in the corner of the ground, with home supporters in both adjacent sections moving toward the opening where a group of coppers are located:

Play continues as more and more “Old Bill” can be seen hurriedly making their way to that corner:

With the police distracted, suddenly a mass pitch invasion spontaneously breaks out on the other side of the ground and the referee halts the game: 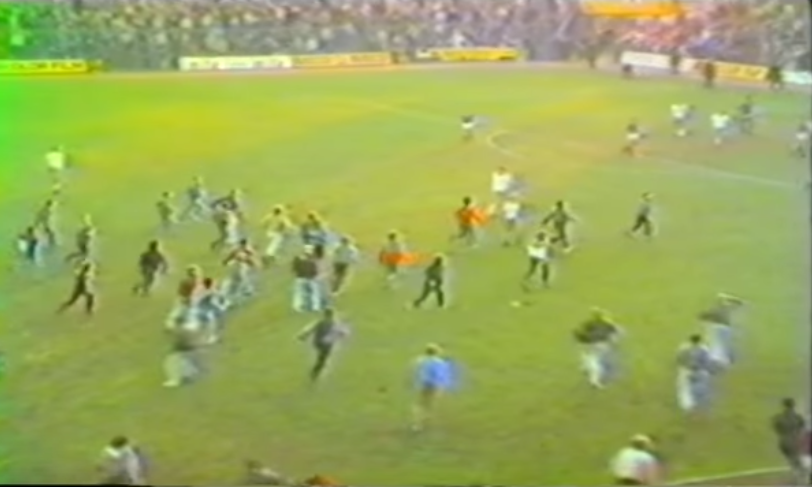 It turns out that quite a few West Ham supporters, many of whom young casuals, have infiltrated the seats of the grandstand. With their side already out of the game and their rival fans creating a perfect diversion for the authorities, the discordian opportunity is seized as the heard head towards the end: 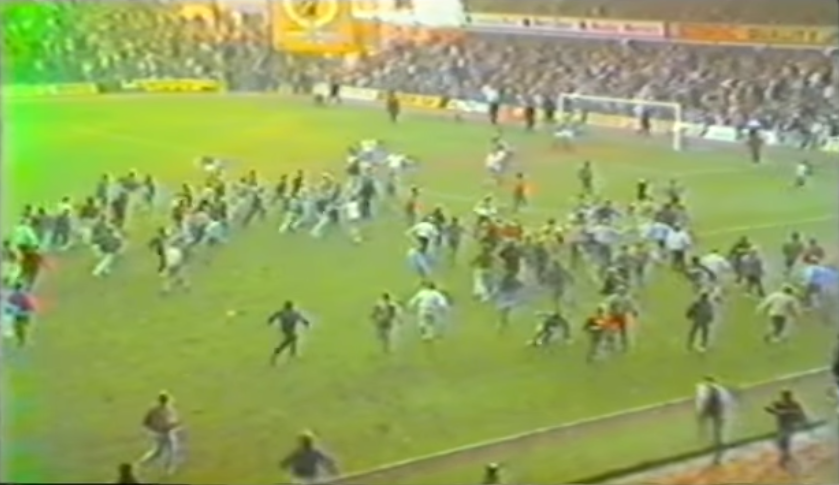 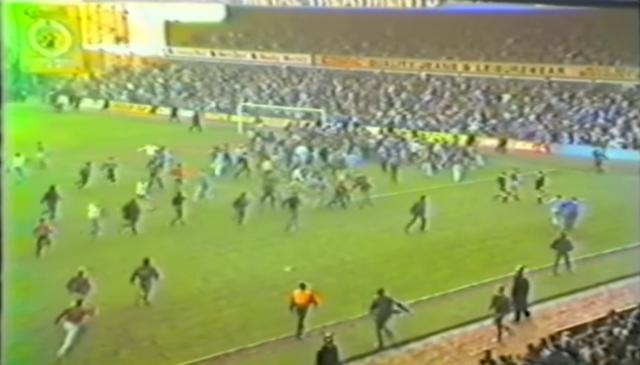 The home sections behind the goal scramble with some turning and fleeing from danger, while others rush past them desperately attempting to also get on the pitch. At the same time, the police regroup and run at the Hammers fans, sending most back the way they had came:

Two West Ham supporters, bottom-right below, can be seen fist-pumping and clapping, evidentially satisfied with a job well done:

By this time many Blues are also now on the pitch, with isolated policemen like the one below doing well to somewhat corral them:

While the authorities are happy to merely get most off the pitch, a hand-full of unlucky ones are dragged away to get nicked: 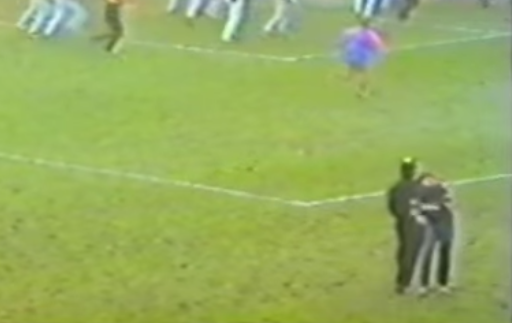 The home fans soon return to their positions behind the goal…: 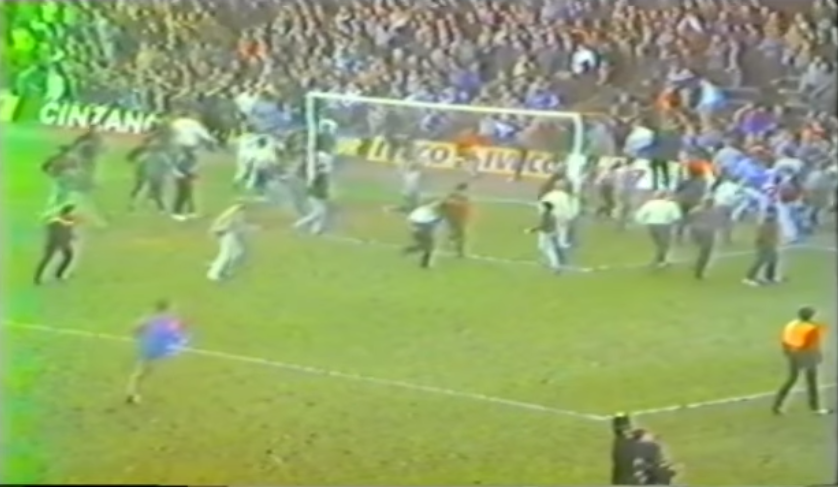 …as the wandering visitors make their way to the supposedly home grandstand: 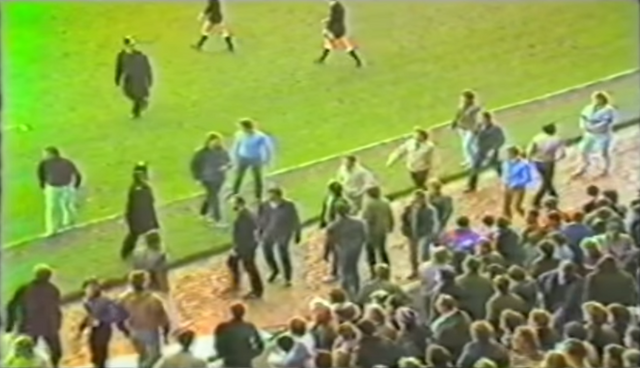 The match restarts, but minutes later a second pitch invasion breaks out again causing play to be stopped. Huge numbers of West Ham are once more involved, with many doubtlessly “game” Birmingham lads stuck behind the opposing fence as others on front scale it: 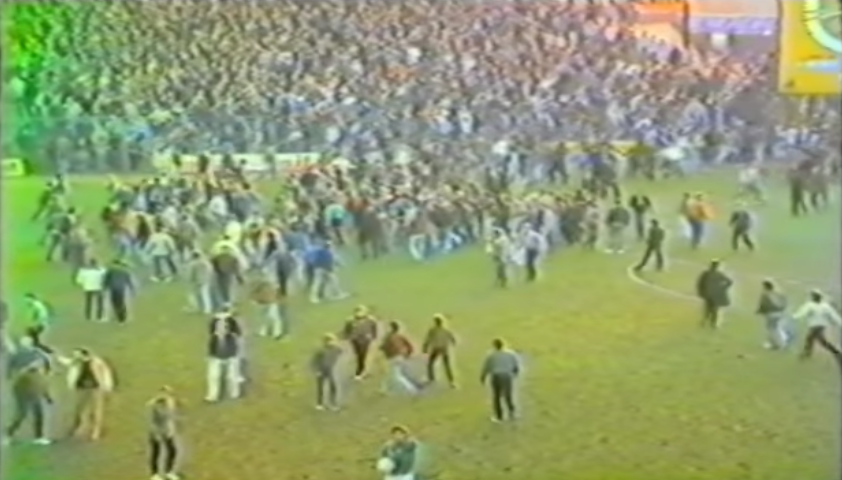 This time, a horse-back unit is introduced from the tunnel as the hooligans retreat: 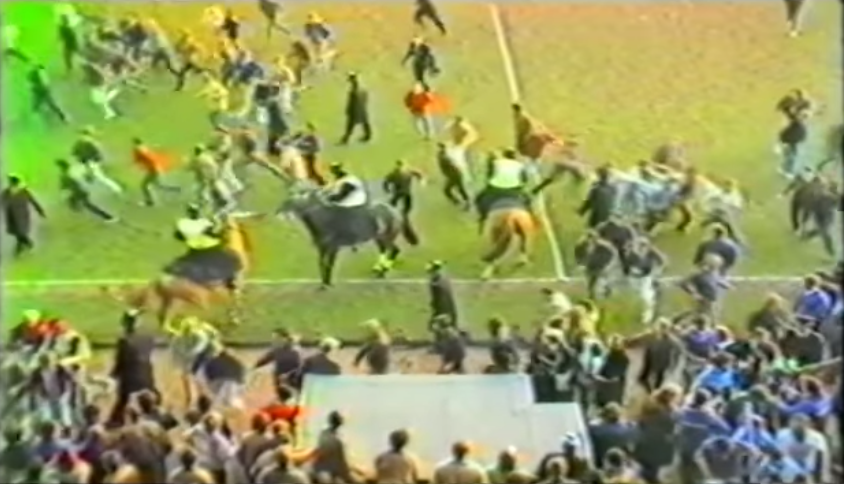 The match is once again restarted, with the referee presenting a hot-ball: For the final minutes, the horse unit can still be seen along the near side of the pitch…: 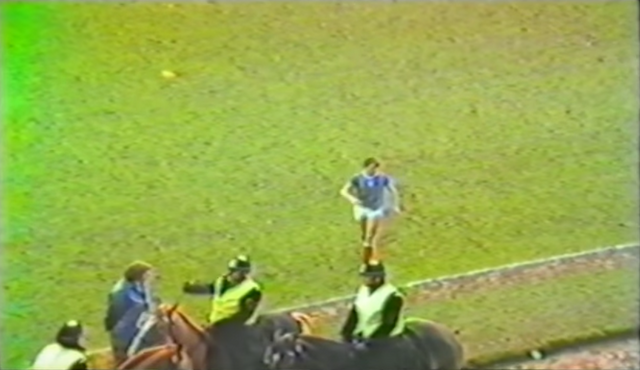 …as well as a noticeable police presence on foot around the rest of the ground: 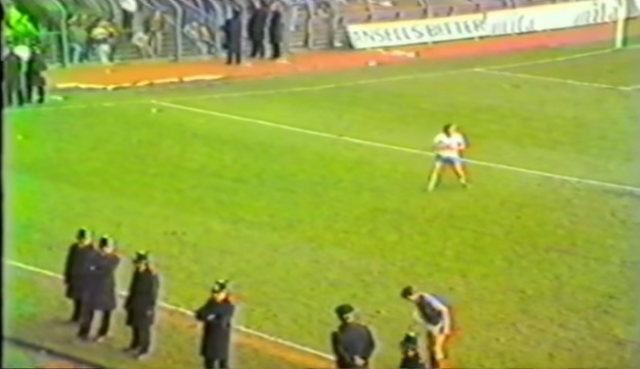 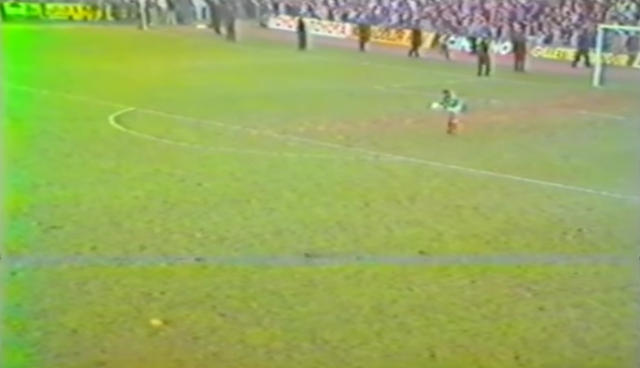 They keep a watchful eye as the referee blows it up for full-time. Some players, wary of more trouble, run quickly for the exit, but the main action for the day is over: 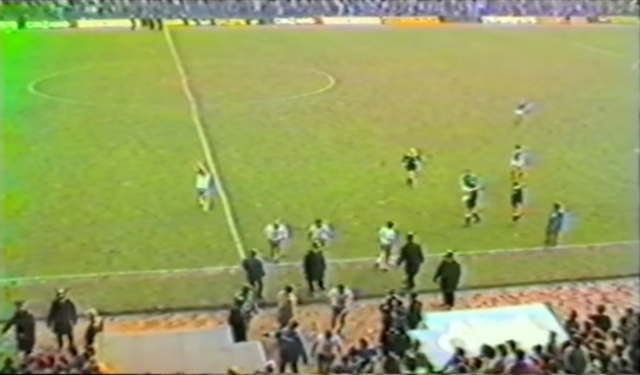 The incidents at the match were national news – the latest in a long line of hooligan episodes to be condemned by all sensible voices. It was reported that the invasions had been premeditated and organised, which was untrue; although the amount of Londoners who had made the journey north with the intention of at least causing mischief, meant that it didn’t need to be.

This journalist’s photo perfectly captured one of the West Ham pitch invasions in progress, with their fellow hammers watching on in the background, displaying the sort of style and age profile of at least some of those on the pitch. And this Alamy stock piture, aimed at the other end and some actual fighting, includes the caption “FA secretary Ted Croker was at the game, which he described as “some of the worst scenes I have witnessed on a football ground””.

To spare his blushes, hopefully Croker wasn’t in attendance again at St. Andrews about 15 months later for the tragic visit of Leeds – an occasion to talk about in full another time – to witness the scenes below upon the final whistle. Someone really should have erected those fences around the rest of the ground, as the ratio of “hooligan:normal fan” in Birmingham had only increased: