Click here for all entries in this series where take a close-up look at some of the spectacular jerseys in our own POTP collection (not to brag). 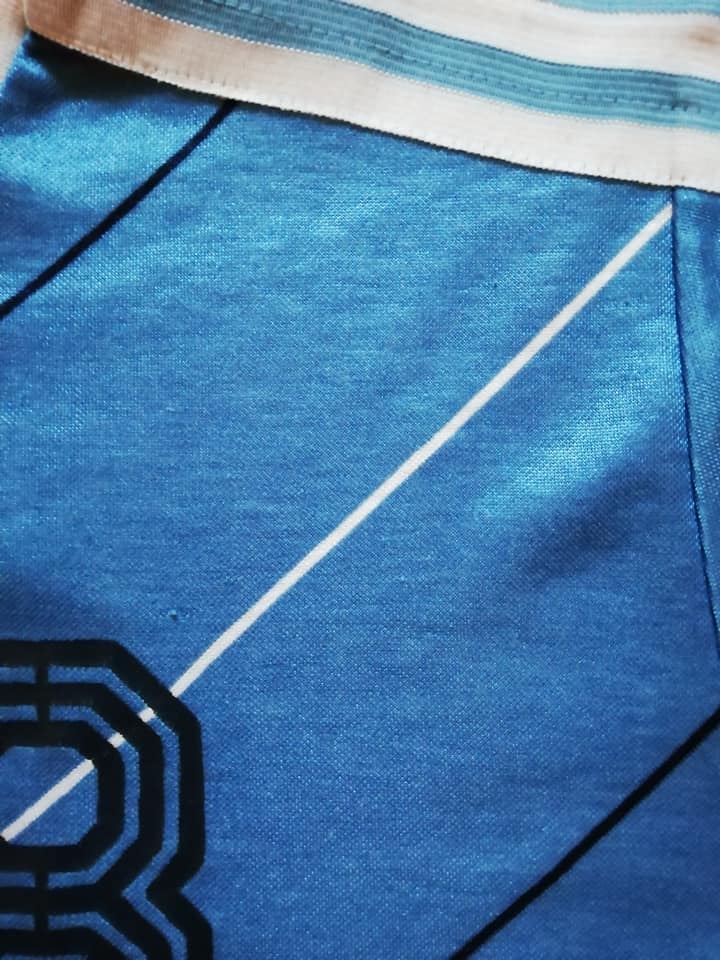 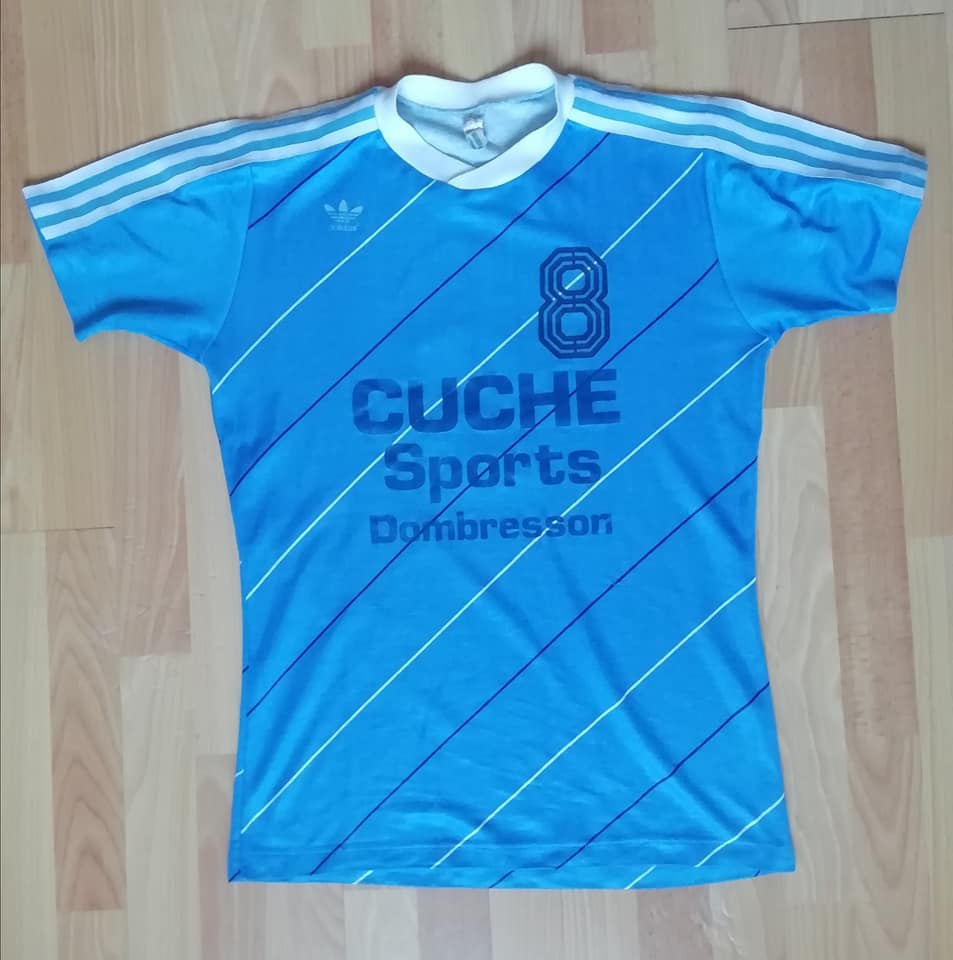 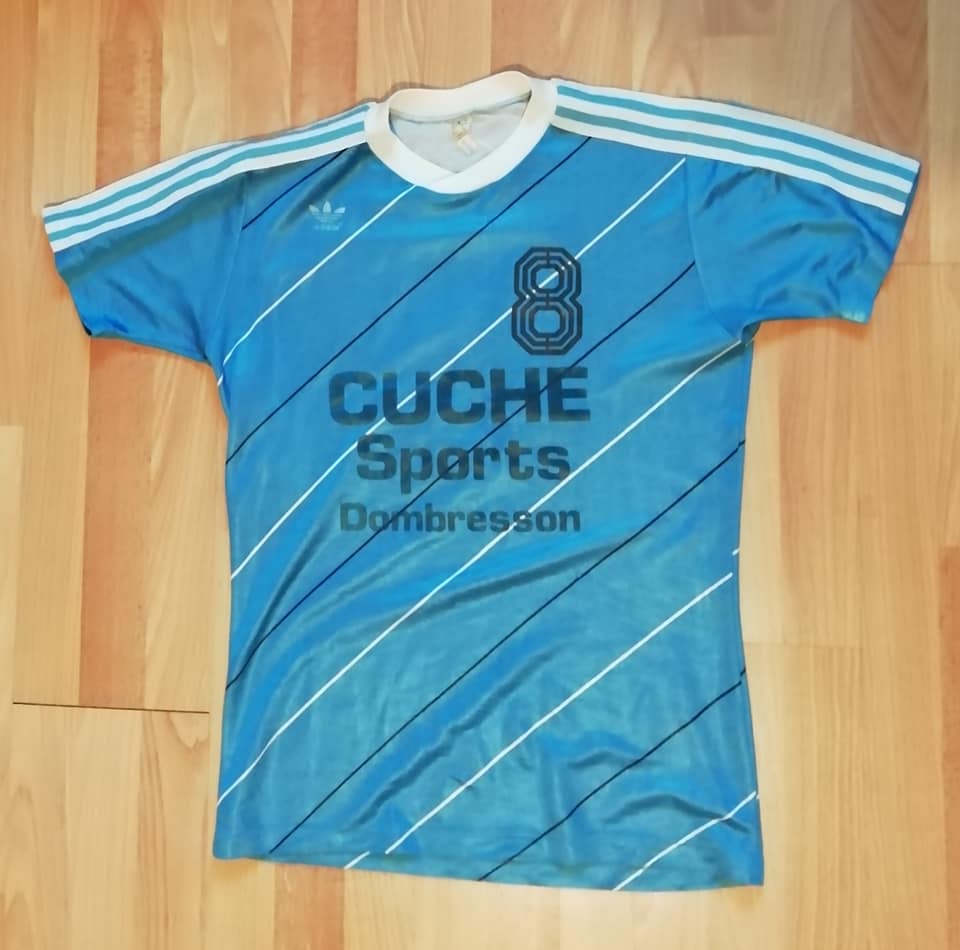 Whooah! Phwoar! Other expressions of sexual desire! You will forgive us, but all this comes to mind as soon as we set eyes on (let alone touch, caress and wear) this absolute stun-hun of a shirt. Just take a second to stare lovingly again, with particular attention to those alternating diagonal pinstripes. Oh Momma!: 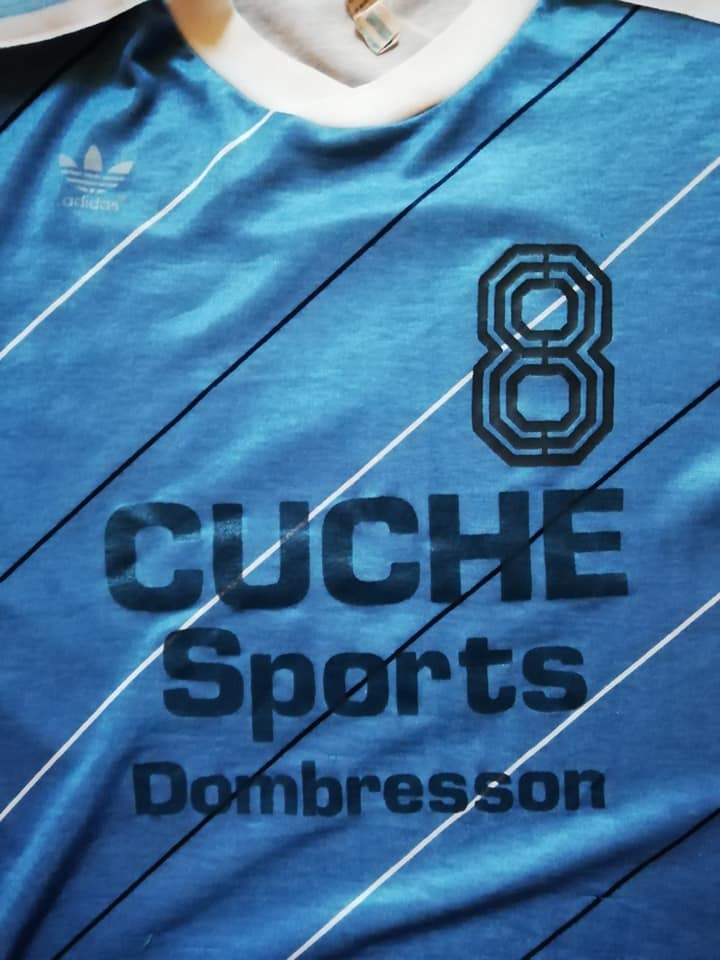 The template is the 1984 Adidas “Chelsea” – which we know the name of thanks to one of the most important Tweets of all time last year from John Devlin – and first burst onto the global scene at that years Euros worn by Portugal and Yugoslavia, and later elsewhere by the likes of Bulgaria, USA and USSR. One thing these countries had in common was three colours to play with, unlike Sweden who’s simple yellow and blue colourway meant that the pinstripes weren’t alternating on their version (seen here in one of our Cold War Classic posts on MuseumOfJerseys.com).

Similarly, Hellas Verona basically used a model-Swedish away strip for one game in the 1984/85 season with the non-alternating style (as seen here on Soccernostalgia, thanks to them for this info). The biggest club side to wear it, though, were Bayern Munich, who’s white and blue stripes over red background may have been the most aesthetically pleasing application of all (also used by Switzerland briefly in 1987) if not for this stunning USSR away 85-87 just about pipping it in our book. In 1986 the template even transcended both club and country, after it was selected for both teams’ strips in a Unicef “The America XI vs FIFA World Stars” match in California (again thanks to Soccernostalgia for this).

Going back to our own sky-blue treasure with white and navy pin-stripes, it actually would have made a perfect Dublin GAA jersey in 1984 if O’Neills had chosen to rip-off that particular design back then (they only recently have). The three – in this case kind of overshadowed – sleeve stripes are white with two sky-blue in between, which differs to the Portuguese’ preference for using both secondary colours and with three green/two white:

As for what team wore this particular jersey, all we have to go off is the fuzzy-felt sponsor Cuche Sports Dombresson, leading us to the logical conclusion that they probably were an amateur side hailing from somewhere in the Swiss city of Dombresson, or at least nearby: 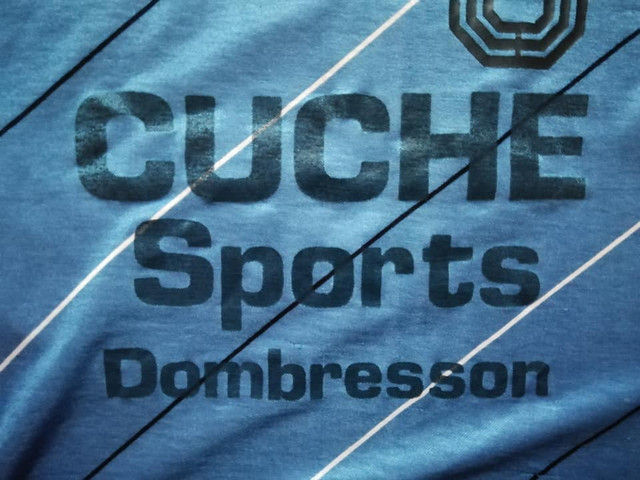 Upon Googling of said Cuche Sports, which we’re guessing was a sports shop, we were able to locate a particular address for it on some Swiss listing sites. But the fact that the image below appears when one enters the address in Google Maps, meant that we felt confident saying “was” just now: 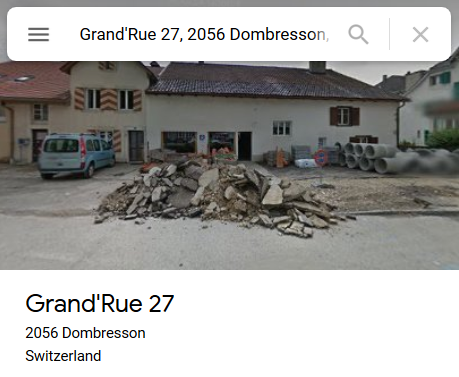 Moving back upwards from sponsor to brand logo, the trefoil is the regular early 80s semi-slit version with smaller wordmark (also seen in RSR9 and RSR10), half-way between the large, fully-slit late 70s trefoil and the classic “non-slitter” that most folk know and love as the only one (seen in RSR11): 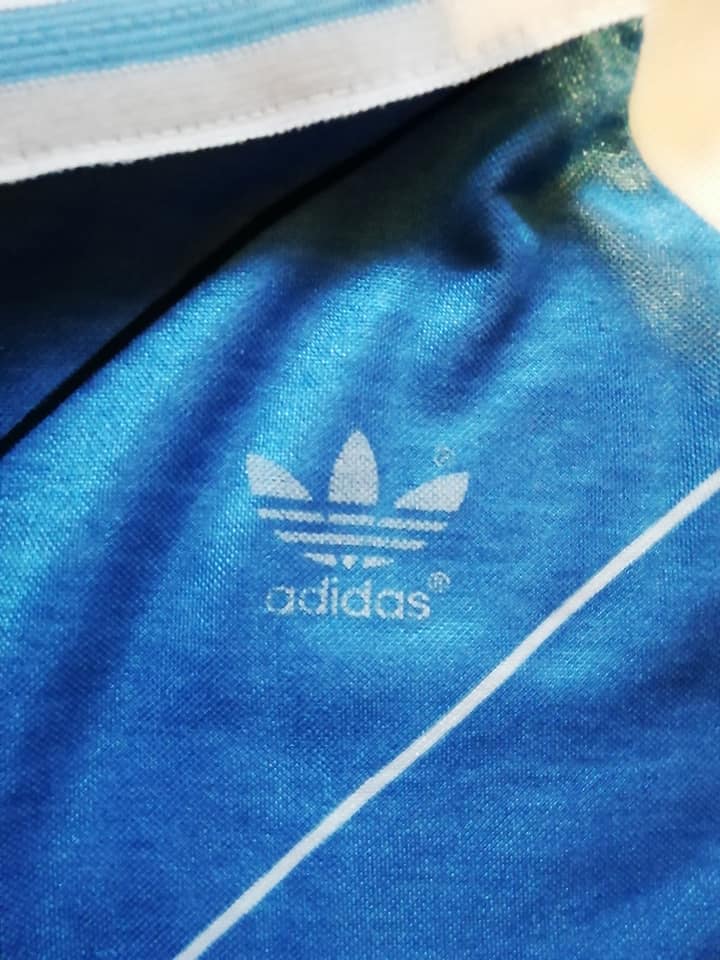 Lastly for the front, and quite importantly considering how rare this feature was at the time in general let alone on a club shirt, is the mini-number 8 that sits roughly where a crest usually would. The font is a quite incredible variation of the classic Adidas style, with extra angles and lines: 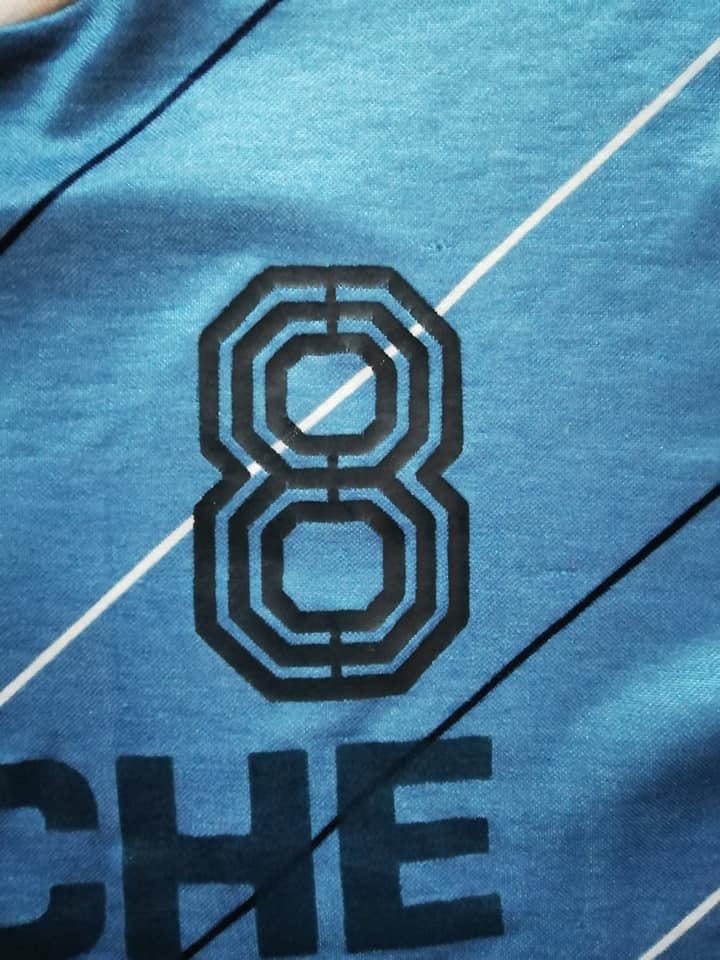 We know for sure that the Swiss national team also used this style of number, meaning that maybe it was just “a Swiss thing”. The same, but larger, is of course on the back to finish things off in style (8 as a digit is one our faves too): 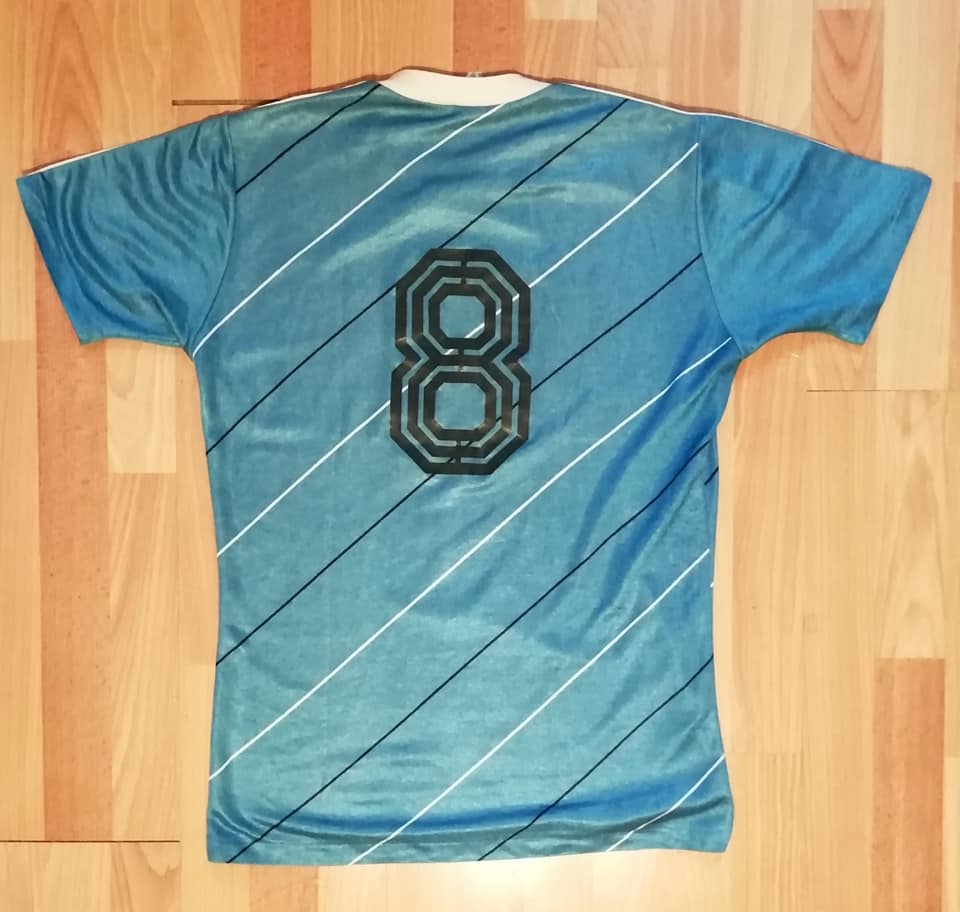