The previous installment of Pyro On The Pitch – that being our flagship and earliest series here on PyroOnThePitch.com – featured a not-so-usual backdrop in the Scottish top flight of the 1980s. We continue that theme now by shifting south to a time and place renowned for football trouble, but not usually pyro. 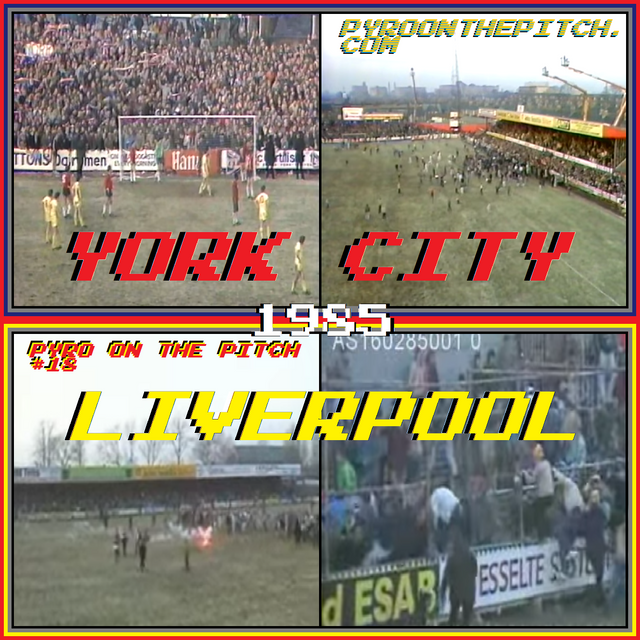 While England has been known as the home of the “football hooligan” since the 1960s, and went on to greatly influence supporter styles in the likes of Italy and eastern Europe, something that seemed to be missing compared to more continental or Latin flavours (including South American) was pyrotechnics. At least that’s what one might assume, but the ingenuity of trouble-makers meant that English pyro was actually around in some form since the mid-1970s, with a particular Mancunian instance in mind that we will come back to at a later date.

There was smoke in London, as seen above, via Chelsea’s Shed by the late 70s – again this was on the “chaotic” side of the scale and aimed at police, rather than the “passion driven pyro” of mainland Europe. When fellow Londoners West Ham went to Newcastle in 1980, their fans experienced an even more extreme form as a petrol bomb was thrown from home hooligans at a section of away support during the match.

The Hammers might actually have been inspired by the idea as two years later away to Arsenal, West Ham’s Inter City Firm occupied the home North Bank and a smoke-bomb was released in the ensuing mayhem. Of course there are probably many other examples during the English hooligan heyday, but these are the ones that we had evidence for off hand (plus what we’re going to get to below).

Moving away from pyro we come to the other side of the tale in York City, who in 1984/85 had just been promoted from the English Football League Fourth Division to the Third. Promotion was followed up by their best cup run since reaching the semi-finals in 1954/55, when they had become the first third-tier side to to take an FA Cup semi-final to a replay.

In November 1984, York started their FA Cup campaigning by defeating non-league Blue Star Newcastle 2-0 at home in Bootham Crescent, before K-O’ing Hartlepool by the same scoreline in Round 2 in December. The “Minstermen” (as in York Minster cathedral) avoided the now-entering bigger teams in the third round, instead receiving a kindly draw in Fourth Division Walsall who they beat 3-0 on January 5th, 1985.

Of course a First Division side would have been preferable for the gate receipts and prestige, but now that they had made it through an even more glamorous game might await. And sure enough it was to be the world-renowned Arsenal, who had last won the Cup in 1979, next visiting Bootham Crescent.

That fourth round encounter gives us a good look the charming ground, the York crest TV graphics, and the packed Shipton Street End terrace: 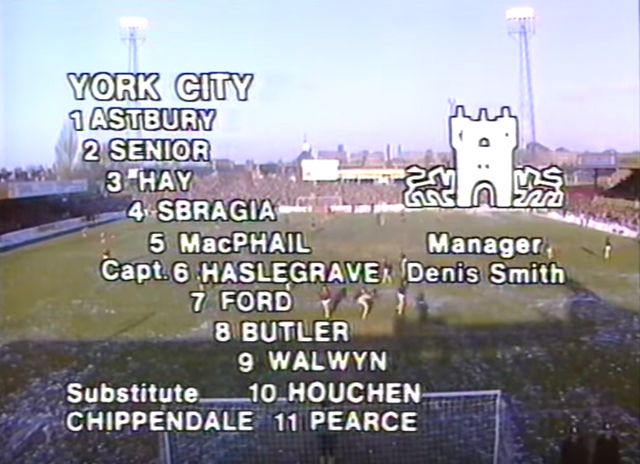 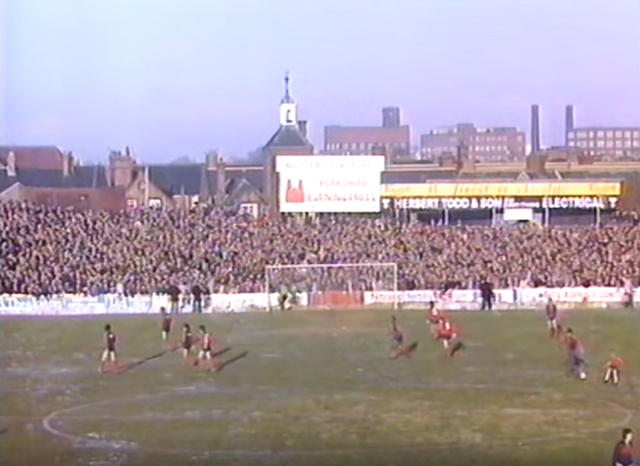 Before kick-off there are raucous scenes, as fans savour the atmosphere of what is about to be the biggest game in many of their lifetimes (for now):

We’re also loving the brick dugout and white picket-fence (orange behind the goal)…: 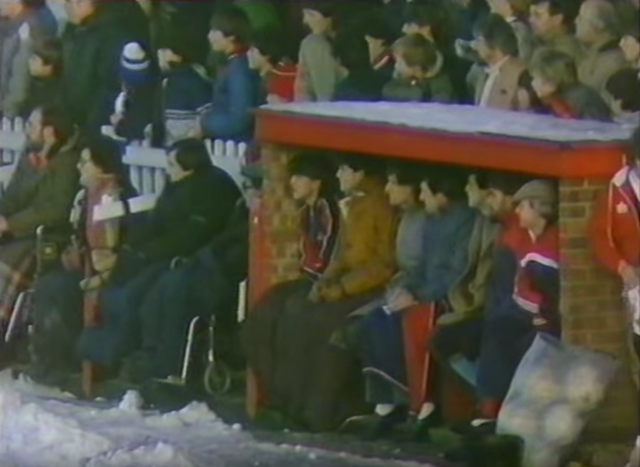 …and watch out for catering when taking a corner late in the second half: 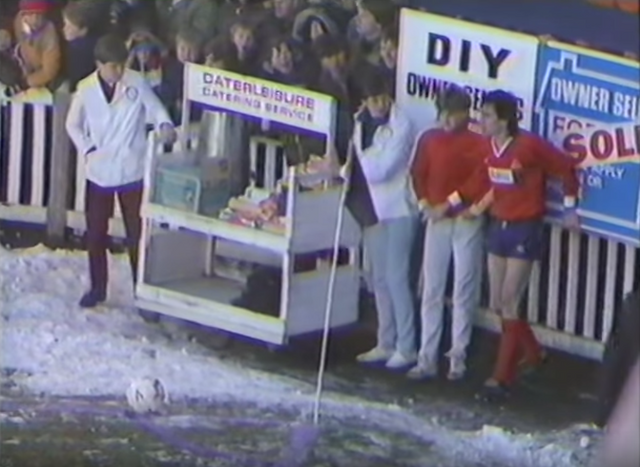 The February snow still covering much of the pitch added to the aesthetic: 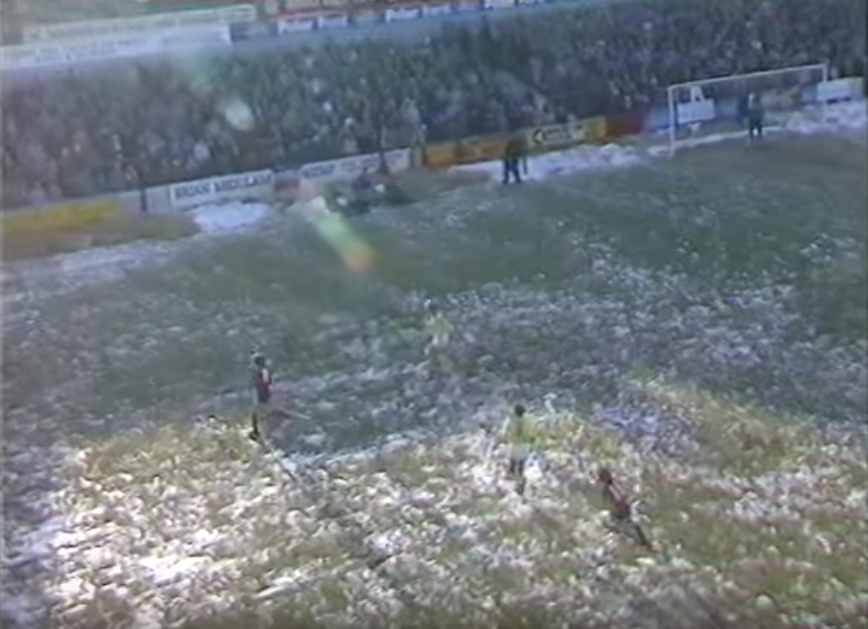 The away fans are positioned behind this goal to the left. Take note of the fact that there is no containment-fence around the pitch, as it will become relevant later: 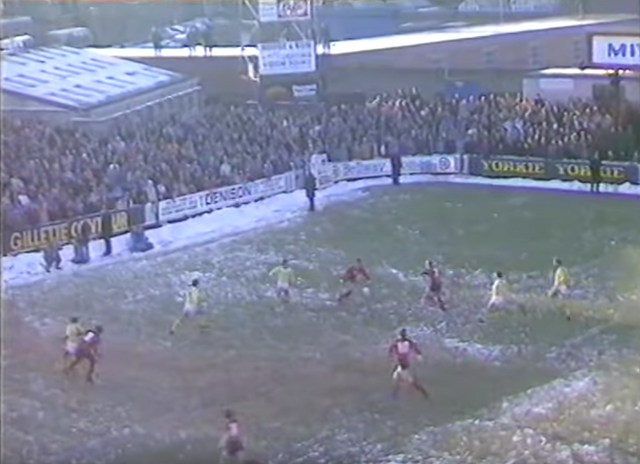 As you often hear after such an event at this time, the pitch invasion that follows is described be John Motson on commentary as the fans responding “in the obvious manner”:

Upon the final whistle, naturally, another pitch-invasion to celebrate the famous win, but an equal amount of Arsenal supporters:

Among York City’s potential opponents in the next round were Manchester United, West Ham United, and Everton. But the name that came out was the biggest of them all at that time, league and European Cup holders Liverpool.

One of the most densely packed areas is of course the uniquely shaped Shipton Street End, with every available inch occupied by home fans: 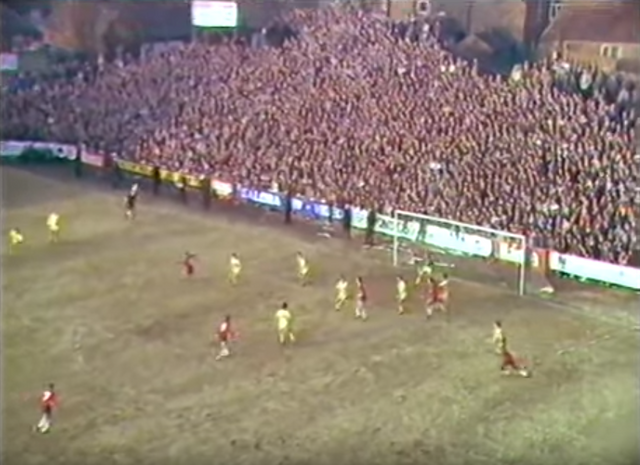 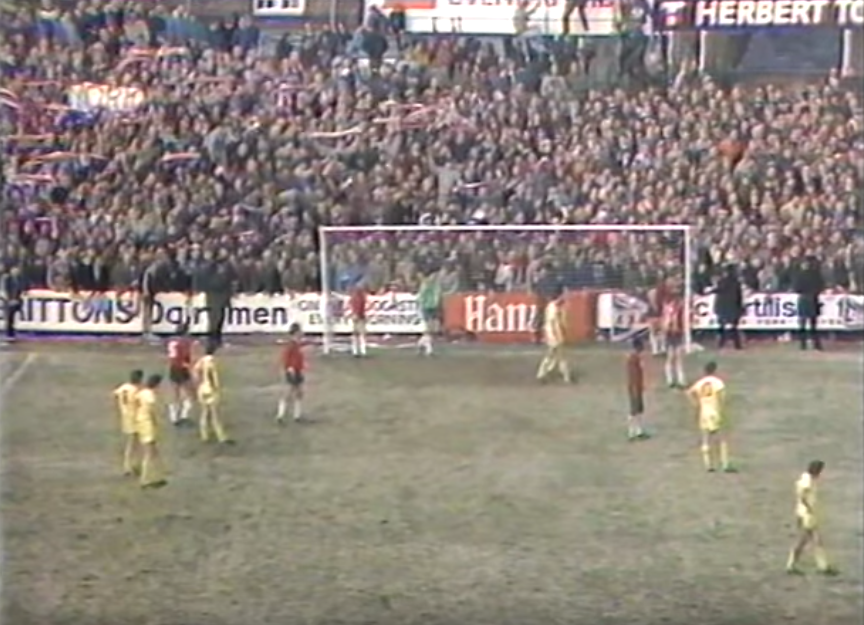 An sea of roofs and chimneys sprawl out in the background, exactly what you want to see from a league ground: 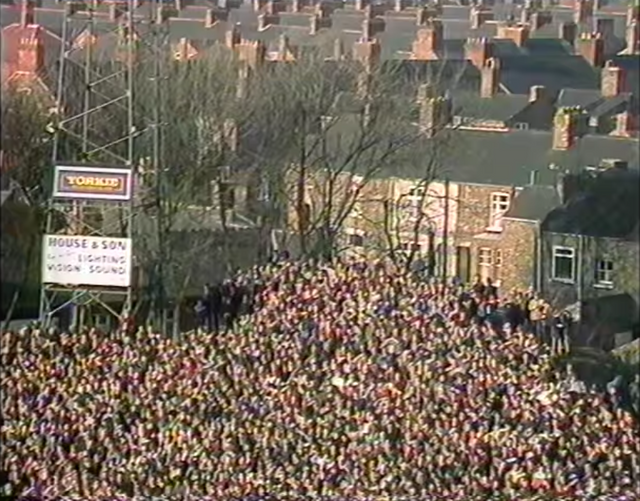 The visit of Liverpool has clearly been deemed a higher risk affair than Arsenal, as at the other end fences have now been erected to contain the large number of traveling fans: 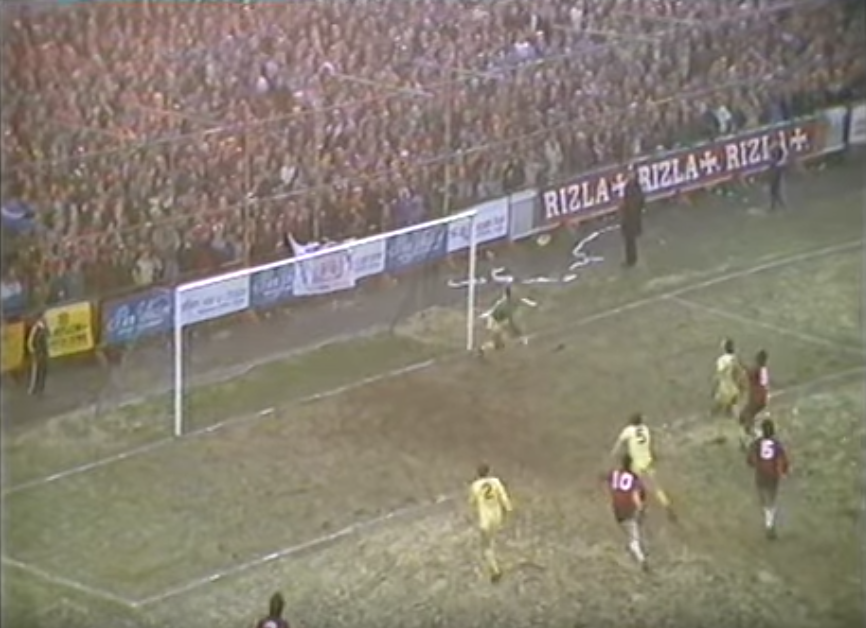 The away support extends around the side to a compact terrace (insert cliche about Bootham Crescent being a far-cry from the great stadia of the continent that Liverpool were used to visiting) and the fence follows: 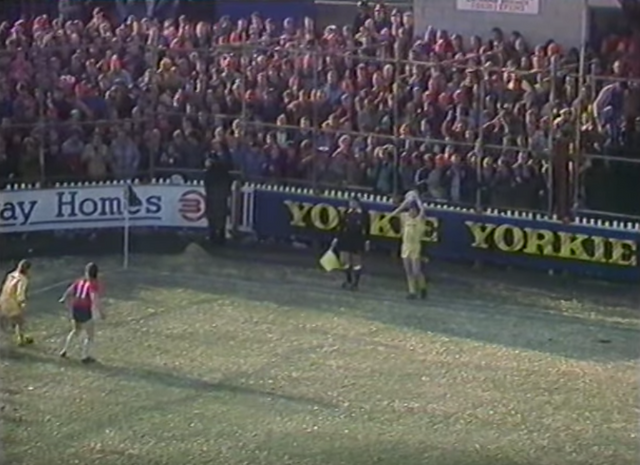 But then the fence continues on to cover the first home section after the police cordon: 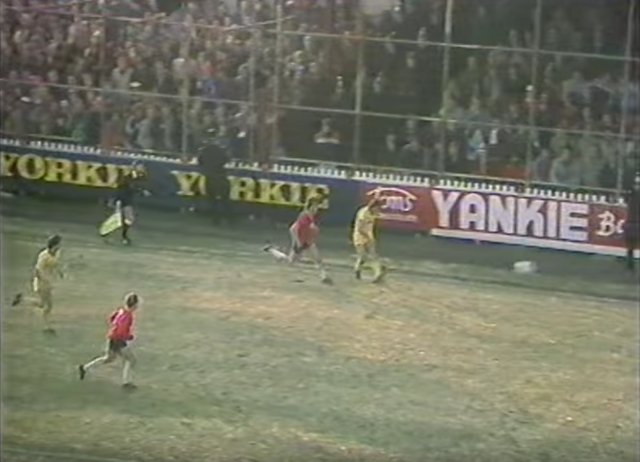 Perhaps this had been a precaution or misunderstanding regarding the allocated number of away fans: 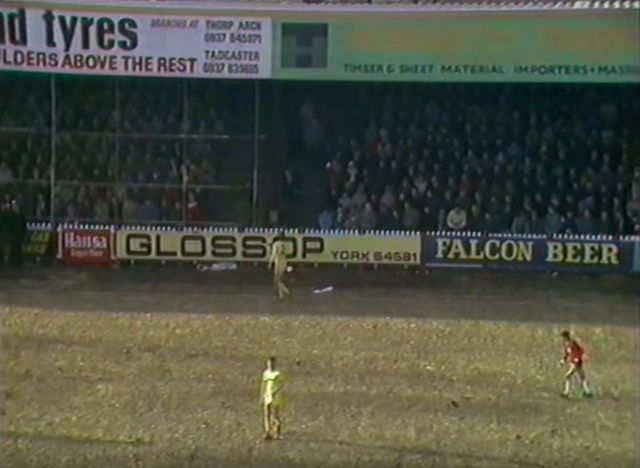 At the home end there are still no cages, just the wholesome smacking of hoardings from youths:

And soon celebrations as the ball is in the back of the net. It’s ruled out for offside, but at least we get a nice avalanche:

Another thing to note is the excellent composition of the pitch as the light coloured areas are in fact straw, plus this great Mitre Delta ball: 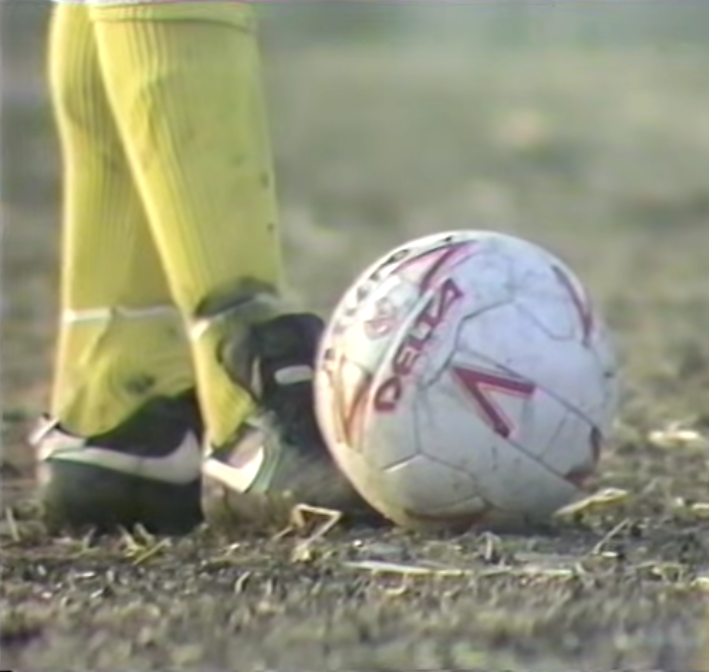 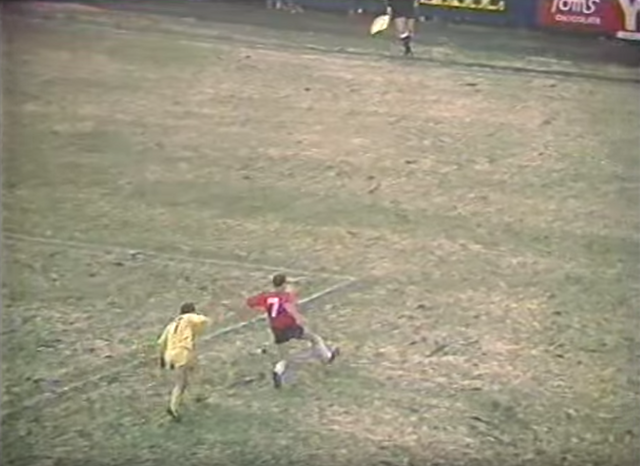 The straw helps to create a nice sense of “farm nostalgia” as the afternoon sun hits: 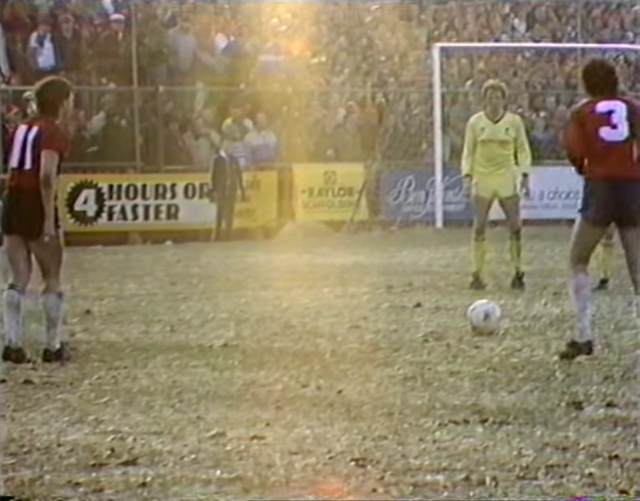 Early in the second-half Ian Rush puts Liverpool 0-1 up, indicating that the cup fairy-tale is over. In the dying minutes, however, Scottish defender Ricky Spragia incredibly finishes a crazy sequence (including the ball hitting the cross-bar twice) to make it 1-1, inducing one of our favourites from the away section – the “sway of defeat”:

At the Shipton Street End, the opposite:

Despite Rush thinking he’d scored again in injury time, along with the rest of the ground (another disallowed goal), the draw is secured . York are going to Anfield:

The players disappear into the interesting main stand, which haven’t had a chance to reference until now..: 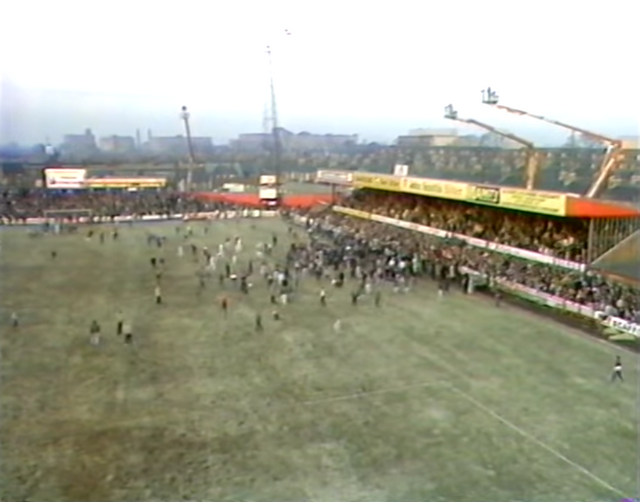 …leaving a large crowd now milling about the centre of the park: 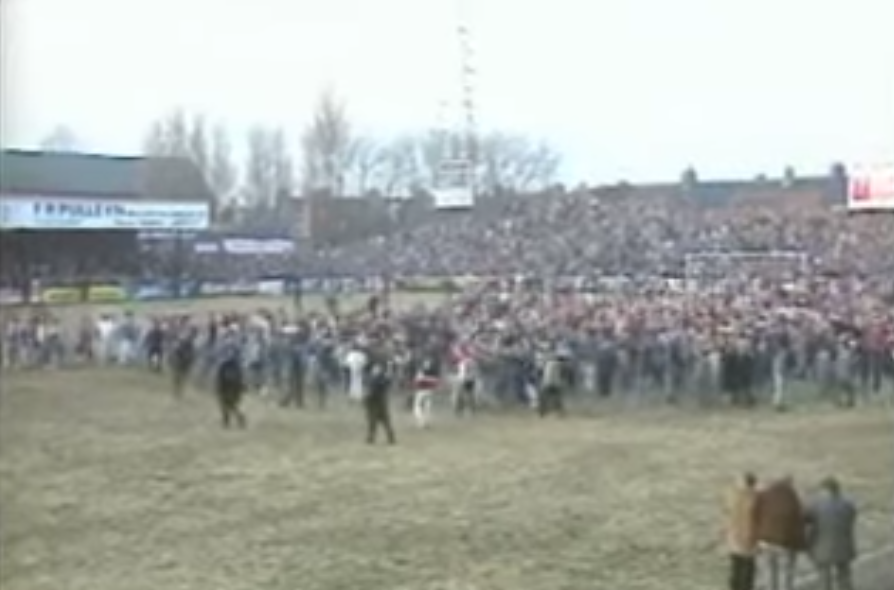 But then, the moment of truth. From the Liverool end comes flying not a smoke-bomb (nor a petrol bomb), but a legit, bona fide flare:

Perhaps influenced by the tifosi at Roma’s Stadio Olimpicio during the previous years European Cup final, among other ties, this seems to be one of the earliest pieces of evidence of a flare specifically being used at an English game: 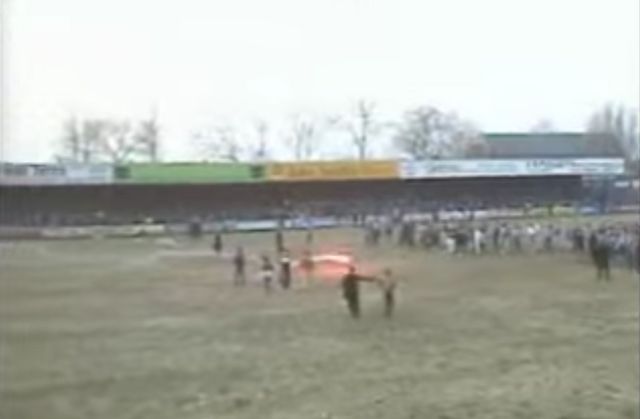 Edit: We since came across/remembered this incident from Millwall vs Chelsea on 09/10/1984, predating York vs Liverpool by several months. 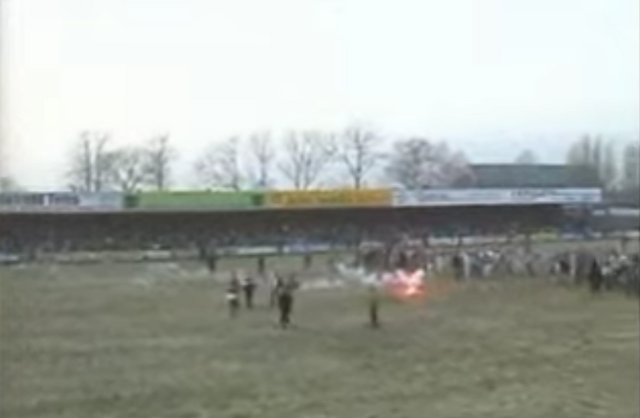 The launching of the pyro serves as a warning shot, as a shortly afterwards supporters of the massive European giants break through the fence (it’s erection now somewhat justified in the wake of this response) and charge at what must have seemed like upstart minnow fans having a great time at their expense: 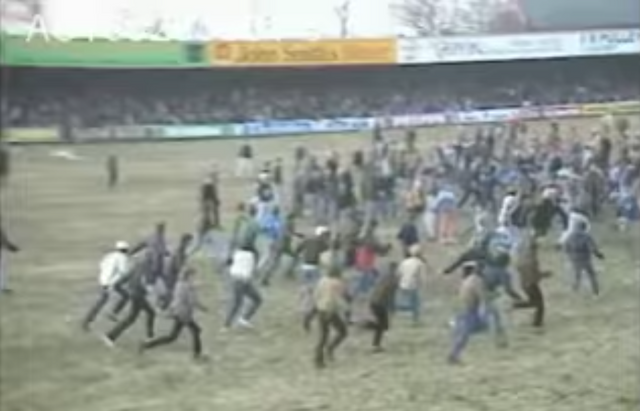 Until now the coppers have oddly been in between standing and sitting away fans, but police horse and dog units are soon on the scene as the Liverpool boys retreat. One fan expertly bamboozles both a dog and it’s handler by just casually walking off with a “yeah I’m going” gesture, sending the K9 unit in the other direction:

Those who were on the pitch clamber back through the easily made holes in the fence which had allowed them to access it: 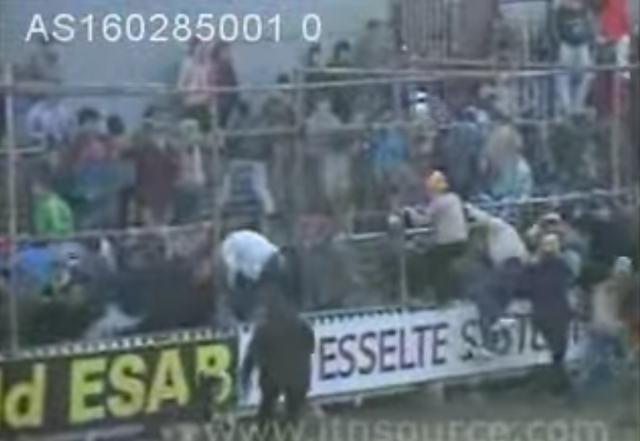 Aftermath: The return game was emphatically won 7-0 by Liverpool and you might think that York cup dreams ended there forever. But, astonishingly, one year later they ended up in the exact same position, drawing 1-1 with Liverpool in the FA Cup fifth round at Bootham Crescent to take the tie back to Anfield.

In the 86 replay a more respectable defeat of 3-1 was suffered, but this time it really would be the York’s final appearance at such an advanced stage of the competition for the foreseeable future (at least at the time of writing). The closest they have come since was a fourth round loss to Fulham in 2002 (having knocked-out Colchester and Grimsby in the previous two rounds), and at present unfortunately find themselves in the 6th tier of English football.