Out of the previous four entries in People On The Pitch, three have been focused on English club games and one on 1950s Northern Ireland. Click here for these and more, but now it’s definitely time for an overdue trip to a non-English speaking country again (although still very much Germanic). 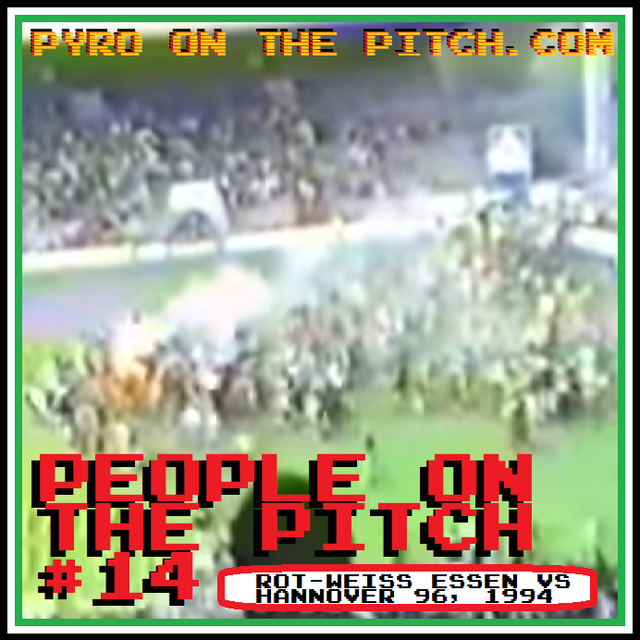 For this installment we’re looking at the last day of the 93/94 season in Germany’s second tier, the “2. Bundesliga”, and Hannover 96’s visit to regional rivals Rot-Weiss Essen. While the home side were already relegated, with financial penalties later rendering all their results void anyway, Hannover needed a win to assure they would stay in the 20 team division.

At year earlier, when the league had consisted of a massive 24 clubs due the continuing integration of former East German clubs since 91/92, a mid-table Hannover went to St. Pauli who were in the same situation – needing a win to stay up. They got it and so by a point avoided the giant 7 team relegation zone.

About to replace some of those going down was Oberliga Nordrhein champions Rot-Weiss Essen, one of three Oberliga winners who would make up a trimmed 2. Bundesliga in 93/94. Rot-Weiss had reached the top-flight in the 70s before a slide back down to regional level, until this season provided not just a brief stint back on a national level but a run to the 1994 DFB-Pokal Final also (a losing effort to Werder Bremen). 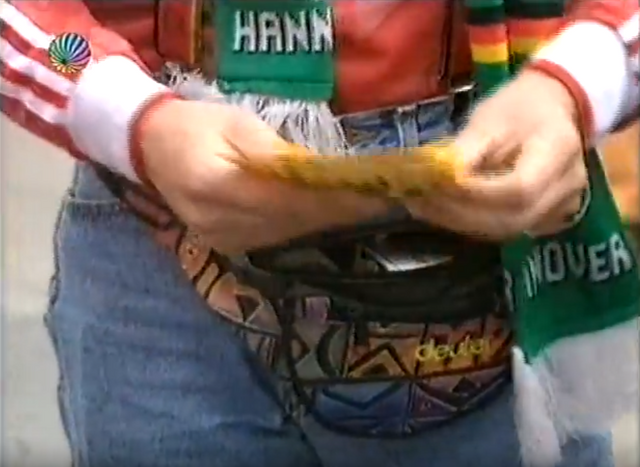 Thousands make the comparatively short journey – 2 hours by train – from Hannover to Essen, with some supporters of other clubs in between, such as Hamburg and Dortmund, joining them along the route (reported here, a good source of information for this game):

Away fans leave their transport in good spirits:

In the ground they are located behind one of the goals…: 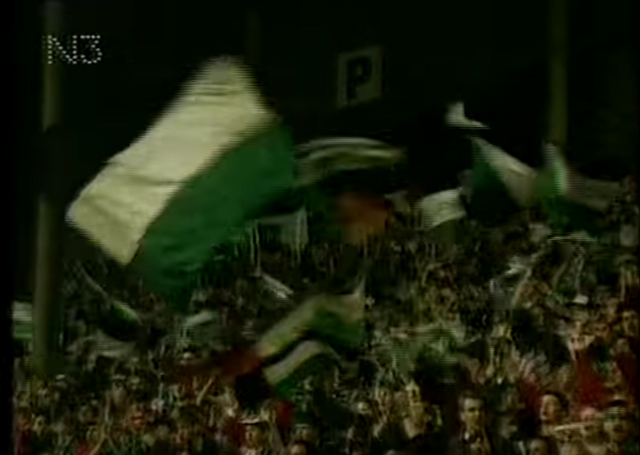 …with some allowed on the grass before the game to drum: 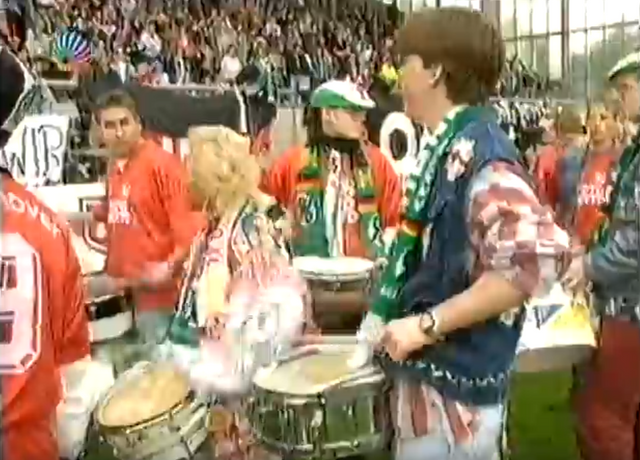 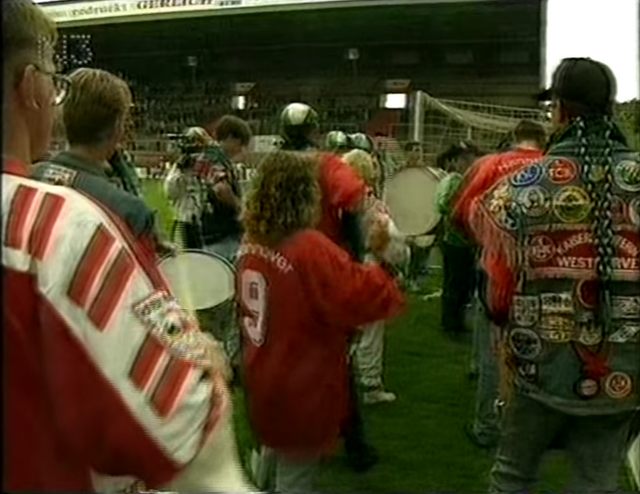 Hannover’s veteran manager Rolf Schafstall smokes pensively as the game gets underway and his side look to secure their needed points…: …while others keep an ear on scores elsewhere:

During play we get some shots of the Hannover array of banners, including “Schaumburg Ultras”…: 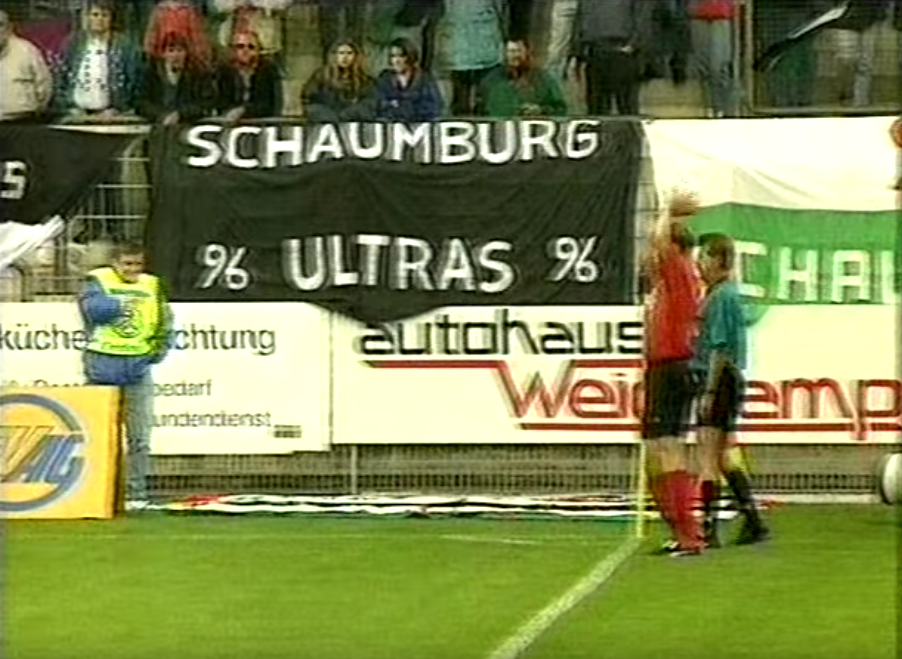 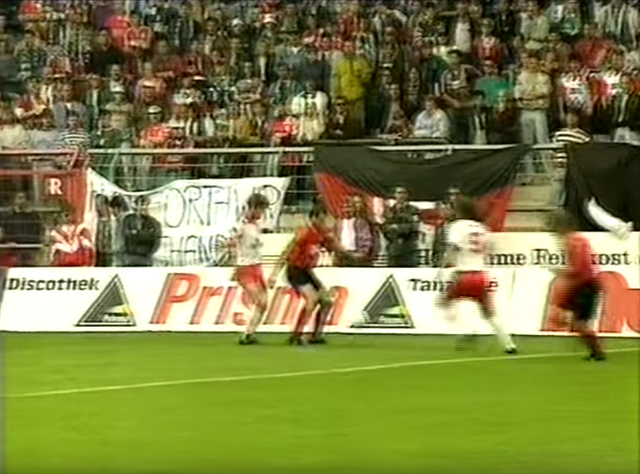 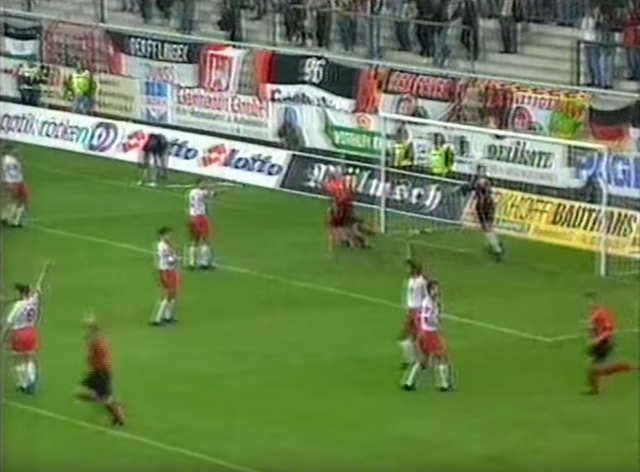 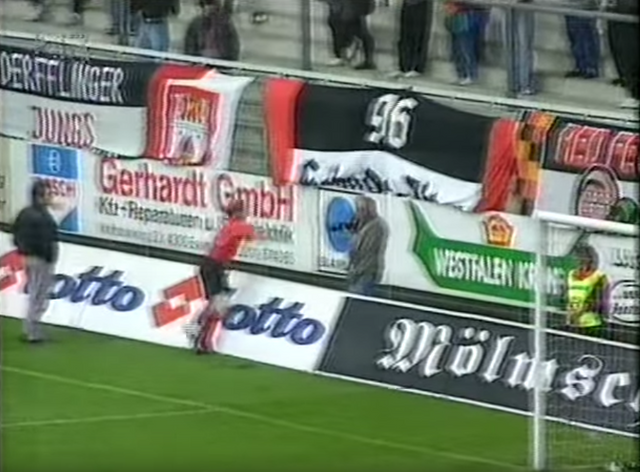 Some Rot-Weiss flags can be seen at the other end, although more are along the side where the supporters are by default: 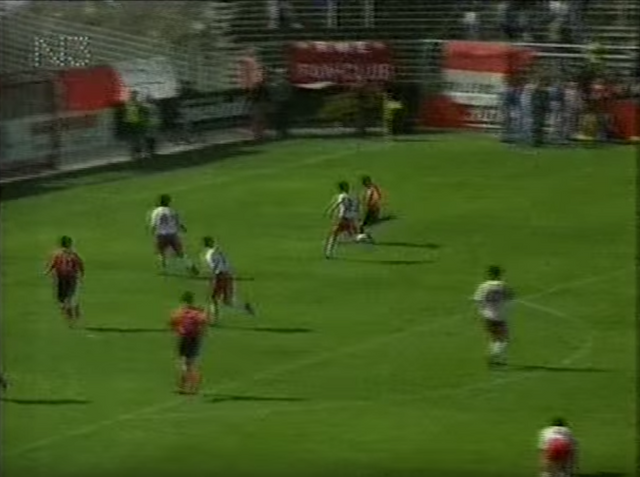 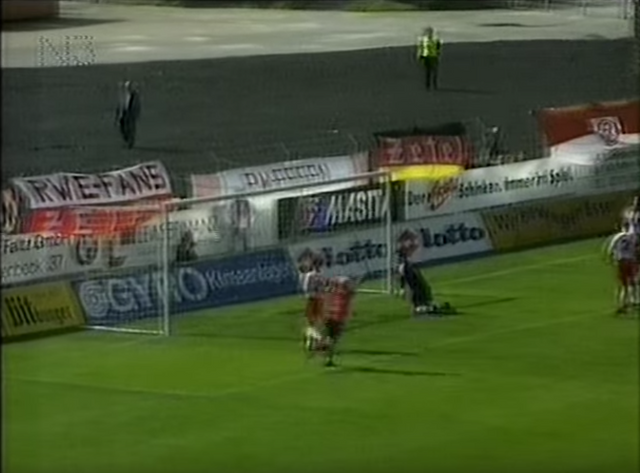 In the first half, the visitors score to keep one foot in the division:

The ambitious celebration is not so graceful, but nobody minds:

The real celebrations begin in the stands:

In the second-half comes a second goal and Hannover have done it, they’re staying up. More pyro and celebrations from the bench as the final-whistle is blown and survival is confirmed: 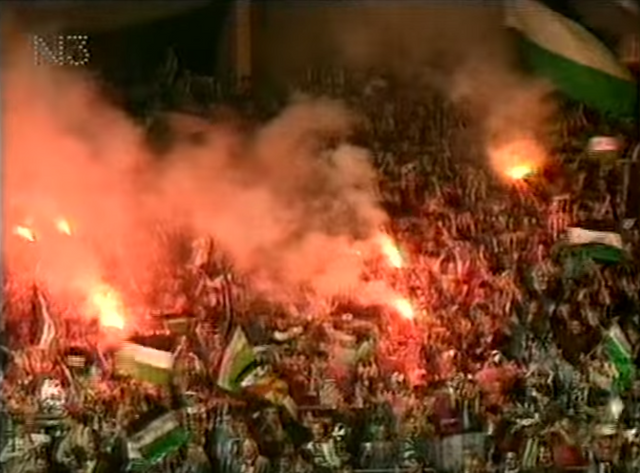 It’s momentarily all business from Schafstall again as he goes to shakes hands with his squads (more off those Essen flags and their main stand in the background), after all, if they had performed better during the season they wouldn’t have been in this position to begin with:

The hardcore in the away terrace are just relieved that they will be staying on a national-tier for another season, with some of course making it onto the pitch: 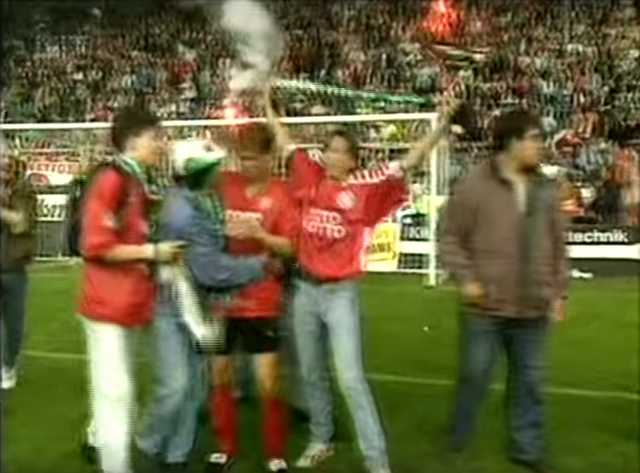 This is where things are about to get hairy, as the scene is described by the Hannover fan we linked to earlier (translated through Google) who was there on the day:

Shortly before the end of the game people gathered at the exit, Hannover had won so the dance in Essen city center could start, until suddenly someone shouted “The Ordners (stewards) opened the gates and the Essenes are all on the pitch!”

As we have seen, some have already made their way over the fence with stewards making a valiant attempt to stop one or two:

Soon however, as our reporter states, hordes of Hannover come rushing back from the exits and pour through the open gates onto the playing surface: 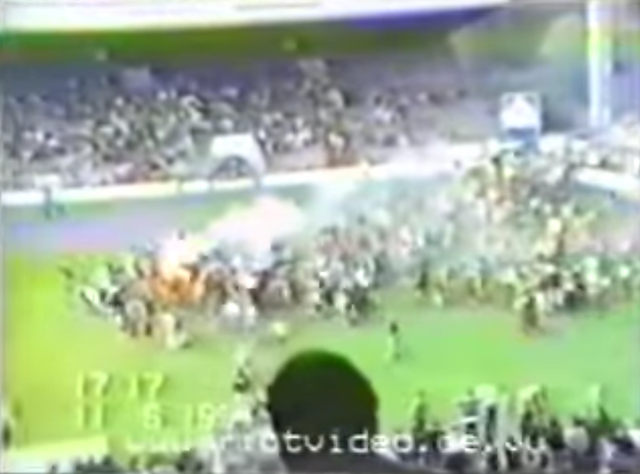 There is now nothing in between the two sides’ firms:

For the next several minutes the grass becomes a chaotic battlefield…:

…until a definitive moment when many Rot-Weiss need to retreat:

There is still scattered fighting all over the place though:

As there is more running and fighting at one of the side-gates, finally some police horses are on the scene, but clearly the authorities were completely under-prepared for this situation: 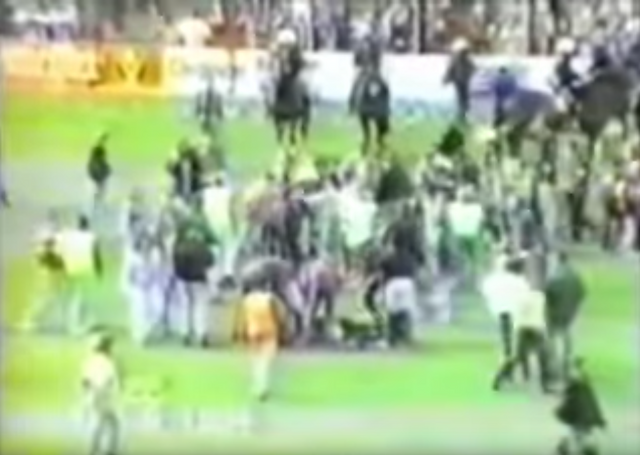 With the main action over most Hannover head back to their end, now satisfied with two results on the pitch today…:

The riot squads’ appearance is too late for the victims of the violence, with this one Rot-Weiss supporter an unfortunate casualty:

As our reporter states again:

Still, a generally good afternoon to be a Hannover fan: