POTP Cup of Nations Where Football Isn’t The Most Popular Sport #6: Semi-Finals

With just four games to go we’re finally drawing near the end of the POTP Cup o’ Nations, although one of those is just a 3rd place place off. But two exciting semi-finals await to see who will compete for the title of “best non-footballing football country in the world”. Click here to check out the whole tournament so far.

Before getting to our games of Japan vs Australia and Trinidad & Tobago vs Venezuela, let’s check back to see how we got to here during the knock-out phase: 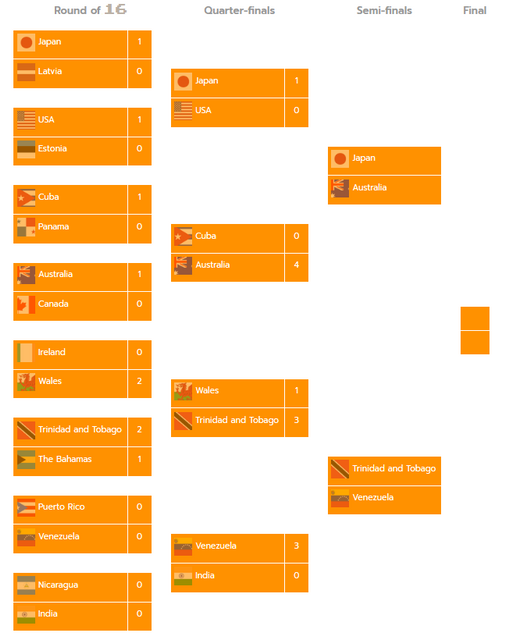 Japan had only gotten through the last two rounds by a single goal each time, while Australia had romped past Cuba by four in the quarters. Still, on paper Japan were clear favourites: 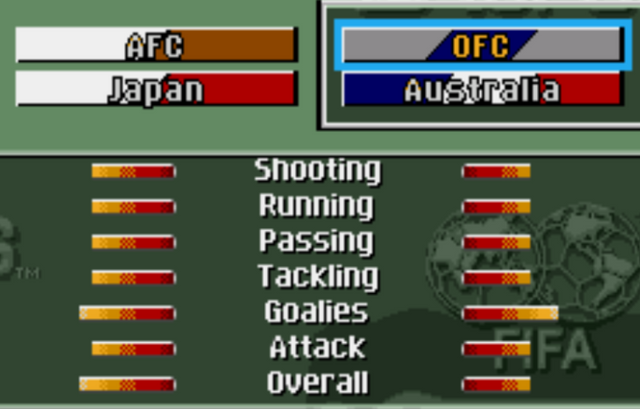 Thankfully, two proper, traditional kits were on show for the occasion: 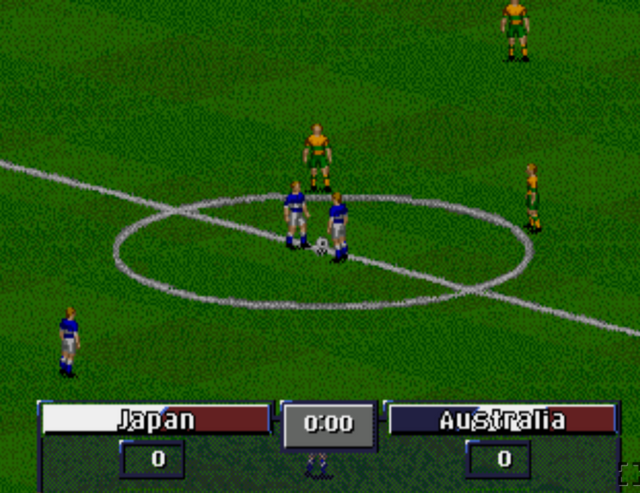 Nearly immediately Australia’s talisman Trajanovski shockingly marauds forward and strikes one past the keeper from the D of the box for his 10th of the campaign, making him top-scorer overall: 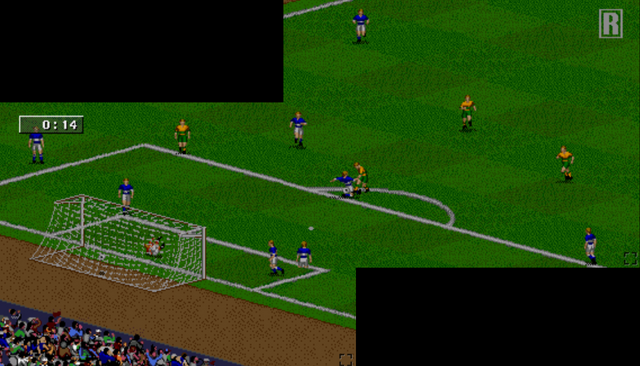 A beautiful goal and it’s 0-1 to the Aussies. But it goes from bad to worse for Japan when Trajanvoski shows his uglier side, taking Honda out of the game with a nasty tackle and earning a yellow card:

Interestingly, this moment actually seems to turn the game. The Japanese had the ball in the net soon after, but is was ruled out for off-side: 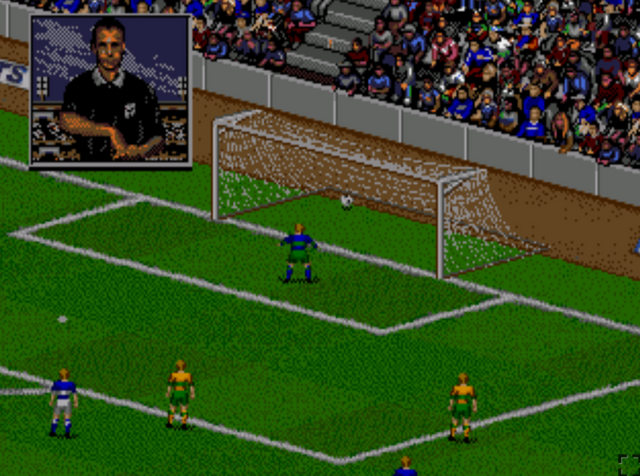 Japan’s own lead striker and captain, Kitazawa, seemed particularly fired-up and put that energy to good use, imitating Trajanovski’s effort earlier with a thunderbolt to make it 1-1: 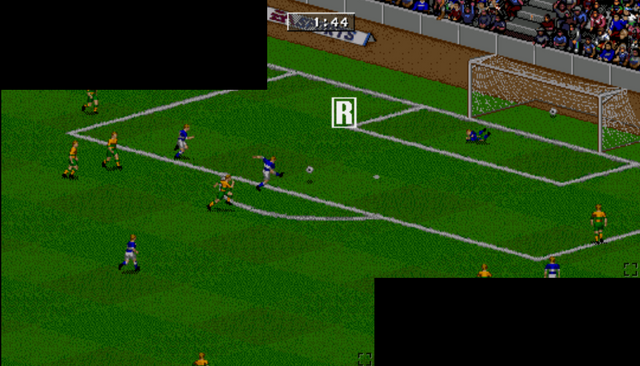 Australian heads dropped, with Trajanovski particularly miffed. With all the momentum against them, expletives even may have been used just before the break when Kitazawa latched onto a rebound to make it 2-1 Japan: 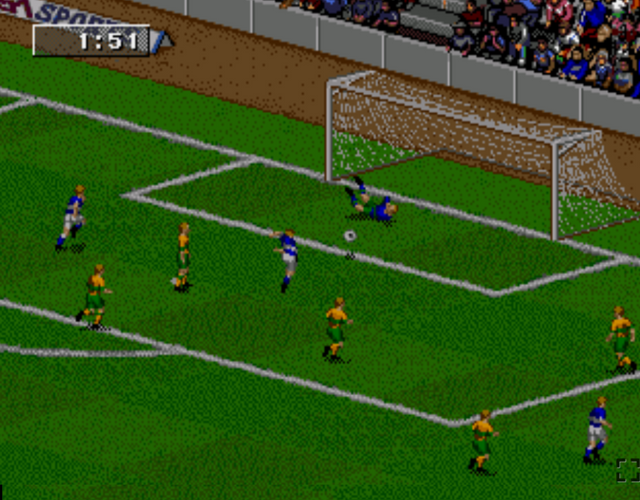 For the second-half, the East Asian side looked to sit on their lead, although the early opportunities also fell to them. Australia’s best chance to salvage something came late on, but was sent straight at the ‘keeper’s chest: 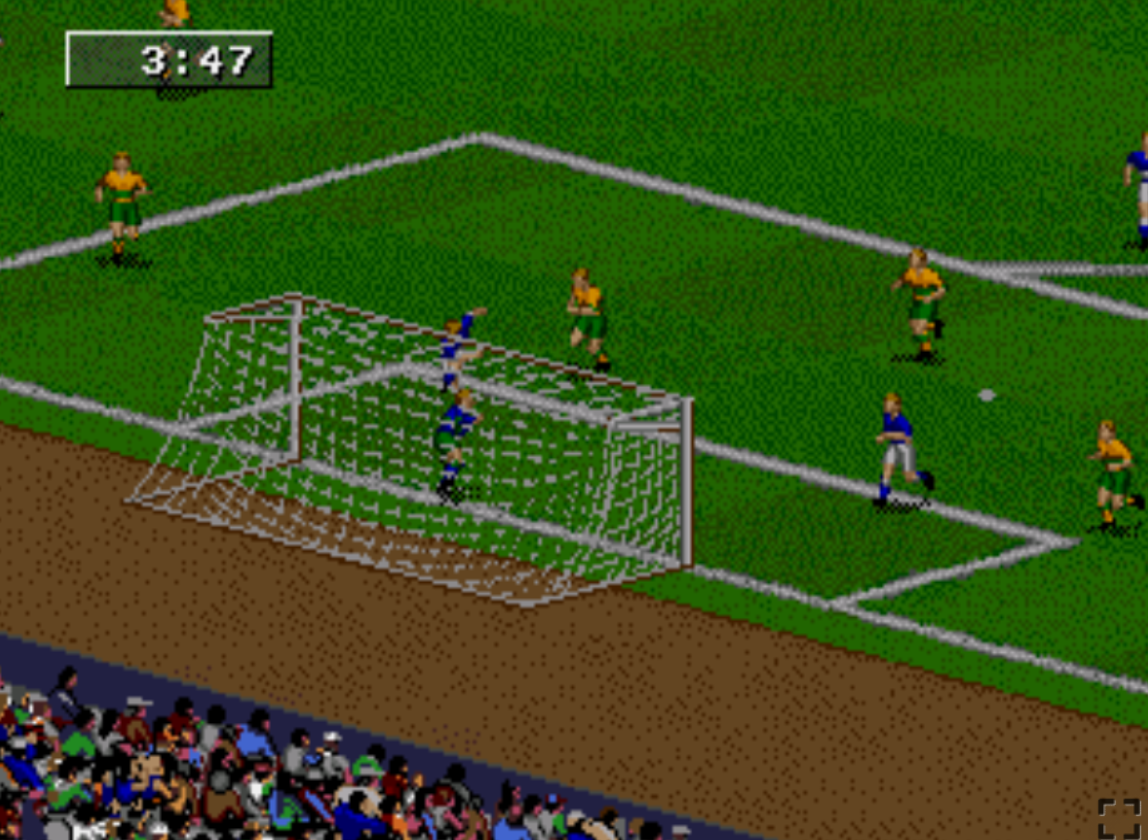 Man of the match Kitazawa also received a yellow card for a foul on Trajanovski, one last piece of revenge for injuring his friend earlier. But soon the final-whistle went and Japan could celebrate, they were going to the final: 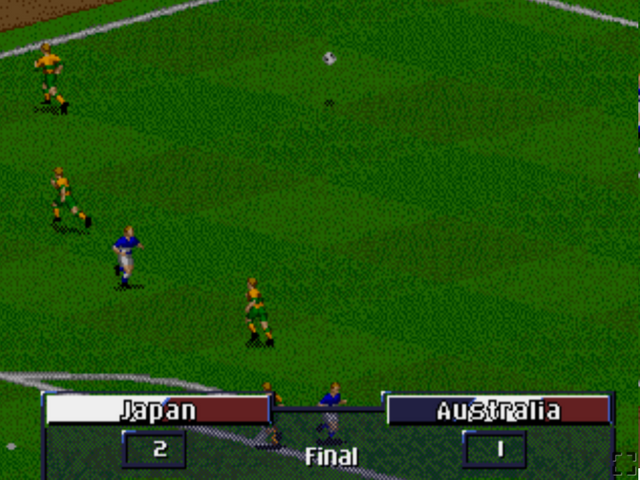 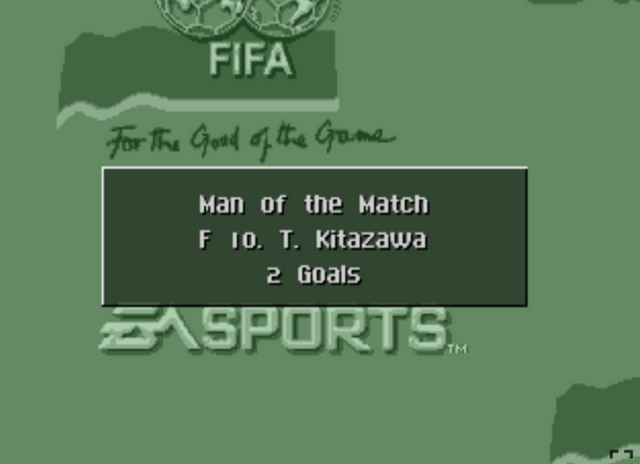 If Japan against Australia was an all “Australasian” affair, the next semi was a boni fide derby with only 765km at the shortest point between the islands and the South American mainland. Trinidad & Tobago had won 5 out of 5 at this stage, the only side besides Japan to have done so, while Venezuela suffered a loss in the group stage and needed penalties to get past Puerto Rico in the Round of 16, however the pundits predicted Venezuelan domination here: 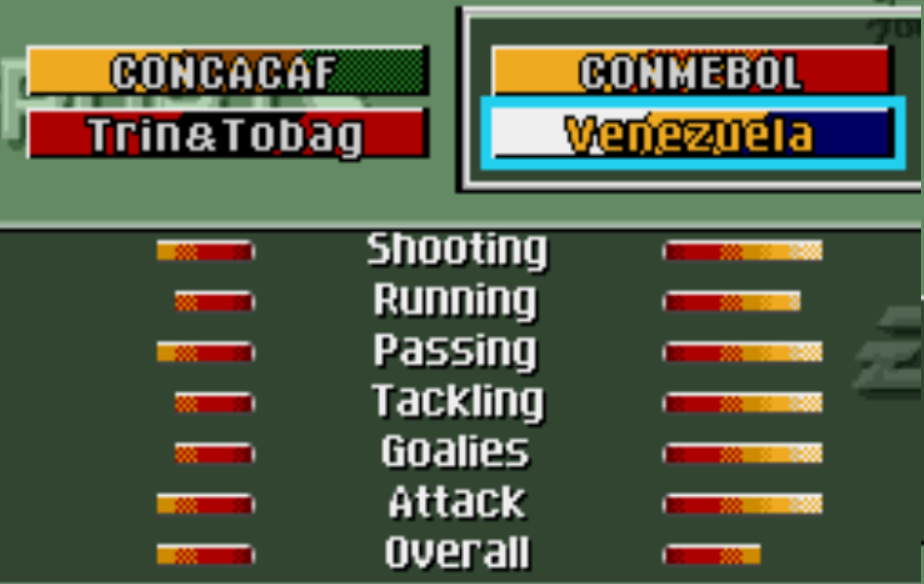 At this point we must point out again that FIFA 98 on the Sega Genesis only features generic white, blonde, Aryans for players no matter what team. Quite unfortunate especially considering this the special “Road to WORLD Cup” aspect of this edition: 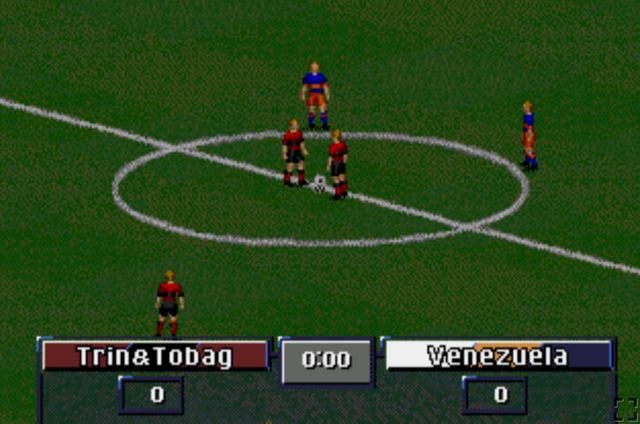 The first-half was cagey with not many chances, but just before the break Garcia somehow squeezes it in from a tight angle to put Venezuela 1-0 up: 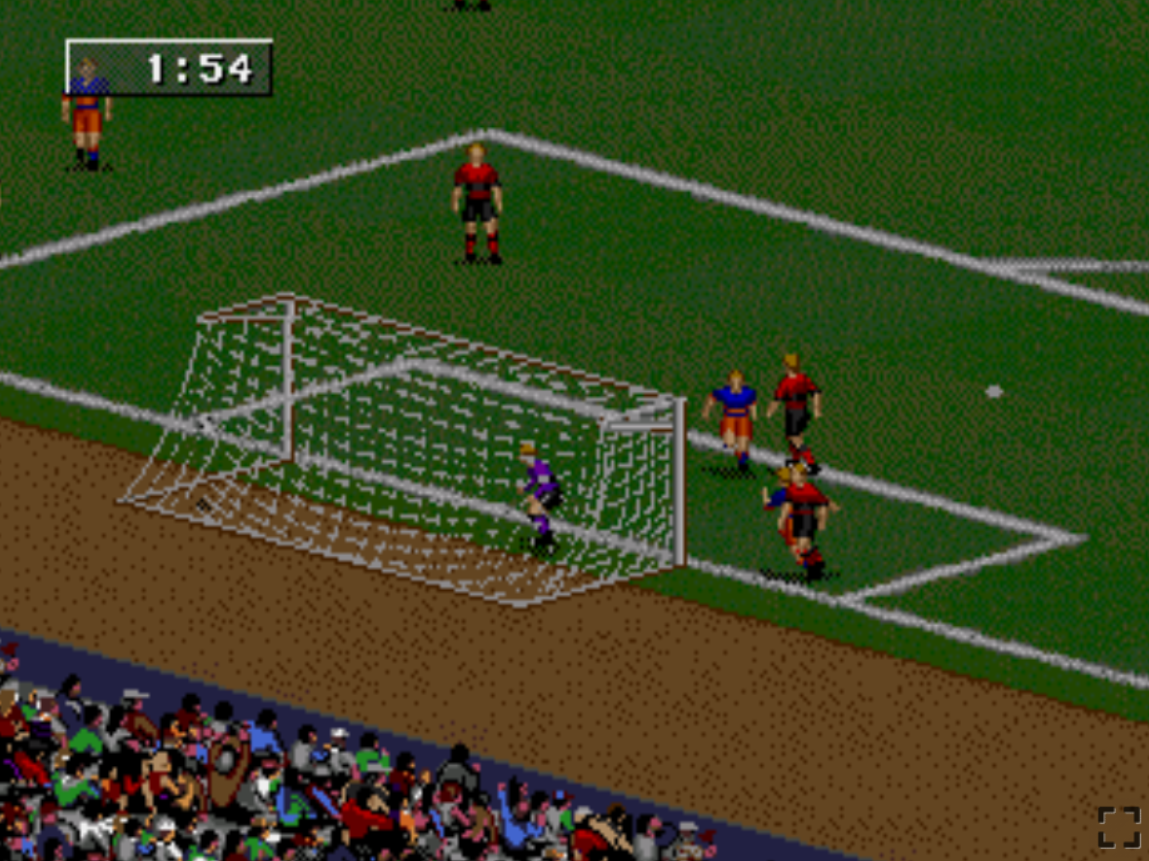 It seemed like a hammer-blow for T&T, but mid-way through the second-half there’s suddenly a moment of brilliance from Dwarkia with this audacious chip to equalise. 1-1, game on!: 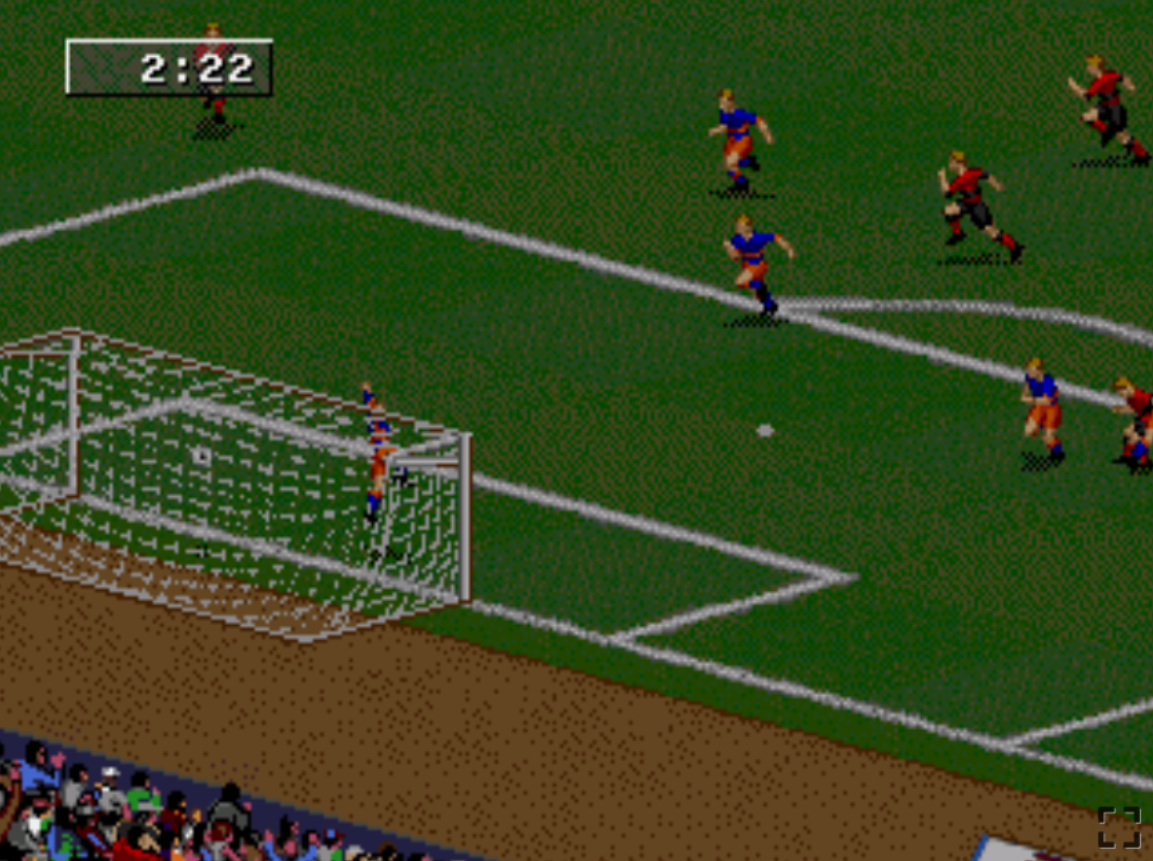 Crowd shots show that many here were supporting the underdog islanders: 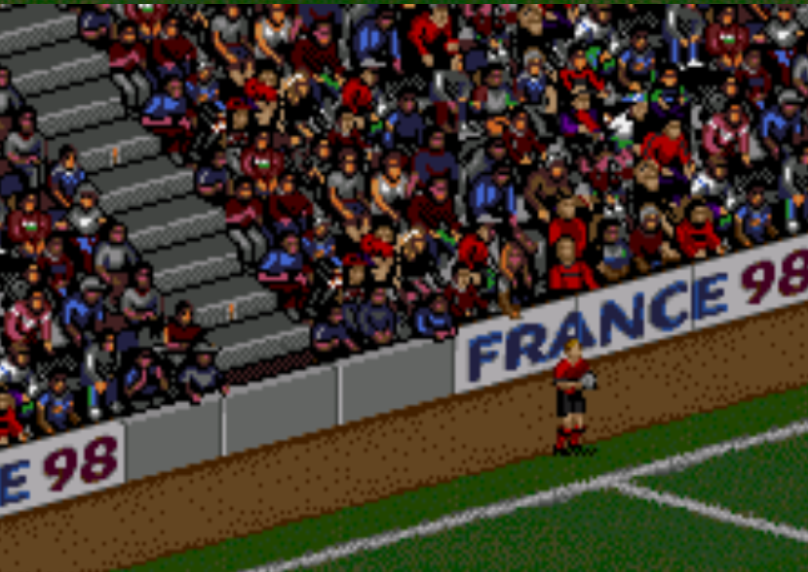 The rest of the half passed off like how the game started, with both sides nervous about conceding again. There was no breaking the deadlock, so it’s extra-time in the semi: 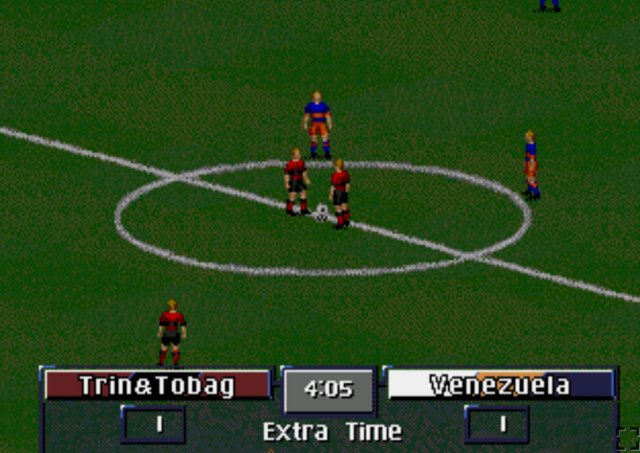 Golden goal rules were in effect and it didn’t take long for gold to be struck, as Savarse rounded some tired defenders to score his 5th of the competition and most important so far to send Venezuela through: 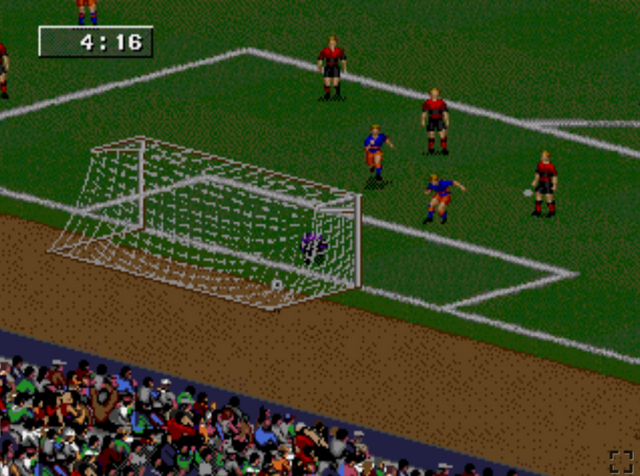 Trinidad & Tobago had put in a herculean effort, but the dream was however. They wouldn’t be going home just yet however, as there was the matter of the 3rd place playoff to take care of first: 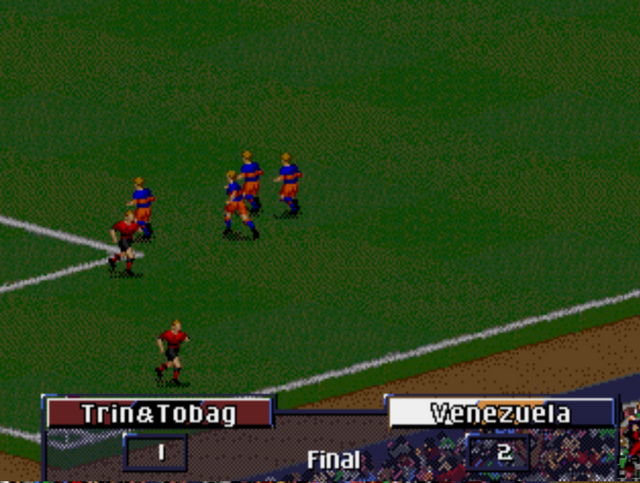 And Savarese rightly received the man of the match award for his role in helping Venezuela side reach this prestigious final: 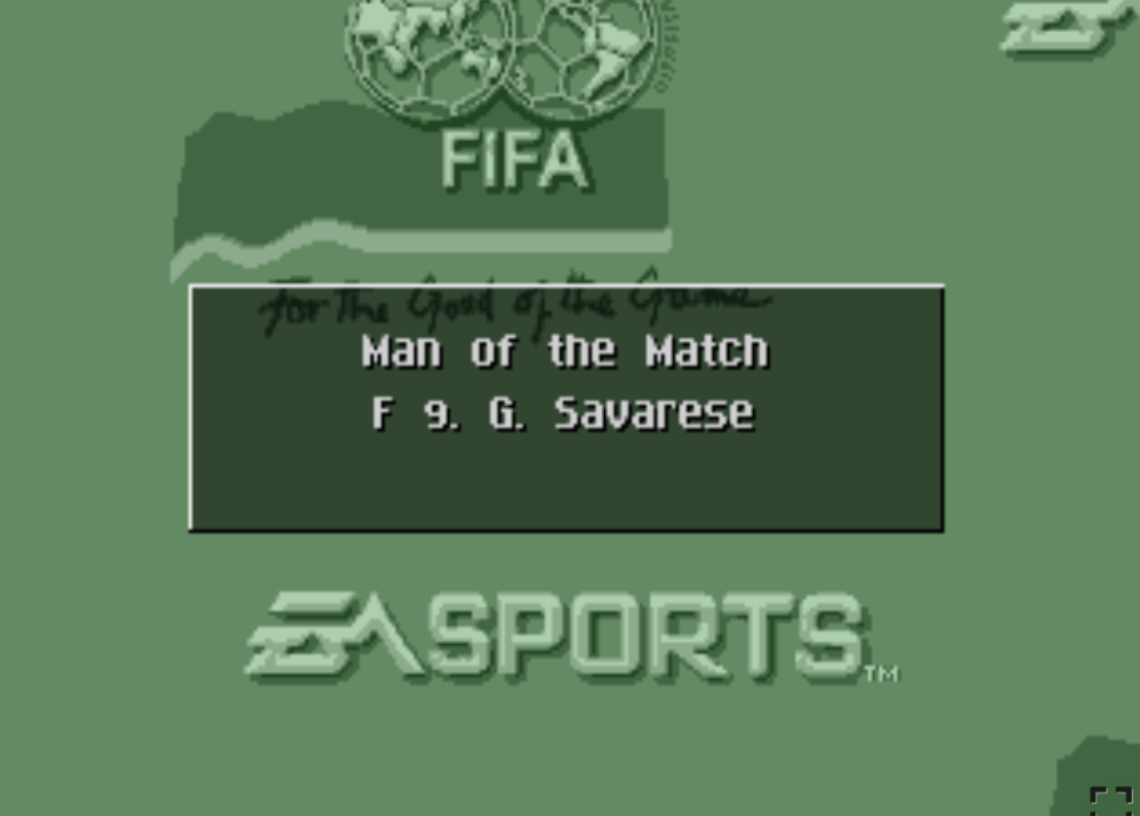 There you have it, we’re down to the finalists, with an interesting Asia vs South American clash of two baseball loving countries to come that will doubtlessly deliver both colour and class. Next time we will look back on the tournament on a whole, pick our team of the Cup, and find out who’s to be crowned the first (and most likely last) champions: 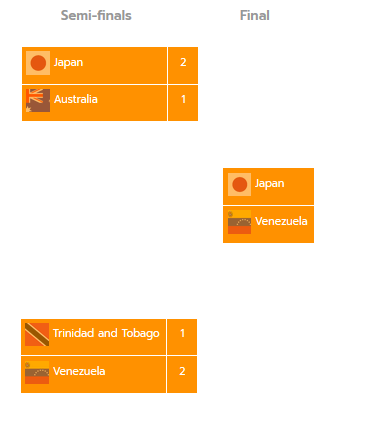