Having last featured a team from Africa in Champaign Kit Campaigns #7 – Zaire 1974, we now head back to the Motherland for a special double installment from the African Cup of Nations 1992, both involving hosts Senegal. Click here for all in the Pyro On The Pitch series to date. Before 1992, Senegal were yet to qualify for a World Cup (having been denied entry to 1990 the qualifiers), host an African Nations Cup, or win an African Nations Cup. After 1992, one of these would no longer be true, as the latter competition came to the country in January. Crystal Palace’s John Salako also headed over to present a review of the tournament for the English Channel 4, which included this great intro:

Before Senegal were set to take to the field for their first game on opening night, Cameroon faced Morocco in the same stadium to kick-off the Cup. In the stands the green, yellow and red of the home nation could already be seen assembled: 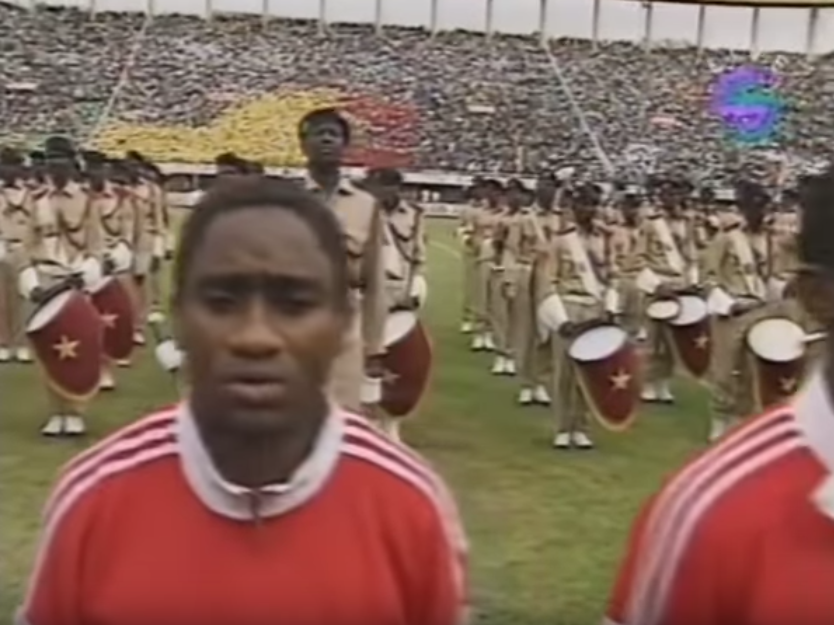 There’s a full house at Stade de l’Amitié, “Friendship Stadium”, official capacity of 60,000 but apparently with an extra fifteen crammed in, for the first day of the 1992 African Cup of Nations: The hosts of Senegal, guided by Frenchman Claude Le Roy….: 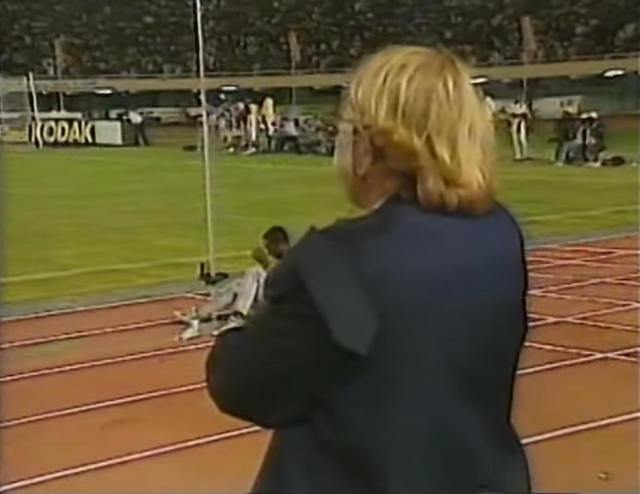 …are hopeful of building on their 4th placed finish in Algeria four years earlier by making it to a final for the first time. As we have seen on the terraces, a suitably colourful display of patriotic encouragement awaits the team as an ambitious t-shirt flag display has been arranged…: 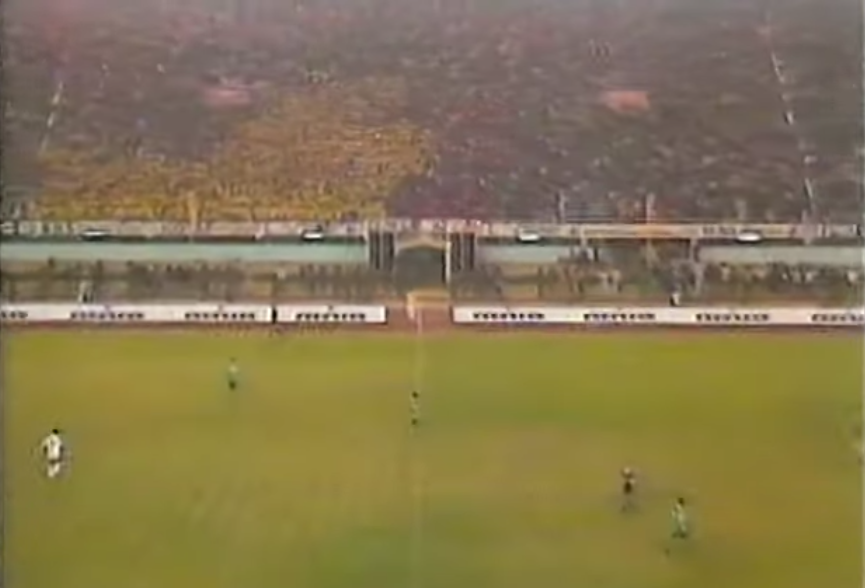 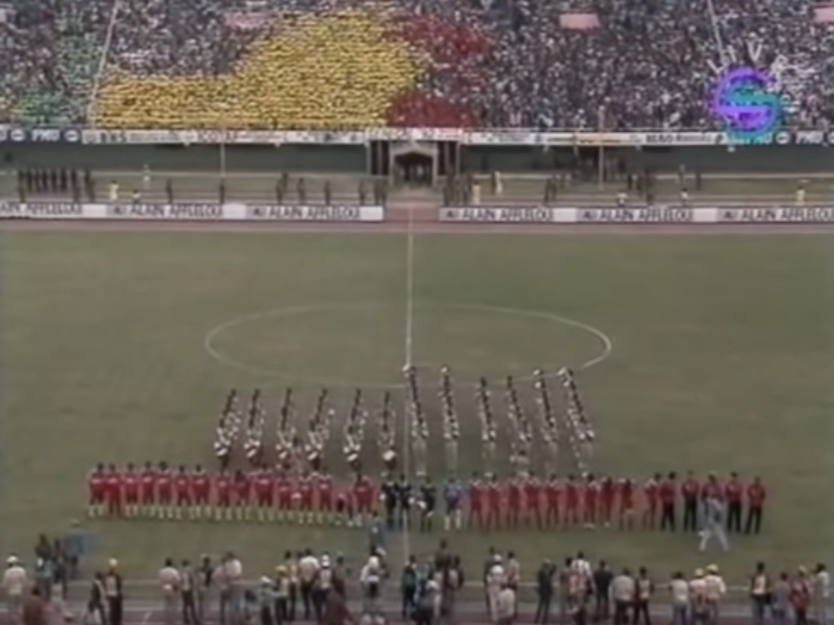 We’re not sure if is meant to be diagnoal (juding from the left no, juding frm the right yes), but something has gone slightly wrong somewhere. However, the first-time effort is much appreciated: 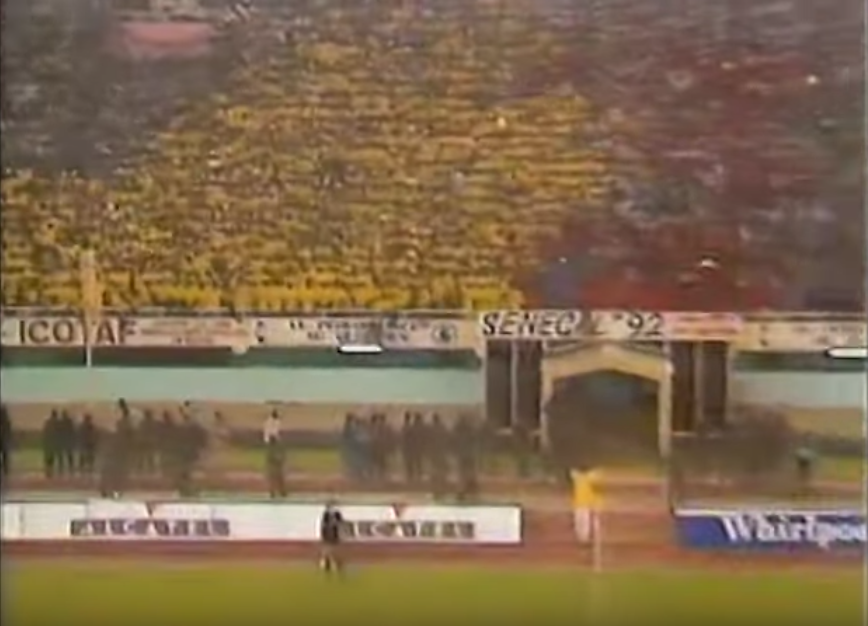 The visitors, meanwhile, had won the competition for the first time in 1980, also on home soil, and were runners-up in three of the previous four editions. Their Dutch manager, Clemens Westerhof, was now looking to take the side one step further with qualification for the 94 World Cup, as well as continental success. In the stands are a small but colourful and loud pocket of away support, seen here in the background during the earlier match: 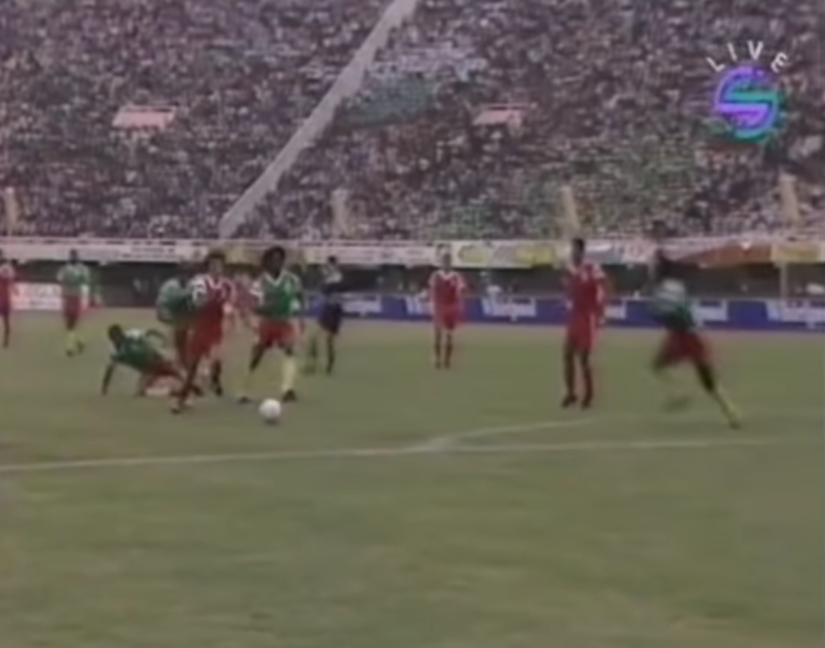 After only 13 minutes, Nigeria’s KSC Lokeren striker Samson Siasia ruins the hosts’ party by putting the ball in the net, with some great “Africa No1” hoardings in the background: The Super Eagles celebrate in their interesting kit, the template of the shirt actually being a pumped-up version of the Yugoslavia 1990 design,…:

…while the green and white away section pops-off: 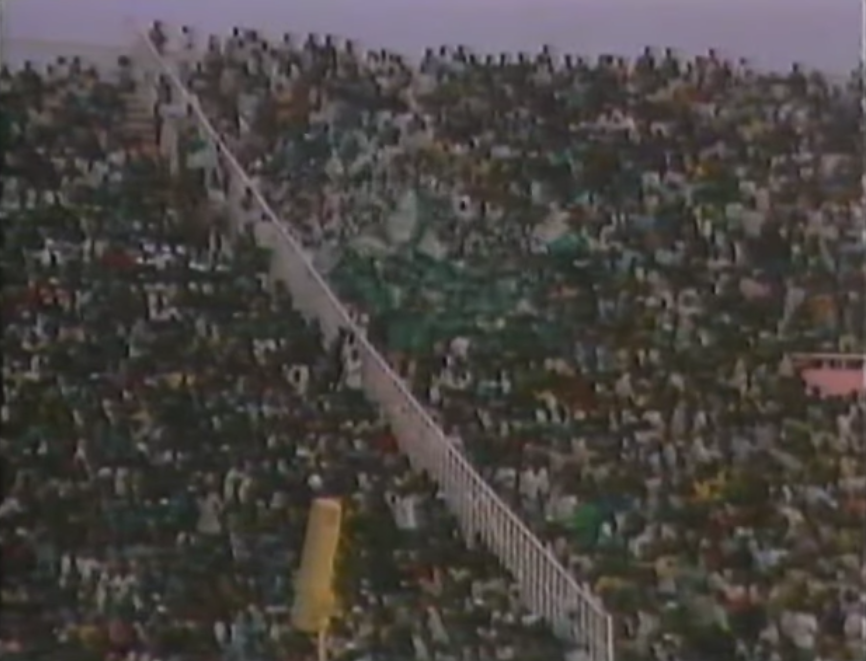 Senegalese dignitaries, who may or may not be interested in football in the first place, watch on unimpressed: 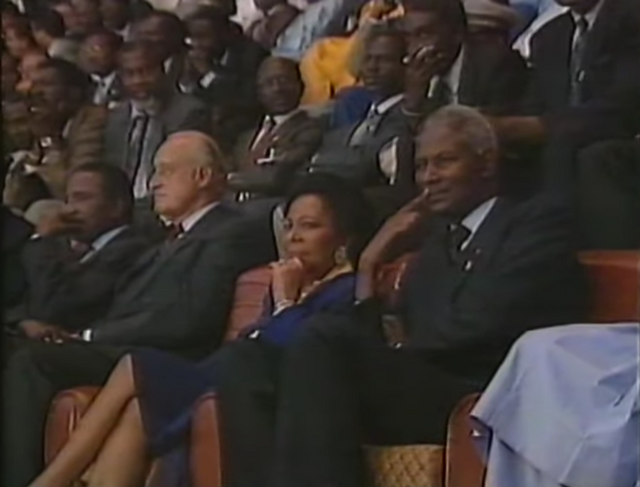 But thankfully, the home fans do get something to celebrate too as another Belgian-based player, S.C. Eendracht Aalst’s Jules Bocandé, captain, gets Senegal’s equaliser on the 36th minute:

It’s the turn of Les Lions de la Téranga, as the team are nicknamed, and the majority of those in attendances to go crazy: 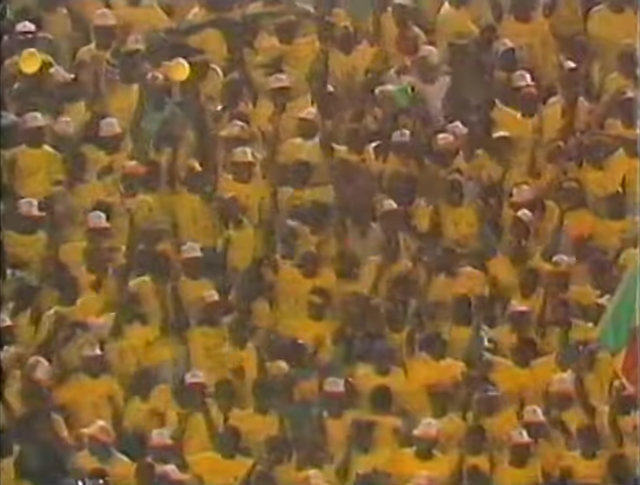 Amazingly (just because you wouldn’t really associate pyro with sub-Saharan African supporter culture), this includes the release of fireworks from the main stand on the camera side:

The strikes of flame arching towards the grass are good enough for us, it’s a classic pyro on the pitch moment: 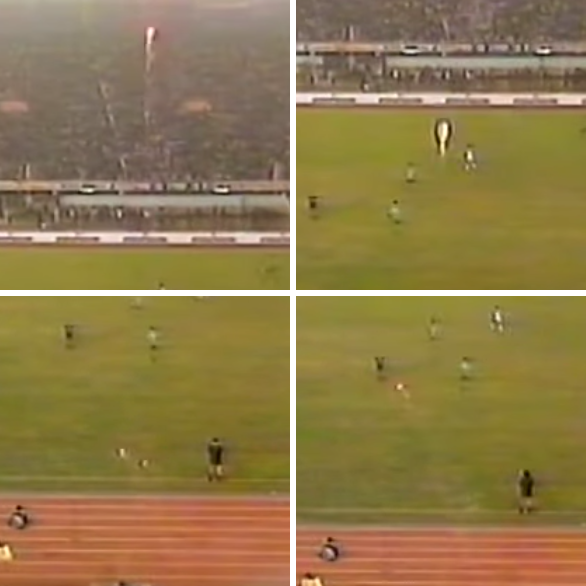 The replay of the goal also gives a nice angle of the vivid colours in the crowd: It’s not to be hosts day though, as another Nigerian goal comes on the 89th and again there are Belgian connections. Stephen Keshi – formerly of Lokeren and Anderlecht, currently of Strasbourg in France, but soon destined for R.W.D. Molenbeek – is the man to to grab the winner, displaying both great joy in celebration and the front of that great shirt (being worn in long-sleeves, rather than than Senegal’s short-sleeves for their more basic Adidas template seen above): 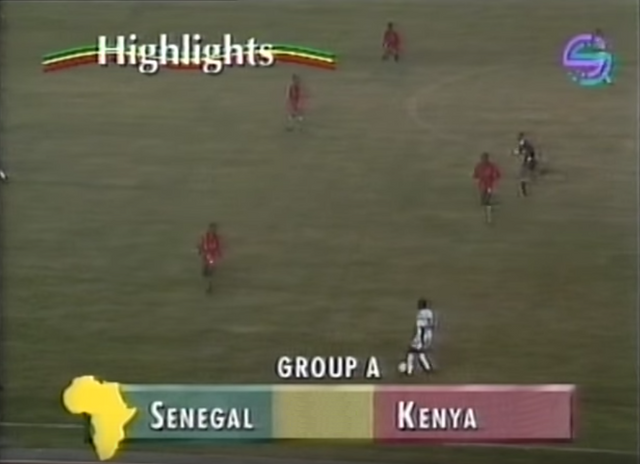 Four days later and Senegal need a result against Kenya in order to join Nigeria in the next phase, who had beaten both opponents 2-1. That means a draw here would place the two teams in a deadheat, which nobody wants to have to deal with. In the stadium, the t-shirt display is back and looking better: 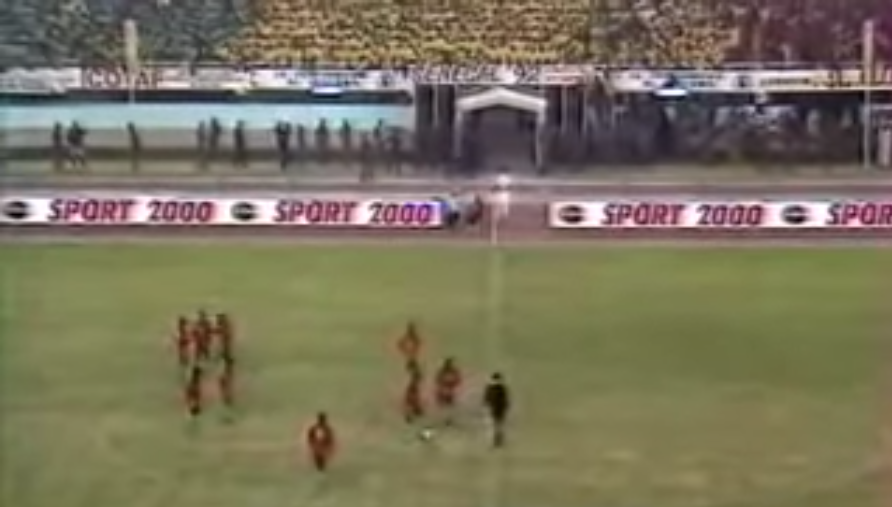 This time seemingly intentionally diagonal? We’re still not sure, but it’s cool anyway: 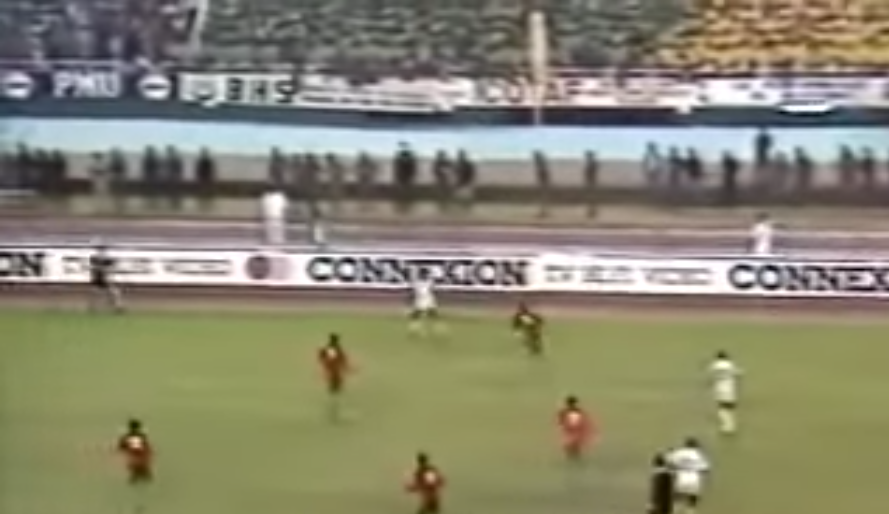 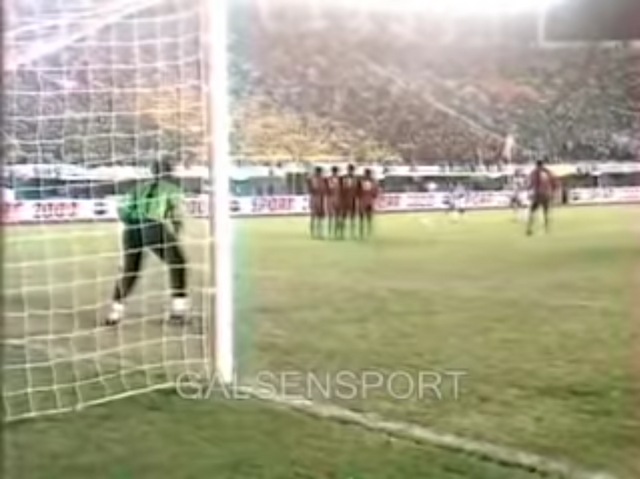 Having looked at Nigeria’s Yugoslav-esque look in the earlier match, it’s worth noting Kenya’s own World Cup 90 related jerseys. Manufactured by “Orbit Sports“, the shirts draw heavily from the famous West Germany/Germany shirts of the last several years (as several smaller brands did):

From a free-kick that follows the above on 69 minutes, Bocandé scores again to increase Senegal’s lead to 2-0, after Souleyman Sané (father of Leroy) had put the home side 1-0 up just after half-time:

With progression to the quarter-finals now all but assured, cue more great scenes from the Friendship Stadium faithful…: 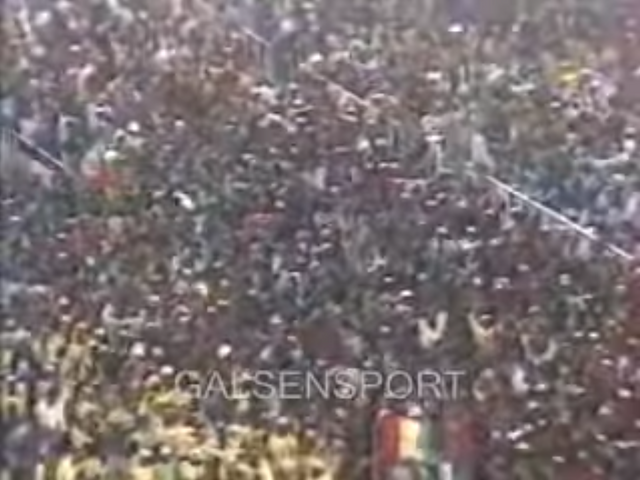 …and from the dignitaries box, at last some unbounded joy: But when it does we get an even more curious sight, as smoke billows from the centre of the pitch:

Evidentially more fireworks have gone off, or possibly even a flare of some sort. Had the earlier repeater from the Nigeria game not exactly counted as pyro on the pitch, this certainly does: 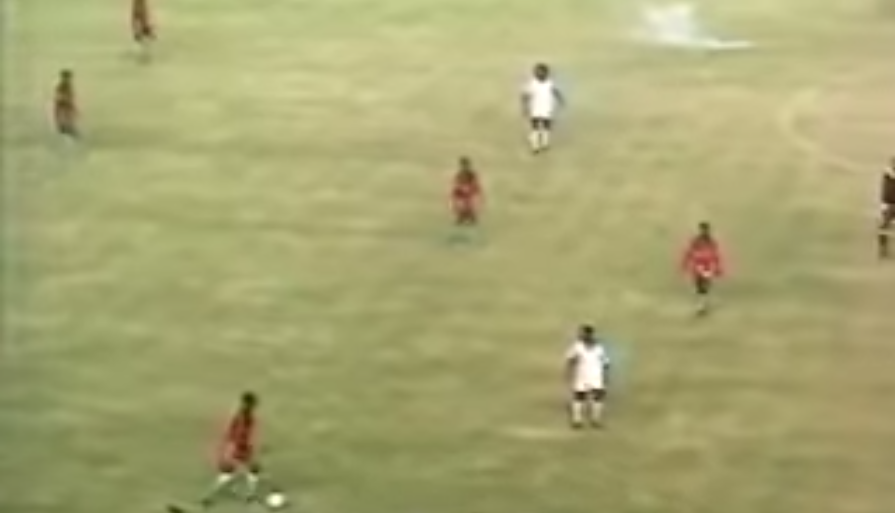 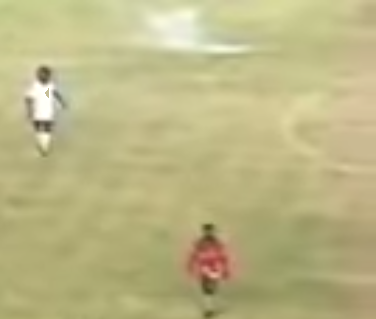 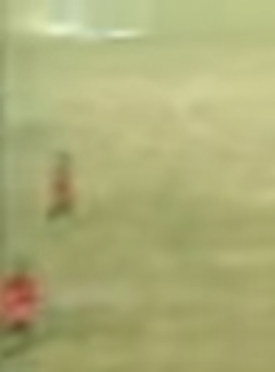 Senegal bag another one before the end through Victor Diagne to make sure of things, securing second place in the group and progression to the next stage: 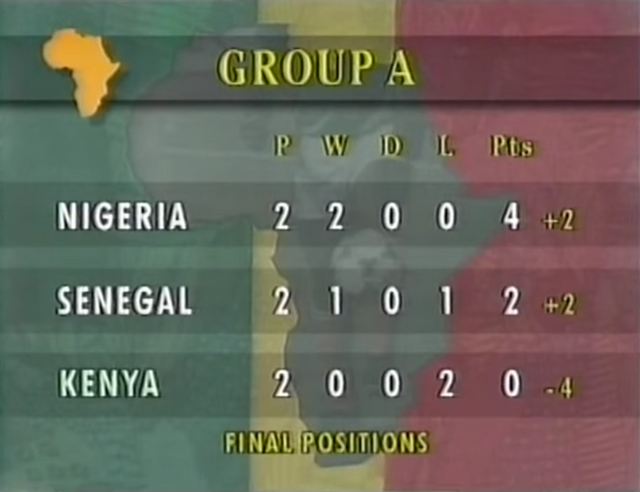 The flag display made it to one more match, as Senegal would be beaten by Cameroon in the quarter-final. Well, two, as the earlier game of Nigeria vs Zaire that day was again in the same venue beforehand, with a mostly Senegalese contingent watching on: 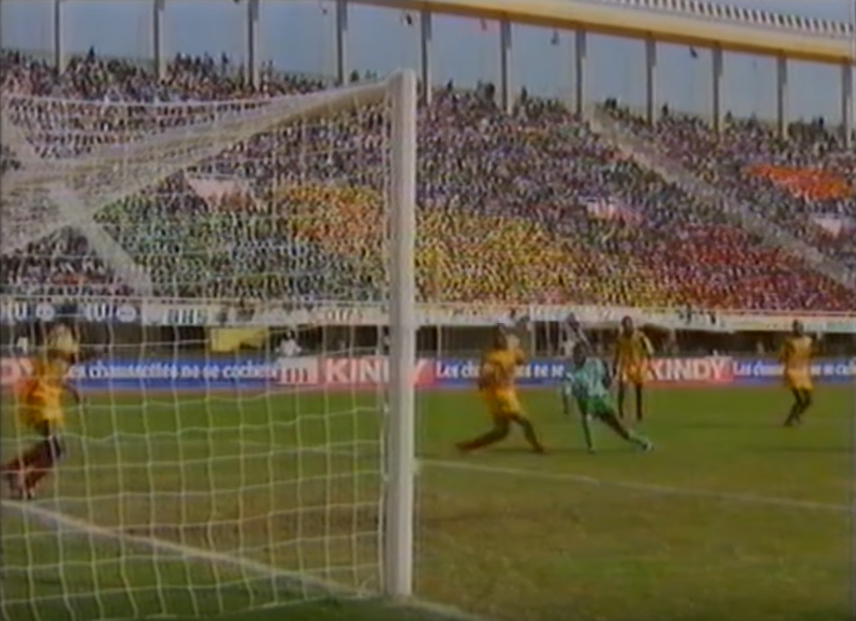 The execution, now seen here during the Cameroon match, was similar to that of the previous occasion: 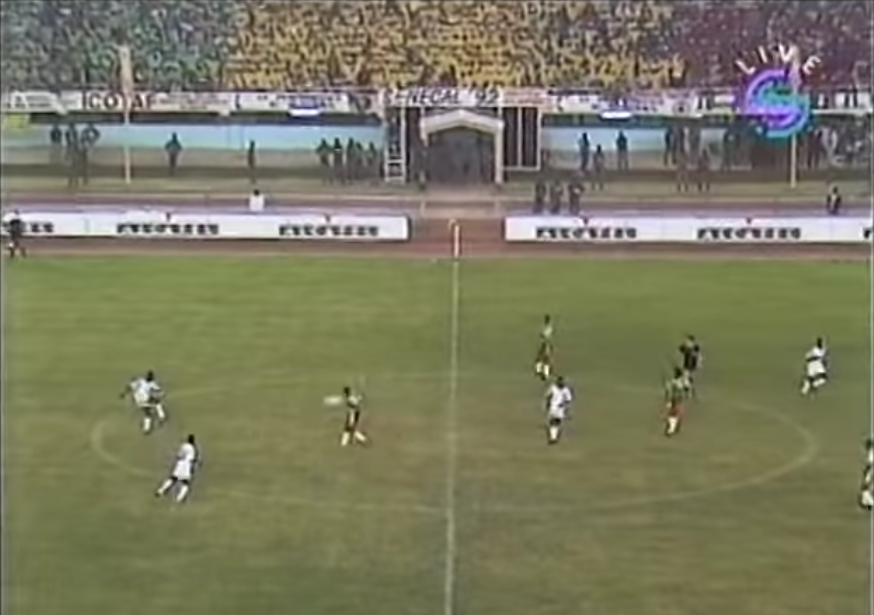 It wasn’t to be enough to spur the home team on though, as yet another 89th minute opposition winner, through Ernest Ebongué, broke the hosts’ hearts. Cameroon and Nigeria would go to the semi-finals, only meeting each other via the 3rd place play-off after defeats at the hands of Ivory Coast and Ghana, with the latter picking up the championships thanks to an 11-10 penalty shoot-out win. But the Senegalese were the real stars, creating history with not just the first, but also second episode of African pyro on the pitch on record.