Click here for all in this series where usually we take a close look at vintage shirts in the POTP collection, but this time there’s a slightly different source. 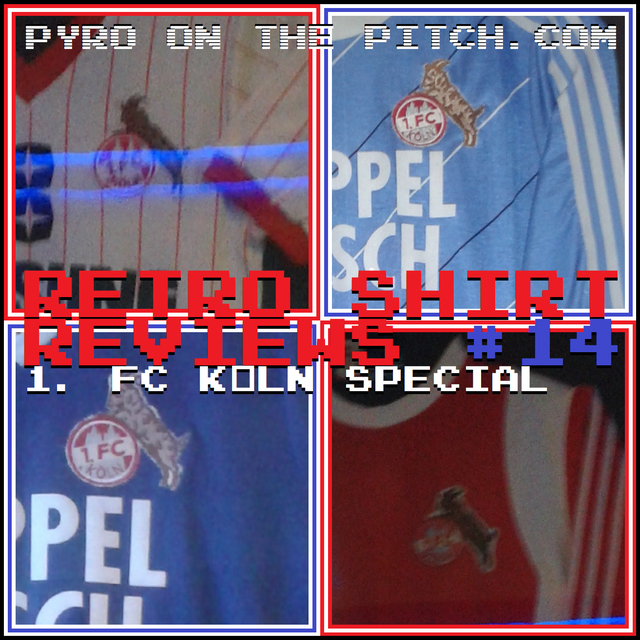 In early 2015, POTP and some POTP associates visited the fine German city of Köln/Cologne (we prefer the former version). This wasn’t a football trip (an Underworld gig and a classic German rave were involved) and after a quick bit of site-seeing upon arrival…: 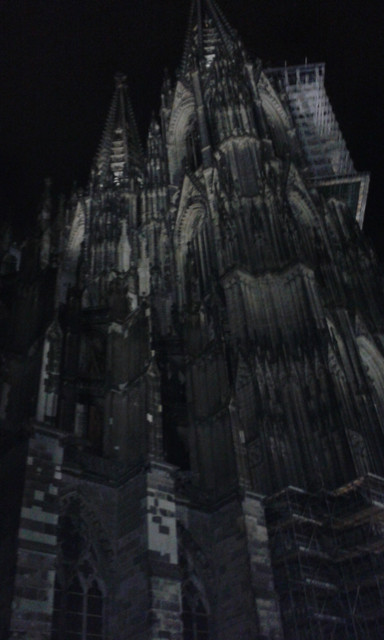 …we hit the local bar scene. It must have been late on a weekday because the place was mostly dead. However we did stumble across one establishment which presented the double-win of wrestling on the TVs and classic, match-worn shirts from the larger of the two local sides: 1. FC Köln.

Given our love and appreciation for such things, we (POTP) set about documenting all the shirts on show. As it was late after several drinks already, and with a bad camera-phone in bad light, they’re not the best shots. But the soul is there.

Credit to the great 1. FC Köln Trikot Museum for info on several of the below.

In 1976 Köln introduced home, away and third kits specifically for their European campaign, showing that continental shirts are not a modern phenomenon. Speaking of modern, the Adidas template used was uber-futuristic for the time compared to the plainer domestic jerseys:
: 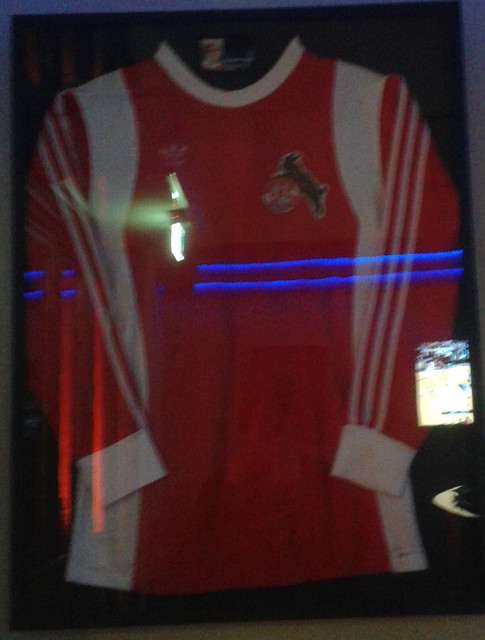 The same template was applied to blue/white for the Euro away strip and white/blue for another variation. You may remember this design, in v-neck form rather than the roundnecks here, from Retro Shirt Reviews #4 and our own beautiful 70s top: 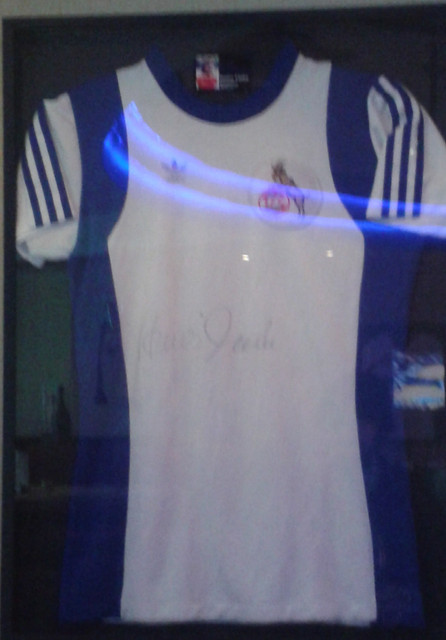 By the 80s Köln had switched to Adidas-owned Erima and caught-up with the evolving sponsorship movement in a pretty cool way, by taking on Japanese electronics company Pioneer – now most well-known for their turntables. Among many variations from these seasons, this beautiful, long-sleeved, v-neck, pinstriped affair was worn at some stage as a home option: 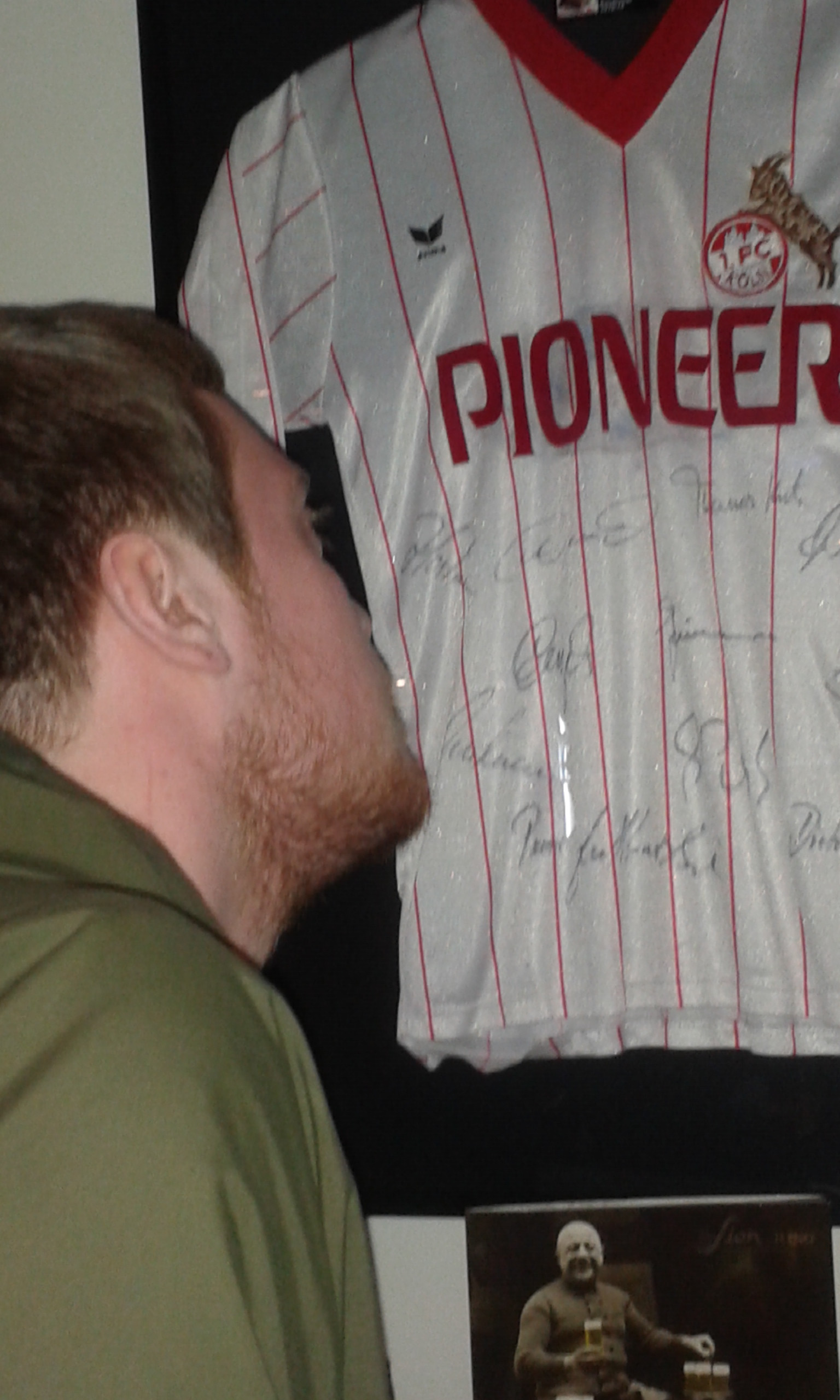 As you can see, this one was also signed by members of the squad:

Speaking of the players, we did mention that these were all match-worn shirts and each were actually accompanied by a card to say who wore it. Again, unfortunately we weren’t taking these pictures in the most professional of manners and so missed most of them.

Here though, above this 1982/83 return-to-Adidas away shirt (again among many, although Ermia kits seem to have continued to be worn every now and then) with new Doppel Dusch sponsor (they make shower gel and such, probably other things), we can definitely make out this image of Klaus Fischer – a West German international who played for 1. FC from 81 to 84: 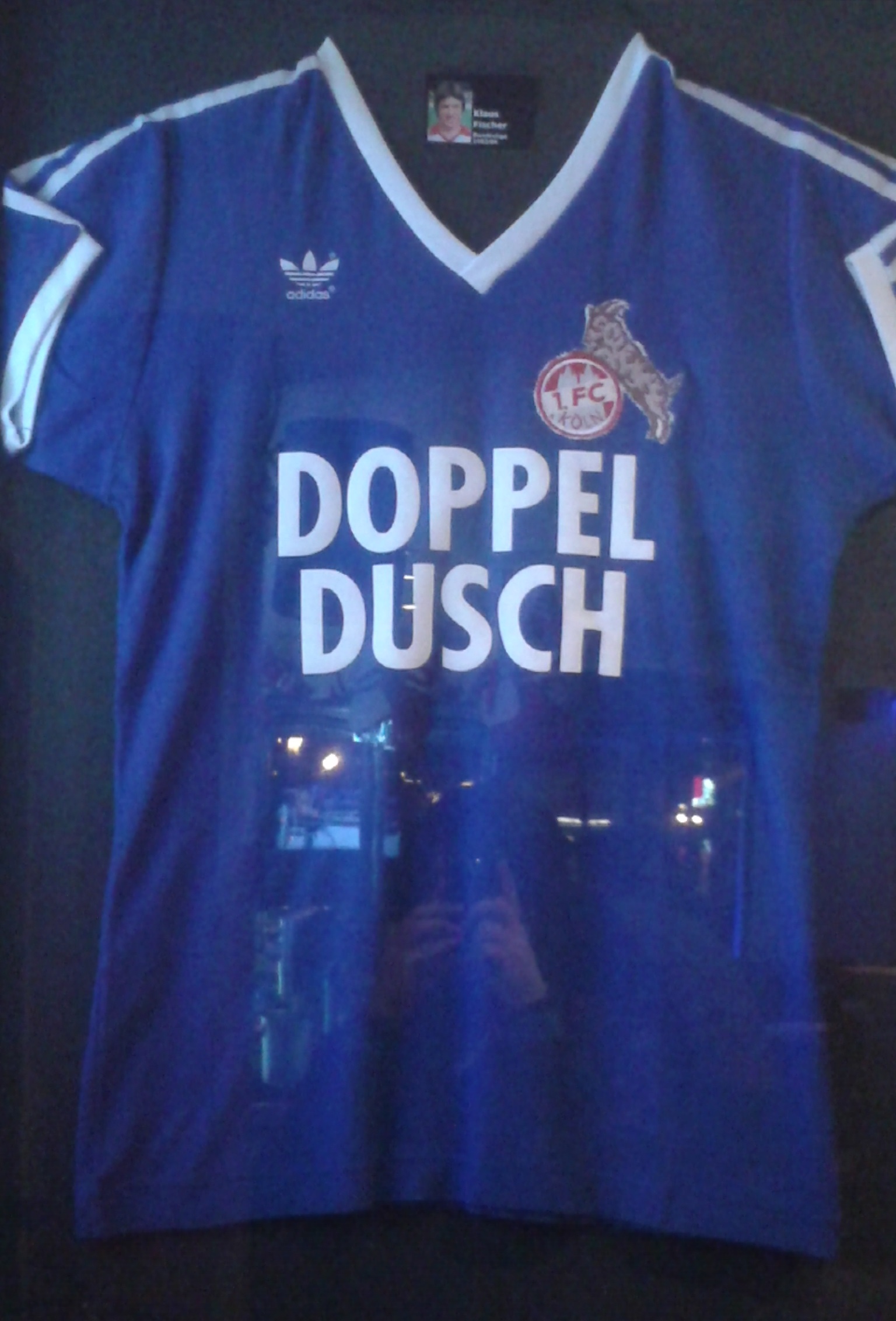 (Note wrestling on the TV in the reflection of the glass.)

During the Doppel Dusch years, several famous Adidas templates of the 80s were seen with the sponsor, including this: 1984’s “Chelsea”, another design previously looked at in Retro Shirt Reviews #13 with our similar Swiss model (the diagonal, alternating pinstripes were an inspired choice by whatever genius created it). Again we can make out that this lovely long-sleeved jersey was worn by another Kalus – striker Kalus Allofs who scored 88 times in 177 appearances for Die Geißböcke (The Billy Goats) between 81 and 87: 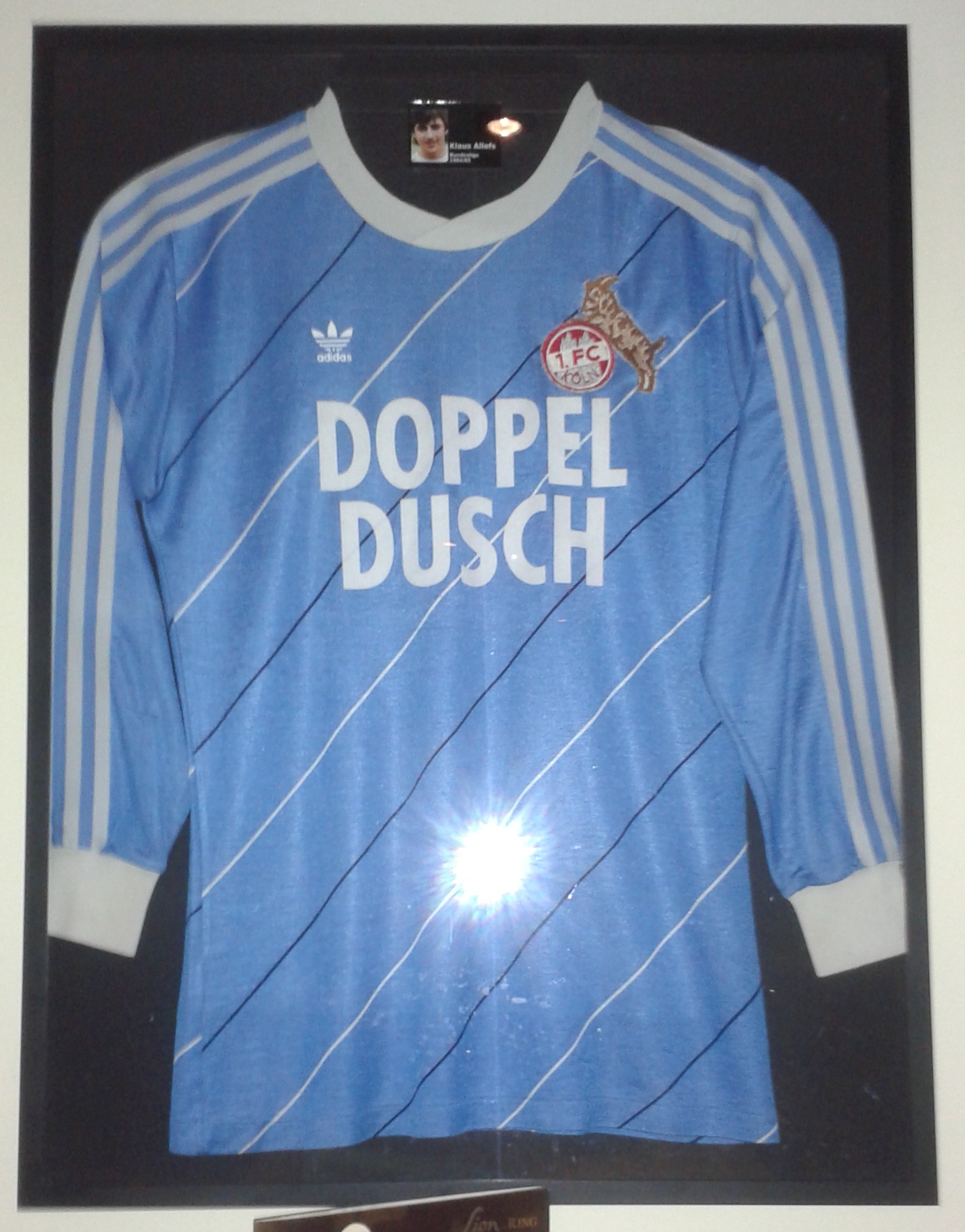 In 1985, 1. FC moved on to a new manufacturer and a new sponsor, in Puma and “Daimon” respectively. By 1988 the sponsor changed again to Samsung, which is around when this shirt must have been worn – a strikingly familiar one to the Erima top seen earlier: 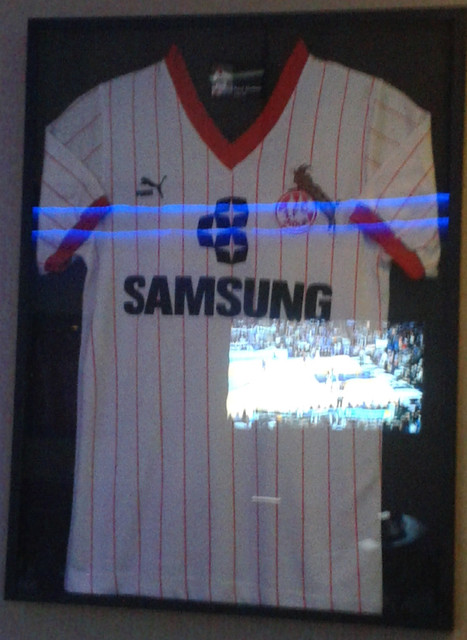 Our photos end there, and who knows if we drunkenly missed one. Of course we have no information on where the bar was or what it was called, but if anyone happens upon it then do let us know!

And as mentioned, during these years there were many, many other fascinating 1. FC Köln jerseys, many which can be seen here at 1. FC Köln Trikot Museum.