Click here for all in this series looking at interesting kit items, or here for the last episode in which we looked at the world of international ‘keepers wearing shirts that were not their own, update below. 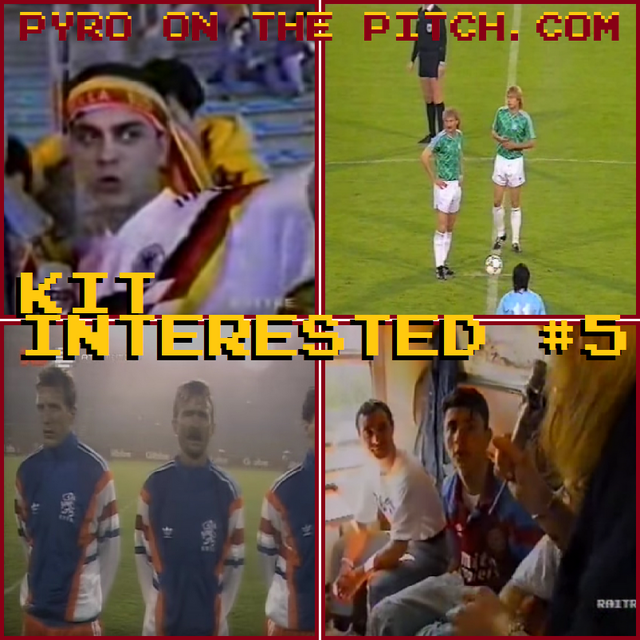 German Shirts at Roma vs Inter:

In 1991, the UEFA Cup final was an all-Italian affair between AS Roma and Internazionale. But a healthy dose of Teutonic flavour was thrown in too, with Germany’s Thomas Berthold and Rudi Völler in the Romans’ starting XI, and Andreas Brehme, Lothar Matthäus and Jürgen Klinsmann turning out for the Nerazzurri (the only other non-Italian in either squad was Roma’s Brazilian defender Aldair).
This meant that a seemingly high proportion of fans on both sides were decked in German colours to support their foreign superstars. The famous Adidas shirt seen at Euro 88 and World Cup 90 was of course the go-to garment, seen on this Inter fan being interviewed on the train en route to the 2nd leg in Stadio Olimpcio: 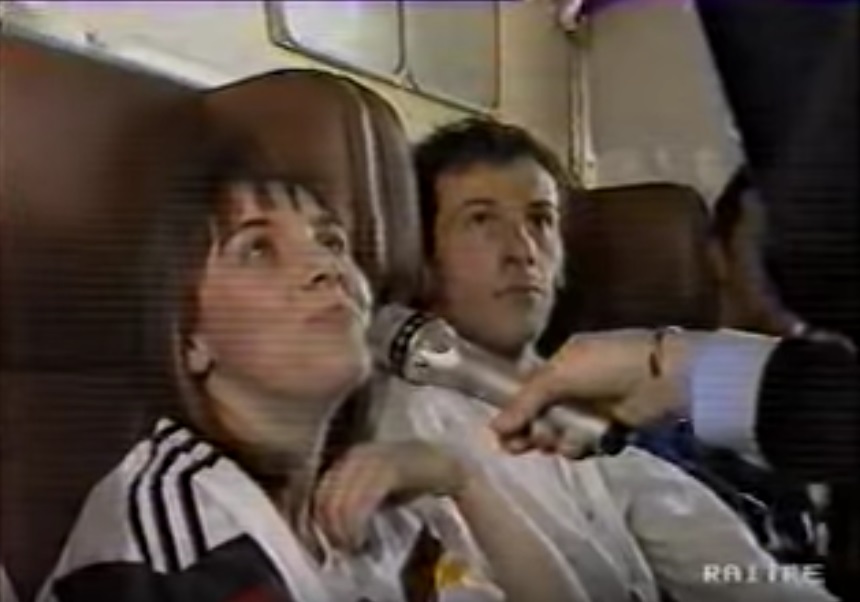 Another Inter fan hanging out the window can also be seen in it: 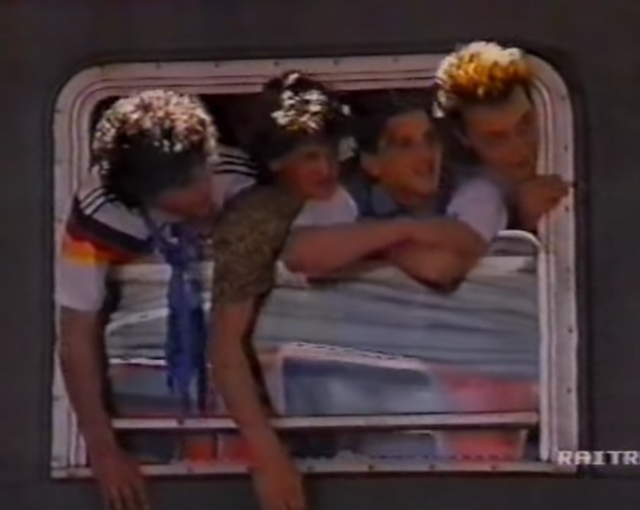 On the Roma side later, we have this young fan discussing their 1-2 aggregate defeat looking well in the jersey: 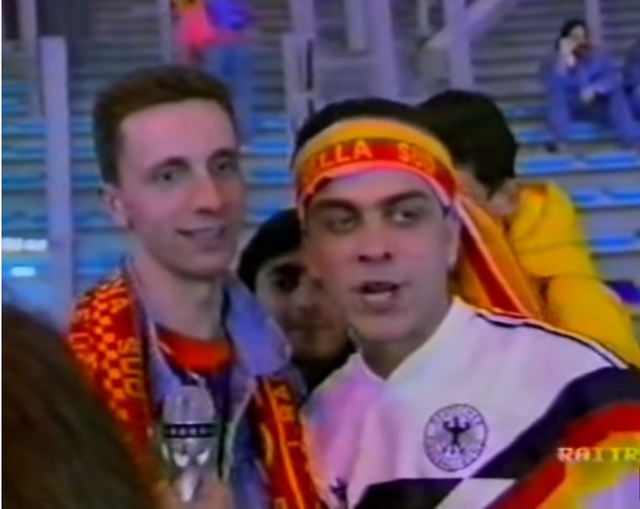 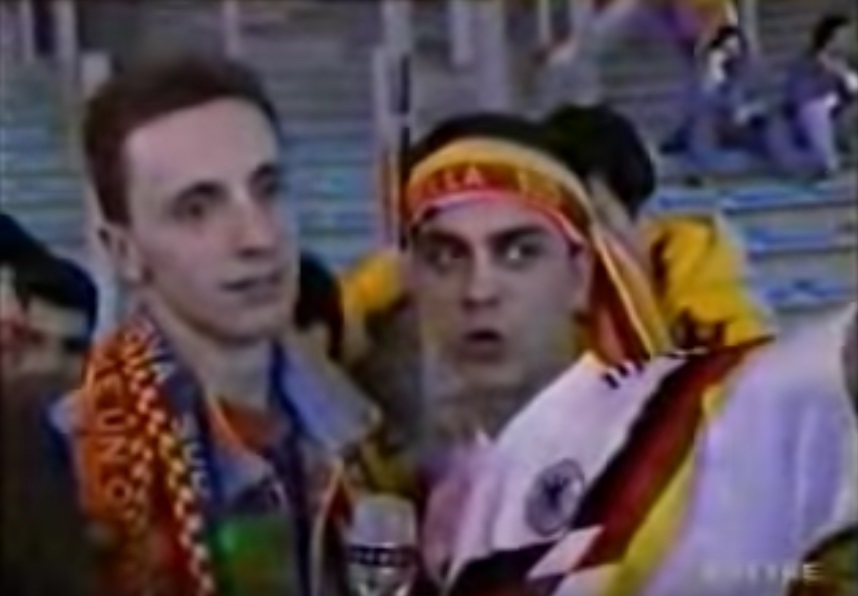 Judging by these instances, there may well have been a lot more German trikots in the crowd. However they weren’t the only classic, non-Italian shirts on show, as this Inter fan, again on the train, decided to throw on his Aston Villa top: 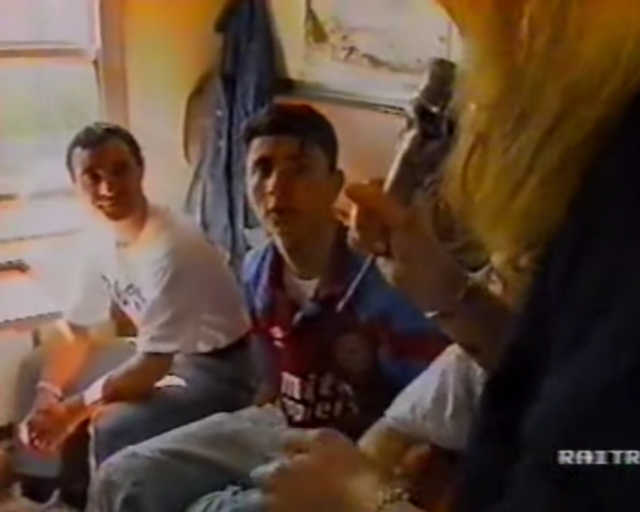 One Roma ultra, wearing his side’s beautiful white away shirt of the time (hard to make out here) at first glance could possibly be wearing a long-sleeved Celtic shirt underneath, but it’s probably just a fashionable sweatshirt: 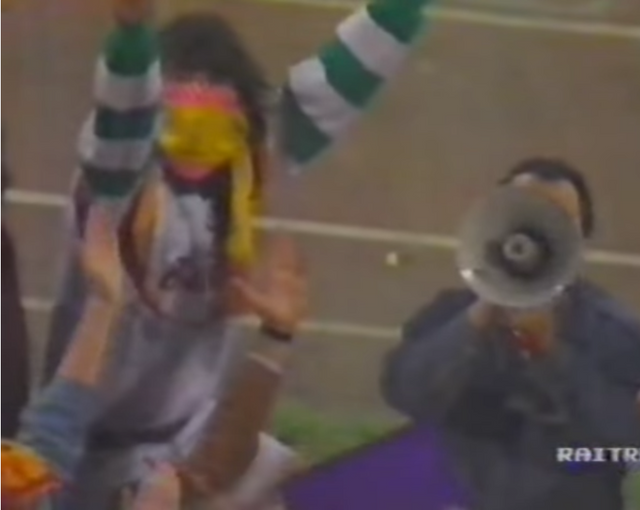 As mentioned in the intro, click here if you have yet to check out this original piece, made in collaboration with friend of POTP and kit-expert Gianpaolo Bon. But since then we have come across/been alerted to a couple more instances of national team goalkeepers wearing the tops of other nationalities.
When the Soviet Union came to Paris for a friendly against France on March 23rd, 1983, nobody would have assumed anything out of the ordinary for the kits, least of all in the goalkeeping department. The last time the USSR had played was against Finland the previous October, when goalie Rinat Dasayev had worn a standard orange and black Adidas kit: 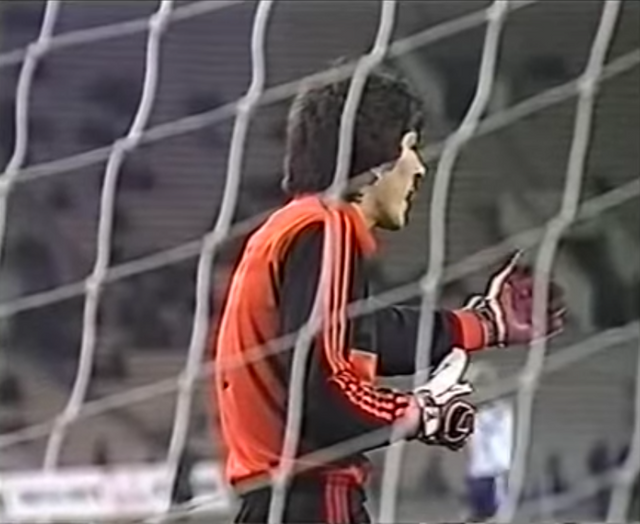 This slightly clashed with his outfielders red shirts, but all-white strips were used for the French trip that would negate this. So either another, darker goalkeeper shirt was brought, which clashed with France’s blue, or it was just plain forgotten altogether as Dasaiev turned out in Parc des Princes wearing a borrowed French top with the crest taped over (if anyone can confirm the real explanation, do get in touch!).
The following example was sent to us by POTP supporter Arman Jannessari on Twitter after our original post, thanks Arman!
In the 1980s, Iran goalkeeper Nasser Hejazi was somehow the possessor of a South Korea shirt, possibly exchanged or given as a gift. According to 11v11, Hejazi hadn’t started either of his nations games against the Koreans in the 1982 or 1986 Asian Games, so it may have dated back to a Presidents Cup match on September 17th, 1978.

For his club Esteghlal, whom he played for from 1980 to 86, Hejazi wore the Korean shirt at least once (probably other times too) in the Tehran derby against Persepolis. But that’s not all, as amazingly his opposing number Behrouz Soltani, (first choice for the 1982 Asian Games) was wearing a Japan shirt.
Iran had played both South Korea and Japan in the 82 Games, so it is conceivable that both shirts did come from that tournament. To wrap things up nicely, in 2011 after Nasser Hejazi passed away, Esteghlal’s ‘keeper at the time Mehdi Rahmati brilliantly wore a Korean replica shirt in the cup final, complete with with Hejazi’s name on the back, and saved a penalty in it during a 4-1 shoot-out win.

From Templates to Tracktops and Back Again:

As the concept of shirt templates emerged in the 1970s, so too did the template of the tracktop, or anthem jacket. By the mid 80s at least, the latter was being given equivalent versions of shirt designs, which of course was a welcome development in our eyes.
This can be seen through a few examples, starting with Wales’ beautiful shirt from 1984 featuring a series of horizontal stripes across the chest (actually with a slightly darker shade of red in between): 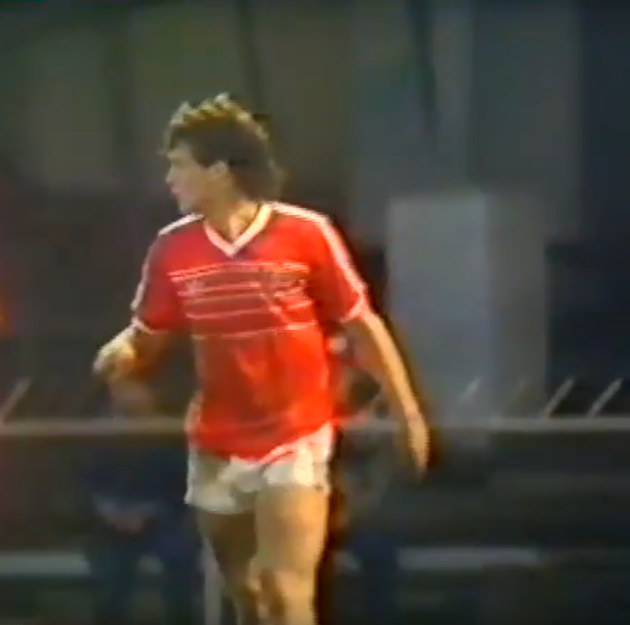 The above picture is from a British Home Nations Championship game against Northern Ireland on May 22nd, 1984. On the opposing bench, the Northern Irish staff can be seen in tracktops using a variation of the same design, at least in the same family: 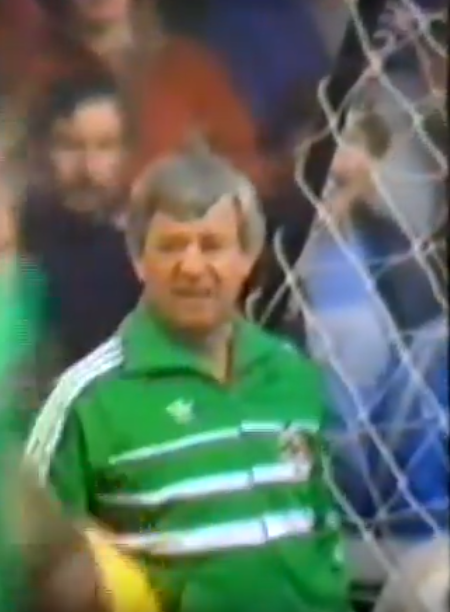 Wales continued with that template up to 1987, by which stage the Republic of Ireland were also now in Adidas and used their own version of the tracktop as anthem jackets. Here it is seen away to Scotland on Februay 18th, 1987, with the trefoil on the other side (so more like teamwear compared to the North’s) and oddly featuring squad numbers, seemingly given at random as starting number 8 Ray Houghton has a number 19 jacket: 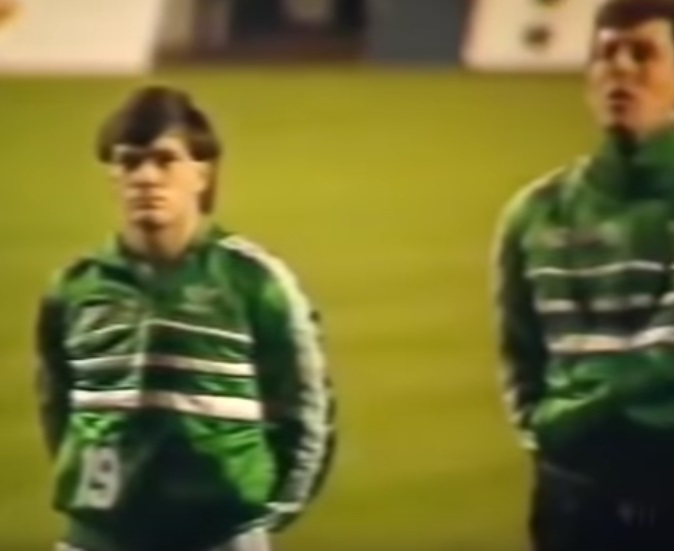 The next year, the most famous template of all time would make it’s debut via West Germany’s kit, which they retained for World Cup 90. For the likes of a pre-World Cup warm-up game against Uruguay on April 25th, 1990, the jacket version was worn: 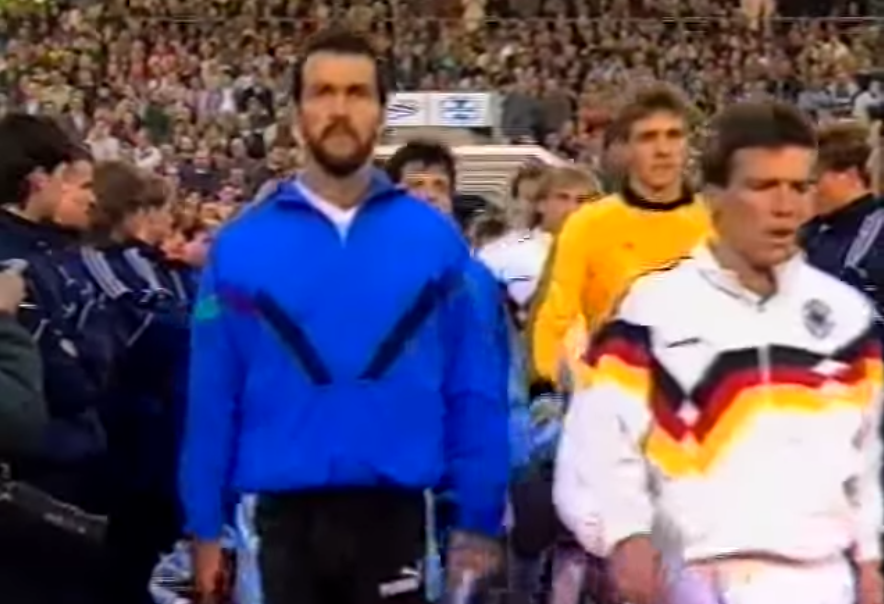 What made this example more interesting than most was a German change-kit combination not seen in the World Cup – green-white-white…: 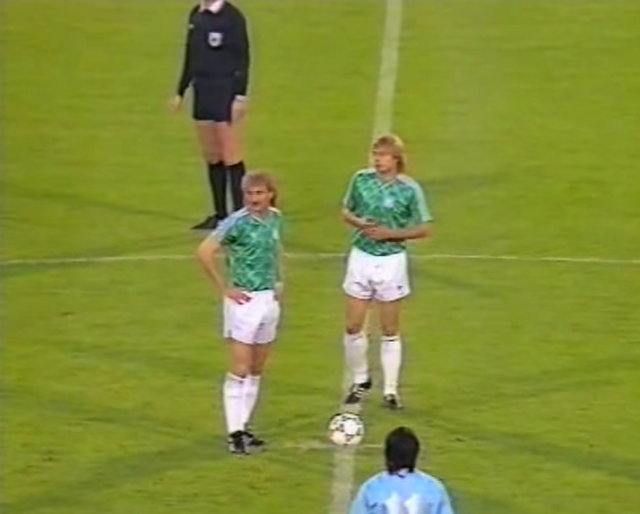 …which, combined with the jackets, from a distance gave the appearance of what it might have looked like had West Germany gone all-white around this time: 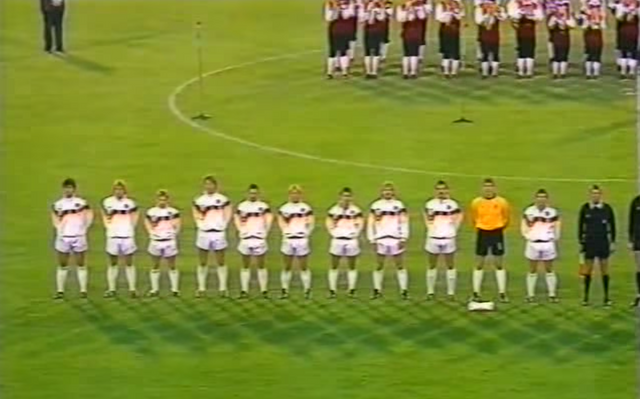 Apparel versions of the template were also used by the likes of Manchester United and Arsenal, and a Northern Ireland sweatshirt modeled by a young Neil Lennon at under-21 level in April, 1990.
Another beloved Adidas shirt seen in Italy that summer was Yugoslavia’s, with a template seemingly made just for them: 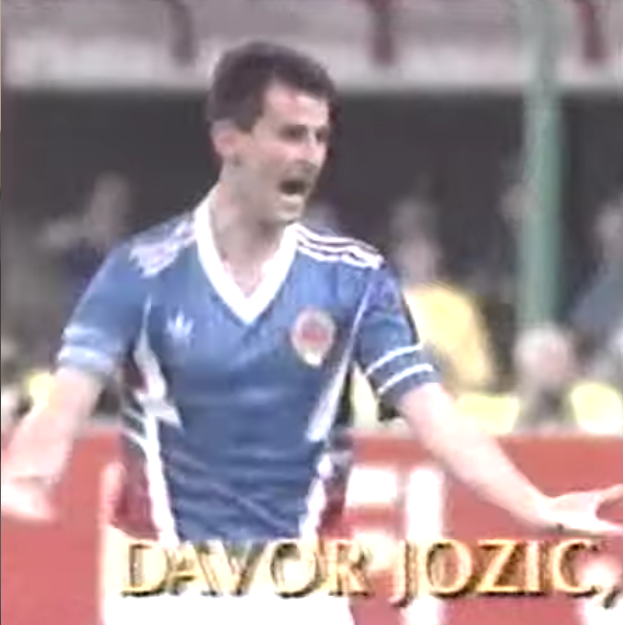 But it also soon turned up on anthem jackets. Here Portugal used a crestless version on October 17th, 1990, with three thick stripes on the sleeves and ribs instead of the two slim ones on the shirt: 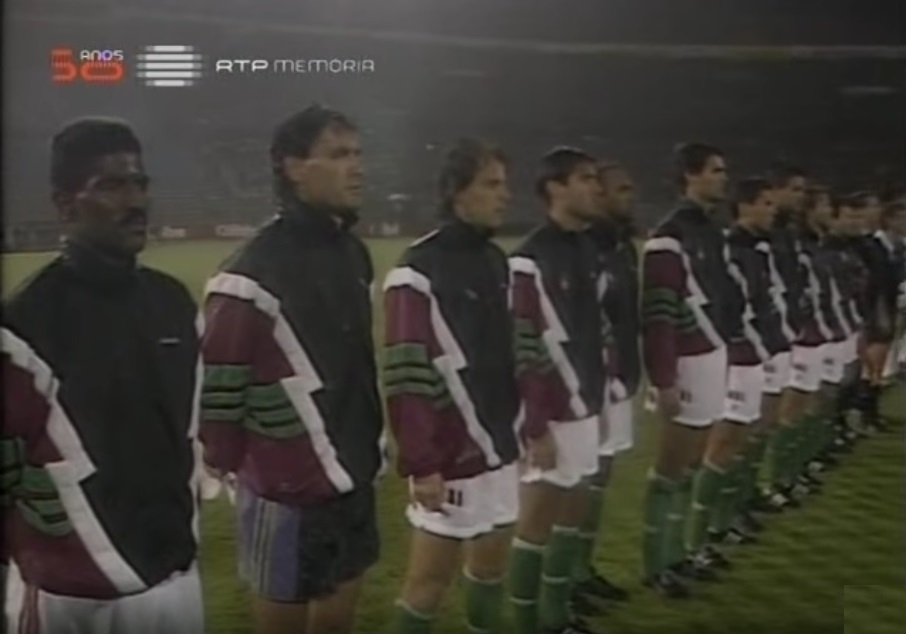 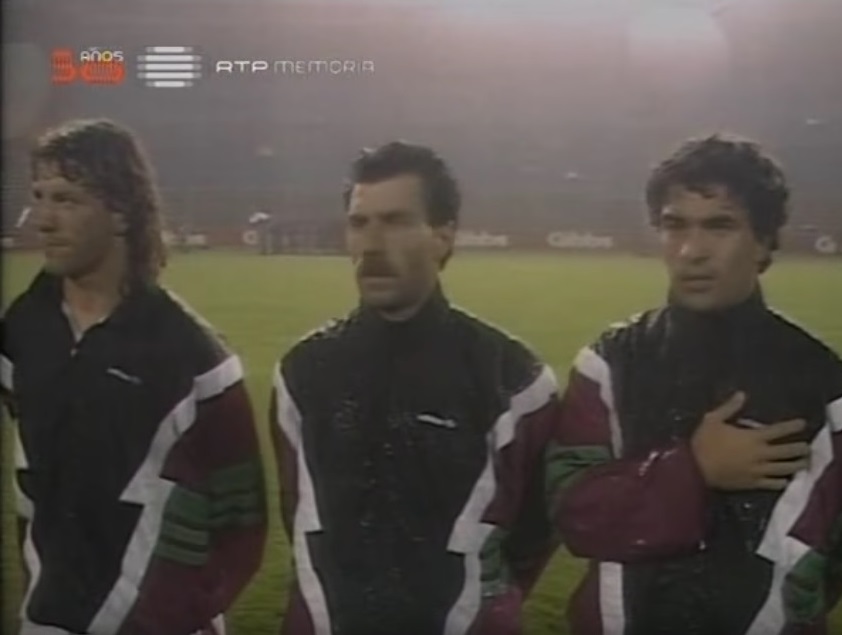 Their Euro qualifier opponents that night, the Netherlands, were wearing the own amazing variant in blue, white and orange, and with one thick red stripe and one smaller blue stripe on the sleeves and ribs to represent their flag: 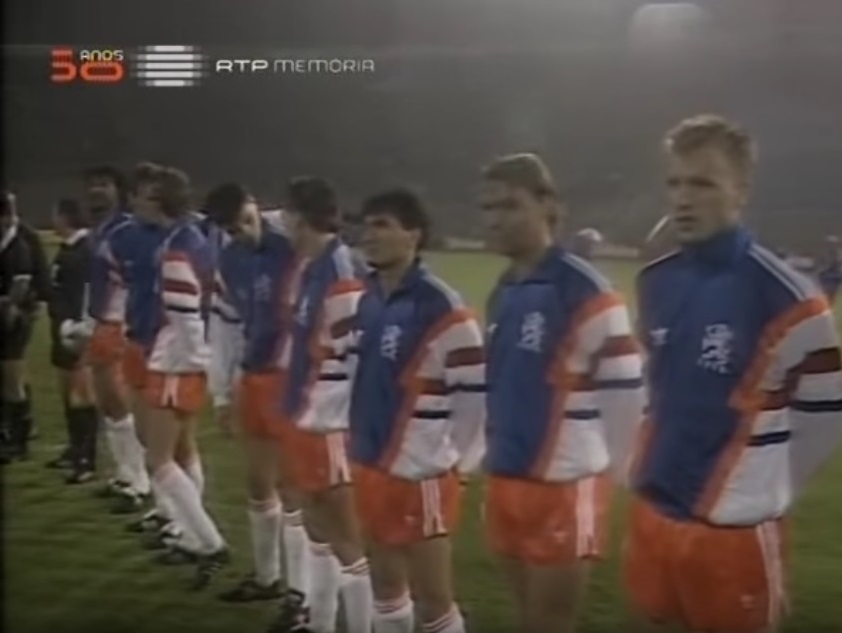 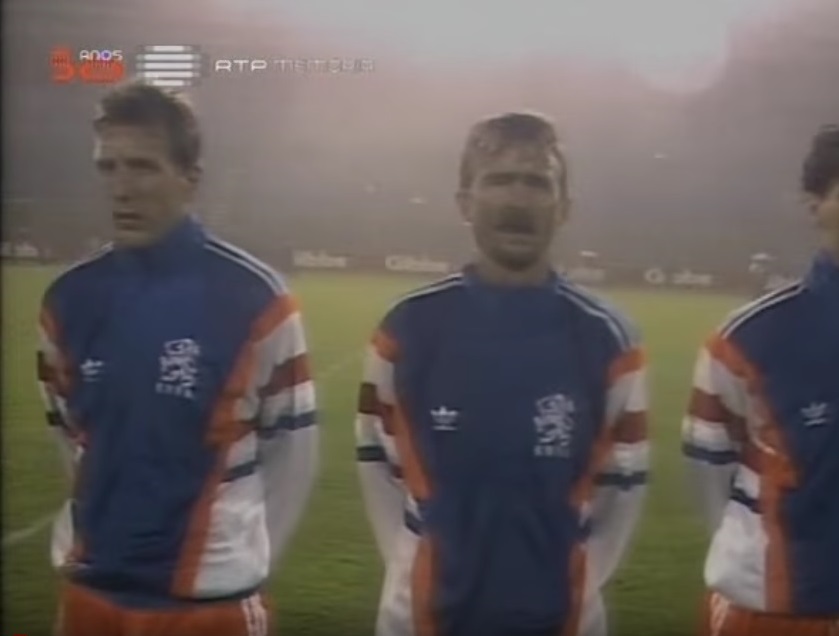 Interestingly, the template was brought back by Nigeria in the 1992 African Cup of Nations and World Cup 94 qualifying, but this was kind of more like Portugal’s anthem jacket as it featured the three stripes on sleeves and ribs: 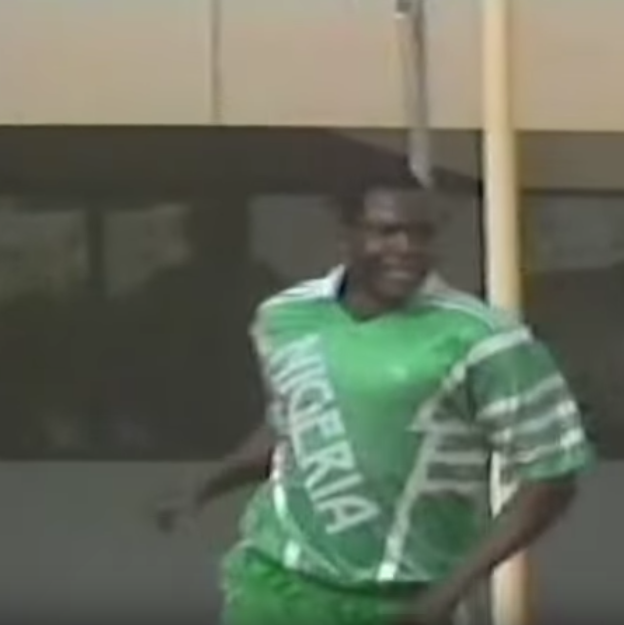