Since the beginning of this series (and hence the beginning of the website) we’ve had the following incident in mind to cover, and, since it’s such a seminal moment in pyro-on-pitch history, the milestone 20th installment of Pyro On The Pitch seemed an ideal spot for it. Click here for all available posts in the series to date (still a few offline for now), including another look at gritty Dutch 80s back in Pyro On The Pitch #2. 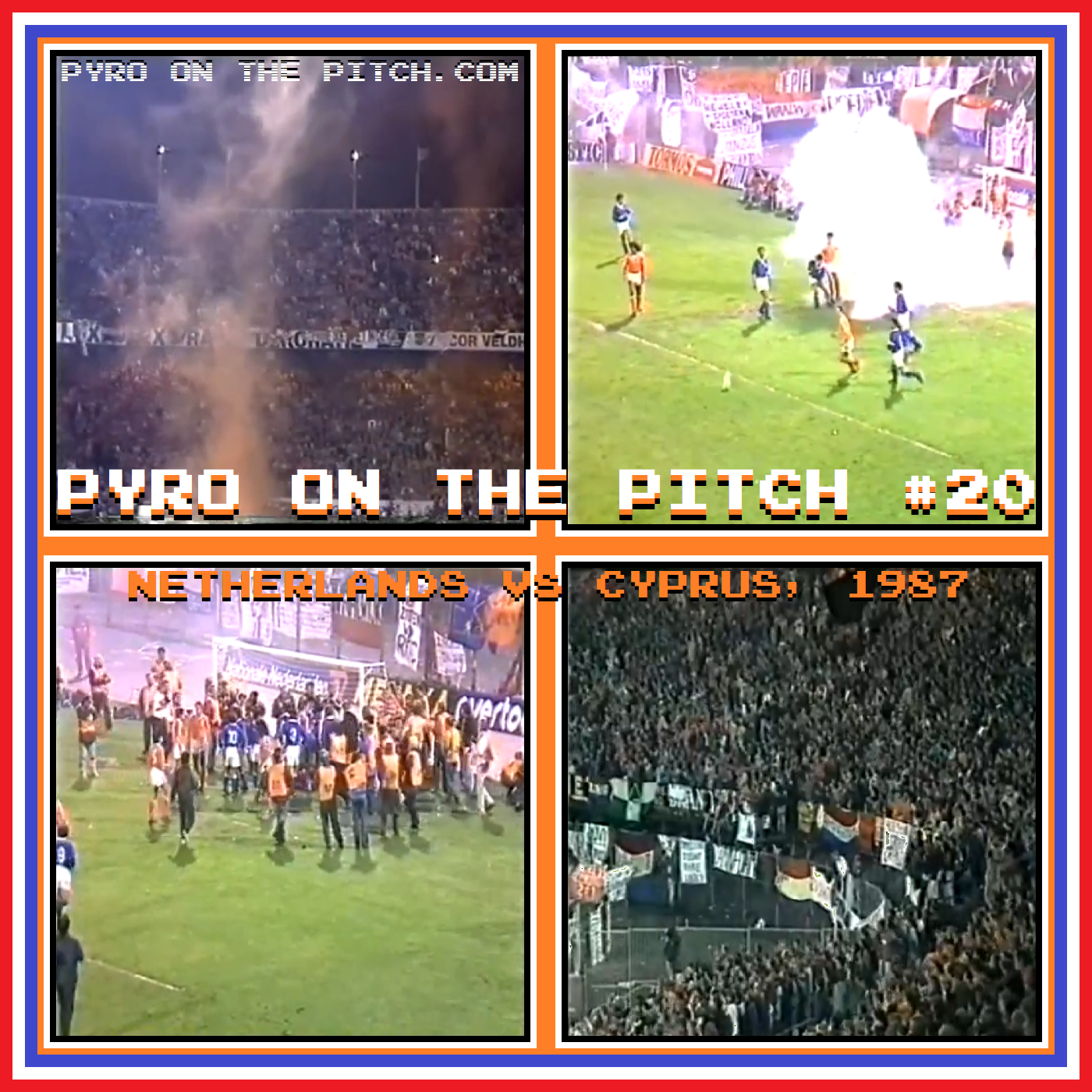 Throughout the 70s and 80s, Dutch football had one of the most “vibrant” crowd trouble scenes in Europe. This climaxed domestically with the riot at Den Haag’s Zuiderpark in March 1987 when Ajax were the visitors – a game we will cover in depth eventually but the details of which can be easily Googled.

Violence was also a factor regarding the national team, as the same hooligans who frequented Feyenoord’s De Kuip and Ajax’s Olympisch Stadion, borrowed from the City of Amsterdam when their usual De Meer was deemed too small, were doubtlessly present for internationals in the same venues, along with their counterparts from other clubs. By 1986 such fans must have been extra tetchy, as going into Euro 88 qualifying the previously great footballing nation had failed to qualify for three major tournaments in a row.

The Netherlands’ first game of the campaign, which would finally lead to regained prestige, came against Poland on November 19th, 1986, at Olympisch Stadion. We nearly get some pyro on the pitch already from this game, but the flash and smoke of the firework thrown form the packed terraces just after the anthems can be seen only landing on the running track:

The match ended in a 0-0 draw, followed by a 0-2 victory away to Cyprus on December 21st. De Kuip saw its first use for the next game on March 25th, 1987, but the guests that day, Greece, shockingly went 0-1 up after 5 minutes to sour the mood.

The Greeks’ justified celebrations were too much for one home supporter in the crowd nearby, who lobbed some sort of iron pipe towards the pitch. Look out for him in the centre of the clip below and the pipe then narrowly missing the linesman, who does notice it land but seems happy enough to just leave it:

A Van Basten equaliser later saved the day, before the Dutch finally picked up a home victory with a 2-0 win against Hungary on April 29th. Again in Rotterdam, below can be seen the sinister fencing around the stands and plenty of debris on the pitch, as well as two interesting flags from supporters that we can’t identify – please get in touch if any ideas:

Another victory, 0-2 away to Poland on October 18th, now put the Orange men (a nicer version) in the driver seat of the group. A win over Cyrpus at home two weeks later would in fact seal qualification, with one game to spare.

De Kuip, aka The Tub, is buzzing with excitement ahead of the Netherlands’ expected first qualification of the 1980s. Pyro and banners are already being held aloft from some of the near-50,000 in attendance before the teams have even come out:

Feyenoord’s famous old ground is also one of the best in the world for chaotic banner hanging and this game is one of the best examples. We’ll see more later, but here are some close-ups including more pyro smoke:

As the teams do emerge, fireworks are let off in one section…:

…while various plumes of smoke cane be seen rising from other areas:

After the match begins, veritable towers of orange smoke can still be spotted in the background:

Seconds after the above – less than a minute into the game – the Dutch score their first goal of the evening to send the already crazed crowd into a frenzy (if a frenzy is indeed considered worse that a craze). As the team immediately go on the hunt for another, even thicker smoke clouds can now be seen in the same vicinity:

But members of the crowd all over the stadium are probably a bit too “overeager” at this point, with adrenaline pumping through their veins as well as other chemicals. As a result, just after the upcoming cross from the clip above, this happens:

A huge “bomb” – not just smoke but with plenty of that too – has been launched/fired from the terraces and explodes with a loud “boom” about a meter away from Cypriot goalkeeper Andreas Charitou:

Incredibly, play continues for what seems like an awful long time after the blast…:

…before things are halted with a shocked Charitou slumping to the ground, smoke wafting around his goalmouth:

The entire press-core are swiftly on the scene as the Omonia Nicosia ‘keeper receives medical attention:

Of course we get slow-motion replays of the moment of impact…:

…and from different angles:

Meanwhile, at the other end, more orange smoke because why not:

The Cyprus goalkeeper is still on the ground, giving photographers plenty of time to take nice intimate shots…:

…while others are just milling about by this point:

A wide shot of the scenes gives us a nicer look at the array of flags and banners:

As the minutes tick on, the crowd wait patiently:

More nice camera shots during the “intermission” gives us a chance to see more nice banners, including many from club sides:

This angles allows us to examine the triple-fence nature of the end, which allows for such amazing hangage…:

…as well interesting random corners and such:

After about 16 or 17 minutes, with the Cyprus ‘keeper substituted, the game is restarted and the Dutch go on to score seven more times to give them what they think is an 8-0 win and qualification secured. Since there was no more pyro of note, we’re just going to keep turning the rest of this into a Heroic Hang Jobs and continue looking at all the flags:

Despite their eight goals, a Dutch win was not to be – the bomb blast was deemed a severe enough attack to annul the game and a replay was scheduled for December 9th, 1987, behind closed doors where else but at Ajax’s De Meer, which would have never hosted a game so big otherwise. With an official attendance of 300, the home side only put half as many past Cyprus than in October, with no Charitou from the start this time: 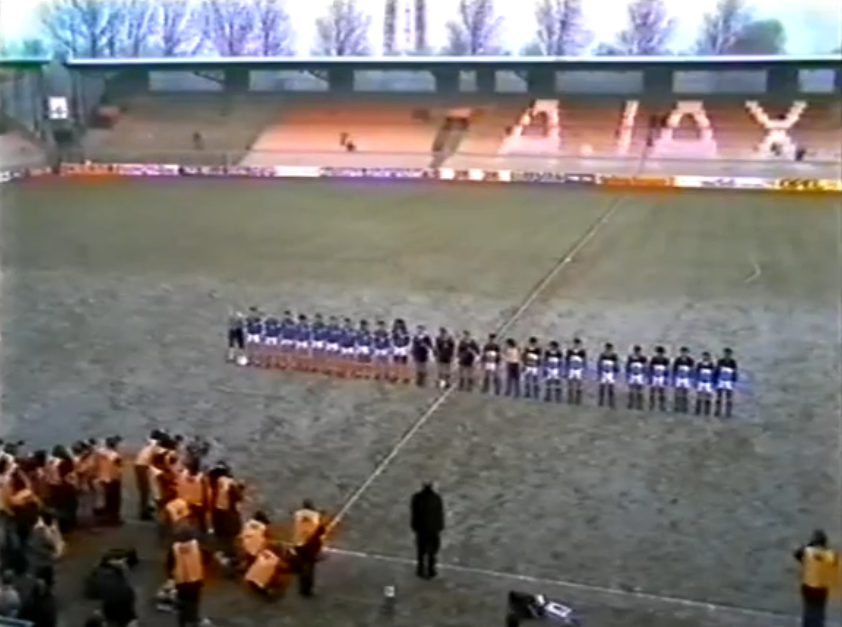 The 4-0 win meant that the last game away to Greece was meaningless and less than 4000 showed up for the exhibition, where a routine 0-3 Dutch triumph finally ended the campaign. It would go on to lead to their first major tournament victory at Euro 88, but the bomb incident had brought the nations’ supporter culture into disrepute for some, foreshadowing what would be a similar event back at De Meer in 1989. But that is a story for another day.