It’s time for another episode of our eponymous flagship series here on PyroOnThePitch.com (click for all installments). Like with People On The Pitch #15, we’re unexpectedly heading deep into the southern hemisphere for this one and to a land not usually known for football culture (unless we’re talking Aussie Rules), but with a distinctly Balkan-European flavour. 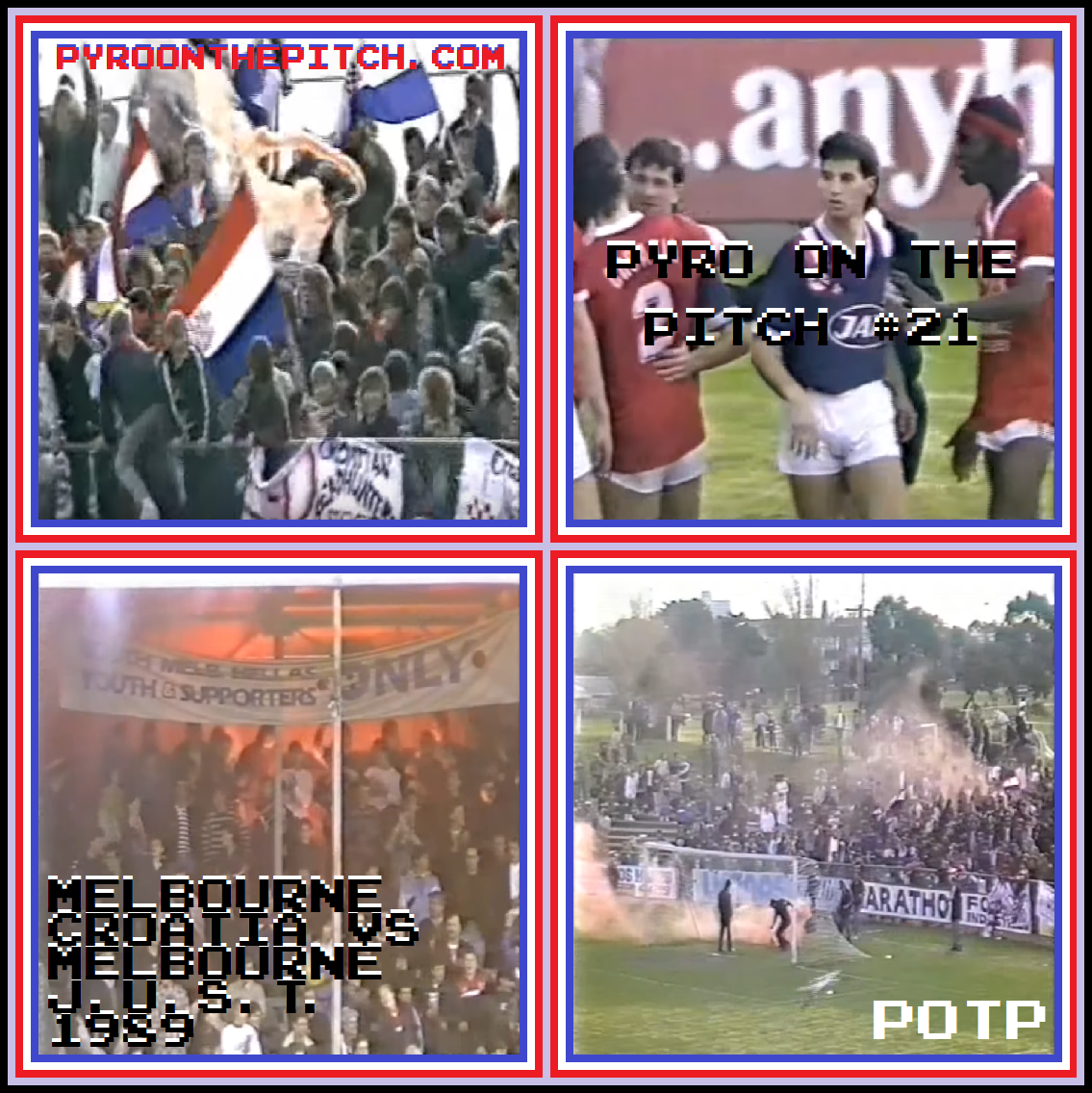 Originating in the Melbourne suburb of Footscray in 1952, it will come as no surprise that SC Croatia – the future Melbourne Croatia and current Melbourne Knights – was founded by members of Australia’s Croatian immigrant population. Throughout the rest of the century, the club would be seen as a beacon of Croatian nationalism while the country was part of socialist Yugoslavia. Ahead of their on-the-field debut in 1953, a need for players sent organisers looking around the city for talent and even to the port to recruit those freshly off migrant boats. Kit colours were chosen to reflect the Croatian flag, with red shirts, white shorts and blue socks.

The club’s base moved to Geelong in 1957, which was a Croatian community hub at the time, and a merger with the area’s own Croat team took place. Another merger was needed a couple of years later with a local Zagreb-specific side to keep the club going, after controversies surrounding the conclusion of the Victorian State League First Division (second tier in the state) had caused a split. Half the team broke away to merge with league winners Preston creating Preston Croat, but the two factions quickly reunited under the SC Croatia name in 1963 when both had ended up in the Premier state league, now playing out of Melbourne.

In 1968 Croatia won their first Victorian championship, but were then expelled from the league in 1972 after fans invaded the pitch and attacked the ref after a sending off during a game against Jewish-backed club Melbourne Hakoah. Supporters claimed that political motives also played a part in the decision, particularly from some in power with links to the Serbian community. To get around this, the club bought-out struggling Victorian Division One Ukrainian-backed club Essendon Lions, changing the name to Essendon Croatia by 1978. That same year saw a return to the state’s top-flight and another league win, repeating the feat in 1979.

The club changed name again in 1982 to Melbourne Croatia and during the period lobbied for entry to the relatively new National Soccer League (NSL, established 1976), along with their sister-club Sydney Croatia. While several other smaller sides were successful in their applications, both Croat teams were denied with the Australian Soccer Federation giving the reason that they could not compete until the “Croatia” part of their names were dropped. Again political motives were suspected. However, with the NSL struggling, authorities were forced to restructure in 1984 and left with little other choice than to grant Melbourne Croatia entry.

A couple of years before Croatia SC formed, the vice-president of Melbourne’s Brighton Soccer Club – Ivan Kuketz, himself of Croatian descent – decided to set up his own team after witnessing the talent of some new European players at Brighton; the result of the post-WW2 immigration wave. Unlike the Croatia club, Kuketz’s vision was a side to represent all of Yugoslavia and in March 1950 the Jugoslav United Soccer Team was formed, quickly becoming known as JUST. The Yugoslav national team colours of blue shirts, white shorts and red socks were adopted, and recruitment occurred at migrant camps across Victoria and New South Wales, as well as from within the ranks of Brighton SC.

Having won the Victorian league title in 1957, JUST merged with the Italian-backed Footscray Capri in 1960 to become Footscray JUST and moved to the area which had originally been home to SC Croatia. The two would become great rivals over the coming years, with JUST thought to have links to the communist Yugoslav regime which many Croat immigrants had fled from. On the other hand, Sydeny’s similar SSC Yugal club was to be a close ally. Further league wins in Victoria were achieved in 1963, 1969, 1971 and 1973, and off the back of this success JUST were among the founding members of the National Soccer League in 1977. The team mostly floundered in the top league however, with the club changing its name to Melbourne City JUST in 1989 in an attempt to attract new fans (we’ve called them Melbourne Jugoslav in the title just to be clearer on who they were).

As we’ve established by now, many of the football clubs being set up across Australia throughout the 20th century were the result of initiatives by immigrants, who had little interest in the popular traditional sports of the original British colonisers – rugby and cricket. Besides Croat/Yugoslav sides, there was also the aforementioned “Hakoah” clubs of Jewish origin – a reference to Austria’s Hakoah Vienna, “hakoah” meaning strength in Hebrew – “Polonia” named teams for Polish communities; “Hellas” often for the Greeks; the likes of Adelaide Juventus set up by Italians; and many more.

With the rise of football hooliganism in the 1970s and 80s, ethnic tensions between teams only added to the fire. A particularly troublesome affair between Hakoah Sydney City and Sydney Olympic – the latter originally known as Pan-Hellenic Soccer Club – caused a riot and was one of the most high-profile incidents of the era. By 1989, the 14-club NSL also included the likes of Marconi Fairfield, Adelaide City and APIA Leichhardt for the Italians (the APIA standing for “Associazione Poli-sportiva Italo Australiana”, the original club name); St. George Budapest obviously of the Hungarians; Preston Makedonia of the North Macedonian (as we’re now calling them) community; Sunshine George Cross, a Maltese club; and, in addition to Sydney Olympic, two more originally-Greek teams in South Melbourne Hellas and Heidelberg United, the latter having formed as “Alexander the Great-Melbourne Soccer Club”.

The two Croatian clubs of Melbourne and Sydney were of course also present in 1989, along with Melbourne City JUST. With the inevitable dissolution of Yugoslavia beginning to take place back in Europe, games between these sides assumed extra gravitas. To add even more on the line, JUST were approaching their lowest ebb of recent times and were one place above the relegation zone heading towards the end of the season. It of course came down to the last game in July between the two Melbourne outfits, where a win for Croatia would not only guarantee them a play-off finals position, but also send their JUST rivals down.

With Melbourne Croatia awaiting the completion of their new ground later in the year, South Melbourne Hellas’ Middle Park is the venue for this huge “Balkan derby down under”. Most of the 5000 in attendance as supporters of the temporary home side:

Besides the main stand above, most of the pitch is surrounded by a small terrace:

At one end behind the terrace is a grassy knoll where some fans can watch from their cars:

At the other side of the same end sits some sort of building, with fans using the steps as vantage point:

At other end, as we shall see in a bit, the Croatia hardcore youth support are standing:

As well as the classic architecture, the pitch itself has its own charm with some random lighter patches:

As mentioned in the background section, the two teams’ kits mirror their respective connected national teams, with older Croat sides during the country’s brief independence of 1941-45 having not yet adopted the chequers design seen later in the 90s:

The crest, though, did of course reflect the now famous shield pattern:

The JUST shirts seem to be made by the same brand, but with Adidas style numbers on the back – some of which aren’t in the best condition:

In the background we can see some Melbourne Croatia staff members with the club shield on their blazers too:

The game itself is 0-0 until the second half when Croatia open the scoring, causing the little terrace to pop off:

We now get our first real look at the proper hardcore section, pandemonium in progress, with many Croatian national flags and a smoke bomb:

With chaos behind him, the JUST ‘keeper stands solemnly still in contrast, aware that his club are now mere minutes from relegation:

Before long the smoke leaves the terrace and ends up in the goalmouth. We have pyro on the pitch and the steward who removes it inadvertent creates an even better visual in his wake:

In another section of the ground, clearly marked for the regular tenants with “South Melbourne Hellas youth supporters ONLY”, there is more pyro as a flare is let off up the back:

As the game resumes, smoke still wafts across one end of the pitch:

Later, a small fracas breaks out with some good, old-fashioned 80s face grabbing:

One of those who plays a part in breaking up the fight is a man who proves that Melbourne Croatia isn’t, and has never been, simply a club for ethnic Croats:

The player in question is London-born Francis Awaritefe who looks particularly bad-ass in his red headband, and he plays a part in Croatia’s second goal soon after, putting the result beyond doubt:

The Croatia fans are enjoy themselves, reveling in their part in JUST’s demise:

Awaritefe encourages the celebrations, possibly requesting more pyro be thrown, but sadly there is none:

The final-whistle goes and that’s it, Mebourne City JUST are relegated while Melbourne Croatia seal a place in the 1989 NSL final play-offs with a 4th place league finish:

The game would in fact turn out to be the last between the two rivals as JUST would fold shortly afterwards, “just” like Yugoslavia itself in the coming decade. In fact the days of the “ethnic clubs” were coming to an end in general, as by the mid-90s a concerted effort was made to scrub clean the scene and make it more presentable to a mainstream audience with awful American-style branding (e.g: South Melbourne Hellas becoming the “Lakers” for a period).

For Melbourne Croatia, a couple more league titles were won in the coming years, but they too were forced to removed the Croatia name and shield becoming the more generic Melbourne Knights. Unable to compete with the new capitalist super-clubs that were springing up, the Knights eventually dropped back down to the Victorian State League upon the dissolution of the NSL in 2004 and subsequent establishment of the current A-League system. Finally in 2006, another split occurred and “Melbourne Croatia Soccer Club Inc” was created, current owners of Knights Stadium but with the Knights still as tenants.