In our last Supporter Snap Back we looked at a classic Brazilian cup final in the Maracana from 1990, click here for that post if you missed it. Now we’re heading for another big end-of-season game (for one of the sides at least) a few years earlier in lower-league Italy. 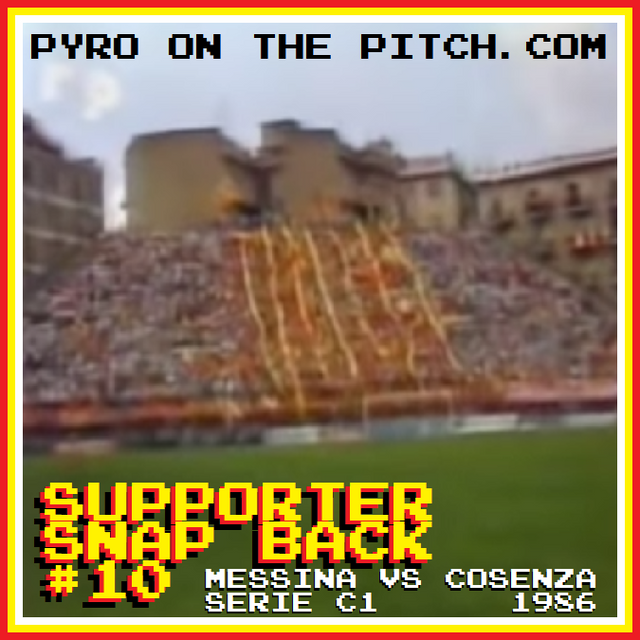 AC Riunite Messina was established in 1947 via the merger of several local sides, becoming successor to the original Messina FC of 1900. Two seasons in Serie A during the 60s was a high point for the Sicilians, but since then the Giallorossa were mostly to be found in the third or fourth tier. A new division, Serie C2, was created in Italy in 1979 and Messina were placed into it; then promoted as Group D champions in 83. Finishing third in Serie C1-Group B in 1984-85, the Biancoscudati (White-shields, as they’re also known) pushed on the following season and were looking toward automatic promotion with a match to spare. A result in the last home game against lower-mid-table Cosenza was needed, who don’t really feature in this at all unfortunately.

The more important matter, as far as we’re concerned, is of course Messina’s fan culture. Following the dissolution of the pre-ultra’ San Paolo Commandos faction, Fedelissimi formed in 1973 as the club’s first official ultras group and took position on Stadio Giovanni Celeste’s Curva Nord. In 1980, a future big group in Gioventù Giallorossa (Yellow-Red Youth) was created and occupied Curva Sud. Another force in the Messina tifo scene came to be in 1983 with the creation of NOCS, Nuclei Organizzati Curva Sud, after the union of Commandos Tigres, Boccetta Boys and Club Montecarlo. Many more ultras groups and sub-groups would emerge over the years at both ends of the ground (and the sides for that matter), featuring some of your classic, more-common names such as Fighters, Ultras 90, Giants, Rebels and Mods, and others more unique like Battleship Giallorossa.

Match day in Messina and there’s a festival atmosphere around the city:

With promotion to the second tier all but assured, tens of thousands flock to the stadium:

Like the 1983 promotion game, Stadio Giovanni Celeste is a packed sea of white, red and yellow:

A cockerel is released onto the pitch, presumably for good luck:

The ultras in Curva Nord…:

…and Curva Sud of course both have displays ready:

As the teams come out, it’s pyro and beautiful chaos:

The Messina manager Franco Scogliois is in confident spirits as the fans greet him:

During the game we get glimpses of the many ultras banners around the ground:

There are even banners from outside the ground:

The final whistle blows and the place erupts – Messina are going up:

There is no full blown pitch invasion, but those who are on the grass unfurl the flag of victory:

The club owner (presumably) is hoisted aloft as another, very international flag is waved:

…some shedding many clothes as they go and getting a bit overexcited:

Finally, there is time for one last lap of honour from everyone:

Back to the city streets, the promotion party can begin. We’ll let these scenes do the rest of the talking on this night when “B” was number one in Messina: 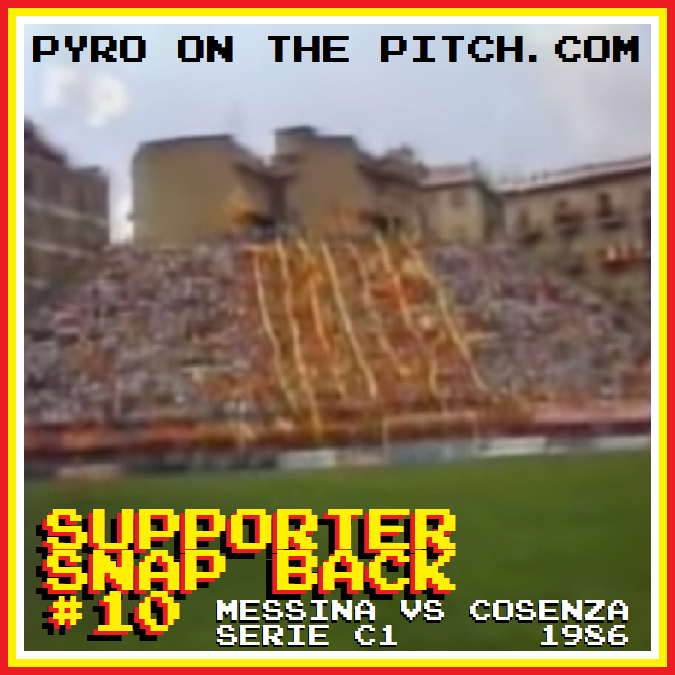