Click here for all episodes in this series where we look at different sorts of pitch invasions. In this installment, we check out two short incidents from Dublin derby games in the early 2000s. For more on Irish supporter culture history, ultras and hooligans, click here to go to our recent Football Special Report post on the subject. 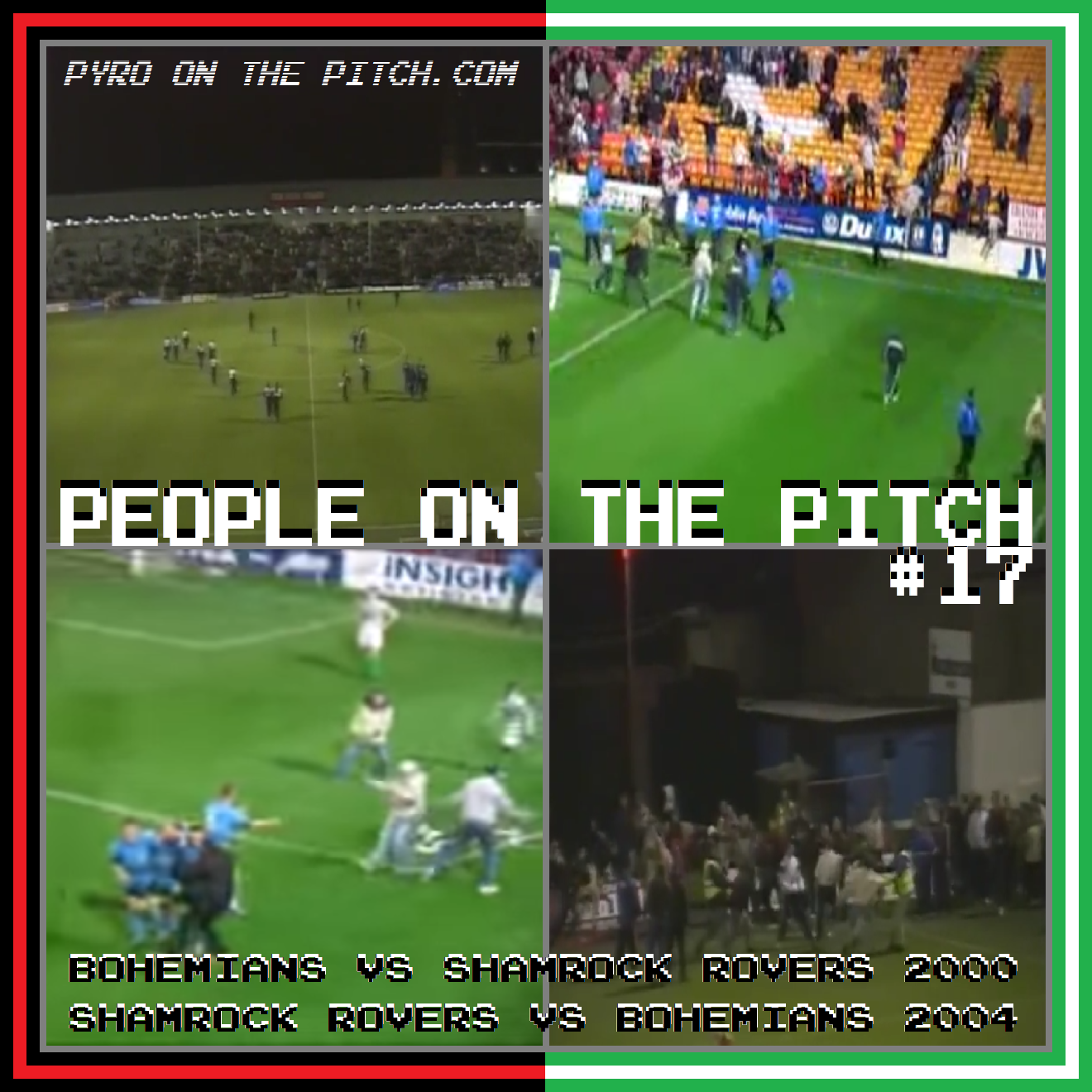 Being Ireland’s most successful club, Shamrock Rovers have attracted their fair share of enemies over the years (as one modern Rovers flag states: “Boiling Piss Since 1899“). Originally established in Ringsend of Dublin’s south inner-city, Rovers moved to Glenmalure Park in the South Dublin suburb of Milltown in 1926. A fellow Ringsend-born outfit, Shelbourne, are the oldest rivals, with North Dublin’s Drumcondra FC emerging as challengers in the 1940s, 50s and 60s. During this time, Bohemian FC – also of the Northside, based out of Dalymount Park – were at their lowest ebb, finishing bottom of the table 11 times between 1945 and 1969 (before the introduction of a second tier) and the rivalry then was considered minor.

In the 1970s, Drumcondra’s financial problems saw them sold and merged into another team, Home Farm, (although later reformed as a regional league club) eliminating one competitor. By the 1980s, Shels were also a shell (pun unintended) of their former selves and would soon be relegated when a lower division was introduced, before moving North into Drums’ old Tolka Park ground to rebuild. Bohemians, on the other hand, had already revived and were crowned champions twice in the 70s, and, despite falling attendances, Shamrock Rovers won four in a row in the 80s – their first league successes since 1963.

This all paved the way for Bohs-Rovers to become perceived as the biggest derby in the city, particularly as a north-south clash, and the rise of football hooliganism added an extra juicy element. Bootboys and skinheads were seen on the terraces of both clubs’ grounds in the 1970s and 80s, with named crews at Rovers at least such as SRFC Mob and the Clockwork Bootboys. In 1992, the first organised, modern firm in the country was established at Bohemians, known as the BSC – “Bohs Soccer Casuals” – while Rovers informally titled “Larrys” casuals were happy to provide opposition.

By this stage, Glenmalure Park had been tragically lost to property developers thanks to the ownership that presided over four-in-a-row, and the Hoops became homeless for the foreseeable future. Until their new Tallaght Stadium would finally be agreed upon and completed in 2009, Rovers were forced to bounce around Dublin as tenants to the other big three (St. Patrick’s Athletic of Richmond Park being the one yet mentioned) as well as facilities not traditionally known for football in the RDS and Morton Stadium. Success on the pitch was also lacking, with a sole league title in 1994 their only major silverware of that or the following decade. Bohemians for their part won the 1992 FAI Cup and finished runners-up three times in the 90s, on an inexorable path towards regaining the main crown twice early in the new millennium. But before that…

On a dark March evening in Dalymount Park, it’s the first Bohs-Rovers game of the 2000s. With Bohemians only avoiding relegation the previous year thanks to a play-off victory, and Rovers having finished just two places above, both sides were doing better this season and battling for the European spots:

The home fans are in a two-thirds full Jodi Stand (above), with more behind one goal in the Shed End:

Away supporters are on the opposite Tramway End terrace, with the waning popularity of the league at this time meaning not such large a crowd as once would have been, or would be again:

Only four minutes in, the match is stopped due to trouble in the Shed as it turns out to have been infiltrated by a sizable contingent of Rovers. Apparently a few of them had come to the entrance gate and said that they had a supporter in a wheelchair. When it was opened, more arrived and rushed the gate. Simpler times, as our source on this commented. Gardaí (Irish police) force the hooligans out of the End and onto the pitch to be moved: (an image of this in progress can also be seen here)

Those Bohs fans remaining applaud and jeer at their rivals’ removal…:

…but the route that the Rovers fans are ushered to is very close to the Bohs hardcore section in the Jodi where the BSC stand. Some of them also enter the pitch resulting in more violence breaking out:

The referee takes the two teams back to the dressing rooms for what turns out to be a 22 minute delay, with the reporter on a later recap commenting that it was not the kind of action that would encourage armchair supporters back to national league grounds: (because violence could never happen at their beloved English clubs, right?)

The offending party end up back in the Tramway End alongside their fellow SRFC supporters, with the game resuming and eventually ending in a 0-0 draw:

A few years later and there’s been a few changes. For one, the League of Ireland has switched to a summer-based season all taking place within the same calendar year. Having captured their first league title for 23 years in 00-01, Bohemians were again crowed champs at the end of the transitional 02-03 season which ended early in January.

Since the late 1990s, Shamrock Rovers played home games in Tolka Park, Morton Stadium, and Richmond Park, before being banished from the latter due to more trouble after a game against Bohs in September 2003. This meant going back to Shelbourne’s Tolka for the next couple of years, but they also used Dalymount as a home venue for one derby in June 2004 (not sure why as Shels weren’t playing there that night).

Rovers’ next occasion hosting Bohs is three games from the end of the season, with the visitors chasing a European place and Rovers sitting second from bottom in the table (although with no fear of going down as Dublin City, a splitter club of Home Farn, had already laid claim the sole relegation spot). With “home” supporters in the Main (opposite camera side) and New Stands (to the left), Bohs fans are in the Riverside Stand with a spattering more behind the goal in the Ballybough End:

On front of a banner with a version of their well known slogan “Bohs Till We Die”, Bohemians’ Glen Crowe breaks the deadlock towards the end of the match with one of his 133 record breaking goals for the club:

Cue mad celebrations and a pitch invasion from delirious Bohs fans in both of their sections:

More and more spill on, with a small army of blue-jacketed stewards halfheartedly attempting to regain order:

One or two do give chase to some of the more animated casuals on the playing surface, but the excitement dies down as most begin the head back to the stands, happy with their imminent victory:

The result of the above game, and a subsequent victory of the aforementioned Dublin City, gave Bohemians third place and qualification for the Intertoto Cup. Shamrock Rovers finished second last, but avoided the regular relegation/promotion play-off as the Premier Division was to expand to 12 teams in 2005 and hence the play-off had been scrapped for 04.

The Hoops would not be so lucky the following year, this time using Dalymount for the whole season which was bad enough on its own. Following an 8 point deduction for financial irregularities, Rovers ended the campaign in 11th before losing to Dublin City in the play-off and went down for the first time in their history, much to never-relegated Bohemians’ fans glee.