Click here for all installments of the “Kit Interested” series, such as issues #4 and #5 where thanks to the research of POTP-friend and kit expert/collector Giampaolo Bon we featured pieces on goalkeepers wearing other teams’ jerseys during matches. This theme continues now with even more examples provided by Giampaolo, plus a general selection of other interesting old school kits and shirts that have caught our eye recently. 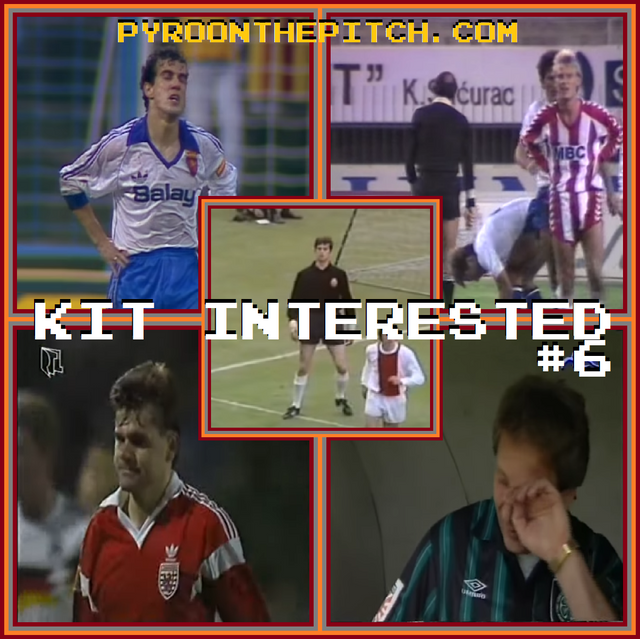 We start this second update with one of the most celebrated keepers of the 20th century in Lev Yashin, more in terms of “wrongly perceived” shirts than wrong team although he also at times wore a club shirt at international level. Yashin was known as the “Black Panther” and the “Black Spider”, due to his athleticism and dark attire for both USSR and Dynamo Moscow, but as can be seen from close ups of his Dynamo shirt here and here the colour he wore was in fact navy.

Yashin retired the year of our next example in 1970, when Leeds United took on Celtic in the European Cup semi-final. This photo of the teams emerging onto the Hampden Park pitch for the second leg on 15 April, on front of 136,505 spectators, shows Leeds’ Welsh international goalkeeper Gary Sparke in a classic grey Italian shirt. This had presumably been exchanged with Enrico Albertosi the previous November after he and Sparke faced-off in opposite ends for an Italy-Wales World Cup qualifier in Rome.

Interestingly, Sparke wasn’t the only Leeds shot-stopper that decade to wear a national team shirt while playing for the club. His replacement David Harvey – born in Leeds but representing Scotland – wore his own red Scottish shirt at domestic level, seen here combined with recognisable yellow Leeds shorts in 1978 two years after his last international cap.

Similarly, following Sparke’s Italy shirt in 1970, it wouldn’t be long before another international goalkeeper jersey was seen in a continental club competition. During the entire 70/71 campaign, ending with the final at Wembley against Ajax on 2 June, Panathinaikos and Greek keeper Takis Ikonomopoulos wore an José Ángel Iribar Spain shirt that had been exchanged during Spain vs Greece in 1970.

We move across to a couple of European national shirts in domestic Argentina now, the first coming from Enrique Vidallé who represented his country a handful of times around 1979 while playing for Gimnasia de La Plata. Among these caps was a friendly away to West Germany in Berlin on 12 September, after which he exchanged shirts with Werder Breman’s Dieter Burdenski. The red trikot given was later recycled by Vidallé while playing for his next club Estudiantes, seen here during his during his single season there in 80/81.

Our other example from the Argentine league is more of a mystery, with Independiente’s Uruguayan Carlos Goyén appearing in an Italian shirt sometime during his stint there between 1981 and 1985. Goyén’s only cap for his nation came against Luxembourg in 1980, so perhaps this was exchanged after an underage game.

Lastly we have yet another Italian shirt, this time of the club variety and originally worn by the legendary Dino Zoff. After his Juventus beat Glentoran in the last 16 of the 1977/78 European Cup, Zoff gave his jersey to the opposition’s Dennis Matthews, who can be seen wearing it here back home as he did for the rest of the season. In 2012, Glentoran released a grey goalkeeper shirt in honour of the historic tie, and the jersey situation, celebrating its 35th anniversary as part of the overall 130th anniversary of the club.

Ferencvaros shared a couple of very similar shirts designs with Celtic in the early-mid 90s as they adopted hoops for their traditional green and white after also signing with Umbro, but with more sponsors:

A sponsor also appeared on the backside of the 93/94 kit:

Combined with Kispest–Honvéd for this Magyar kupa final on 15/06/1994, the kits also have a very Bohemians vs Shamrock Rovers look to them:

But we’re not finished with the Celtic links, as we go from exchanged goalkeeper shirts earlier to a possibly exchanged manager shirt. Ferencvaros manager Tibor Nyilasi – seen here rubbing his eyes after crowd trouble resulted in the release of teargas nearby – is wearing the 1992-94 Celtic away shirt during the cup final, which is odd since we can’t find evidence of the two playing even in any friendlies at this time but the patch on the sleeve does suggest some sort of friendly tournament:

Another club echoing Celtic later in the 90s were RC Lens with their Umbro made/sponsored shirts, seen below vs Paris Saint Germain, Division 1, 15/03/1998. But the template was actually the previous one used by Celtic for their last season with CR Smith as sponsor:

Yugoslavia for once not wearing all-white as a change kit, forced to instead use their red home socks away to white-socked Argentina, 28/12/1996:

Denmark’s Aalborg away to Hajduk Split in Cup Winners’ Cup, 30/09/1987, displaying their red and white striped shirt and shorts combination:

It’s Hummel made of course, with the chevrons also continuing down from the sleeves to the sides of the shorts:

And on the back, huge numbers in the same style as the Danish national team at the time:

Luxembourg almost gave Germany a Halloween shock on 31/10/1990, when they came back from 0-3 down to nearly clinch a draw against the recent World Champions. The Lux shirt was also notable for the unusual sight of the Adidas trefoil on the same side as the crest:

This may have been because Adidas gave the low-priority, smaller country a set of bare teamwear shirts, on which the manufacturer logo would probably be on the left, with the Luxembourg FA deciding to place a crest on that side too rather than go reversed “Belgian-style”:

We may have Hungary also in teamwear shirts in 1990, this time by Umbro, suspected due to the fact a white patch was used for the crest at this friendly at home Turkey, 05/09/1990:

Nice navy Ireland anthem jackets made by O’Neills, circa 1985:

Internazionale away to Cagliari in Serie A, 26/09/1982, in their interesting blue home shorts and socks phase:

Before becoming world famous in their World Cup 02 Le Coq Sportif gear, Senegal competed at the 2000 African Cup of Nations in another famous design with a version of the France 98 Adidas template, seen here vs host country Nigeria, quarter-finals, 07/02/2000:

Like the above, this is one to remember for a future Templates of Doom post with Trabzonspor‘s nice adaption of Adidas Equipment for a change strip, worn at home vs Aston Villa, UEFA Cup, second round-first leg, 18/10/1994:

A friendly between New York Cosmos and Peru was played on 04/04/1982 at Giants Stadium, New Jersey, which featured this crazy brawl. Like boxing gloves, many players on both sides wore socks on their arms, presumably to protect their flesh from any nasty falls on the hard artificial field:

A pair of goalkeeper gloves are also used by the below player, while Peru’s kit itself is worth mentioning as a two-striped Adidas knock-off after having been with the real brand up until 1981: