Click here for all in the APMFVGFH series. For this installment we’re looking at a double-bill of special Japanese-Italian games, released on the same day in 1995.

***Credit to the original gamers and uploaders, YouTube links at the bottom***

While looking for games to cover in this series, we remembered the existence of Shijō Saikyō League Serie A: Ace Striker, published by TNN in Japan for Super Famicom on 31 March 1995. As you may have guessed from the “Serie A” part, the game was officially licensed by the Italian Football League and Associazione Italiana Calciatori (Italian Footballers’ Association), featuring all real top-flight clubs and players for 1994/95 but in an anime style. What’s odd is that it was not the only officially licensed Serie A game released for the platform that day, but we’ll come back to that:

The intro video starts with a football hurtling through space, past which some of the clubs’ crest fly by:

We get to see great pixel representations of the crests of Bari..:

The San Siro appears to set the backdrop for the main title screen…:

…with the fiery Ace Striker text that follows hopefully a reference to pyro:

We next get what is basically our only “virtual tifosi” in this game, with some fans and flags below this nice game-select scoreboard:

The in-game action is not all that exciting to be honest, but here’s that anime style we were talking about:

This applies even more so to these single-frame cut-scenes of the goalkeepers whenever they concede:

Celebrations such as the human-centipede also make an appearance:

At half-time another stadium backdrop is used, appearing to be the San Paolo: (not sure if it’s that every time or just because Napoli are playing here)

And at full-time, the winner is celebrated in absolutely lavish way:

The games can also go to penalties, or spot-kicks can be played on their own, from which we get a brief look at the casual-crowd:

After being 1-3 down above, amazingly Juve came back to win 4-3, typical. But we get another beautiful, lavish screen to appreciate:

That’s all we have for “Serie A: Ace Striker”. But as mentioned above, on the same day in 1995 another game licensed by the IFL and AIC was released for the the Super Famicom in Japan: Super Formation Soccer 95: della Serie A by Human Entertainment, again featuring all real clubs and players from Serie A. We can’t find any more information about the situation, so our best guess as to why two games were created is that this one was aimed at an older audience:

This is evident as soon as the intro starts as we are greeted by a shady individual with a flare – one of the first references to ultras or pyro in video game history: 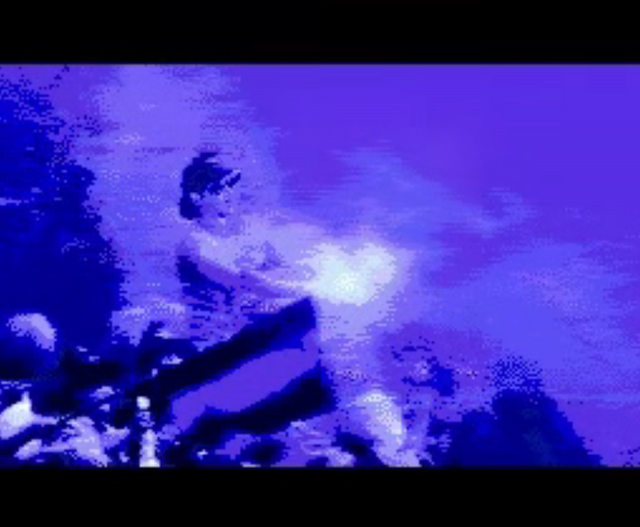 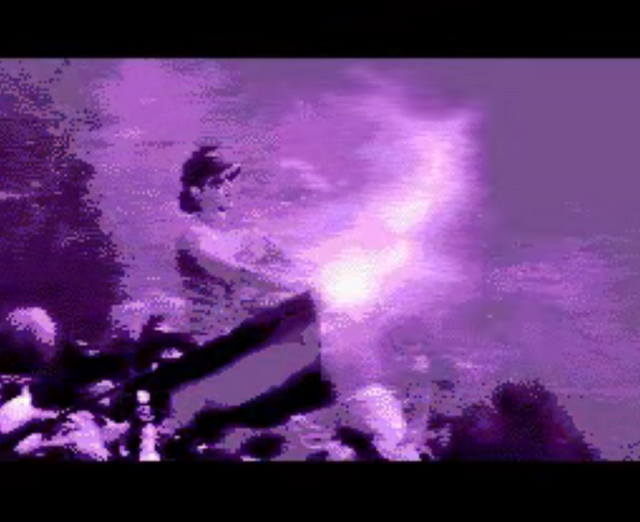 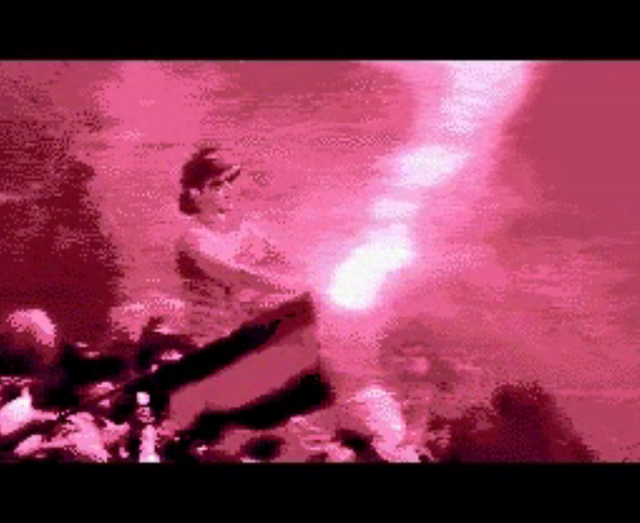 This increases ten-fold for the next scene, again with the San Siro but now focusing on Inter’s notorious Boys San and other ultras with a slew of flares: 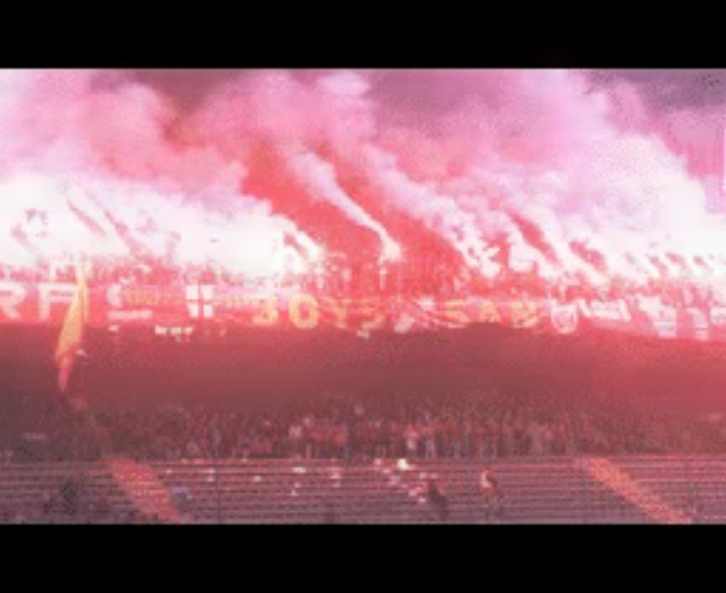 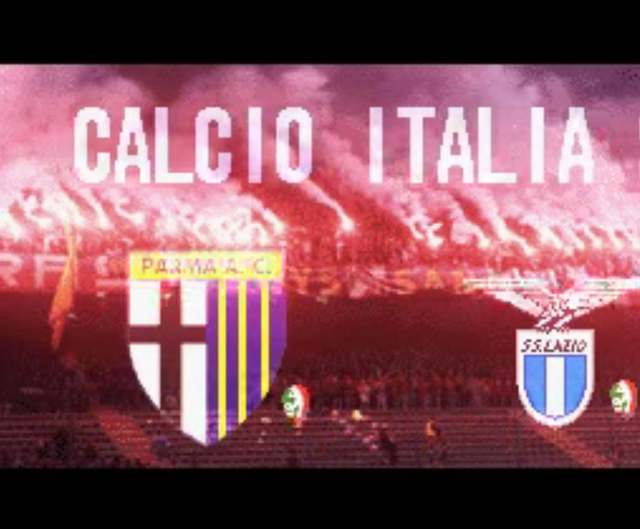 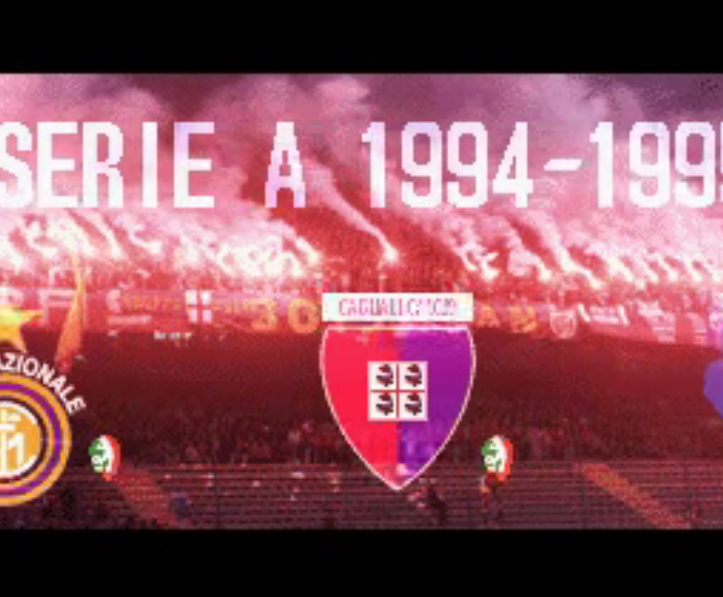 …followed by some black and white photos of some actual calcio: 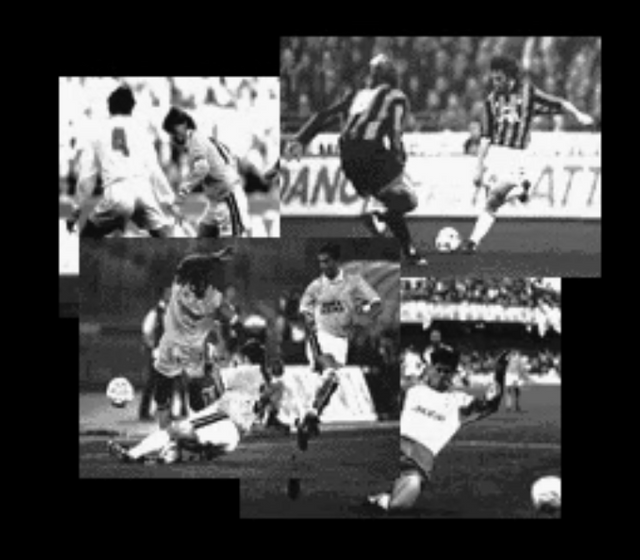 The start-screen appears next with nothing particularly special, except for the handsome pixel-Italian flag: 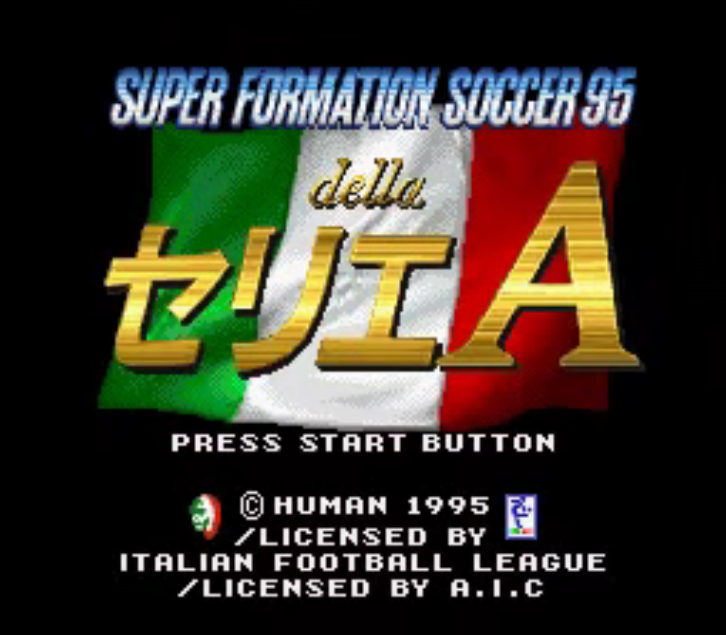 We’re not going to go through every crest individually again, but they can all be seen in the team-select screen and slightly cleaner than the other game: (not “shiny”) 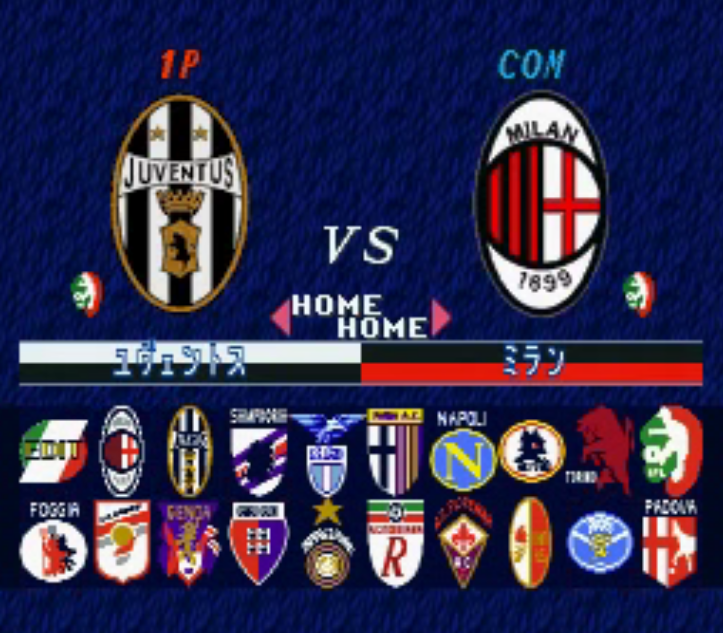 As mentioned, the game features real-life line-ups with a classic a Lazio side here: 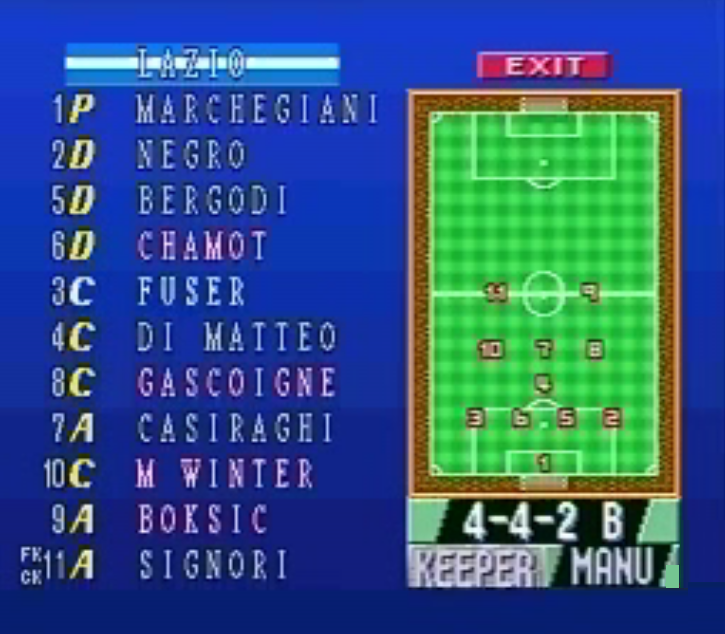 The in-game POV faces up the pitch, which is good as it means we get to see the curvas: 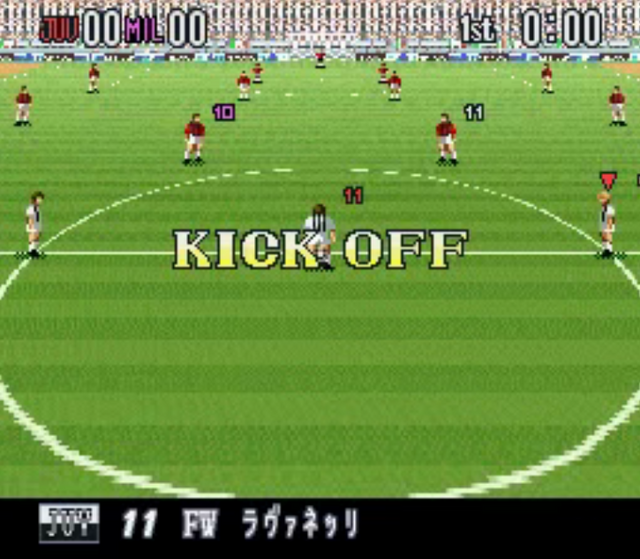 First though is this hilarious desert which extends off forever from the side of the pitch: (which explains why the camera isn’t stationed there) 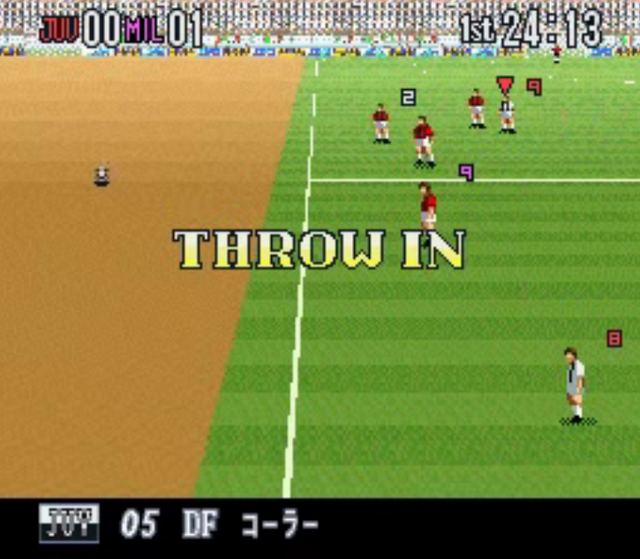 Behind the goal, numerous banners are hung: 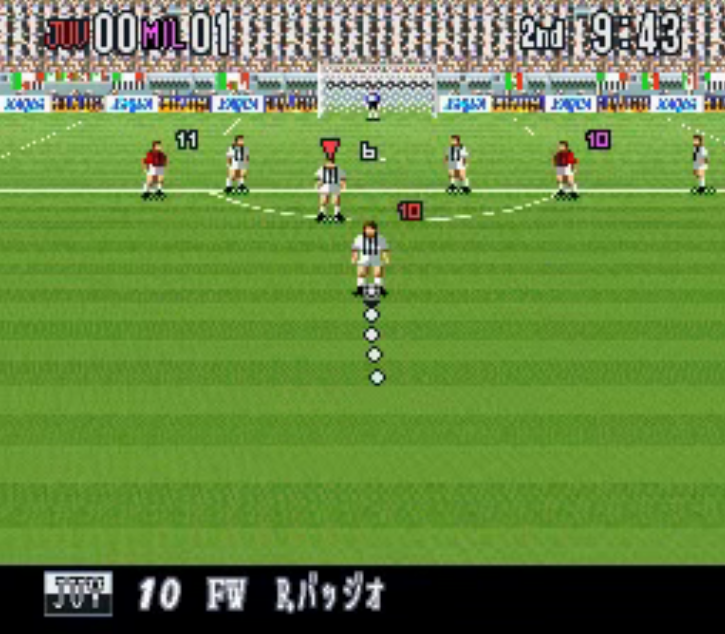 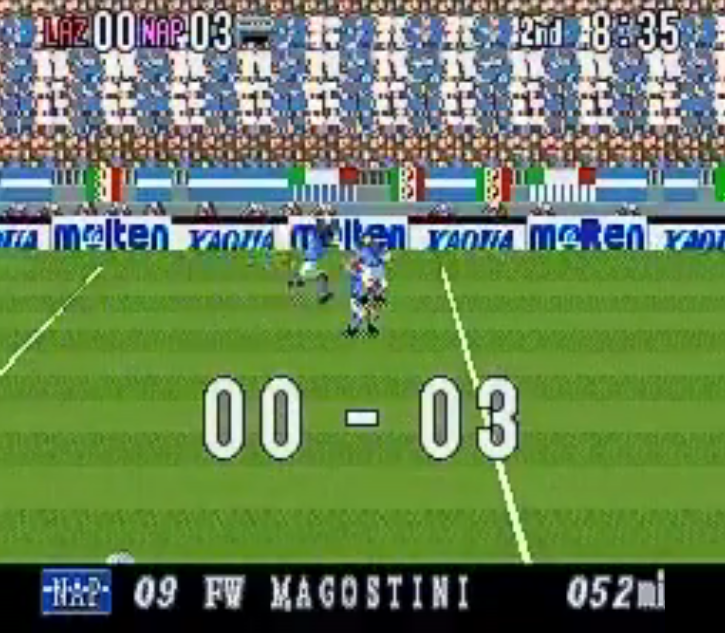 As well as perhaps a representation of a coreo, or else what is meant to be the fans wearing the club’s colours. Either way we dig it: 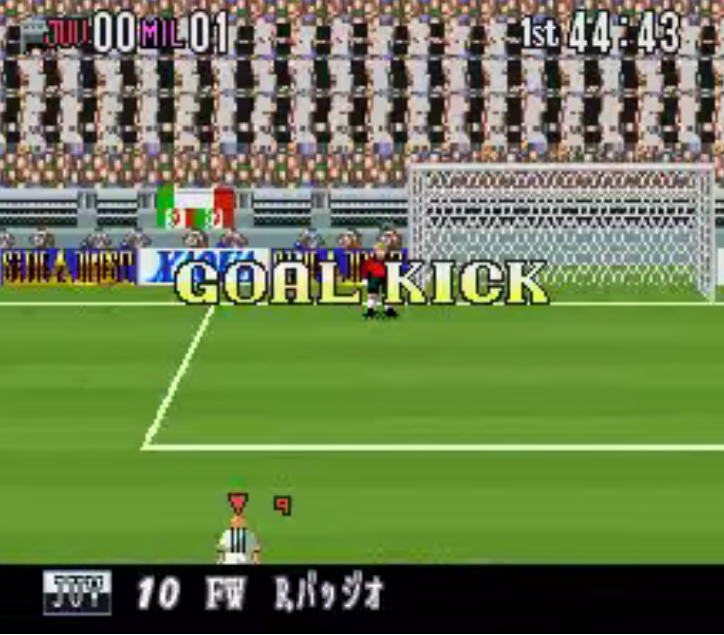 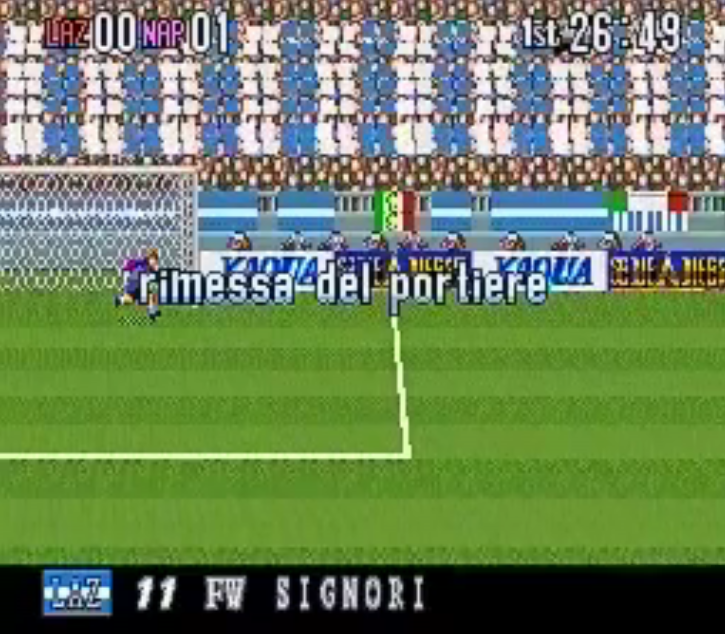 Finally, there is no extraordinarily lavish screen for the winners unfortunately: 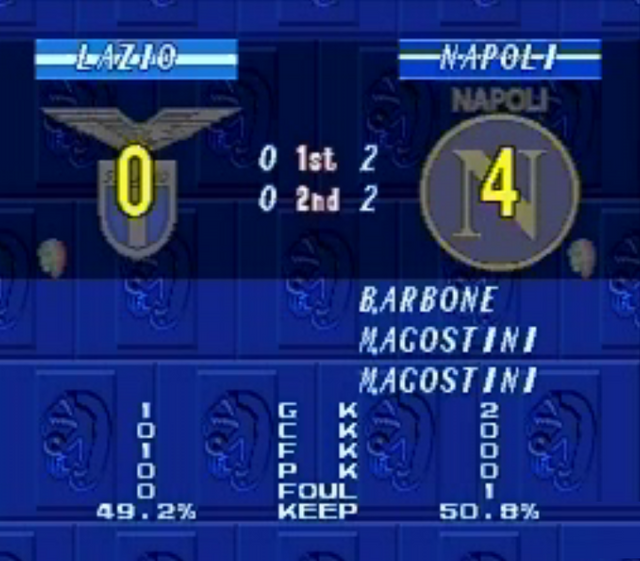