The following article originally appeared in issue #75 of Reds Independent‘s “Red Inc.” Shelbourne fanzine. We’re now uploading it, along with this one, to coincide with 100 years of League of Ireland, today 17/09/2021 being the anniversary. 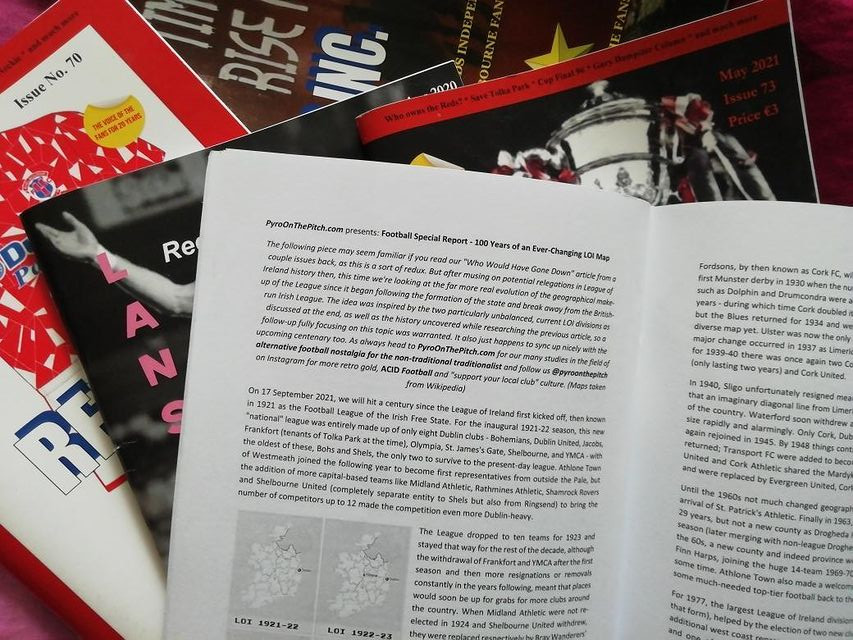 On 17 September 2021, we hit a century since the League of Ireland first kicked off, then known in 1921 as the Football League of the Irish Free State. For the inaugural 1921-22 season, this new “national” league was entirely made up of only eight Dublin clubs – Bohemians, Dublin United, Jacobs, Frankfort (tenants of Tolka Park at the time), Olimpia, St. James’s Gate, Shelbourne, and YMCA – with the oldest of these, Bohs and Shels, the only two to survive to the present-day league. Athlone Town of Westmeath joined the following year to become first representatives from outside The Pale, but the addition of more capital-based teams like Midland Athletic, Rathmines Athletic, Shamrock Rovers and Shelbourne United (completely separate entity to Shels but also from Ringsend) to bring the number of competitors up to 12 made the competition even more Dublin-heavy.

The League dropped to ten teams for 1923 and stayed that way for the rest of the decade, although the withdrawal of Frankfort and YMCA after the first season and then more resignations or removals constantly in the years following, meant that places would soon be up for grabs for more clubs around the country. When Midland Athletic were not re-elected in 1924 and Shelbourne United withdrew, they were replaced respectively by Bray Wanderers’ spiritual successors Bray Unknowns, getting Wicklow on the map nice and early, and Cork’s first of many league clubs Fordsons FC – workers’ team of the Ford motor factory and originally known as “Fords FC”.

Dundalk in Louth joined Bray, Cork, Dublin and Athlone as a town/city with Loi status in 1926, not in the form of Dundalk FC but their forerunners Dundalk GNR (Great Northern Railway) who had originally been a rugby club. But Athlone, having finished bottom with only 5 points in 1927-28, then failed to make re-election, titling the map in a very East Coast direction to close out the decade. Fordsons, by then known as Cork FC, will have welcomed the addition of Waterford FC to create the first Munster derby in 1930 when the number of teams increased back to 12, while more Dublin clubs such as Dolphin and Drumcondra were also now present. In 1932 Waterford resigned for a couple years – during which time Cork doubled it’s membership briefly with the addition of Cork Bohemians – but the Blues returned for 1934 and were joined by the debuting Sligo Rovers to create the most diverse map yet. Ulster was now the only Irish province yet to be represented in the League. The next major change occurred in 1937 as Limerick were added to increase Munster’s standing further, and for 1939-40 there was once again two Cork teams in the form of Cork FC’s replacements Cork City (only lasting two years) and Cork United.

In 1940, Sligo unfortunately resigned meaning the 40-41 league would only be 11 teams deep, and that an imaginary diagonal line from Limerick to Dundalk was now cutting off the entire West/North of the country. Waterford soon withdrew again, followed by Bray Unknowns as the map was reduced rapidly and alarmingly. Only Cork, Dublin, Dundalk, and Limerick remained until Waterford yet-again rejoined in 1945. By 1948 things continued to look healthier in a 10-team League as Sligo also returned; Transport FC were added to become the Carlisle Ground’s latest tenants in Bray; and Cork United and Cork Athletic shared The Mardyke ground for Cork’s latest derby, until the both folded and were replaced by Evergreen United, Cork Hibernians and Cork Celtic throughout the 1950s.

Until the 1960s not much changed geographically, with only the odd insignificant footnote like the arrival of St. Patrick’s Athletic. Finally in 1963, a new town were granted Loi status for the first time in 29 years, but not a new county as Drogheda FC were formed to create the original Louth derby that season (later merging with non-league Drogheda United to create the current club). Before the end of the 60s, a new county and indeed province would at last get a place in the form of Donegal/Ulster’s Finn Harps, joining the huge 14-team 1969-70 league after a 12-side division had been in place for some time. Athlone Town also made a welcome return that season as part of the expansion, bringing some much needed top-tier football back to the Midlands.

For 1977, the largest League of Ireland division ever of 16 teams was arranged (lasting five years in that form), helped by the election of two new clubs: Galway Rovers FC, providing some much-overdue additional West Coast representation and morphing into the more familiar Galway United by the 80s; and one of the most mysterious entities to modern fans in Thurles Town of Tipperary. Thurles unfortunately came last in 1977-78 and then twice again during their five year stint as a league club, never rising above a 9th place finish. But the brief appearance of a team from a county like Tipperary, which hadn’t been seen or heard from before or since, continues to leave away-day enthusiasts fantasising of more exotic new opponents around the island, such as the oft-talked about Tralee Dynamos in Kerry.

At the end of the 1981-82 season, Cork’s latest side Cork United (previously known as Albert Rovers/Cork Albert/Cork Alberts) went bankrupt and withdrew, leaving both the city and county without a side for the first time in 58 years. To make up for this and for Thurles leaving, a 14-team league was used for a couple of seasons until 1984 when 16 returned for a one-off campaign: the first to feature relegation, as a new First Division was planned for 85-86. Cork City were created and entered to plug the Cork-sized hole, while another new county was given access to the league in Longford and Longford Town FC, whetting the appetite for many a Midlands derby to come with Athlone.

The creation of the First Division meant the chance for several new areas and clubs to enter the league, principally Monaghan’s Monaghan United; Kilkenny’s E.M.F.A. (future-Kilkenny City); Cobh Ramblers in County Cork; and Newcastle West in County Limerick. Bray Wanderer’s also brought league football back to Wicklow after Transport had withdrawn in the 60s, and perhaps most notably former-Irish League club Derry City joined after their exile from what was now Northern Ireland’s system with its sectarianist complications. In total, at the start of what could be considered the modern Loi era (with two divisions), this meant a Premier Division of counties Cork, Dublin, Galway, Limerick, Louth, Westmeath and Waterford; and a First Division of Cork, Derry, Donegal, Kilkenny, Limerick, Longford, Louth, Monaghan, Sligo and Wicklow.

The league remained remarkably stable over the next 15 years, with the only real change being Newcastle West’s withdrawal to leave Limerick as a one-club county again (continuing today with Treaty United inheriting the spot). In 2002 Kildare County FC formed and were entered into the First Division meaning their namesake became the first new county represented since the expansion. Wexford Youths then joined in 2007 to replace the failed Dublin City, who had been the final successor to several capital-based clubs entered to replaced Newcastle West. Although it was not know at the time, this was the most spread out League ever over the two divisions with nine areas from Leinster represented, four from Munster, three from Ulster, and two from Connaught.

Things began to go sour the following season of 2008, as first Kilkenny disastrously withdrew before the season began – a great loss to the League along with their marvellous Buckley Park – followed by the addition of another hugely unnecessary Dublin-based club in Sporting Fingal. After the failure of Dublin City FC in all its guises, and the fact that the main four Dublin clubs all still needed/need more public support as it was/is, most rational Loi people knew this entity would likely soon go the same, doomed way. Within a couple of years this was indeed the case, but more unfortunately 2008 First Division champions Cobh Ramblers were not given a League licence after propping up the bottom of the Premier in 2009 and dropped out for a number of seasons, while Kildare County were also gone as a club by the end of that year. Another county already with Loi representation in Galway were given not one, but two more spots, as Mervue United and Salthill Devon both joined the 2010 First Division and finished second last and last respectively.

With Cobh’s relegation and subsequent banishment, Bray Wanderers’ bizarrely became Cork City’s closest away game in 2009, at a distance of 273km. Cork’s own relegation due to financial irregularities at the end of that year, joining other Munster clubs Waterford and Limerick in the First Division, then created a unique situation where the Premier was overwhelmingly northern for 2010 and 2011. Amazingly, Bray were the most southerly club for these seasons until Cork returned in 2012. The next major casualty came later that year however as Monaghan United resigned during the campaign, at least being replaced by a returning Cobh in 2013. Galway was also condensed by mandate following the relegation of Galway United and subsequent withdrawal of Mervue and Salthill, so as not to have a massively-bloated collection of three clubs with minimal support-basses from the same area competing in the same division. But in 2015, the same logic wasn’t applied to Dublin as Cabinteely FC were entered, leaving the capital once again with six clubs over the two divisions (UCD being the other yet mentioned).

After the “northern premier” of 2010 and 2011, the 2021 First ended up as the most southern Loi division since 1925-26, pre-Dundalk. Indeed fellow early members Athlone Town – from a location that would rarely be considered “north” in any context – are currently the most northern club in the second tier, as they were briefly in the whole League at that time back in the 1920s. Conversely, if it wasn’t for Waterford’s presence in the Premier, Shamrock Rover’s Tallaght Stadium would be the most southerly ground in that division right now (and with Waterford hovering above the relegation zone at the time of writing, this could well become a reality in 2022). With so few clubs in the League overall, and the general mess Irish domestic football has been in for so long (mainly thanks to most people not supporting local), it is perhaps inevitable that such geographically lopsided tables would emerge from time to time. But while we wait on Loi clubs to appear from within the rest of former-Irish Free State in Carlow, Clare, Kerry, Leitrim, Loais, Meath, Offaly and Roscommon, a new united-Ireland is possibly only a few years away and a united football competition potentially even closer than that, meaning finally a true “national” league (probably not called that) covering the entire island might just be around the corner.