Click here for all in the Football Special Report series. After a lot of extremely long FSRs recently, we’re now going back to the original concept of a quick look at an interesting match. 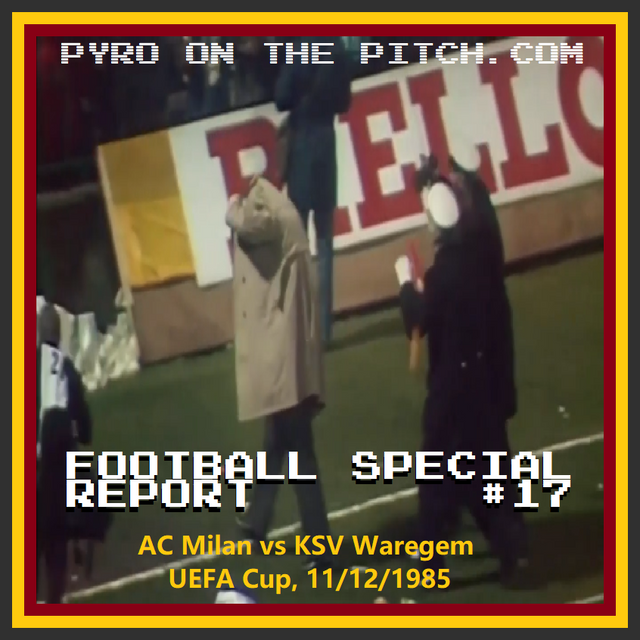 Belgian club KSV Waregem started life in 1925 as the French-named “Waereghem Sportif”. In 1945 this was changed to the Dutch “Waregem Sportief”, before merging with Red Star Waregem the following year to become SV Waregem. As was standard in Belgium at the time, the club gained the right to the additional title of Royal after 25 years in existence, “Koninklijk” in Dutch, resulting in the final name of KSV – Royal Sports Association – Waregem in 1951.

Waregem’s greatest success up until the 1980s was finishing 4th in the 1967-68 Belgian First Division and winning the 1974 Belgian Cup. The latter gave them their first taste of European competition, being drawn against and defeated by Austria Wien in the first round of the 1974-75 Cup Winners’ Cup. The record high finish of 4th was repeated in 1984-85, which by then qualified the team for the following season’s UEFA Cup. After handily defeating AGF Aarhus of Denmark in the first round, the Belgians knocked-out Osasuna in the second. The draw for the third round then gave Waregem their biggest tie of all time against AC Milan.

The Italian giants were welcomed to Waregem’s Regenboogstadion (“named after the rainbow jersey worn by the cycling road world champions, since it was inaugurated to host the 1957 UCI Road World Championships”, Wikipedia) for the first leg on 27 November 1985. In a game where Milan’s shirts were the only non-white garment on outfield players on the pitch (the home side wearing their change strip), Daniel Veyt amazingly scored for the 5th game in a row in the competition to put the home side 1-0 up (below), before Pietro Paolo Virdis equalised with an away goal on 88 mins to take the wind out of the nearly 20,000 in attendance going into the second-leg.

Curva Sud in San Siro is in usual fiery form ahead of the game on a cold, December Wednesday night, with Fossa Dei Leoni and Brigate Rossonere:

At the other end, Milan now in all-white thrill the home crowd with a classic strike from journeyman Mario Bortolazzi (in fact his only goal in this stint for the club):

From the celebrations, as well as giving us a nice look at some banners in the background, we also get a better look at this interesting pin-striped Milan away shirt: 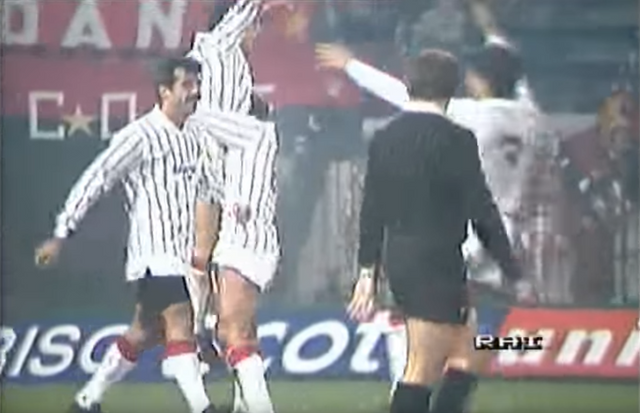 Now ahead 2-1 on aggregate and with an away goal to boot, the Milanese in attendance are surely fully confident of progression against these Belgian nobodies:

But a minute before half-time, this happens and the referee signals for a penalty to Waregem: 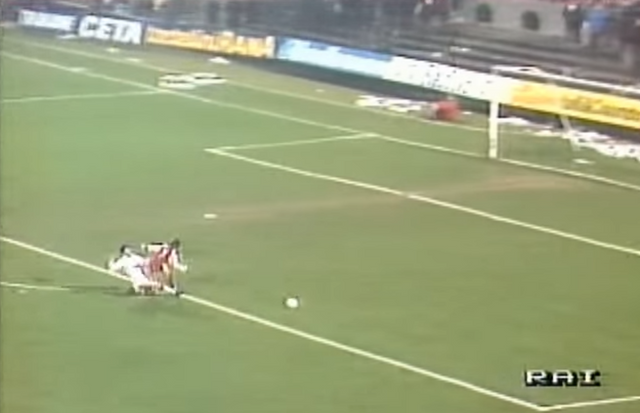 As the player lays on the floor and Milan players protest that he had been taken down outside the box, objects from the Curva can already be seen raining down on the pitch:

What seems to be a golf ball followed by a can of beer can clearly be seen landing while the players argue:

With the ref going to the linesman for guidance, the inevitable happens and a ball-shaped object hits the Waregem right back on the head: 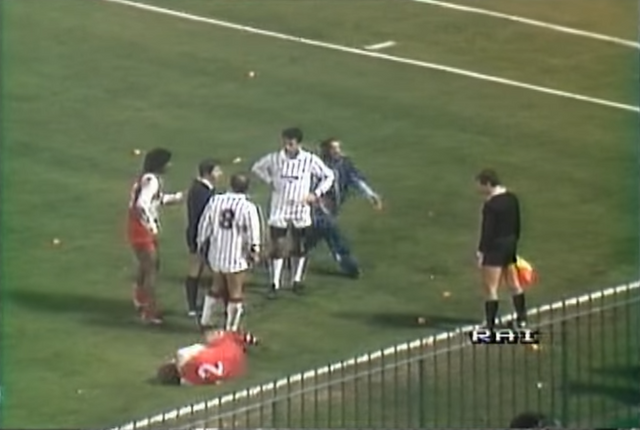 From a higher definition version, it seems like a lot of the debris is actually fruit like oranges, which may have been what hit the player: 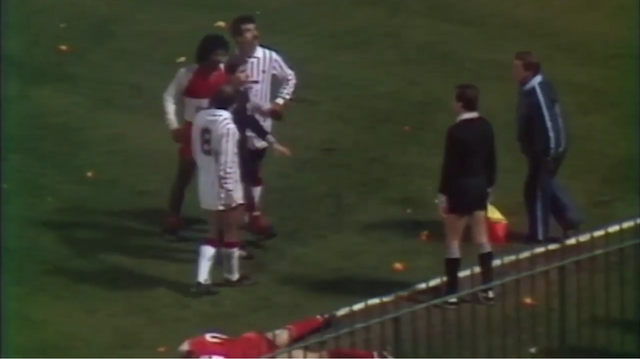 The referee doesn’t even seem to notice the downed Belgian, but concludes along with the linesman that it is indeed a penalty, while stewards attempt to clear some of the projectiles:

The goalkeeper Giuliano Terraneo displays his displeasure with the decision by taking the ball off the spot, but all in vein:

As the penalty-taker prepares, fans can be seen milling around the small lower terrace: 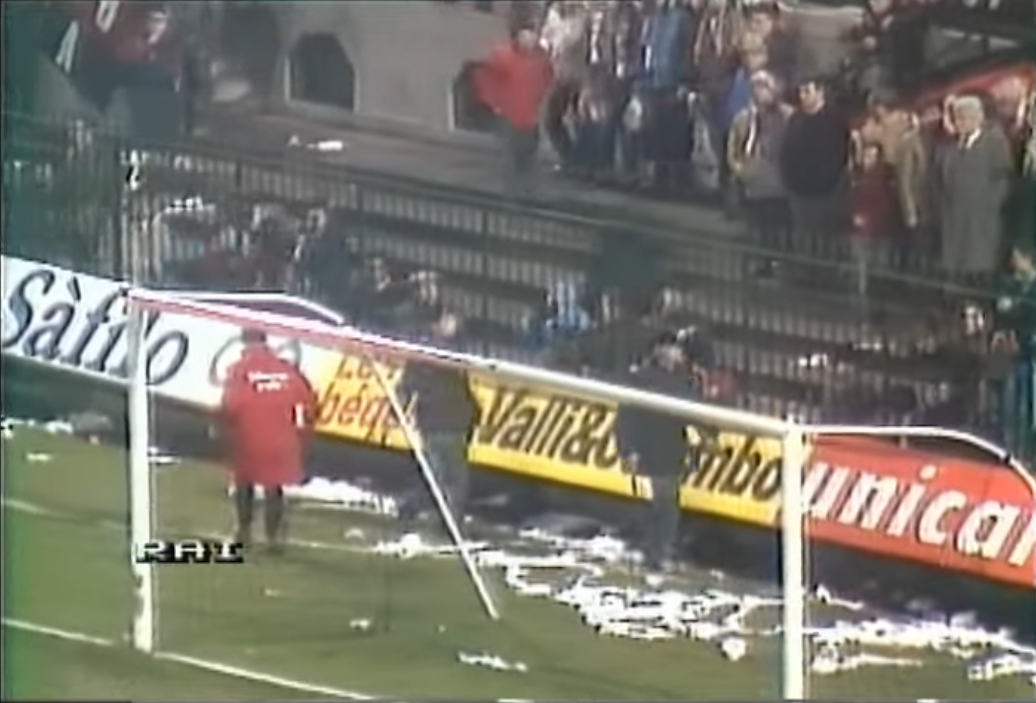 Philippe Desmet coolly slots the ball past a clearly encroaching Terraneo, who tries to point out some non-existent illegal movement by Desmet:

Again we get more banners in the background during the celebrations including a “Milan Club F.Baresi”, showing how much of a club hero Baresi already was by this point with 11 seasons left to go in his career: 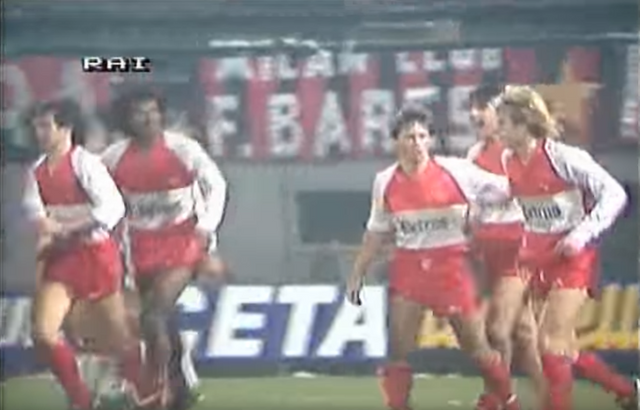 With the tie now level in both score and away goals, on 67 minutes the inevitable happens as Daniel Veyt scores yet again, his sixth in six UEFA Cup games:

Milan have no answer and 23 mins later, the final whistle goes. The Belgian bench stream onto the pitch to celebrate the massive upset and their greatest victory of all time:

More projectiles, one which appears to be a knife, can clearly be seen landing around the celebrations, as a despondent Ray Wilkins walks through: 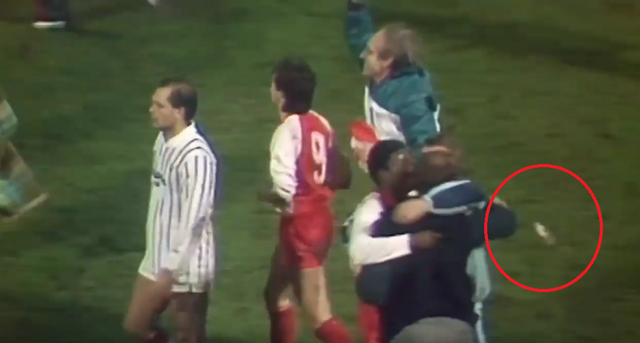 As the players walk towards the tunnel, supporters on the near side throw more objects with one clearly “threatening” a golf ball throw, while another throws something that narrowly misses a poor medical worker (who casually side-steps to his credit): 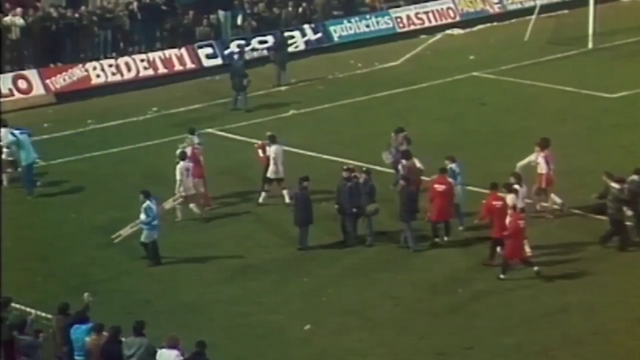 Waregem manager Urbain Haesaert uses his coat for protection as he leaves the field, perhaps unwisely walking ahead of the referee who of course is receiving the majority of abuse from the terraces: 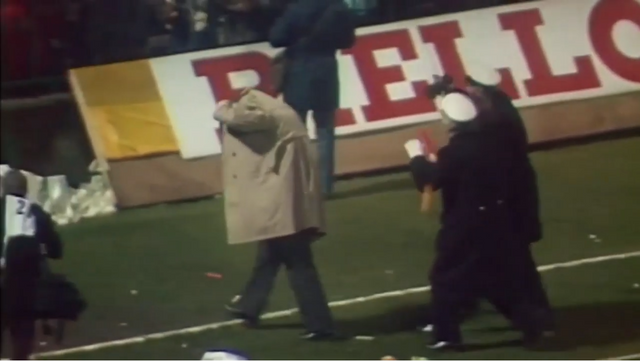 Despite no more goals from Veyt, Waregem went on to another fine victory in the quarter-finals, beating Hajduk Split on penalties before finally being defeated by 1. FC Köln in the semis. Unsurprisingly, it would turn out to be a club high point. In 1996 they were relegated to the Second Division, and again to the Third in 1999. Due to all-too familiar financial problems, the club ceased to exist in that form from 2001, replaced by a new entity SV Zulte Waregem – a “partnership” rather than registered merger with former lower-league side Zultse VV.

As for Milan, the projectiles incident, and specifically players being hit by them, resulted in disciplinary measures from UEFA: the club were banned from San Siro for the next two continental home games. This came into effect for the Rossoneri’s 1987-88 UEFA Cup campaign, with their first round-2nd leg against Sporting Gijón and second round-1st leg against Español both being held at Lecce’s Stadio Via del Mare.