Click here for all in the People On The Pitch series, in which we look at scenarios where supporters illegally ended up on the playing surface at matches. 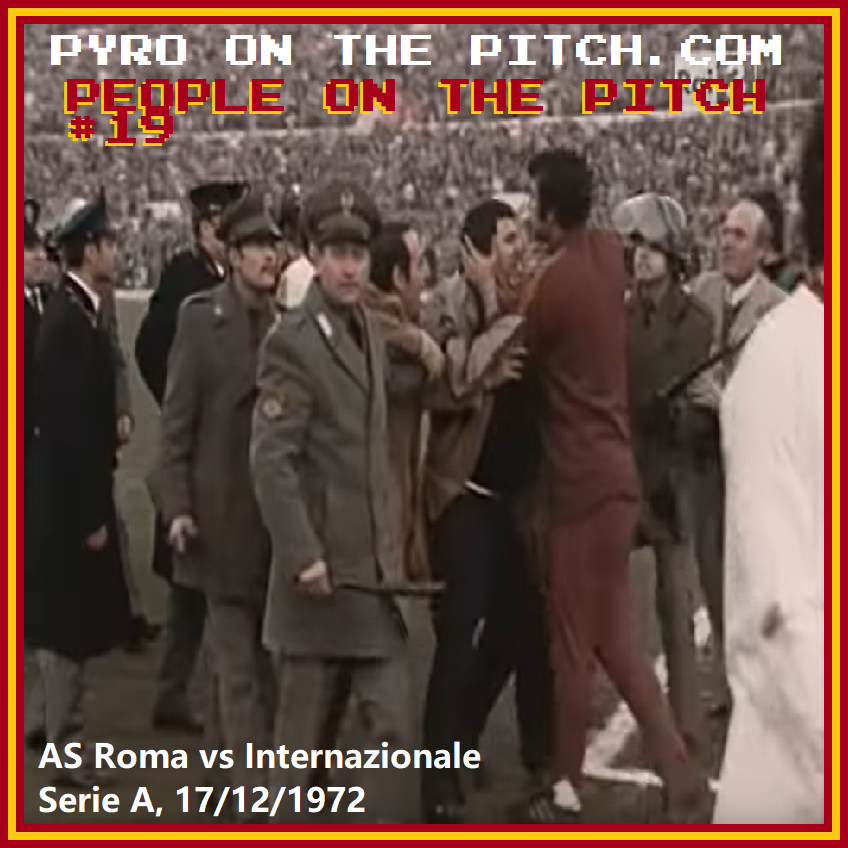 With a near packed-out Romanista crowd in the Stadio Olimpico on this December Sunday to welcome league leaders Inter (there’s no readily available attendance figures for most of the season, except the derby against Lazio which had drawn 84,000 the month before so this was probably similar), the score remains at 0-0 heading towards 90 mins:

But then Roma’s Giorgio Morini fouls Inter’s captain Sandro Mazzola on the edge/way into the area and referee Alberto Michelotti – a lower-league player as a goalkeeper himself in the 1940s and 50s – blows his whistle and points to the spot:

The tifosi on Curva Nord behind this goal are outraged, as from their vantage point the foul itself did not take place in the actual box:

The penalty is taken…and scored, 0-1 Inter. The atmosphere turns:

Immediately, Roma’s hardcore supporters are handing-off their brass instruments and such and heading for the pitch to confront this injustice:

The forces of peace and security rush to the scene with some fans already getting on:

Other individuals are injured in the chaos:

The referee is escorted off the pitch, while others furious fans continue to run on towards him…:

…before being led away in hysterics:

A winter sky sets the backdrop behind Curva Nord’s scoreboard while the situation plays out, with helmeted riot police now on the scene:

The riot police beat supporters back into the curva:

The ref is hurried through the caged-tunnel toward the innards of the huge stadium:

Those nearest the tunnel soon start destroying it:

At least one person is seriously injured and can be seen dragged away by the police:

With what little of the match that was left now abandoned, the crowd eventually disperse from the stands but more clashes with police occur outside the ground, as a fire remains the evidence of the incidents inside:

Inter are later awarded the game 0-2: