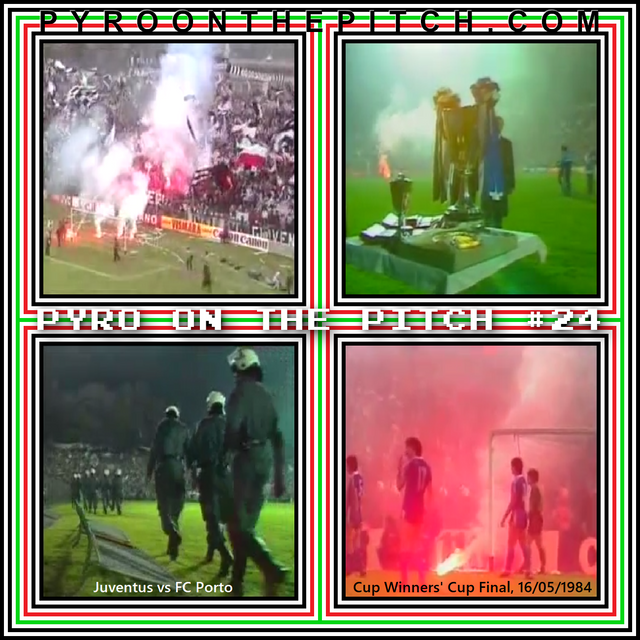 The road to Basel 84 – the 24th Cup Winners’ Cup final – began all the way back on 18 August 1982, when Juventus played a 1-1 draw away to Catania in Group 6 of the first round of Italy’s oddly-formatted domestic cup competition. Entrants to the Coppa Italia at the time were divided into eight groups of six, playing each other once across August and September. After wins at home to Pescara on 22 August; away to Genoa a week later; and at home to Milan on 1 September, another draw away to Padova to end the group on 5 September meant Juve progressed in top spot, with Milan taking the other qualifying position.

From the round of 16 of onward (known in places like Italy as the “eight-finals”, logically as the one before the quarter-finals), the ties were two-legged affairs and Juventus continued their cup campaign in February 1983 with a 1-0 win at home to Bari on the 9th, and a 1-1 draw away on the 23rd. Amazingly, it wouldn’t be until June that the competition again resumed when Juve beat Roma 3-0 at home on the 1st and 0-2 away three days later to progress to the semis. These would begin on 11 June when the Old Lady defeated Inter 1-0 in Turin, and concluded on the 15th when a scoreless draw in San Siro meant a first Coppa final appearance for Juventus since 1979 when they had beaten Palermo in a one-legged tie held in Rome.

On 19 June 1983, the first leg of the final was held with the other finalist Hellas Verona hosting in their Stadio Marcantonio Bentegodi. Shockingly Verona, who were still a couple of years away from winning their first scudetto having in fact won nothing up until this point and were only promoted from Serie B the year before, won 2-0 to bring a good lead into the second leg. This took place on 22 June in Juve and Torino’s Stadio Comunale, and after only 8 minutes Paulo Rossi found the net to give the home side optimism. It wouldn’t be until 81 minutes when another of their international superstars, Michel Platini, scored the equaliser to level the tie and send the game to extra time. It looked like penalties until again Platini broke Veronese hearts at the death of 119 minutes, scoring to win the Coppa for Juve’s 7th time.

The 1982-83 Taça de Portugal meanwhile, Portugal’s domestic cup competition, was a far more straightforward affair of knockout, single-leg ties all the way through. FC Porto began their campaign in the second round with a 6-0 win over lower-league Palmelense on 7 November 1982, followed by a 0-4 win away to Clube União de Coimbra on 8 December in the third round and 5-0 at home to FC Famalicão in the fourth on 23 January 1983. They finally conceded a goal at home to S.C. Espinho in a fifth round 3-1 victory on 20 February, and then defeated their first top-flight opposition Braga 3-0 on 2 April in the quarter-finals to make it to the last four. It was only now that they’d have their biggest win of the run, beating the other Coimbra team, Académica de Coimbra, 9-1 on 8 May to progress to the final with style.

Their opposing finalists would be 1982-83 league champions Benfica and huge discussions took place as to where to hold the match; eventually Porto were given home advantage with their Estádio das Antas being chosen. However, the one odd thing about this cup was that the final wouldn’t take place until 21 August 1983 after the new season had already started (and after Juventus had already began playing their 83-84 cup games). Ultimately, being the away side didn’t hinder Benfica as they ended Porto’s great cup run, winning the game, the trophy, and the double thanks to a 1-0 scoreline. But the fact that this was a double meant they were already going to the European Cup, and so the Cup Winners’ Cup spot was always going to go to FC Porto.

The 1983-84 Cup Winners’ Cup began three days after the Portuguese cup had been decided, when Swansea City took on 1. FC Magdeburg in the first-leg of the preliminary round on 24 August 1983. The first round proper started the following month on 14 September, with four two-legged ties standing between the competitors and the final in Switzerland in May. Juventus were drawn with Polish cup winners Lechia Gdańsk, while Porto received Yugoslav cup winners Dinamo Zagreb. The Italians got off to the far better start, defeating Lechia 7-0 in Italy before securing the tie with a 2-10 aggregate score after winning 2-3 in Poland on 28 September, while Porto lost 2-1 in Croatia and only progressed on away goals thanks to a late 85 minute 1-0 winner at home.

Porto’s second round was near identical, having been drawn against Rangers and losing 2-1 in the first leg on 19 October 1983 before progressing on away goals thanks to a 1-0 at home on 2 November. Juventus were drawn with PSG and progressed thanks to a 2-2 draw in Paris and a 0-0 in Turin. In the quarters, the Italians were granted by far the most forgiving fixture with Finland’s FC Haka who had progressed further than any Finnish club would be expected to. Juve’s goal to nil results in both home and away legs though, on 7 and 21 March 1984 were expected. Porto meanwhile faced the more daunting proposition of Soviet cup winners Shakhtar Donetsk, with a tight first leg going to the Portuguese 3-2. Having been one nil down in the return game in Ukraine, a place in the semis was rescued thanks to a late equaliser from Irish international Mickey Walsh to win 4-3 on aggregate.

The semi-finals turned out to be a British-battle for both Latin clubs – Manchester United for Juventus, and Aberdeen for Porto getting their second taste of Scotland in the competition (Aberdeen qualifying as CWC champions in 83). The first legs took place on 11 May 1984, with Man Utd holding Juve to a 1-1 draw in Old Trafford while Porto beat Aberdeen 1-0 in Portugal, a score they would repeat in Scotland on 25 April to secure a place in their first ever continental cup final. Juve were made to sweat a bit more for their return to a grand stage only a year after being defeated by HSV in the 1983 European Cup final. Again at 1-1, they were looking destined to go to extra-time with United until Rossi made it 2-1 on the 90th minute to send them through 3-2 on aggregate.

With a less than five hour drive from Turin to Basel up the A5, the majority of fans in St. Jakob Stadium, home of FC Basel, are naturally hopeful of a Juve win:

Although there is tifo activity all around the ground, one end in particular is notable of the banner of Juve’s famous Fighters ultras group, among others:

It is from here as the players are coming out that we get the first instance of pyro on the pitch, which deems the match eligible for this series:

Satisfying our need for interesting kit tidbits (click here for our Kit Interested series), both clubs are in their away kits here since usually both would be wearing dark and white stripes, although both are now in blue shorts:

With the players lined up, the amazing sea of flags from the crowd elsewhere in the ground can be seen in the background:

Back at the “curva”, more pyro comes down. One nearly reaches the end-line markings, but even landing on the grass surface alone is enough for our criteria:

Rossi, Platini and co await kick-off with the great scene in the background:

One section of the Bianconeri end which is repeatedly shown features a Polish flag, clearly for the other international star of the squad Zbigniew Boniek, interestingly right beside a German Empire flag which is more being used for both colourscheme and political message:

Of course one corner of the ground is also packed with Porto fans, but the camera only shows them during a lull for now:

At the other end, perhaps tipped off by the large banner with the word “Fighters” on it, a line of riot police can visibly be seen standing on front of the Juve ultras at all times:

Glimpses of other group banners such as Indians and Gioventu can occasionally be caught:

Plus, a Bronx Genova one along the side:

Juventus open the scoring on the 12th minute through Beniamino Vignola. Back on the terraces we see another Juve wavy which appears to be a black and white USA flag, but is actually the flag of Brittany:

António Sousa equalises for Porto just before the half hour mark to send their flags waving too…:

…but on 41 mins, Polish Boniek scores another for the Italians to send the black and white terraces crazy:

The same section is shown as the ref blows for half-time…:

…as well as other sections…:

…and then back to that one:

Mid-way through the half an Irish element is introduced, as Mickey Walsh comes on for Porto (unfortunate that Brady had already left Juve by this point):

A Swiss policeman with an umbrella tries to deal with it while the Swiss riot police look on:

With no more goals and the clock ticking down, a steady stream of additional riot cops begin to arrive at their appointed spots in anticipation of the final whistle and are seen in several shots:

The fans around the ground eagerly anticipate the end of the game too…:

…with several more Polish flags among the black and white ones:

With flags again waving all around the ground…

…the final whistle eventually blows to manager Giovanni Trapattoni’s relief, somewhat putting to bed the European Final defeat of the previous year with this his own first continental trophy win. In the stands behind him is another Indians banner, for the Colico section of the group:

We’ll leave the pictures to speak for themselves for the rest, including one more pyro on the pitch instance, as the Juventus fans and players celebrate their second continental cup triumph after the 1977 UEFA Cup: