Click here for all in the People On The Pitch series looking at a different pitch invasion game each time. 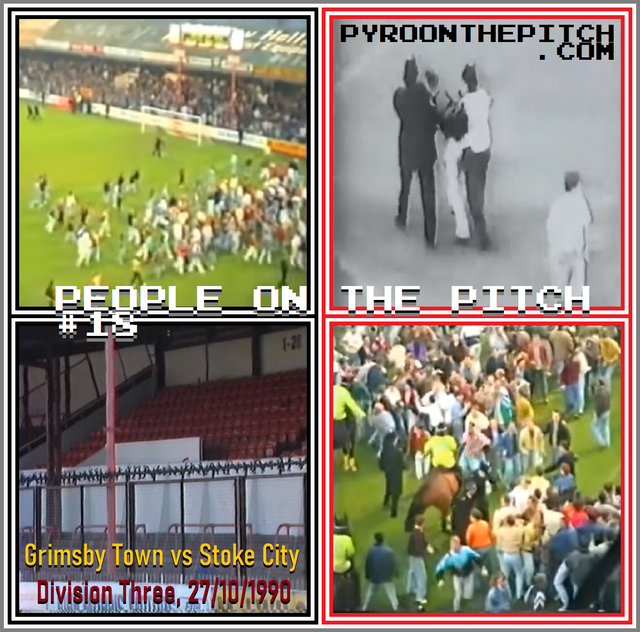 Grimsby Town enjoyed a brief golden age of top flight football from the 1920s to the 1940s, with a 5th place Division One finish in 1934-35 being their highest ever. But by 1990, The Mariners were in their seventh stint as a Third Division club since then.

While the rave/E/acid boom of the late 80s/early 90s is generally credited with “relaxing” the hooligan scene of the previous two decades, crowd trouble incidents were still more common in the lower leagues. With plenty of teams from areas with “hard” reputations around, opponents like this for Grimsby and their “Grimsby Hit Squad” firm in 1990-91 included: Birmingham City and their infamous “Zulus”; Bolton Wanderers and their “Cuckoo Boys” (a name adopted from a newspaper error); Bury; Swansea; and of course Stoke City and their “Naughty 40”, which at its height comprised of lot more than 40 members (reportedly over 700).

Unlike Grimsby, Stoke had spent most of their history as a first or second tier club, with relegation from Division Two at the end of 1989-90 seeing them drop to Division Three for only their second season ever, and first since 1926-27. Still, when The Potters travelled to Grimsby’s Blundell Park a couple of months in, it wouldn’t be an unfamiliar meeting. The pair had been in Division Two together for 1985-86 and 1986-87, and during the latter also played out an exhausting three matches for a twice drawn FA Cup 3rd round tie throughout January 1987.

Above is part of an empty away section where the Stoke fans will later be housed, with a menacing, barbed fenced. But in the wake of Hillsborough, for safety reasons most of the ground is not contained.

We join the action, now with more than 10,000 in attendance, as the final-whistle sounds on a 2-0 victory for the home team. As the players approach the tunnel, a large number of home fans come on the pitch…:

…and head towards the packed away end:

Several policemen struggle to stop the swelling Stoke mass of lads bursting through a gate, with one who had already slipped out taken down by the copper on the right:

The Grimsby supporters enjoy themselves on front of the seething horde behind the fences:

A couple of taunters (seen in progress above) brazenly go right up to the gate, with one of the other copper’s leaving the gate-pushing to take down one of the these as well:

While this is going on, other Stoke fans are realising there is nothing stopping them coming back around the other side of the stand to the corner, where there is no real fence. A lone policeman tries to discourage them:

Eventually, too many come around and the copper is helpless to stop the breach:

The Grimsby mob quickly head towards that corner also:

At this point the video cuts, and returns a short while later with now only Stoke fans inside “their own” 18 yard box. The gate is also now unmanned, presumably as the police were too stretched, and the rest of the away mob pour through freely:

But once numbers are enough, the Stoke fans spontaneously charge:

Hand to hand combat breaks out around the half-way line:

One Stoke involved gets nabbed:

…and several individuals instances around the pitch amid the chaos:

According to one comment on YouTube, the main Grimsby firm had already left before the end of the game and only knew of what was happening on the pitch when outside. Take that for what you will, but by this point the Stoke fans are taking up the majority of the centre of the pitch:

The hapless police try to shepherd them back to the away end:

However, more Grimsby on the near side come into direct contact. One policeman stuck in the middle losses his hate:

At last, back-up arrives in the form of a police horse unit who intervene…:

…and provide a much better shepherding job than the mere solo humans:

With many more still watching on from within the Stoke section, the pitch invaders contentedly head back:

The other side of the stand is the favoured option for exit, rather than through the bottleneck of the gate:

Meanwhile, an unlucky handful of the hundreds that were on the grass are taken away for arrest: