Welcome back to the feature with the most annoyingly long, but obviously necessary series-title in retro football blog history. Probably not in video game history though. What is for sure is that gameplay means zilch here. Last time, you may remember some lush screens, lush graphics, and some chillingly unrealistic kit configurations that were possibly the result of an in-game alternate timeline dystopia situation.

But now we’re going to revisit a gentler and slightly less lush time, and the very first game we featured in this series, Tecmo’s European Championship 1992 for PC-DOS. In APMFVGFH#1 we had a look at the team-select screen with it’s handsome array of 16bit flags and kits, but since APMFVGFH has evolved since then, the game is definitely worthy of another look as it has a lot more old school goodness to offer. The game opens with the delicious, classic title screen above that just drips DOS. Blue and green SHALL be seen! And while we referred to this as a gentler time compared to Champions World Class Soccer’s future hell-realm (we would rather die than see Italy play in green, white and red), the “grey void” of the would-be terraces and soulless mechanical landscape surrounding the stadium seems to indicate a similarly worrisome time in simanity’s alter-history.

Then comes another intro screen, definitely gif-worthy, with flags (always a plus) scrolling along the top and the Tecmo rabbit logo, which conveniently basically doubled up as the beloved and legendary European Championship rabbit mascot, the greatest mascot of all time in any discipline. The rabbit had debuted at Euro ’88 and was called Berni by the Germans, before being blatantly plagiarised by the Swedes who cunningly renamed him “Rabbit” to cover their tracks.

Next, as already covered  in the aforementioned episode, the great team-select screen: 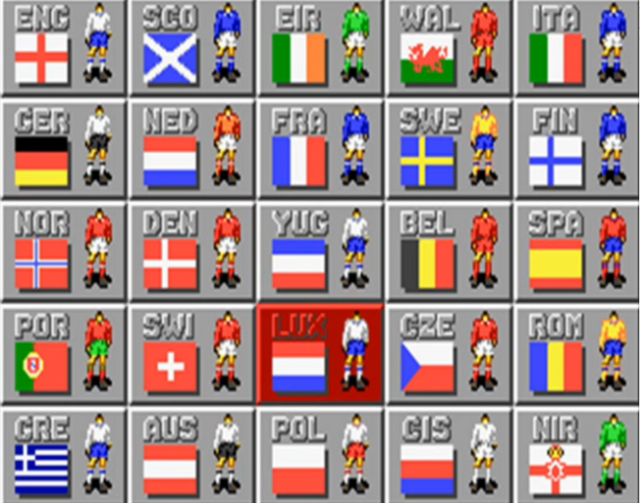 We go straight to pitchside and a look at the teams coming out now, in this case Germany and England: There is a lot to love here with player’s tunnel, athletics track, vibrant crowd, and Germany in their green away shirts (a POTP favourite), as well as cheerleaders which is not so realistic or necessary, but the effort is there. The fact that Tecmo is a Japanese company lets them away with it in our eyes, but photographers and officials in place of the cheerleaders could have been a welcome improvement.

Edit: At least that’s what we thought until we were smartened up by blog reader Lucas, who is fast becoming a invaluable fact checking resource:

About the cheerleaders part, it wasn’t made up by Tecmo. From what i remember, in UEFA EURO 1992 matches in Sweden (at the time when the game was developed), before the kick-off, there were two groups of cheerleaders on each side of the tunnel when the players were entering in the pitch. (as you can see from this photo from the final between Denmark and Germany in Gothenburg)

Thank Lucas, once again we gladly eat humble pie with this correction and as always welcome any and all contributions for stuff we may have missed.

It is now half-time and we have a lovely touch that we really appreciated, as a marching band parades across the pitch playing a military like tune. The attention to detail is excellent with smart red and yellow uniforms and simulated trumpets, flutes, tuba, triangle and, of course, the band leader with their baton, all on show: Of course as always where possible, we must highlight the virtual crowd and we get a great shot of them down near one of the corners, patiently awaiting the arrival of the players (it’s a different match). As video game football crowds go, it really is a beauty: And now for the pièce de résistance, one of the greatest things ever placed in a video game. We have long been campaigners (as in enthusiastically describe it’s potential with friends and loved ones) for the inclusion of VERY occasional fan rioting interrupting video game football matches. Rarer still, sometimes matches would have to be abandoned due to said trouble, merely for the sake of realism.

While we don’t quite have a riot, or any real “trouble”, there is an instance of, if not hooliganism, definite supporter disobedience with an immediate police response required. That is because at times in this game when a throw-in is being taken, a supporter breaks from the terraces and invades the pitch, fully nude, shortly thereafter chased by an irate policeman:

As you can see, the streaker boasts an impressive pubic region and appears to be a Caucasian male of athletic build. The players and officials don’t seem to care too much, barely taking notice, as in 1992 supporter encroachments were as normal and accepted as your standard, old pyro on the pitch. Indeed the inclusion of the Easter egg proves the expectation at the time for some sort of incident involving fans at any given game.

Just for kicks, we can make it appear there is in fact a full firm of angry, naked hooligans pouring out from their enclosure: As this edition of APMFVGFH comes to a close (which considering the above could really have been covered as a special, virtual edition of People On The Pitch), we will leave you with these shocking scenes, the disgraceful example of which perhaps being the ultimate childhood impetus for many of today’s football thugs. Amazingly we are not quite done reviewing European Championship 1992’s aesthetically pleasing moments, of which there are clearly many, but the rest will have to wait for another aesthetically pleasing day.