Plunging head first into APMFVGFH time warp once again, this edition takes us to the heady days of the late 90s and early 2000s as we look at a groundbreaking series that straddled the millennia. 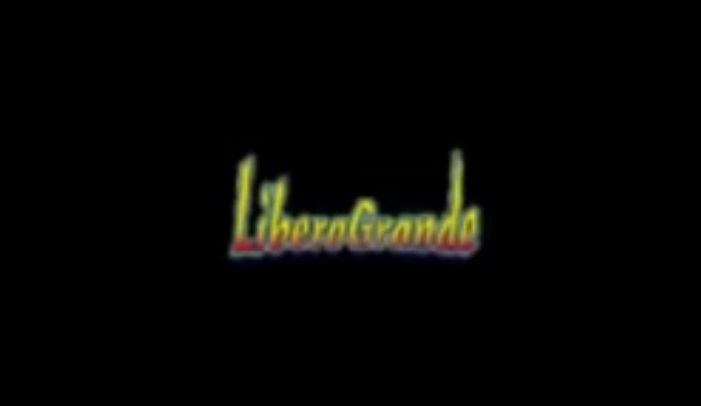 If it wasn’t clear from the blurry, vague image above, in this edition we are highlighting both LiberoGrande – released by Namco for the PlayStation in 1997 – AND LiberGrande 2: International –  released in 2000.

The name of the latter suggests that the series had expanded from clubs to also include national teams, when in fact national teams are all that’s playable in either game. But the main point was players rather than team, as instead of playing as a whole XII and continually controlling who was on or nearest the ball, as in most conventional football games, LiberoGrande demands the gamer select one world-class player to control for the entire match.

Having originally appeared as an arcade title, “libero grande” itself translates to “free big” in Italian, referring to the historic calcio position of libero (sweeper), and implying that the game gave the player more freedom than ever before. While nothing spectacular in terms of gameplay (as far as we recall), luckily we care not one jot about that in this series and over both games there are some funny and genuinely impressive moments.

For one thing, like International Superstar Soccer the actual player’s names are not allowed appear due to licensing reasons, and the 21 playable “characters” and 10 unlockables are all parodies, often with unintentionally hilarious results. But we always love some fan action in the coded stands also, and thankfully this game provides more of it than most.

After the title screen, the intro video immediately sets the tone for what this game is going to be like:

Later in the intro, it appears as if the game is being played in an ancient crumbling stadium, or one that’s been bombarded. Some commendable Danish banner hanging is also visible: 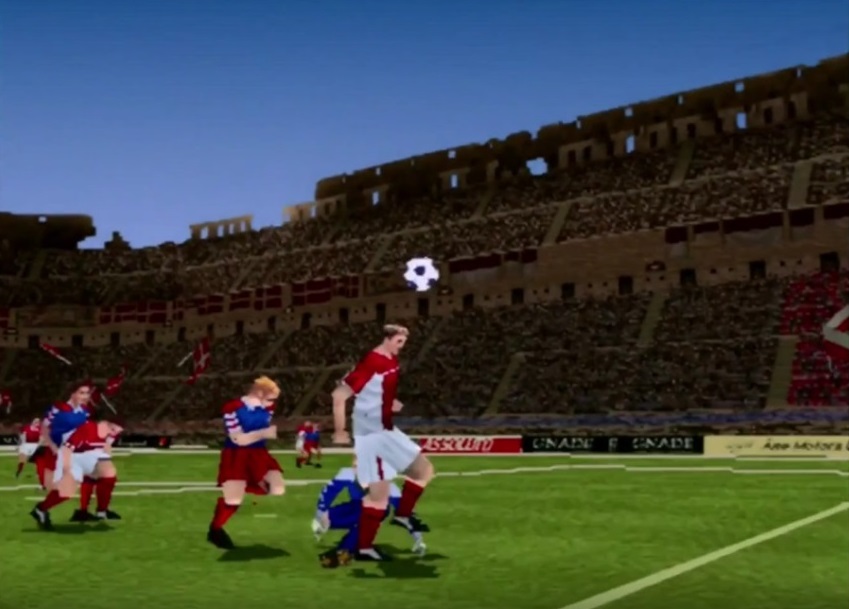 Before getting to a match, the gamer must select their player which includes a snap shot of the legend’s face. The real life equivalent of each is fairly easy to figure out, and a full list can be found on the LiberoGrande Wikipedia page, but given the Japanese origins of the game it is not surprising that many of them turn out like anime characters.

First is Raimundo, the friendly N64 Legend of Zelda villager:

Then there’s the inflatable Alfred Shaffer from England: 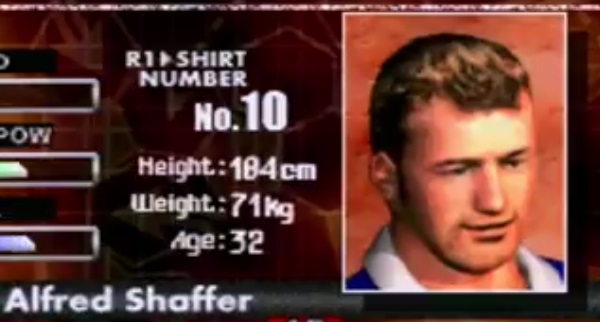 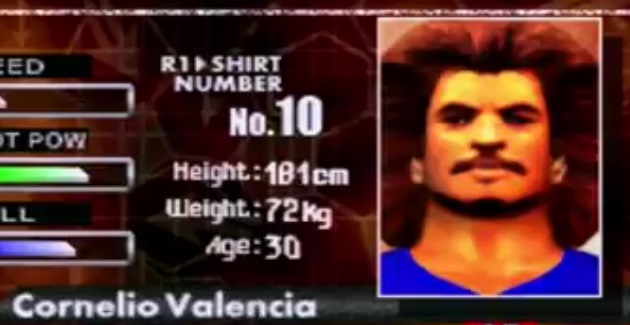 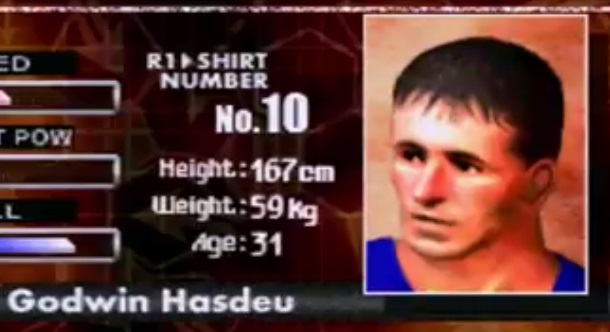 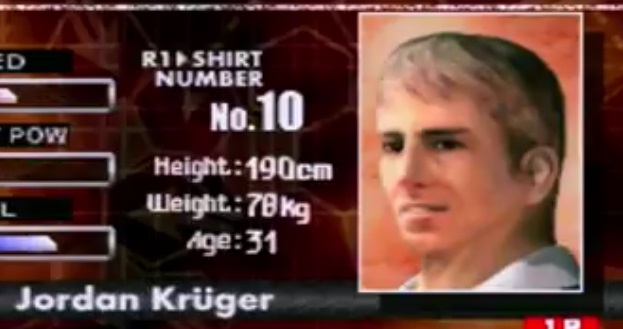 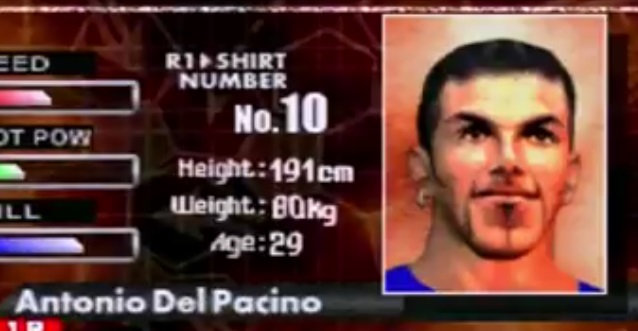 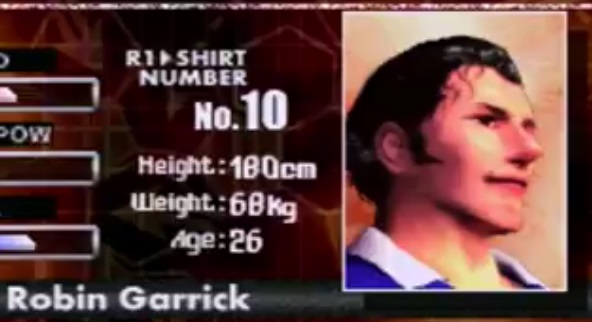 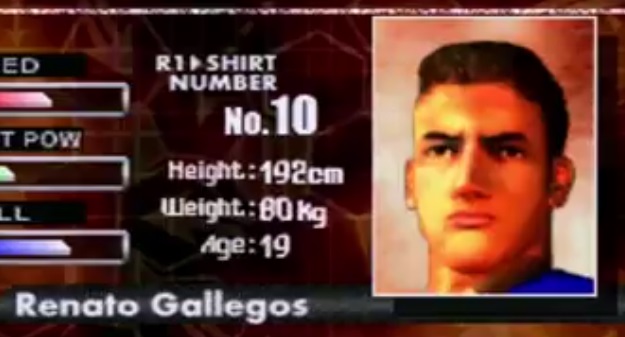 And the only Serbian ever to have an “x” in his name, Dormen Smixolovic: 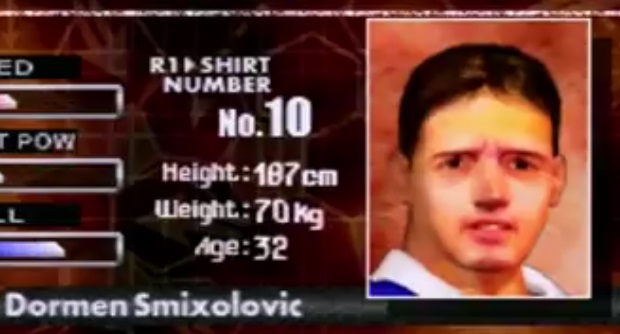 Some other interesting name choices include the combination of Oliver Bierhoff with an 19th century emperor, creating “Oswald Bismarck”; Andreas Möller going Ducth to become “Ajax Möbius”; Romario’s metamorphosis into a keyboard – “Roland”; and they transformed George Weah into “Gerald Wells”, an accountant from the American mid-west.

Another sidenote from the Wikipedia page is that someone thought it important enough to include the  “Flags indicate national team as defined under FIFA eligibility rules. Players may hold more than one non-FIFA nationality.” just in case the FIFA rules-audit people are skimming through old football game pages.

At last we come to the teams emerging – in this case the Netherlands and USA (the angle of the camera at first makes it appear as if the flags and country names are aligned to the wrong side, but this is rectified as the camera spins around). Immediately the eye is drawn to the crowd in the background as we see flares, strobos, tifo flags, and banner hanging from the Dutch supporters: 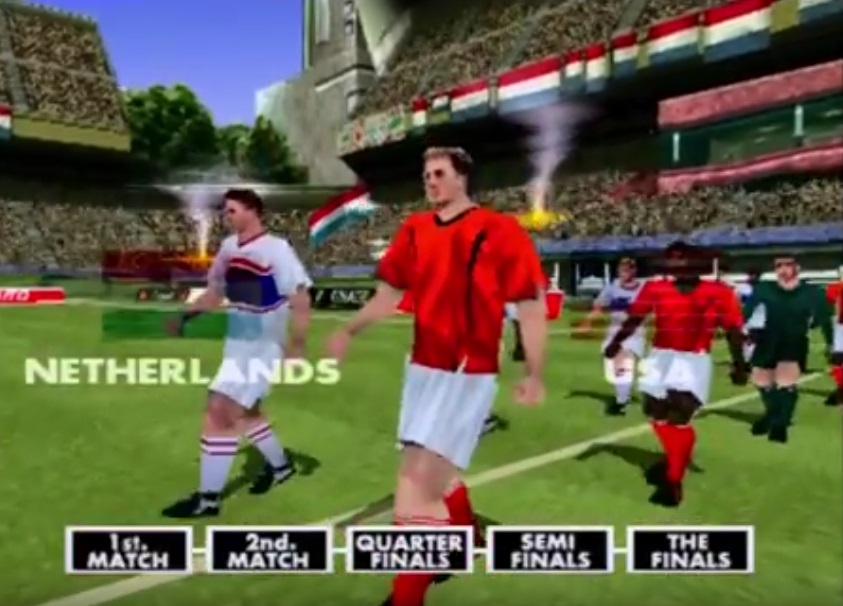 The pyro looks even more impressive for night games, and who better than Italy’s virtual ultras to demonstrate:

One thing we love in soccer simulators is when your players crumple the ground pathetically upon conceding a goal or being sent off, and happily, this is the case here. Upon France scoring against Italy early in a friendly game, an intensely huge “GOAL” scrolls along as the whole Italian squad drop to the grass to cry and pound the pitch, and ask God why they were born: 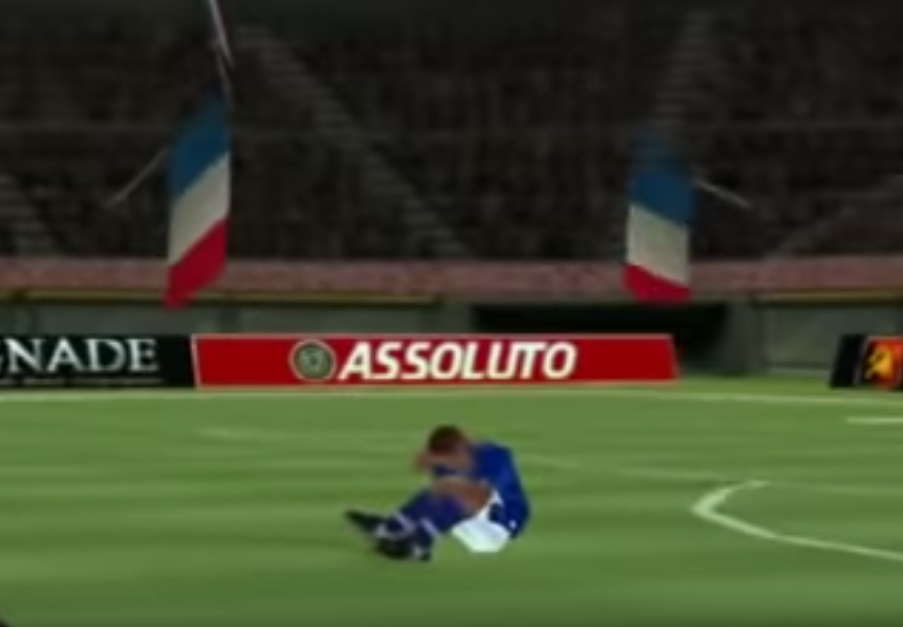 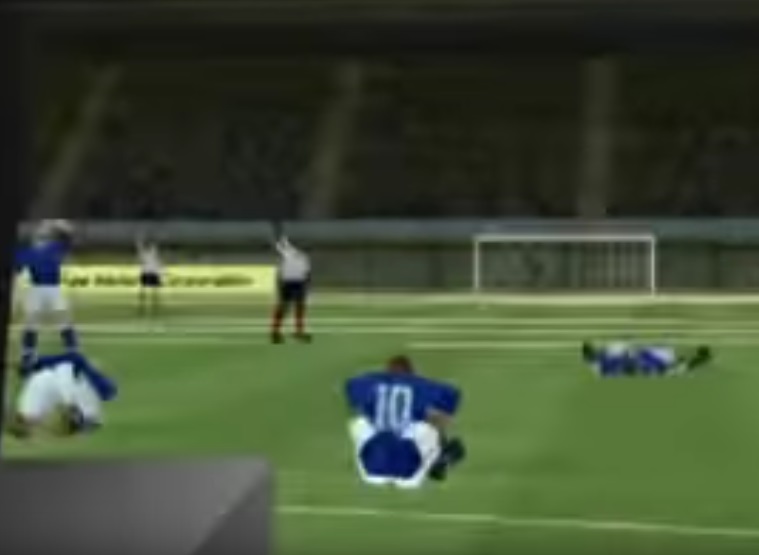 In the background, a quite disturbing celebration is taking place between two French teammates, who are engaging in unholy communion through some sort metaphysical alien bio-technology. But in quite a lovely kit: 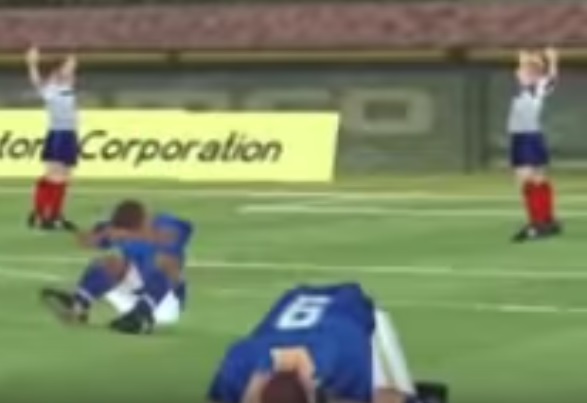 You may have noticed above that the wavy flags continue around the pitch in the crowd, with four behind this goal alone: 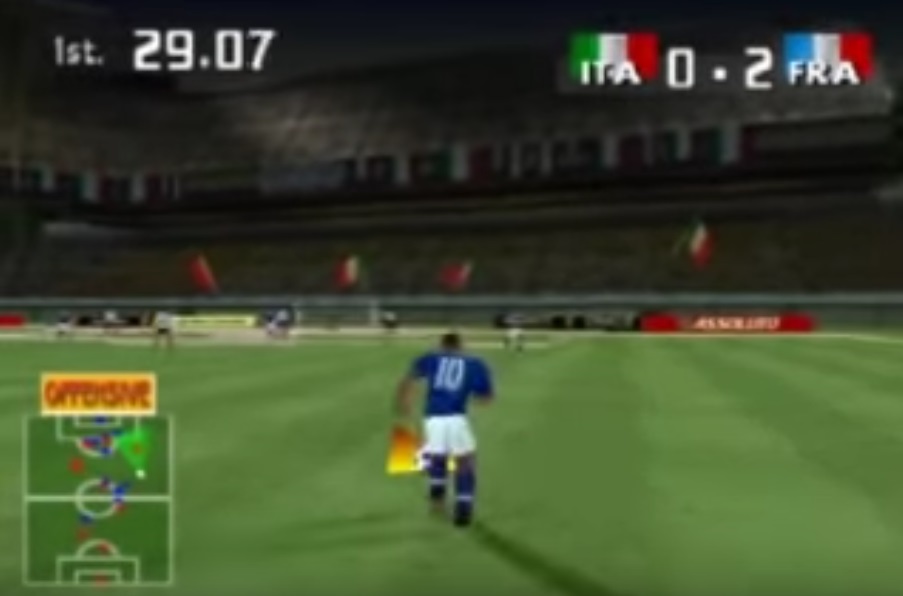 Getting a closer look, the flags are quite massive with the white pole a pleasing touch, although the flag appears to be waving itself: 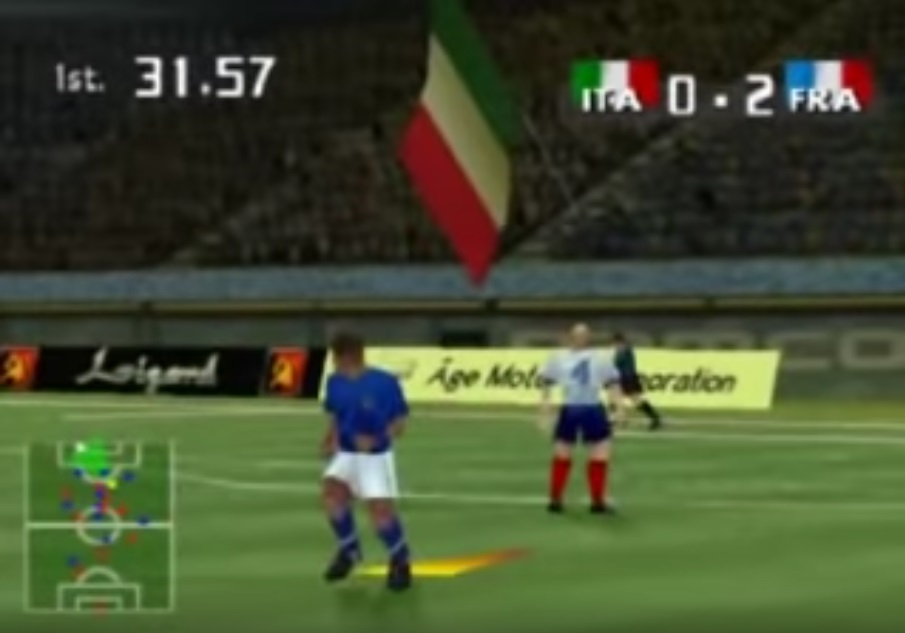 Moving on to LiberoGrande 2 as it was known in Japan, or LiberoGrande International in Europe, the game for the new millennium had an updated, clean look that we love: 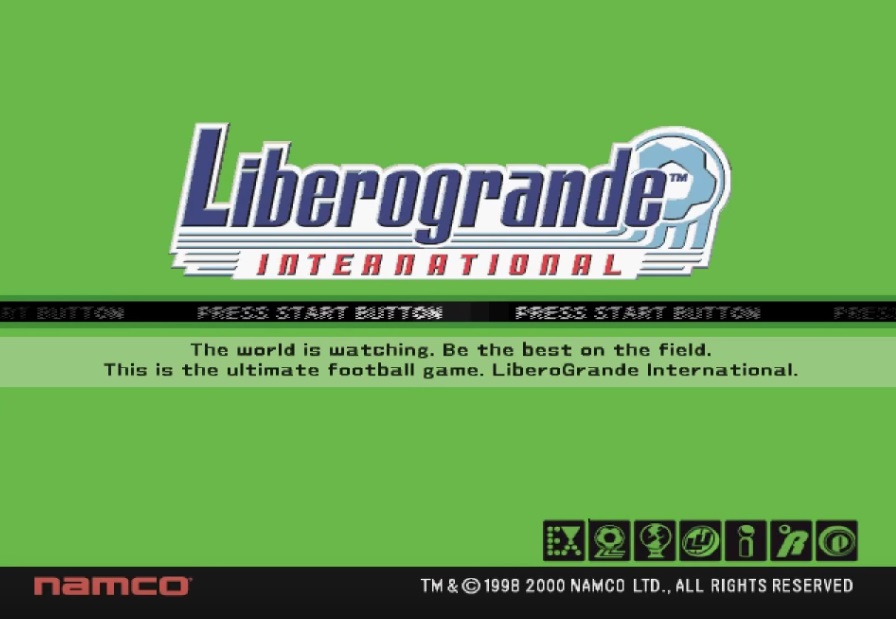 As the caption says: “This is the ultimate Football game”. As in the last one ever? Here’s some more nice screens: 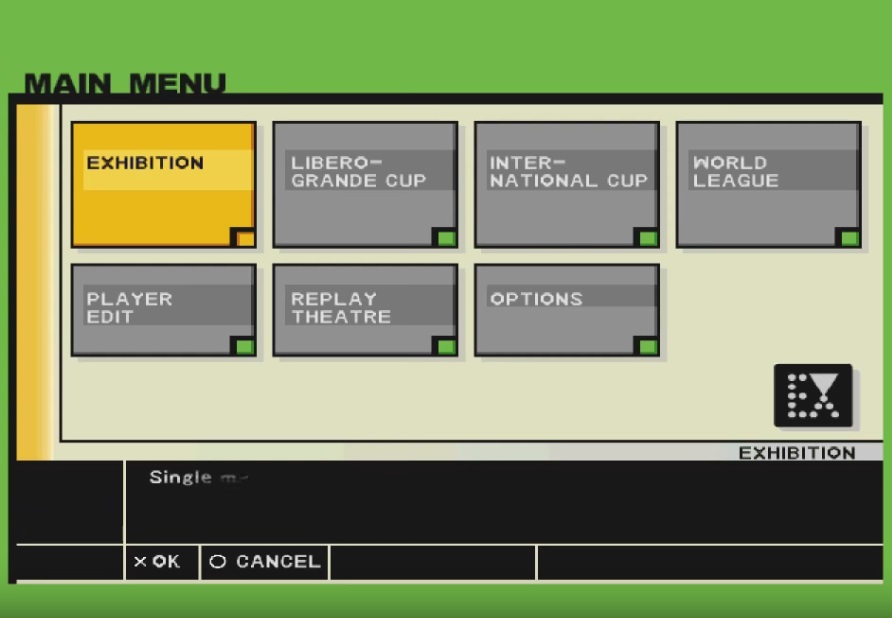 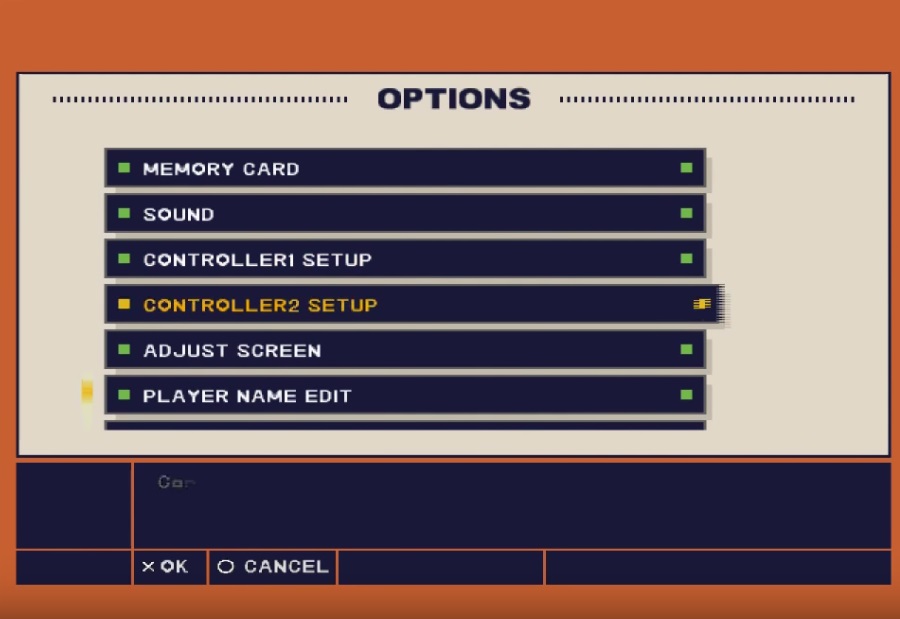 Libero 2 switches things up by focusing on the country first, rather the players. The team select screen is also great, with four elegant globes above the national flags: 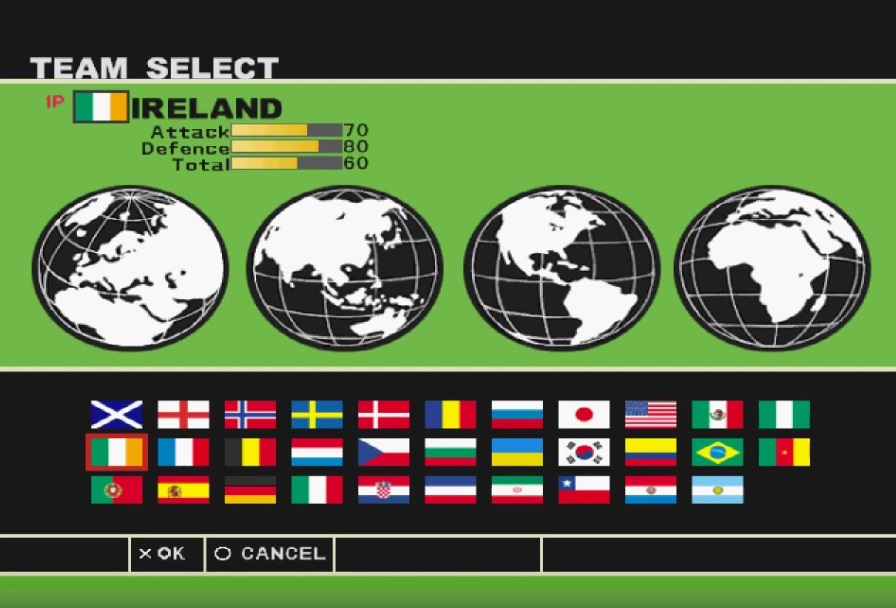 Once you have your team the player then is selected, and this time it can be any of them. Here a nice Portugal kit is on display: 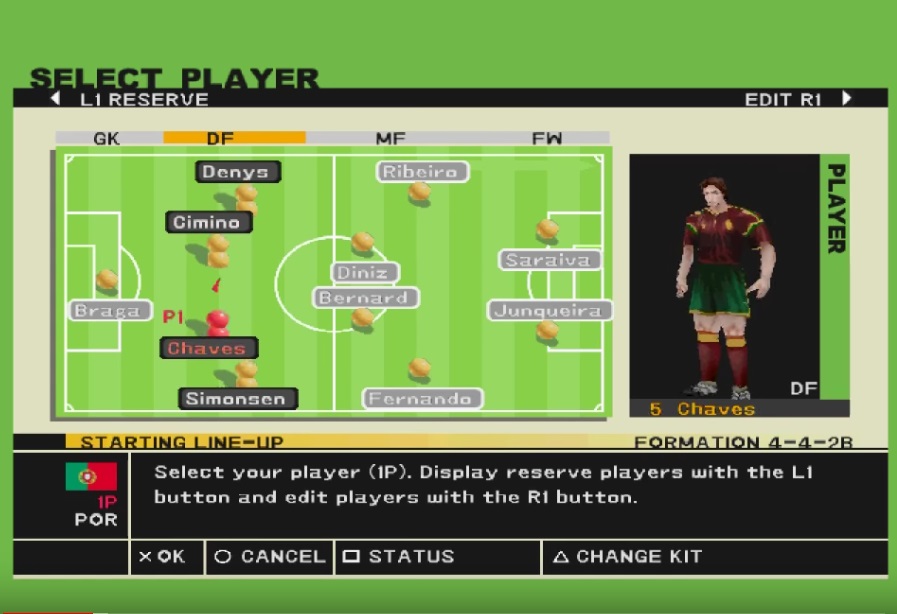 Lastly, we come to a match between Sweden and Germany in the San Siro. As the teams emerge, we see an immense traveling mob of Swedes in mostly black jackets with banners, flags, and bouncing in unison. The slight time delay between the rows creates an amazing effect:

It is one of the greatest scenes in any football video game: 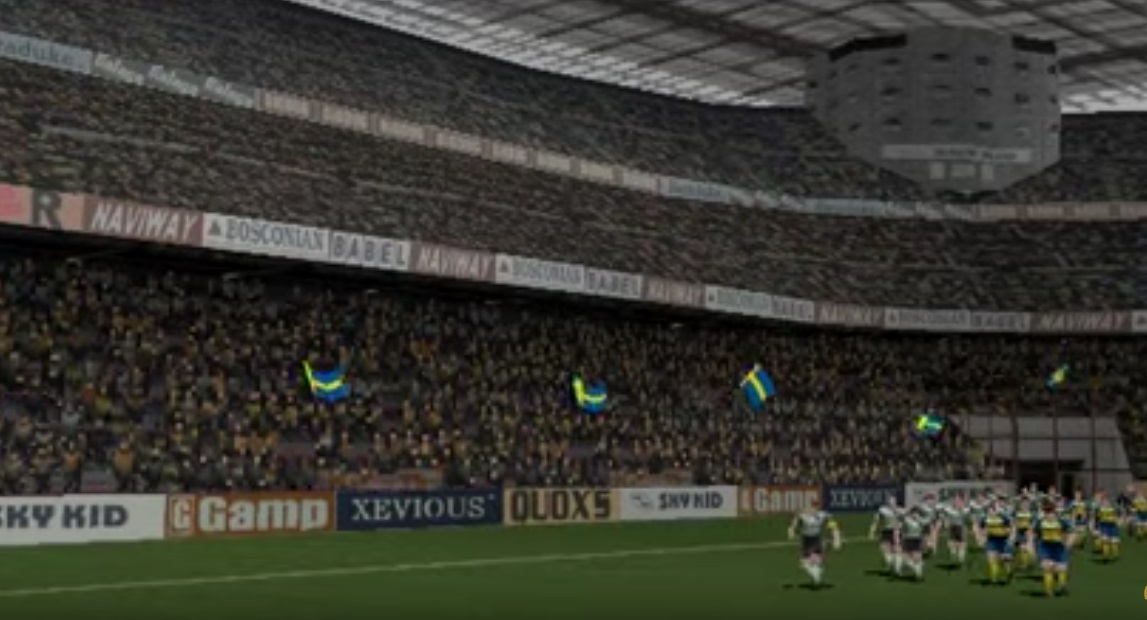 LiberoGrande 2 would not be the ultimate football game, but it would be the ultimate game in the series. The idea of controlling a single player may have seemed boring and pointless to some at the time, but it was later adapted by both the Pro Evolution and FIFA series, showing that Libero really was a trailblazing legend of a game.